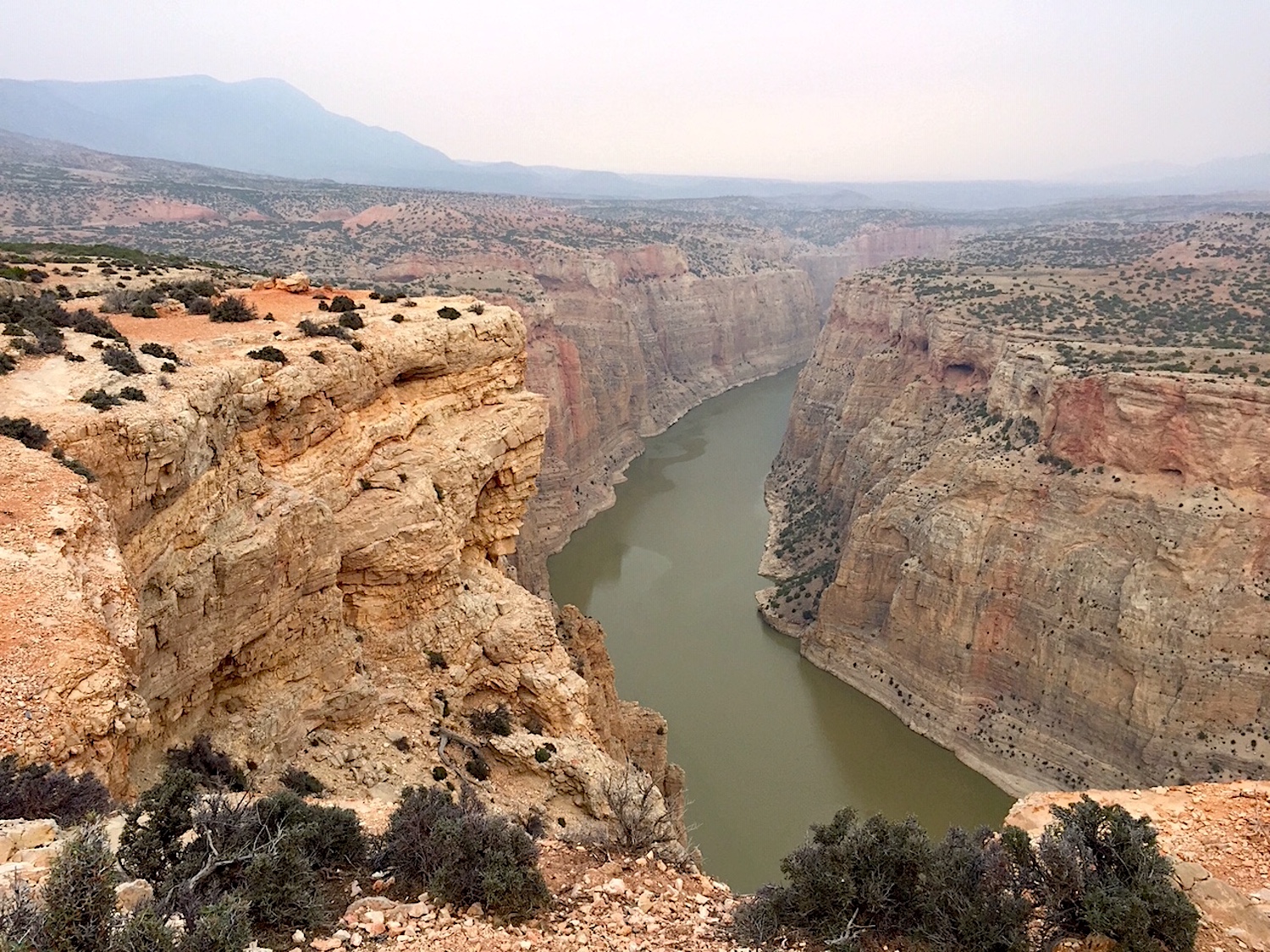 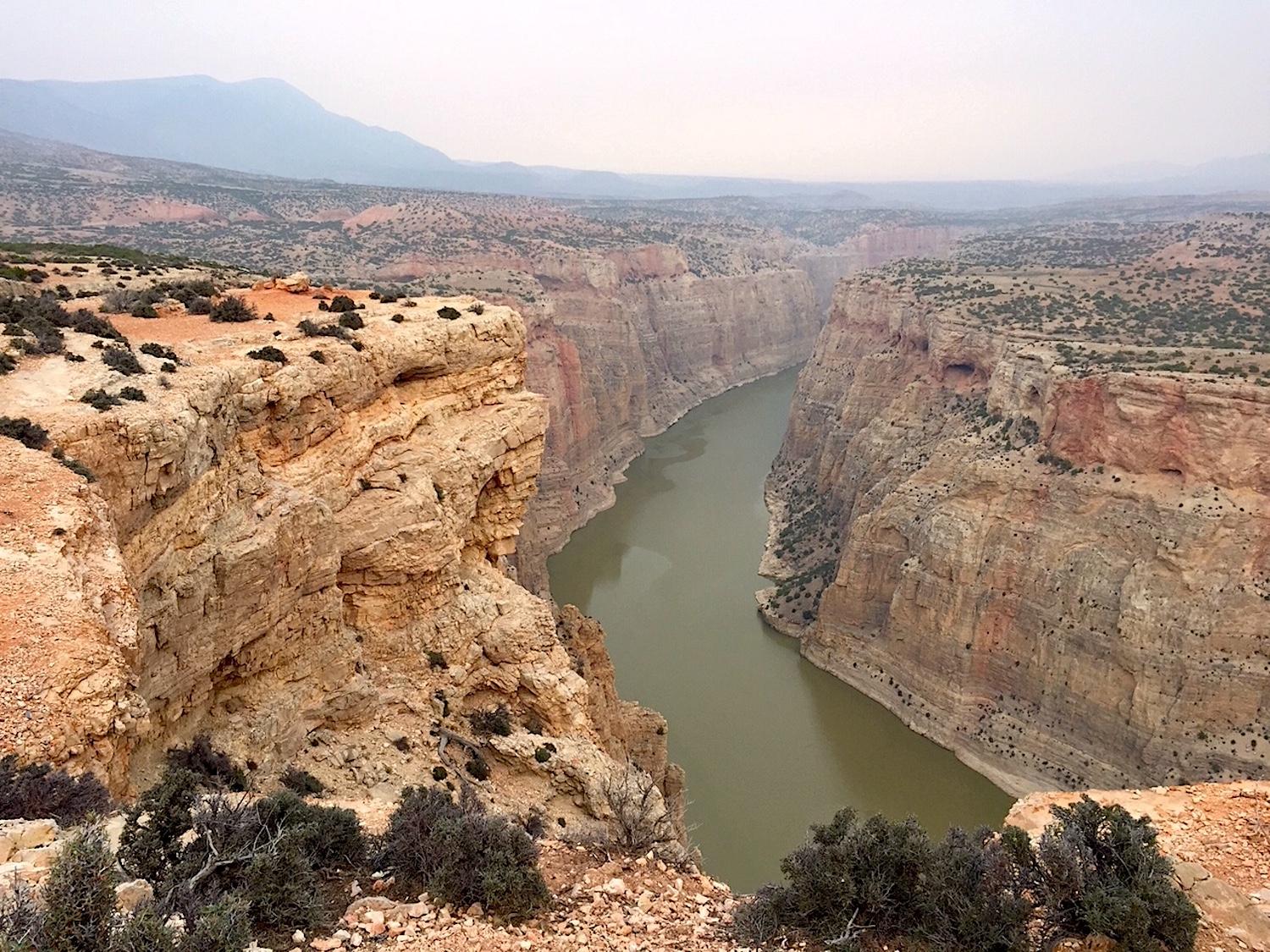 A Smoky Trail Across The Country

Here at the border of Wyoming and Montana, Bad Pass Trail is all but invisible to me. It winds across the upper reaches of the Pryor Mountains through Bighorn Canyon National Recreation Area. Road signs note I’ve crossed the trail, but I cannot see it stretching 50 miles from the Shoshone River to Grapevine Creek. On either side of the narrow highway, loose shale is strewn in precarious stacks, a treacherous footing, slides held in check only by roots of saltbush and juniper. What pass for trail cairns look flattened, scattered; I would not try to find my way alone, not across these high badlands, following this historic route that blurs before my eyes like the wisps of smoke overhead.

I find myself irritated. Again. I am sick to death of smoke.

It’s a bad pass I’m on, a bad trail I’ve been following, for months now. Or rather, it’s been following me: a trail of wildfire smoke. It started almost as soon as I loaded my camping gear into my car and headed west from New Mexico in May.

At Flagstaff, I turned off I-40 toward Walnut Canyon National Monument. Ancient people built cliff dwellings here, in part because Walnut Creek once flowed through the canyon. Gone now, the water and the people. Hiking on the nearby Arizona Trail overlooking the parched monument, I pitched my tent on tinder-dry grass in the Coconino National Forest. I should have noted my crackling footsteps.

Next day, I drove down Oak Creek Canyon, passing through scenic Sedona, and Prescott, across Valle Verde and up to Jerome, an old copper mining town purported to be haunted, buildings clinging tightly to the steep cliffside of Cleopatra Hill. I blew past Jerome’s ghosts, unintimidated, cruising over a high pass.

West on I-10, I crossed the Mojave Desert near Joshua Tree National Park, just over the border in California. The namesake yucca trees that survived last year’s Dome fire appeared dry and distressed.

But maybe that was due to the thick haze of smoke directly in my path as I entered the Sierra Nevadas. California’s Lake Fire, May 27, 2021: that’s when my fire-dodging started.

I reached San Francisco by a circuitous route, then drove down the Coast Highway, into the hills to Portola Redwoods State Park to find the ancient trees. I expected the area to be foggy, the forest to be dripping wet, primeval. The trees, the path, were dry. The blue sky of summer stretched white, with clouds … I hoped.

May 30, the Sargents Fire began: Big Sur was burning. There was no going back the way I came. I had planned to travel up to Eureka, then swing southeast as I was leaving the state to see Lake Tahoe. But I had a bad feeling. Small fires were popping up in Northern California. By June 9, a brush fire took hold on the north shore of Lake Tahoe. It was the first of multiple early blazes near the lake. Soon, the massive Dixie Fire and explosive Caldor Fire would choke the lakeshore with heavy smoke and force evacuations. 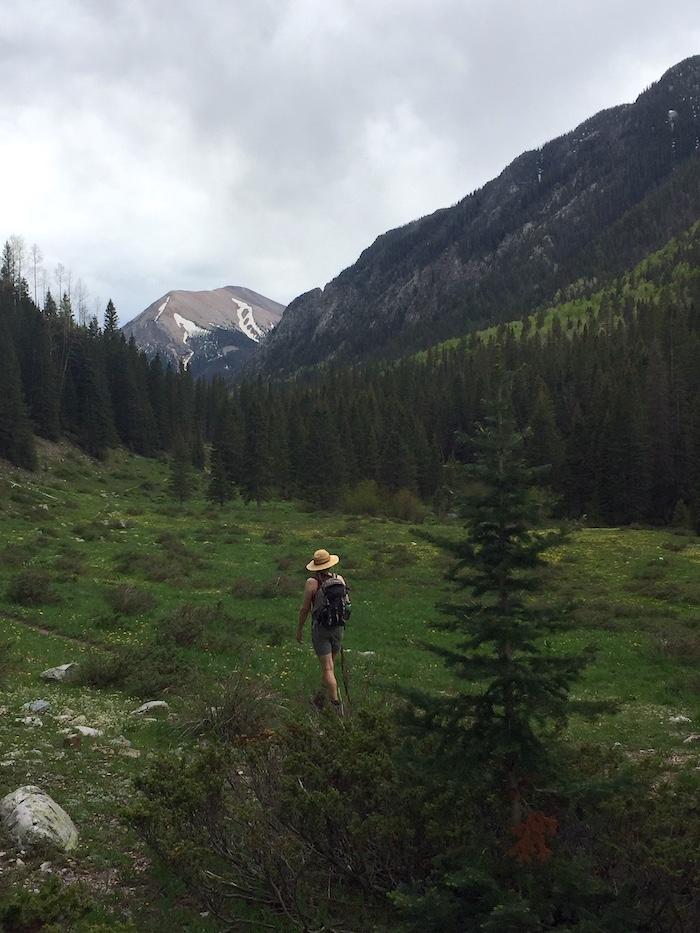 So I ran from California, back through Arizona. June 18, the Rafael Fire was discovered already burning 1,000 acres in the Prescott National Forest near Flagstaff; two days later, it had grown to over 18,000 acres.

Returning to New Mexico, I tried to go hiking with family from out-of-state. First, I wanted to show them the beautiful Gila Wilderness at Gila Cliff Dwellings National Monument, where I had backpacked along the Gila River and soaked in hot springs in December. Fires burned.

I thought I’d take them into the Pecos Wilderness in Santa Fe National Forest to hike on Mount Baldy. Fires burned.

We veered north, into Carson National Forest, up the Santa Barbara Trail to hike and camp along the Continental Divide. In the middle of the second night, we woke up coughing, and hiked down in the morning with bandanas covering our mouths and noses, like bandits trying to steal oxygen from the choking air. Not even my namesake patron saint could stop the fires.

In July, I traveled to Colorado to see my sister. I had given her a guidebook for the Continental Divide Trail for Christmas. An avid thru-hiker herself, with delight she had mapped out our first 10-day trek together, planned and prepped since January.

But as we drove from Fairplay toward Leadville, we pulled over and admitted defeat. The staggering view of massive peaks was all but obscured by wildfire smoke. Heeding the warning of Santa Barbara, we returned to Fairplay, hatching a new plan over burgers and beers on a café patio, the smoke-filtered sunlight coloring the map spread before us a sickly pink-orange.

In his May 10, 2021, article for Yale Climate Connections entitled “Silent calamity: the health impacts of wildfire smoke,” Bob Henson pointed out the very real dangers we faced. The tiny particulates that tint the sunlight and set me coughing in the mountains are linked to increased risk of respiratory and cardiovascular illness – and death.

An October 2020 policy brief from Stanford researchers put the death toll from wildfire smoke – not from the fires themselves – at 5,000–15,000 people annually in the United States, and much higher in heavy fire years. Like last year. And this year, which has started much worse, thanks to the ongoing megadrought and other effects of climate change.

From smoky Fairplay, my sister and I set off on a much longer road trip – to Cape Cod National Seashore. Full of relief and optimism, we fled the fires, stopping only for water: a bird sanctuary on Lake Erie, the roaring spray of Niagara Falls. And finally, the Atlantic Ocean, lapping at our bare toes as we walked the beach together. 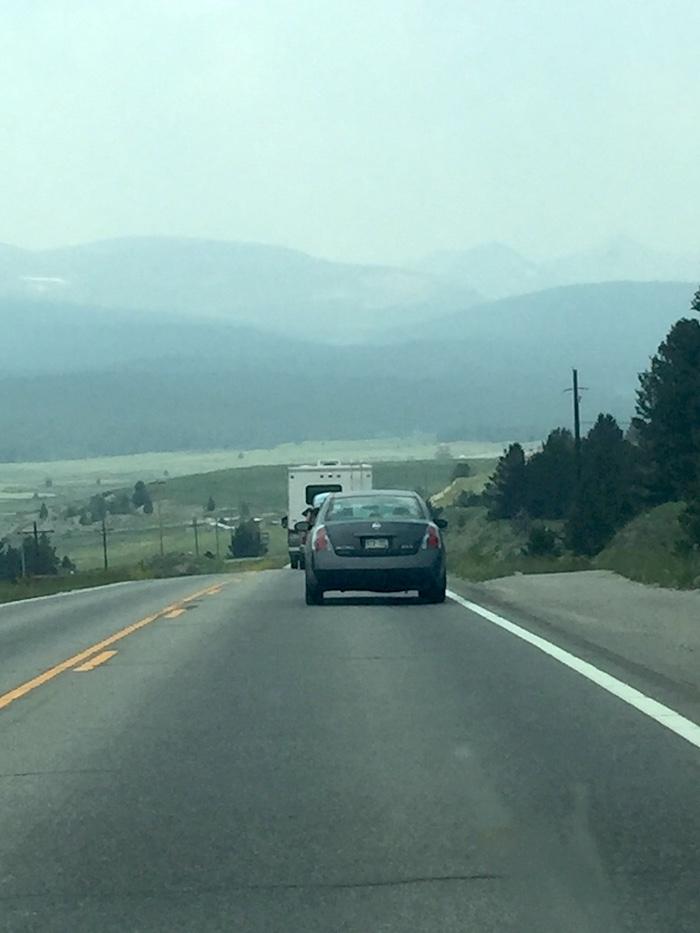 Smoke in and around Fairplay, Colorado, canceled a 10-day hike along the Continental Divide Trail/Barbara Jensen

But as we faced the car west to return home, here it came: the wildfire smoke. It had blown across the entire country. I couldn’t escape it. For three days, we drove home under smoky skies, growing more sober with every mile.

Now at Devil’s Canyon Overlook in Bighorn Canyon National Recreation Area, I stare down into the green water flowing through the soft limestone cliffs.

The Crow People tell tales of evil spirits here that push people over the canyon’s edge or lead them astray.

But these fires are not the work of evil spirits, or ghosts, and no saints will rescue us. We have created these climate-change effects. We have led ourselves astray, pushing ourselves over the edge.

It’s still smoky, in late-August, my eyes and throat burning as I look out across the canyon from Bad Pass Trail.

Barbara “Bo” Jensen is a writer and artist who likes to go off-grid, whether it’s backpacking through national parks, trekking up the Continental Divide Trail, or following the Camino Norte across Spain. For over 20 years, social work has paid the bills, allowing them to meet and talk with people living homeless in the streets of America. You can find more of Bo’s work on Out There podcast, Wanderlust, Journey, and  www.wanderinglightning.com