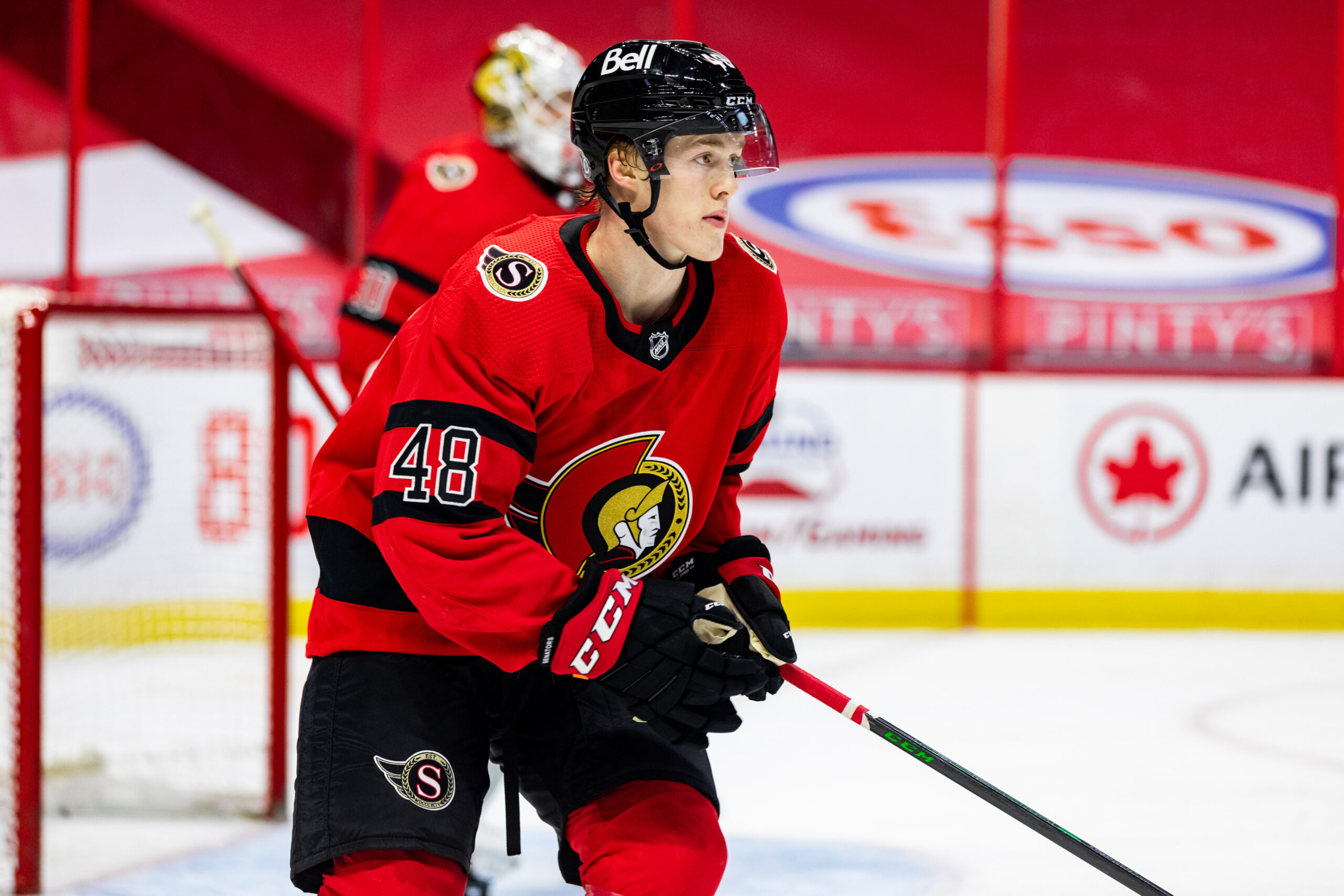 On Sept. 8, the Ottawa Senators announced their Rookie and Development Camp rosters, which will commence on Sept. 11 and run until Sept. 20, inviting 24 players who are all itching to solidify their spot within the organization. For some, it will reaffirm their status as top prospects within the organization, while others will get their first taste of professional routines and competition. There’s something in it for everyone, and after a season marred with delays and cancellations, it will be a refreshingly normal way to get the 2021-22 season rolling.

However, the Senators have a slight problem in that their roster is, for the most part, complete. There are only two forward and one defence position available for a rookie to potentially claim this season. It’s a big shift from 2020-21, where nearly every spot was up for grabs, allowing Josh Norris, Tim Stützle, Drake Batherson, and Artyom Zub to play big roles. But even those few positions are all but spoken for with Erik Brannstrom, Shane Pinto, and Alex Formenton looking like front runners at the moment. It would take a spectacular showing at camp for management to change their minds at this point, but that’s what camp is for, and anything can happen over the next week.

Who Will Fill The Last Defence Spot?

The Senators have one of the better defensive prospect pools in the NHL with several looking to break into the NHL in the near future. However, with the recent additions of Nick Holden and Michael Del Zotto, some prospects may have to wait longer than expected for their chance. As mentioned before, the slick puck-mover Brannstrom is expected to start the season alongside Zub, and he’s done his fair share of waiting, but there will be a few prospects who will have something to say about that.

The eldest and most experienced of those is Jacob Bernard-Docker, who will be participating in his third development camp. Drafted 26th overall in 2018, he’s slowly risen to the top of the Senators’ prospects thanks to his dominance at the University of North Dakota. Last season, he earned recognition as the National Collegiate Hockey Conference’s Top Defensive Defenseman and was named to the second all-star team.

However, this is likely Bernard-Docker’s last rookie camp, as he has proven he is ready to compete for a roster spot with the Senators. Last season, he made his NHL debut in April, appearing in five games as Ottawa closed out their season. He then was selected to join Team Canada at the World Championship of Hockey in Riga, Latvia, where he helped the Canadians capture the gold medal. Not many 21-year-olds could accomplish that in a single calendar year, but Bernard-Docker is no average player. The Senators are well aware they have a gem on their hands and they’ll try to find a place for him on their roster as soon as they can — but will it cost Brannstrom his place, or will he have to wait another season in the minors?

Fellow first-round pick Lassi Thomson will also be vying for the final defensive roster spot. Drafted 19th overall in 2019, he returned to his native Finland in 2019-20 after spending the previous season with the Western Hockey League’s (WHL) Kelowna Rockets. He always demonstrated top-tier puckhandling and skating, but his defensive game was underdeveloped. That wasn’t the case when he returned to North America midway through the 2020-21 season, joining the American Hockey League’s (AHL) Belleville Senators for 35 games after playing in the Finnish Liiga. He was a much more well-rounded player, putting up 13 points as an AHL rookie. While more of a dark horse to grab a roster spot right now, he still has the talent to be a top-four defender in the future.

Many will notice that Jake Sanderson, the Senators’ 2020 fifth-overall selection, is not in attendance. That’s due to the NCAA’s transfer rules that would negate his college eligibility if he played any professional games. While some college stars, like Bernard-Docker, do attend development camps before the NCAA season begins, many choose to wait until they’ve signed professional deals before they join the team. Defenceman Tyler Kleven is also choosing to skip this year’s development camp, as is winger and 2021 first-round pick Tyler Boucher.

While the WHL and the Quebec Major Junior Hockey League (QMJHL) found ways to return to play in 2020-21, the Ontario Hockey League (OHL) was never able to find a safe way around the provincial lockdowns, and thus they cancelled their season. It was a huge blow to many prospects, who had to either find another team to play for or skip out on competitive hockey for a full season. That was the case for both Ben Roger and Chandler Romeo, who were both selected in the 2021 Draft this past July. They’ll both be in attendance at the 2021 Senators Development Camp, though, giving them their first real taste of hockey in over a calendar year. It begs the question — how will they match up against players who were able to compete in 2020-21?

Of the two, Roger, one of Ottawa’s two second-round selections, will likely have a better camp. Prior to the league’s shutdown, the big defenceman played a full season for the London Knights, appearing in 35 games and scoring six points. Had the season not been cancelled, he would have seen a big jump in his ice time as stars Ryan Merkley and Alec Regula both departed to the pro ranks, leaving some big gaps to be filled. Roger has a bruising, physical presence, but needs to show more of a well-rounded defensive side. This camp will be the place to do it if he can keep up with the talented players around him.

Romeo may struggle more with the transition. The Senators’ seventh-round pick, he was just gearing up to play his rookie OHL season after spending the 2019-20 season split between the Ontario Junior Hockey League (OJHL) and Greater Ontario Junior Hockey League (GOJHL). The jump between the junior circuit and the OHL is a significant enough step, let alone going from junior to the NHL. He has decent skills, but there’s a lot of unknowns about him right now, and he’ll have to work extra hard to handle his first development camp.

There will be two other 2021 Draft picks in second-round selection Zack Ostapchuk and fourth-round selection Carson Latimer. As they both play in the WHL, they were able to dress for 22 games last season and were able to continue their development. Ostapchuk in particular looks ready to build on his seven-goal, 16-point season with the Vancouver Giants, having scored four goals in the Giants’ final training camp scrimmage. It stands to reason, then, that these players would be more prepared for the Senators’ camp, but will that be the case when the skates hit the ice?

Finally, there’s 18-year-old defender Ty Hollett and 19-year-old goalie Zach Paputsakis, two OHL players brought to camp on amateur tryouts. In most situations, players on amateur tryouts rarely earn a professional contract, but given their age and the fact that their development is mostly unknown, they have a real opportunity to surprise at camp.

Can Anyone Upset Shane Pinto as the Senators’ Top Prospect?

After joining the Senators late in the season, Pinto could not have had a better NHL debut. In 12 games, he put away a goal and seven points, giving him one of the highest point-per-game rates on the entire team. It’s made him an early contender for the 2022 Calder Trophy, especially with him currently projecting as the Senators’ second-line center. It wouldn’t be too much of a stretch to say that he’s currently Ottawa’s top prospect, but there are some who may challenge him for that title.

Left wing Ridly Greig could push for a roster spot as soon as this coming season. According to The Athletics‘ Ian Mendes, “I would suggest that Ridly Greig has a legitimate shot to make this roster out of training camp… [he] might simply force the organization’s hand to find a spot for him.” (from ‘Mendes Mailbag: Jerseys ads for the Sens, the hot Jake Sanderson debate and why all the afternoon games?’, The Athletic, 8/20/21) Picked 27th overall in 2020 with the selection acquired in the J.G. Pageau trade, he’s a proven sparkplug that doesn’t shy away from physicality, but also has strong offensive instincts.

Egor Sokolov is another winger who could push Pinto and Greig. After a dominant 2019-20 season with the Cape Breton Eagles, he joined the Belleville Senators and, as a rookie, led the team with 15 goals and 25 points in 35 games. Better yet, he seems to be one of the most likeable prospects in the Senators’ system thanks to his inspiring story of perseverance after getting passed over twice in the NHL draft, and his relationship with his billet family of Kyle and Ashely Ryan and their daughter Neico. A strong character player with high-end skills, it wouldn’t be surprising to see the 21-year-old sniper push for a spot as soon as this season.

Roby Jarventie is the dark horse of the group. The Finnish winger also made his AHL debut this season, joining the Belleville Senators after the conclusion of the Liiga’s season and scoring two goals and three points in four games. He’s been described as a modern power forward thanks to his deceptive strength, excellent shot, and blazing speed. He is the least likely to push Pinto for the title of top prospect, but if he adjusted to the North American game quicker than expected, then that could lead to some intense battles at development camp.

With the Senators looking to push for a playoff spot as early as this season, every prospect will have to earn their place in the lineup. Thankfully, there are still plenty of talented players waiting for their chance to make an impact. The only question remaining is whether they’ll be ready to do so this year or sometime in the future.

An elementary teacher by day and an avid hockey fan, Dayton joined The Hockey Writers in 2019 and currently covers the Ottawa Senators, World Juniors, and NHL Entry Draft.