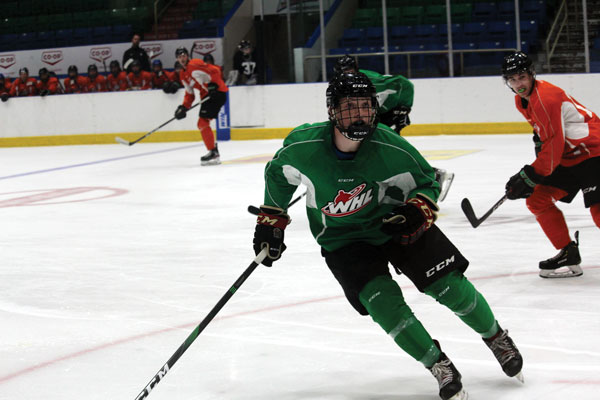 Since being selected by the Prince Albert Raiders in the second round of the 2020 Western Hockey League Bantam Draft, forward Harrison Lodewyk has been champing at the bit to take to the ice at the Art Hauser Centre.

The 16-year-old from Red Deer got to do just that on Thursday as the Raiders officially began their 2021 training camp with on-ice scrimmages at the Art Hauser Centre.

“I’m really excited to be here,” Lodewyk said. “It sucked that I missed out on training camp last year because of COVID-19, but I’m super pumped to be in Prince Albert and I’m looking forward to the rest of the pre-season.”

While Lodewyk was limited to just five games last season with the Red Deer Under-18 Chiefs due to the pandemic, he was able to get on the ice this spring as he took part in spring camp for the Alberta Junior Hockey League’s Blackfalds Bulldogs.

“That helped me out a lot as I was able to get back into the game and get used to everything after hardly playing for over a year,” said Lodewyk, who recorded four points for the Chiefs before the season came to a halt last fall.

“The biggest thing I’ve noticed so far in the scrimmages is the overall intensity out there. It’s crazy to see how much faster the game is, especially compared to the Junior A camp I went to.”

Prior to being selected 37th overall by the Raiders in April 2020 and inking a contract with the club shortly after the draft, Lodewyk recorded 33 points in 31 regular season games during the 2019-20 campaign for the Red Deer Under-15 Rebels.

“I was super pumped up to be picked by the Raiders, as they were one of the top teams I was hoping to go to,” Lodewyk said.

“I had heard a lot of good things about Prince Albert from fellow players. They have a really good program here and the guys with the team are always happy to talk with you and answer any questions that you might have.”

Lodewyk, who models his offensive side of the game after Connor McDavid but likes to focus on his defensive play, will be learning what it takes to play in the WHL over the next couple of weeks at the Raiders gear up for their season opener on Friday, Oct. 1 when they’ll welcome the Regina Pats to town.

“It’s important to test the waters during that pre-season games so that you can see what you can and can’t do out there,” Lodewyk said.

“I think the biggest thing I’m focussing on right now is just making sure that I’m slowing the game down and knowing what’s around me, in addition to keeping my head up and looking for the open play.”

There were a few notable faces missing from the Raiders training camp roster when it was released on Thursday morning prior to the team’s first scrimmage.

While the club is still in a holding pattern as to when Belarusian forward Uladzislau Shyla and netminder Tikhon Chayka will come to Prince Albert, returning forwards Matthew Culling, Logan Danis and Logan Linklater were not listed on the three scrimmage rosters, along with returning blueliner Graydon Gotaas.

“With our two imports, we’re still waiting on the Canadian consulate, so that’s been a bit tricky,” Raiders general manager Curtis Hunt said.

“With the other guys, after consultation with the players and their agents, we all agree that at this point in time it would be better to allow them to stay a little closer to home and then we’ll reevaluate things as we move forward.”

Forwards Ozzy Wiesblatt and Reece Vitelli are also not with the team at the moment as they are taking part in prospect camps for the San Jose Sharks and Arizona Coyotes respectively.

The Raiders have also announced that an Aliaksei Protas bobblehead will be available for fans to purchase during their pre-season game against the Saskatoon Blades on Friday, Sept. 24.

The Protas bobblehead, which is part of a series that includes Kaiden Guhle and Leon Draisaitl that came out earlier this year, will cost $10 and can be bought in the Johnny Bower Lobby.

As a result of the ongoing COVID-19 pandemic, Western Conference teams will only play against their B.C. and U.S. divisional counterparts for the month of October due to the current border restrictions that prevent non-essential bus travel from Canada into the United States.

“The WHL continues to work with government and public health authorities in each of the six provincial and state jurisdictions located in WHL territory to ensure the health and safety of WHL players, staff, and officials, as well as the communities in which the WHL operates,” the league said.

In other news, the WHL announced several rule changes for the upcoming campaign, the biggest of which will occur when the regular season gets underway on Oct. 1 as the coaches challenge will be available.

“A Head Coach can challenge a goal that he feels was off-side, with the decision to be determined by the video goal judge in consultation with the linesman,” the league said.

“There are three possible decisions the video goal judge can make following the review: Disallow goal, reset time on score clock and face-off outside the blue line, Allow goal and assess bench minor to coach for requesting the challenge and Inconclusive video replays, therefore, the goal is allowed and no penalty.”