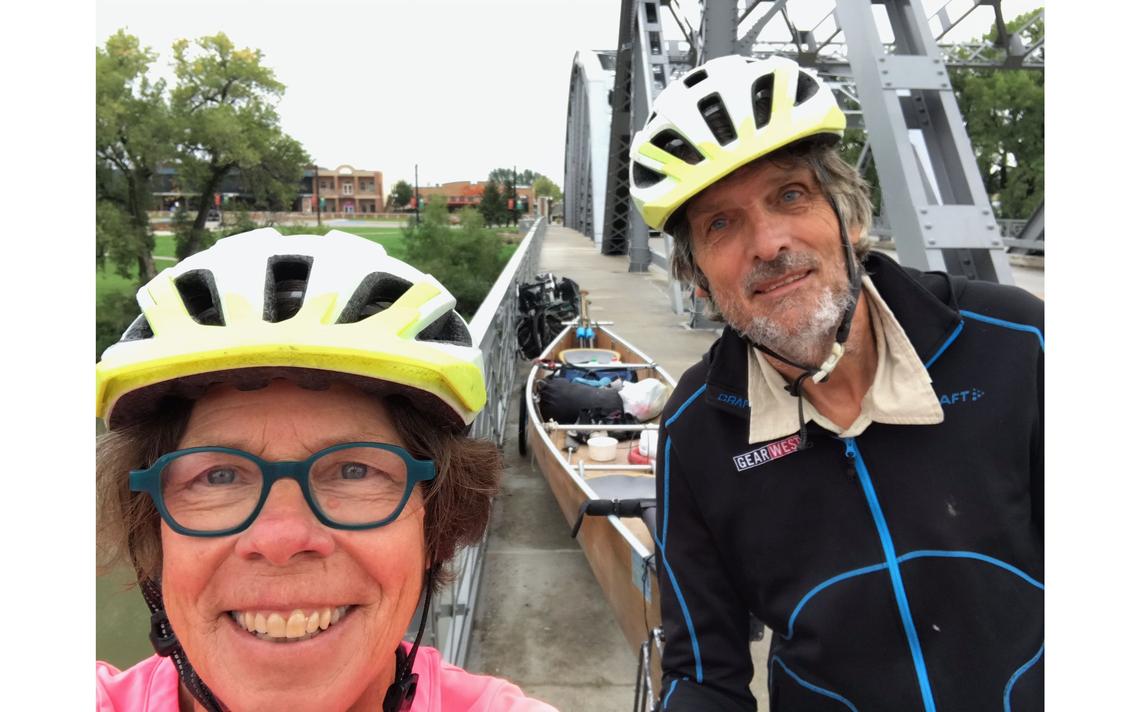 Since then, they’ve pedaled or paddled across southern Minnesota on an east-west route that eventually took them to the Red River and north to Kittson County near the Manitoba border in far northwest Minnesota.

Wednesday night, Aug. 8, they were camping in Warroad, Minn. Their goal is to reach Rainy Lake sometime in the next week or so.

The trip to this point has been “really good,” Tony Mommsen said Wednesday night by phone from Warroad. To date, they’ve paddled 325 miles and biked 802 miles at estimated speeds of 3 mph by water and 7 mph by bicycle. The goal is 20 miles daily by canoe and 40 miles by bicycle.

“I said to Kathy today, I think we’ve only had like seven or eight days total of bad weather or kind of rough weather out of 37 days so far,” said Mommsen, 63, a semi-retired graphic artist and web designer. “Roadways have been great, and the waterways, too, have been good, so it’s been a good trip.”

The south shore of massive Lake of the Woods loomed large on the next day’s agenda, and Kathy, 66, a ceramic artist, was on an errand to find a better map of the big lake. They planned to paddle from Warroad to Rocky Point on Thursday, Sept. 9, and perhaps finish the trek along the south shore to the mouth of the Rainy River the next day.

If the wind is too strong, Mommsen said, they’ll strap the canoe onto the trailer behind his bike, and they’ll pedal their way east up and along the Rainy River to Rainy Lake instead. They’ll continue their trip next spring or summer on a route that will take them across Voyageurs National Park into the Boundary Waters Canoe Area Wilderness and down the North Shore through Duluth and eventually back to the Twin Cities.

The logistics for next year’s leg of the trip are a work in progress, he said.

The inspiration for the trip came from a podcast he’d listened to about a bicyclist who had pedaled around the perimeter of Texas, Mommsen said.

That got the wheels turning, so to speak.

“We had never pulled a canoe behind a bike but we would walk around with a canoe on a trailer, and I’ve seen people pull a kayak behind a bike so I thought it was doable,” Mommsen said, adding he purchased a hitch made specifically for towing with a bicycle from a company in Guelph, Ont. “And then when I looked at a map, I realized that, except for the Rainy River, all of the rivers go clockwise around the state so you could do it all downstream.”

With his canoe in tow, Tony Mommsen pedals a trail in Fargo-Moorhead earlier this month. (Contributed/ Tony Mommsen)

The number of places they’d never been added to the appeal, Mommsen says.

“There were a lot of things that would have been new to both of us,” he said. “And Kathy and I have done a lot of bike camping and canoe camping and it just really seemed to fit.”

From St. Croix Falls, they paddled into the Mississippi River at Prescott, Wis., and downstream to La Crescent, Minn.. From there, they biked to Houston, Minn., where they picked up the Root River Trail, a 40-mile rail-to-trail route.

“We thought it was just a great chance for us to get warmed up with the trailer and all of our gear and stuff,” Mommsen said. “We had 40 miles of flat, easy practice.”

Their bicycle route across southern Minnesota included such communities as Preston, Austin, Blue Earth, Fairmont, Pipestone, Hendricks, Marietta and Ortonville. After two days paddling Big Stone Lake, they bicycled past the Bois de Sioux River, which was dry, Mommsen says, and resumed paddling at the mouth of the Red River in Wahpeton, N.D. Their trip north along the Red River included three days of pedaling and six days of paddling. They spent two days at the Red River State Recreation Area in East Grand Forks before biking and canoeing north to the Highway 175 crossing west of Hallock, Minn.

With their two bicycles onboard, Tony and Kathy Mommsen of Minneapolis paddle the Red River near Abercrombie, N.D., earlier this month on their paddling and pedaling trek around the perimeter of Minnesota. (Contributed/ Tony Mommsen)

This past week’s travels included overnight stays in Lake Bronson, Badger and Warroad. They’ve tried to stop and enjoy the sites along the way as much as possible, Mommsen says. No doubt, their modes of transportation get people’s attention.

“Half the time, you run into somebody and they have a story to tell,” Mommsen said. “We enjoy that. It’s been great – a lot of cute towns, a lot of nice places.

“We both really liked Grand Forks; we’d never been there.”

Despite the load, their equipment has held up well, Mommsen says, although canoeing in rough water can be dicey with full-size bicycles onboard.

“It feels just like a regular trip,” he said. “It doesn’t feel like it’s crazy. It has a certain fluidity that I like. You don’t have to deal with shuttling – you just paddle this much of this river and then you get out and bike for a few miles.

“I don’t know if I’ll do another trip exactly like it again, but it’s been really fun.”