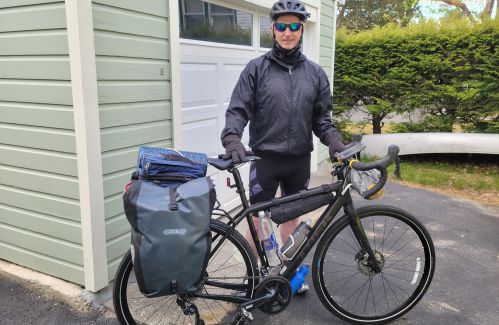 When I pedaled my bike out of my driveway in Easthampton on a chilly morning last May 1, my sights set on Long Beach, California, I had no idea what I was in for.

I headed south on the Manhan Rail Trail with adventure on my mind, not much else. After more than a year working from home, restricted from interacting with people beyond my small circle, deprived of cultural fulfillment and wondering with everyone else what the near and far futures held, I sought escape, freedom and a change of perspective.

I got that and more, not always in the ways I would have expected.

Riding across this vast country on a bicycle is a sizable undertaking, akin, some might agree, to thru-hiking the Appalachian Trail or scaling a Himalayan mountain. Such a ride will take you far from home, through unfamiliar and often hostile territory. It’ll challenge you physically, mentally and emotionally, and threaten to hasten your failure — even your death — in any number of ways.

Day 63, July 2, was the most intense and dangerous day of my ride. After more than 3,200 miles of dodging traffic, climbing hills, fighting wind, and strategizing to remain hydrated and fueled, I finally faced the gauntlet of crossing the Mojave Desert.

Between my cheap hotel in Parker, Arizona (the hottest city I’ve ever been in) and the next refuge of civilization, Twentynine Palms, California, lied 111 miles of lowland desert. Nothing existed there but rock and rubble. I checked and rechecked. No gas station/convenience stores, no buildings, no charming desert oases. No shade. Forecasts projected 107 degrees Fahrenheit.

Despite friends and family warnings against biking across the Mojave in July, I felt I had no choice. My southern route provided no viable alternatives. I left Parker at 3 a.m. to avoid the worst heat, carrying 11 liters of water. It was 90 degrees.

Ten hours later, I emerged in Twentynine Palms a different person. I survived but I had to draw from deep inside to push through the hostility, heat and utter, mocking emptiness that is the Mojave. Of course, the desert is a beautiful place, but I had little capacity to appreciate its beauty among my mantras of keep hydrating, keep fueling, keep moving.

Two days later I celebrated my 59th birthday in Beaumont, California, getting the celebrity treatment and free beers at the charming Craft Lounge as fireworks burst overhead to the DJ’s “The Star-Spangled Banner.”

I’m not an experienced cyclist, and that may have been in my favor. Rather, I call myself an adventurist. (Check my blog, agingadventurist.com, for a more detailed account of this bike trip.)

A more seasoned cyclist probably wouldn’t have opted to ride a southern route in the summer (hint: the desert is hot in July). Most cross-country cyclists decide on a tried and true route, like those mapped out by Adventure Cyclists, along which people are accustomed to inviting bikers for a meal or a place to crash for the night. These routes are also more northern, and therefore cooler on the whole.

For some reason that I haven’t bothered to analyze, I rarely crave to do things the way others do them, and so I self-navigated a sweeping route that took me through the cities to Washington, D.C., then southwest through Virginia. From there, due west across Tennessee, Arkansas, Oklahoma, Texas, New Mexico, Arizona and California. I suppose I opted for heat over climbing the high points of the Rockies.

On day one, May 1, full of adrenaline, I took an icy plunge into the Atlantic Ocean at Long Island Sound in West Haven, Connecticut, to commence my journey. I finished on Day 68, July 7, two days ahead of schedule, with a bookend dive into the Pacific at Long Beach and a lifetime worth of memories.

In retrospect, the challenges of this trip came in categorized blocks. There was the immediate challenge of getting used to the weight — 40 extra pounds of camping gear, clothing, a computer (I continued working on the road) and food and water strapped to every available space. The weight, mostly packed in rear panniers, became both a noticeable drag on hills and a burdensome sail catching head and crosswinds.

The first eight days were among the most treacherous as I dodged heavy, speed limit-ignoring traffic on roads and in cities along the Interstate 95 corridor. Some cities, including Philadelphia, Washington, D.C., and even New York, are set up well with bike lanes, trails and culture. In others (I’m looking at you, Baltimore and Newark), you’re taking your life in your tight-knuckled hands grasping the handlebars as if they will protect you from the bicycle-unfriendly drivers.

Virginia and Tennessee provided a welcome release from city traffic in exchange for steep, unending hills. After two weeks of slow climbs interspersed with a few brief coasts downhill, I wasn’t sure which was worse — the constant hills or the army of cars along the Northeast coast. That is, until I met the unrelenting headwinds of Arkansas and Oklahoma. West Texas, with its unfathomably vast, flat plains, tested patience. New Mexico roads climbed to nearly 8,000 feet at the Continental Divide, requiring twice as much breath for half the achievement.

Then the biggest challenge of all: the Mojave Desert crossing. On Day 68, I rolled into Long Beach with a mixed sense of accomplishment, elation and sadness.

Like my Mojave crossing, the entire experience was a roller-coaster of emotion, physical challenge and mental focus.

Every day included swings from ecstasy and indescribable beauty (usually in the morning) to misery and pain (by late afternoon). Not much in between. To the many queries as to why I did this, or why I was doing it, my best answer is: to feel the full brunt of life, to live the highs and lows, to experience the 2’s and 3’s but also the 8’s and 9’s. In front of my desk at home, it’s mostly 4’s, 5’s and 6’s, if that makes sense.

But really, if people had to ask why I endeavored to take such an adventure, it usually meant they would never get it. Riding a bike five to 10 hours every day for 68 days is in turns painful, exhilarating, dangerous, liberating, exhausting and empowering. It was never once boring.

Freedom and triumph often come packaged in drudgery. That’s partly what makes them so valuable. Sometimes, amid the most excruciating parts of this journey, when I wasn’t sure I had strength to go on any longer, I would ask myself: Would I rather be at home sitting at my desk?

Not once did I answer in the affirmative.

Would I do it again? Would I take another cross-country bike trip? Sign me up. But give me a cooler, northern route, and travel west to east with the prevailing winds next time.

What I learned from my cross-country bike trip could fill volumes, and I’m considering a book about being a regular (i.e., non-cyclist) guy riding across America. But much of what I take away is internal and difficult to express in words. I enjoyed who I was on the adventure road. I’m convinced we all could use more of this in our lives. Mostly, I’m determined to keep the adventure spirit alive while at home, and pursue more quixotic adventures in the near future.