Woken up to flee from fire 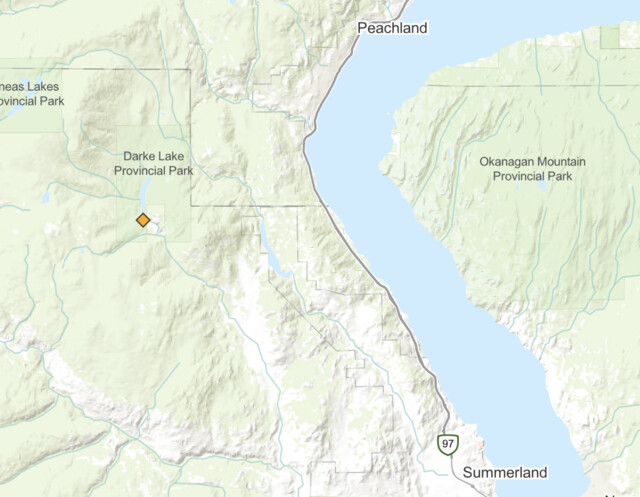 A man was out camping on Wednesday night in the Darke Lake Provincial Park when he woken up by first responder from the local area letting him know a wildfire had started.

Paul Cross was told there was a fire on the entry road and he had to pack his gear and head out.

“They woke us up around midnight, we went to bed fairly early, around 9 p.m. Very few people we saw come in and go out,” he shared over messenger.

Cross snapped a photo of the wildfire near the road when driving out late that night.

BC Wildfire Service currently has the new fire listed on their map at .63 hectares in size.

The BC Service Wildfire map is showing a new wildfire that has been reported at the south end of Darke Lake Provincial Park, sitting between Summerland and Peachland slightly to the west.

The wildfire was discovered on Wednesday and is currently estimated at 0.63 hectares in size. The cause of the fire is unknown at this time.

There are 210 active wildfires currently burning in BC.