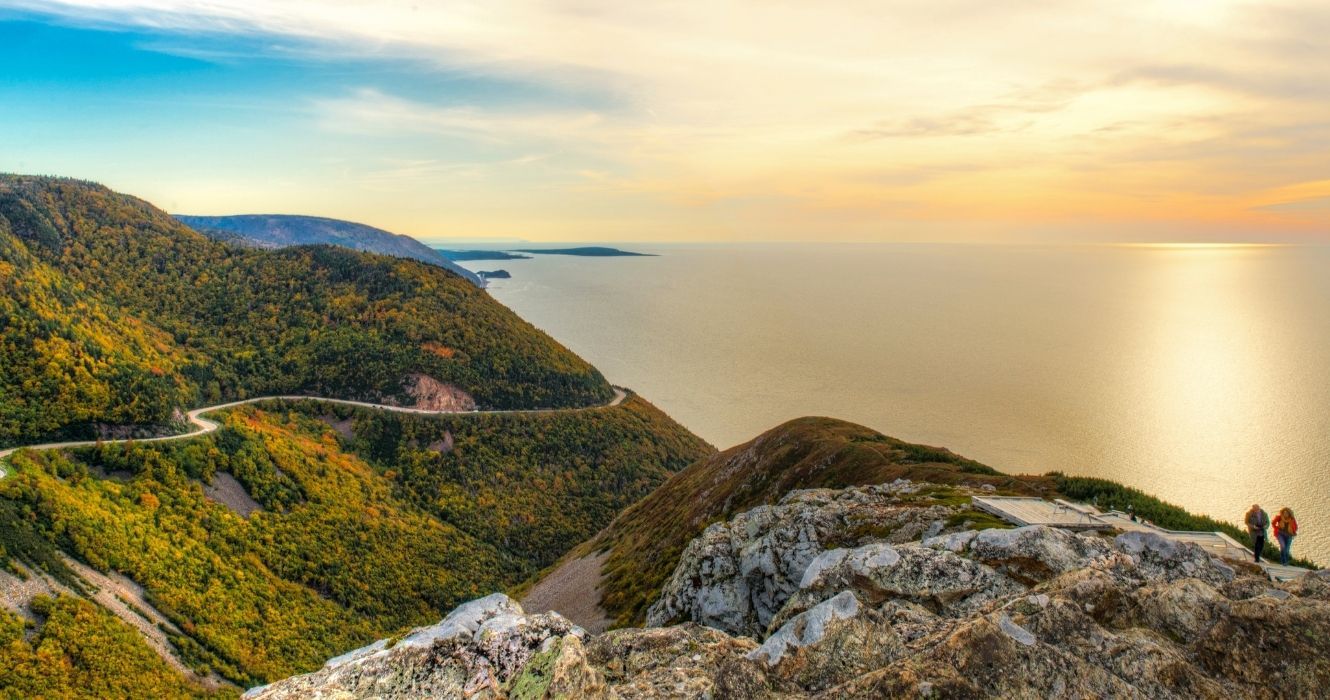 The Cabot Trail is one of the world’s most scenic drives, here’s what you can do, and where to stay, if you’re planning a weekend there or more.

The Cabot Trail is located on the island of Cape Breton in stunning Nova Scotia. This winding road spans roughly 186 miles and encompasses the entire northern half of the island. Visitors to Cape Breton can explore the trail in a number of ways, with the two most popular options being by car and by foot (hiking). While it might seem like a lot to hike, there are plenty of ways to break up the journey, including multi-day tours and guided hikes.

Alternatively, driving allows visitors to explore the island of their own volition, making any stops they want along the way. There are pros and cons to both, and neither is the best way to explore the trail – just another option to see an absolutely stunning island route! Here are some helpful tips for those considering one or the other, or maybe even both.

Echoing the oceanside coastline comparable to that of Maine, Breton Island offers seaside views with dramatic cliffsides that one could only dream of. The island itself is home to more things than could fit in a single week, so for those looking to get the most out of their island activities, driving is definitely the way to go. The trail itself can be driven in one day but the question remains – why would anyone want to do it in a day? There’s so much to see and do that most suggest reserving at least five days, preferably seven, in order to see all that it has to offer. If nothing else, the trail should be driven in no less than three days, which could make it a perfect weekend trip, as well.

There are literally hundreds of things to do on Breton Island at any one time, but here are some to consider factoring into a road trip.

Where To Stay Along The Way

Since the Cabot Trail snakes its way around a majority of the island, it’s easy enough to find good accommodations depending on a variety of budgets. Those who choose to visit Highlands National Park can also opt to spend the night at a campsite there, making the visit very affordable.

Rates are in CAN and may differ when converted to USD.

Where To Stay In Cheticamp

The following include flush toilets, shower, oTENTiks – so minimal camping gear is needed. The average rate is $33/night with an $11 reservation fee, plus a $16 daily admission fee for two adults.

Where To Stay In Pleasant Bay

Where To Stay In Meat Cove

Where To Stay In Ingonish

Where To Stay In Baddeck

Baddeck is often where travelers will begin or end a trip around the Cabot Trail, so this is a good place to book a starting location or a place to book a final overnight stay.

Next: This Nova Scotia Island Is Free To Explore, But Not For The Faint-Hearted

North Dakota: Why Theodore Roosevelt National Park, Bison, And Badlands Are Worth It

Originally from New York, Katie is used to a fast-paced lifestyle. She got her personal start with writing in the second grade, and carried that passion with her until she won a spot in her high school’s published poetry book – but not before becoming the News Editor and columnist for the high school newspaper.

In college, she majored in English Literature with an emphasis in Political Science, soaking up most creativity and method from one of the last professors to study under famed beat poet Allen Ginsberg. The more she wrote, the more she learned about the world and, more importantly, herself.

She has been writing professionally and has been published since the age of 19, and for nearly a decade has covered topics in entertainment, lifestyle, music news, video game reviews, food culture, and now has the privilege of writing and editing for TheTravel.

Katie has a firm belief that every word penned is a journey into yourself and your own thoughts, and through understanding this, people can begin to understand each other. Through her voice, she brings personality, research, and a bit of friendly sarcasm to every piece she writes and edits.