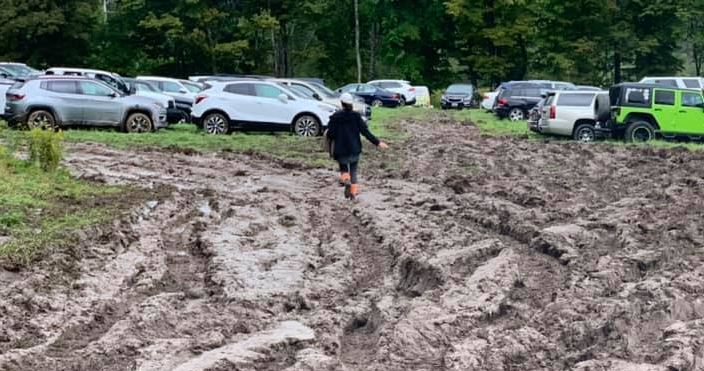 After waiting in line for three hours to park her vehicle at the Elements Music and Arts Festival in Lakewood, Pennsylvania, on Friday, September 3, attendee Blair Hemlepp encountered something odd when she finally got to the front of the line — a parking attendant told her to “manifest” an available spot.

Unsurprisingly, it didn’t work. There was no spot.

Instead, Hemlepp had to park diagonally down a walking trail. She and her group of friends then trekked half a mile to where shuttles were supposed to drive them to the festival grounds, but instead, another worker greeted the group and informed them that the shuttle spot had moved another half mile or so down the mountain. Hemlepp and thousands of her fellow festivalgoers headed down the muddy hill, lugging their camping gear, until they reached a giant grassy lot. They weren’t given much instruction there, either.

“There was some guy with a megaphone screaming profanities about, like, his penis or something, but he wasn’t actually telling anybody what to do,” Hemlepp says.

So she and her group sat in a line of sorts for eight hours, before learning there were no more shuttles coming. She lugged her gear back up the mountain, got in her car, and headed to a hotel about an hour away. She never made it to the three-day festival.

Hemlepp is just one of possibly thousands who had an awful experience at the music, arts, and camping festival, which took place Friday through Monday over Labor Day weekend, with a lineup of EDM artists including Diplo, CloZee, Griz, and Chris Lake. The event, held on 150 acres of private land about three hours outside of New York City, began as a one-day event in 2013 and upgraded to a three-day event by 2017. This year, about 7,000 fans attended. Elements’ social-media pages are now flooded with those same people demanding a refund. “There are zero staff helping and the few volunteers have no clue what’s going on,” “(We) were so dehydrated because the free water was out or we had to pay 4$ for a small bottle of water,” and “This festival was an unmitigated disaster,” were just some of the comments left on Instagram throughout the weekend. Many compared the situation to the Fyre Festival fiasco.

Elements Festival — I stepped away for a few days after the insanity of last week, but coming back to some absolute horror stories this weekend including 16 hour waits to access camping that was full, cars completely stuck in mud from Ida’s rains + much more.

Between tickets, parking passes, and a hotel stay, Hemlepp says she spent about $1,500 on the festival. She emailed the festival asking for a refund but hasn’t heard back.

A representative from Elements told Vulture on Wednesday that because of Hurricane Ida, which hit the area earlier in the week, the festival was unable to use two-thirds of its parking area and had to relocate its primary lots on Friday. “No one from our team was instructed to tell anyone to sleep in their cars,” a rep told Vulture. The festival disputes all other claims of negligence and mismanagement.

Two other attendees, Saliana Rosenfield and Landis Hennessy, did make it inside the festival, but said that by Saturday morning the festival had run out of filtered water to drink and the Porta Potties were full, leaving people to go to the bathroom outside. Space was limited, so some attendees set up their campsites near the overfilled Porta Potties. Defeated by the bad experience, Rosenfield and Hennessy left at 8 p.m. Sunday. On their way out, their car got stuck in the mud; they had to pay a local $80 to tow it out. Three hours later, they were free.

An Elements rep told Vulture that some areas of the parking were saturated from the rain and they had a team of towing vehicles prepared to assist with any car that was stuck. “Every vehicle was able to leave by the end of the festival,” the rep said, and added that “though certain restroom areas were not serviced as frequently as they could have been by our vendor, there were multiple restroom banks available at all times.”

The line that we waited in for 6+ hours, causing us to miss all of Friday’s lineup pic.twitter.com/YU24u3LC9j

My car getting towed (with construction equipment) through the mud that they charged us $110 to park in… pic.twitter.com/WWlVcYLfNo

Hi everyone 💖 we would like to take a moment to sincerely apologize for how difficult it was to get into the festival yesterday for some of our community. pic.twitter.com/IAOoqUUOrU

Kolby, an attendee who declined to give his last name for professional reasons, says he wants a refund because the festival didn’t offer the activities it promised. The site had a lake, which the festival advertised as a place to swim while listening to music played on the nearby Water Stage. But at some point Saturday, Kolby says two EMTs showed up and began instructing everyone to get out of the water, because all water-related activities were canceled.

Kolby heard rumors about why they had to evacuate the lake — because of insufficient staffing, or a dangerous algae bloom, or that one of the septic tanks had burst and drained into the lake — but nothing was confirmed. The Northern Wayne Fire Company did not return our request for more information, and the Pennsylvania State Police say they did not receive any calls from the festival.

“All advertised activities were allowed during the weekend,” an Elements rep told Vulture. “People were allowed in the lake within the safest area bordered by the dock.”

In 2020, Forbes interviewed Elements Festival co-founders Timothy Monkiewicz and Brett Herman about how they planned to host a safe festival in the middle of a pandemic. The two told Forbes they created a consulting service company, called Tested Contained Retreats, to ensure attendees were COVID-19-free. For this year’s festival, Elements attendees had to prove they had a negative COVID-19 test or were vaccinated, according to its website, but when it came time to present the proof, Kolby says the festival workers didn’t even scan the QR code, leaving him nervous about being in such a large crowd. On top of that, there were no sanitation stations anywhere, he says. One attendee posted on Facebook that since returning from Elements, they had tested positive for COVID-19.

“We used CrowdPass to verify attendees during the changeover, and performed offline checks when there were issues with internet availability,” an Elements rep told Vulture.

Another attendee, Emily L., who declined to give her last name for professional reasons, is vegetarian and said the festival ran out of food options for her, so she ended up eating just the bananas and Nutella she brought. According to the festival’s website, attendees were allowed to bring one factory-sealed water bottle, no larger than one liter, because refill stations would be available (according to Emily, there were only three), but when the festival ran out of water, Emily says she found some water bottles near a stage and passed them out to attendees.

“Although wait times were longer than we had expected, food and water were available throughout the event,” an Elements rep told Vulture.

absolute shit show we waited over 10 hours and never got in pic.twitter.com/Vtvxwg5k6L

Emily is a regular of festivals; she’s been to about 15 total and she likes to rate them based on logistics and safety, music production, and overall vibes. She didn’t rate Elements particularly well.

“Based on my time with my friends and the social aspect, I would give it a seven [out of ten]. In terms of music and art, that was also a seven. Amazing. Logistics? Zero,” she says.

Frank Prochilo, a civil litigation attorney in New York, is gathering information from Elements attendees to look into the possibility of filing a lawsuit. He says that because the festival didn’t live up to its promises, like having water and food, attendees deserve compensation and a full refund.

“With this festival, I’ve never seen anything like this before,” Prochilo says.

(That might not be entirely true, of course, if you remember 2017’s Fyre Festival, a music festival executed so poorly that the founder, Billy McFarland, pleaded guilty to one count of committing wire fraud to defraud investors and attendees. While attendees were promised luxury villas and nice meals, they received FEMA tents and cheese sandwiches. The disaster produced two documentaries.)

The Elements team released a statement apologizing for any disappointments or logistical issues. “We have set up a dedicated email address at elements2021@elementsfest.us, where we welcome your comments and will respond to every email we receive,” part of the statement reads.

A statement from our team. pic.twitter.com/cBpuAQs88F

This is a developing story and will be updated accordingly.