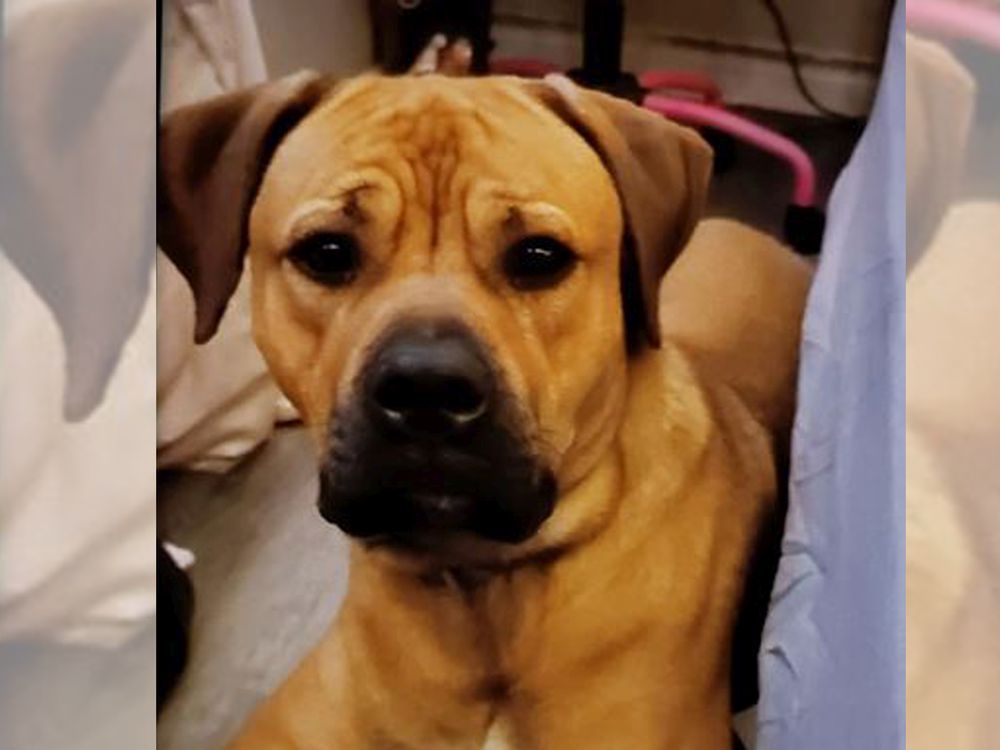 A dog and truck stolen from a Windsor parking lot Thursday night were reunited with their owner over the weekend after being located more than 500 kilometres away.

Serena Bellemore, 24, received a call from police at 2 a.m. on Saturday saying they’d pulled over her truck in Trenton, ON., and her dog, Buster, was still inside. The driver was arrested.

Buster was taken to a humane society in Belleville, where he was reunited with Bellemore later that day.

“He was very tired at first — he slept the whole way back home and the whole day after,” Bellemore told the Star. “Now he will not leave my side. He’s very happy to be home.”

Buster, a one-year-old bullmastiff, was inside Bellemore’s black pickup outside a Shoppers Drug Mart in Pillette Village shortly after 9 p.m. Thursday. The vehicle was locked but running with the air conditioning on, keeping Buster cool during Bellemore’s quick trip to the shop.

When she exited the store after minutes inside and couldn’t find her truck, she said she thought someone was playing a joke on her.

“All of a sudden, it just hit me and I couldn’t breathe. I wasn’t even worried about the truck, just my dog.”

Bellemore reported her truck and dog stolen to Windsor police, who put out an all-points bulletin to other law enforcement agencies, and released a photo of Buster on social media as well as a description of the truck, which has multiple identifiable decals on its back window.

She received the call from Quinte West OPP in Trenton on Saturday, her 24th birthday. A few hours later Bellemore’s grandparents drove her to Belleville in their vehicle to retrieve Buster and her truck.

An emotional video of the reunion in Belleville posted to Facebook shows Buster wagging his tail and climbing into Bellemore’s lap, licking her face repeatedly.

The suspect had loaded up the truck bed with camping gear and was going camping, Bellemore said. Garbage was strewn about inside the cab of the truck, and there are scratch marks on the dashboard and door panel from Buster’s claws.

“I think he got left in there. I don’t think (they) fed my dog either,” she said.

While Buster was missing, Bellemore received an outpouring of support from strangers on social media. Her post to Facebook about the theft was shared more than 2,500 times, and individuals she’d never met had raised more than $1,000 to use as a reward for Buster’s safe return.

“There was such an enormous support,” she said. “It was crazy how much of a response I got.”

In a news release on Tuesday, Quinte West OPP said police were called to an address on Stacey Road in Quinte West after someone phoned to reported a person in possession of a stolen vehicle.

Officers responded and confirmed the vehicle was reported stolen out of Windsor. One person was arrested, and a prohibited knife was located in the accused person’s possession.

Breanna Pomeroy, 26, of Windsor, is charged with possession of property obtained by crime valued at over $5,000, unauthorized possession of a weapon and failure to comply with a release order.

Sign up to receive daily headline news from the Windsor Star, a division of Postmedia Network Inc.

Thanks for signing up!

A welcome email is on its way. If you don’t see it, please check your junk folder.

The next issue of Windsor Star Headline News will soon be in your inbox.

We encountered an issue signing you up. Please try again