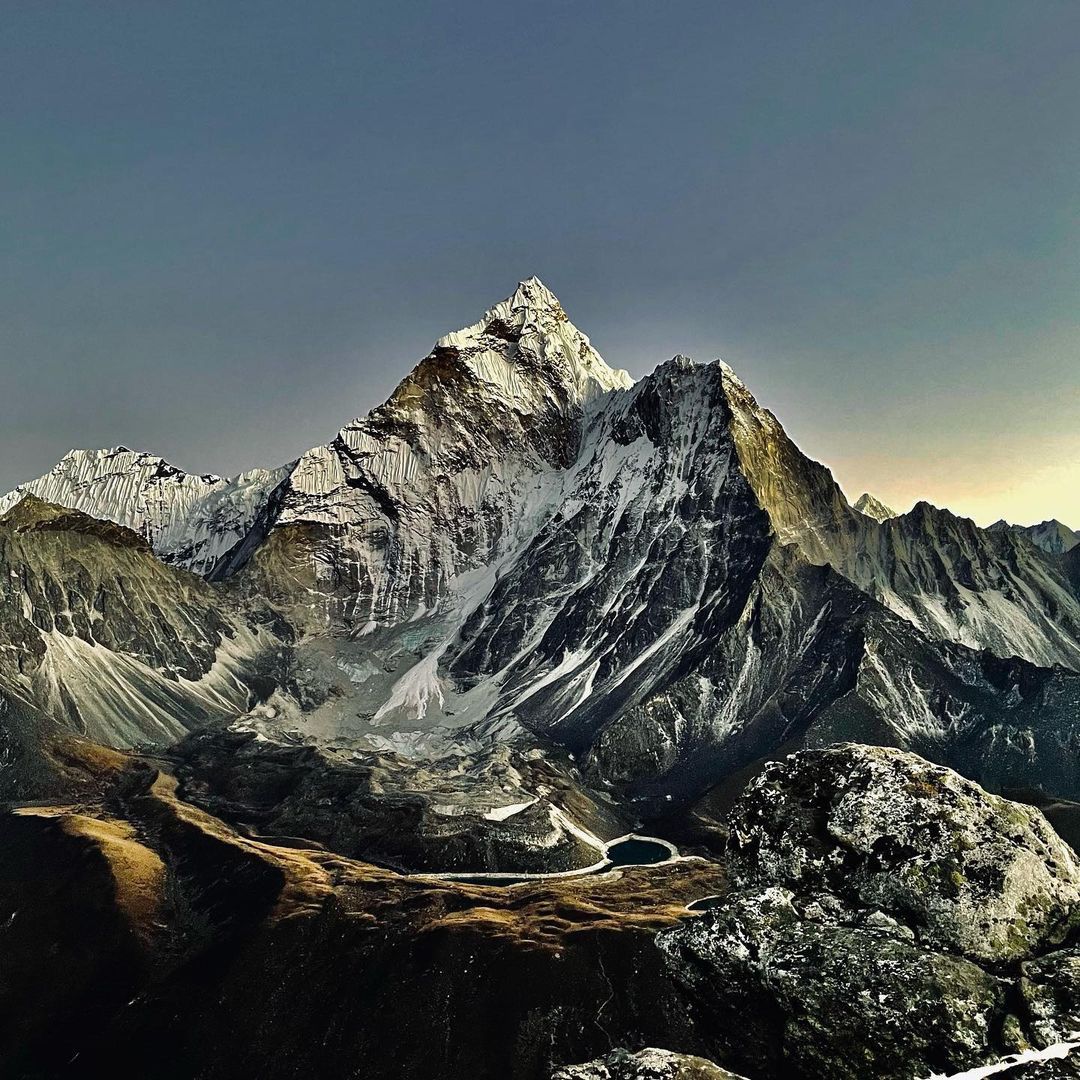 British mountaineer Kenton Cool’s resumé is bursting at the seams. His 15 Everest summits tend to catch the eye, but it is on Ama Dablam that Cool kick-started his career.

“I remember standing on the summit, thinking that this was my entry to big mountain climbing, that this is it,” Cool says of his first expedition in 2000.

Cool has returned to Ama Dablam many times since, most recently in 2020. 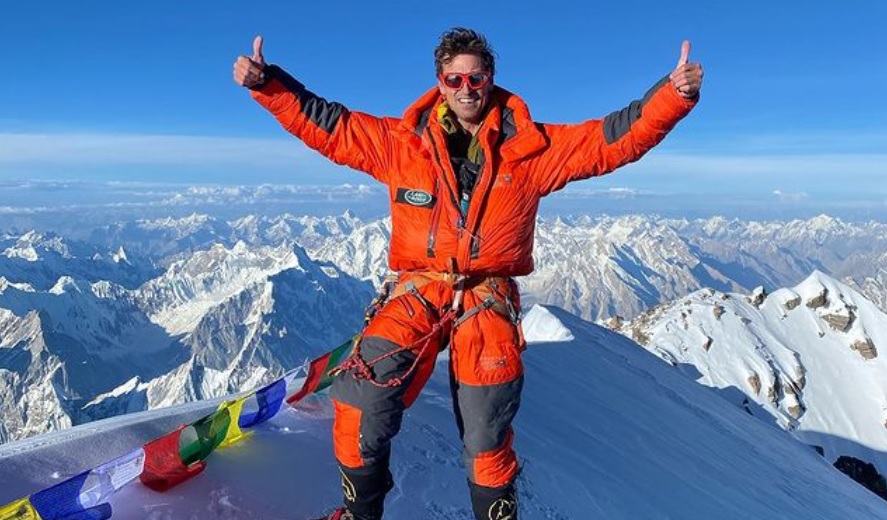 Kenton Cool on the summit of K2 for the third time, earlier this summer. Photo: Kenton Cool

Deemed “beautiful but unclimbable” by Sir Edmund Hillary, Ama Dablam is a picture-perfect mountain. Ama Dablam means Mother’s Necklace. The ridges are said to resemble a mother’s arms. The hanging glacier is the Dablam, a traditional double-pendant worn by Sherpa women that contains pictures of the gods.

Hillary’s assertion was soon proven wrong. Mike Gill, Mike Ward, Barry Bishop, and Wally Romanes first climbed Ama Dablam in 1961 via the southwest ridge. Other notable ascents include Jeff Lowe’s 1979 solo climb of the south face, and the 1996 alpine-style ascent of the north ridge by Friedl Huber, Max Berger, Alois Badegruber, and Roman Dirnböck. However, the southwest ridge remains by far the most popular route to the 6,812m summit.

Trek to Base Camp

Though there is an old airstrip, most climbers hike to Base Camp. The altitude makes flying in a little risky without acclimatization.

After a short flight from Kathmandu, the trek begins from Lukla. The first few days mirror the trek to Everest Base Camp, eventually separating at the village of Pangboche. Here, you take a hard right and gain altitude toward “one of the most beautiful base camps anywhere.” 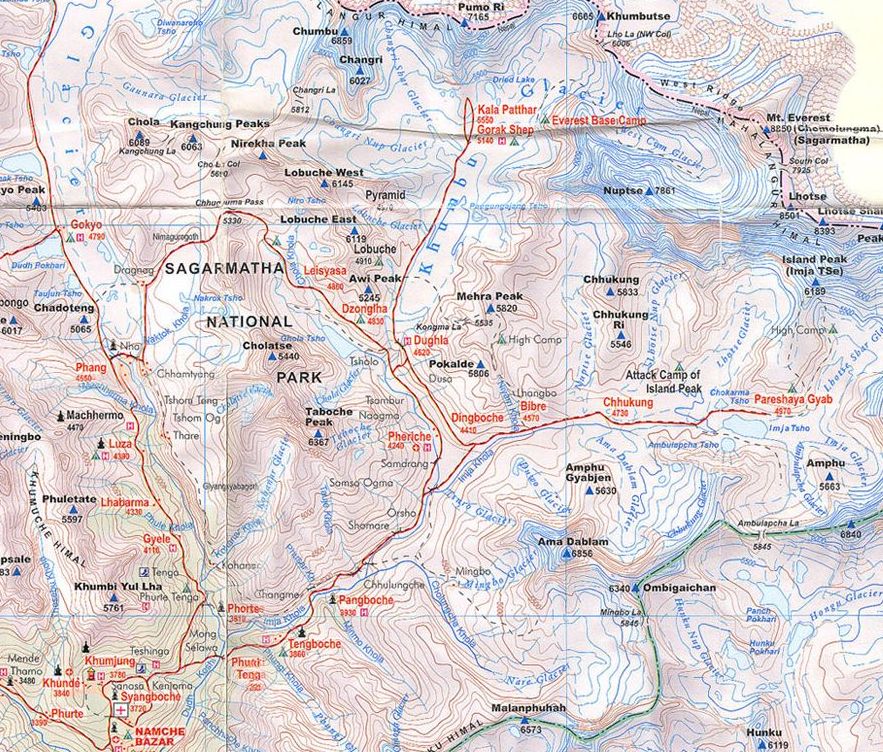 Situated in a grassy alpine meadow, Base Camp reminds Cool of the Alps. The seasonal camp is set up during the autumn and spring climbing seasons. Autumn is much busier because Everest’s popularity takes Sherpas and outfitters away during the spring. Teams begin to arrive in September, and some groups now remain as late as February.

A teahouse has sprung up just a short walk from Base Camp, among the remains of some old yak huts. Teams can store gear here, and it sometimes serves independent climbers as a permanent base camp. 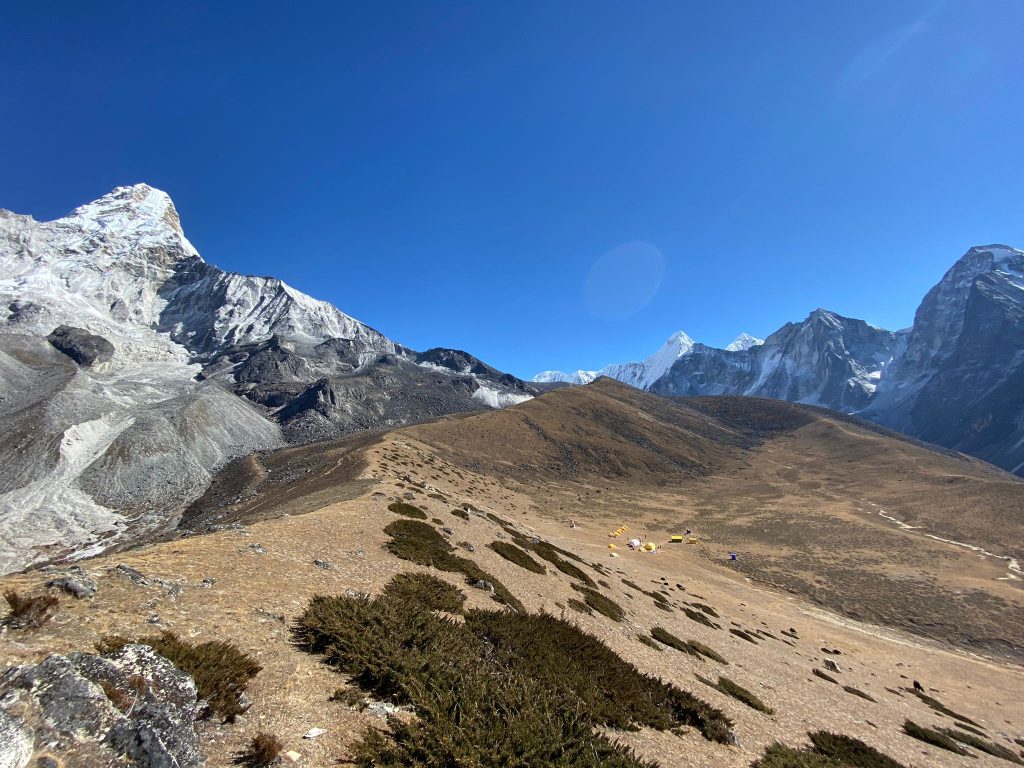 The path from Base Camp to Yak Camp is a “beautiful, mellow climb if you’re well acclimatized,” Cool explains. You make your way up grassy trails through high yak pastures to a fairly exposed ridgeline, gaining altitude all the way. Once you’ve popped up onto the shoulder at the top of the ridge, you hang a left onto a less well-defined path. Here, it can be easy to lose your way among rocks and big slabs of granite. Yak Camp is roughly 150 vertical metres above the saddle.

Climbers usually use Yak Camp just once during an expedition. It’s almost a perfect camping spot, “flat with divine views.” But water has become a major problem. You need to hump water up from Base Camp, as there is no snow or ice to melt.

Cool likes to use Yak Camp to acclimatize, but many skip Yak Camp entirely and head straight to Camp 1.

“It’s quite a hoof across a notorious boulder field,” Cool says. Half an hour out of Yak Camp you hit this boulder field, which takes an hour or more to cross. You have to hop between unstable boulders with all your gear. Cool recounts a fellow guide describing how he never feels that he has chosen the easiest route across that obstacle course.

After the boulder field, it’s another 20 minutes to the start of the fixed lines. Most people clip in to scramble up the granite slabs. After a couple of hundred metres, you pop over the top to arrive at Camp 1. 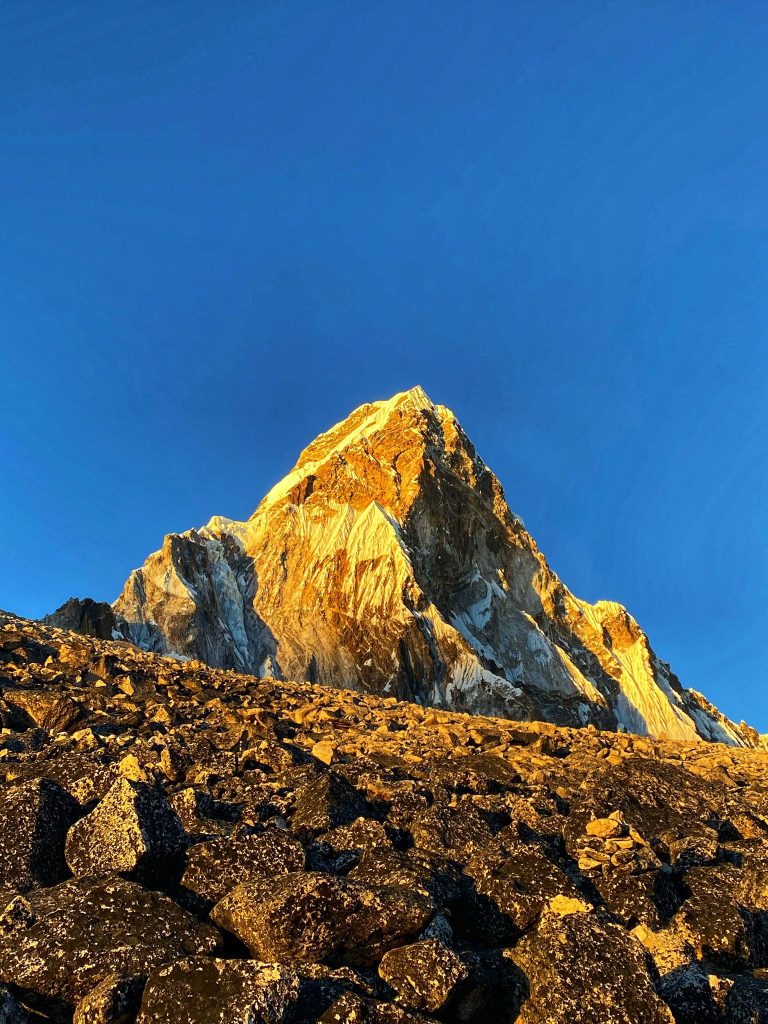 It takes between five and six hours from Base Camp to Camp 1.

Camp 1 can “fit about 10 tents”, so overcrowding can be an issue, especially if weather windows are few and brief. As with Yak Camp, water is a problem. So too is waste. “Unfortunately, not everyone takes their waste with them,” says Cool. “I’ve seen some interesting tactics, including people shitting on suitable rocks and then hoying them off the steep side of the mountain. But now they are even running out of suitable rocks!”

Most teams spend two nights at Camp 1 and will do an acclimatization climb almost as far as Camp 2.

Almost immediately out of Camp 1, you clip into fixed lines. There are more fabulous views as you traverse some snowy ledges before you reach good-quality granite. There’s not much loose rock, and the climb is “engaging enough to be interesting, without being dangerous.”

As you climb onto the north side of the ridge, it can start to feel very chilly out of the sun.

Eventually, you arrive at the daunting-sounding Yellow Tower, the crux of the entire route. It’s a steep, uncompromising tower of granite that is heavy in feldspars, a mineral that gives the rock a yellowish hue. Some struggle here. There is a tricky traverse, and “with a rucksack, it’s a huff and puff,” says Cool, “It might be 6a if you free climbed it.” 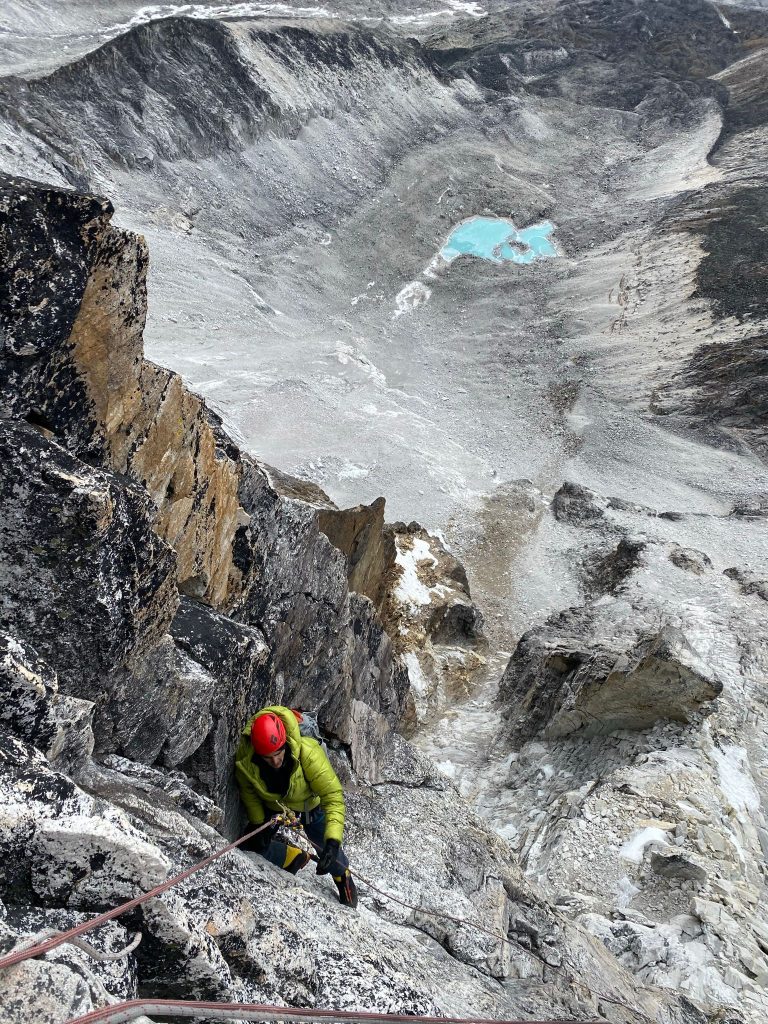 Near the top of the Yellow Tower. Photo: Kenton Cool

You emerge at Camp 2, perched on top of the tower. “It’s magnificent, one of the most out-there camps,” Cool says. The small camping area has space for no more than seven or eight tents. When busy, tent corners might overhang the edges. It’s not for the faint of heart.

The climb from Camp 1 to Camp 2 takes around four hours.

Recently, climbers have launched their summit bids directly from Camp 2, skipping Camp 3 entirely. Either way, this is when the climb ramps up. 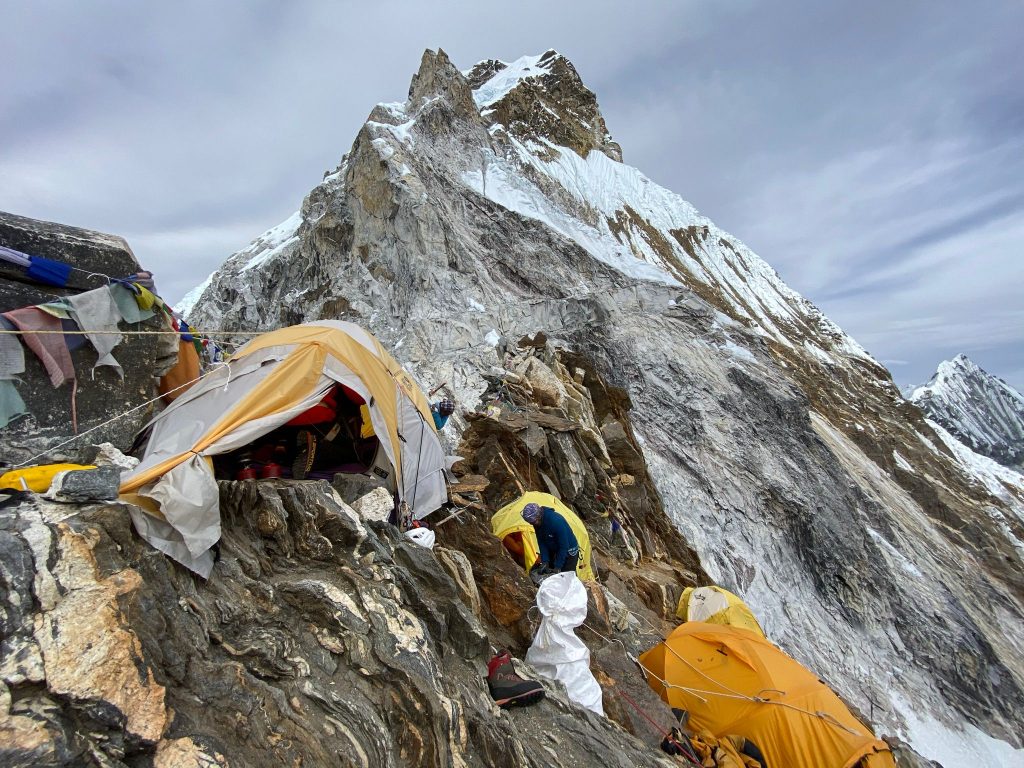 You depart around the back of the tower and cross what is sometimes a snowy couloir. These days, the area is often dry. Then you climb more big slabs of granite. There used to be an icy gully to get to the shoulder, but the whole section was granite last year. Though you are on fixed ropes, the route feels quite exposed. It’s all a bit awkward, with a slight rightward line.

If there are lots of climbers aiming for the same weather window, then there is a danger of rockfall. You will climb at 70 or 80 degrees, which feels vertical on the fixed lines. If you’re pushing from Camp 2 for the summit, you’ll have to tackle this in the dark.

After two hours, the angle starts to ease. At last, you reach snow. Next comes a “really awkward, unpleasant” traverse to get onto the mushroom ridge. There are lots of old fixed lines and ups and downs to negotiate. “People don’t talk about it much, but it can take 40 minutes and you’re still in the dark. It can unnerve people and might be the crux of summit day,” Cool explains.

After a short couloir, it’s up onto the ridge. This ridgeline is quite steep, and the ropes here were poorly fixed last year (though Cool notes that they are reset each season). While complex for more inexperienced climbers, the outrageous exposure is a joy for more seasoned mountaineers.

You will have been climbing for five hours or more by the time you hit a final steep snow slope to Camp 3.

From Camp 3, you head right, gaining height under the pyramid to a headwall access point above the Dablam. Then it is straight-up on a 55-degree slope that eases as you near the summit. It is “straightforward, but exposed and cold” because the sun doesn’t hit these upper slopes till late in the day. The headwall seems to go on forever, particularly if you have pushed from Camp 2, but eventually you reach the summit plateau.

“The summit plateau is like the back of a whale hump,” says Cool. The summit is fairly obvious but broad and wide. In good weather, you have great views out to Everest.

“But don’t be lulled into a false sense of security because Ama Dablam is below 7,000m and on fixed lines,” Cool warns. It is a long, cold summit day from Camp 2. 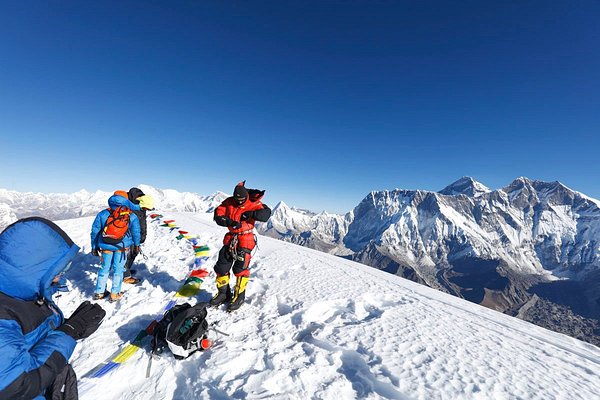 Thanks to all those fixed ropes, the descent can be pretty quick.

It is straightforward down to Camp 3. Most people hand wrap and don’t bother to rappel. But after Camp 3, the descent is much more time-consuming. From the mushroom ridge, you have to downclimb the gnarly traverse that is perhaps harder than on the way up.

After the traverse, you mostly rappel. It is too steep to hand wrap. Once at Camp 2, climbers hydrate and rest. Then almost every team tries to get down to at least Camp 1. There’s an easy rap down the Yellow Tower, then a slightly tricky traverse back onto the southwest ridge with some downclimbing: “You need to be on your game here.”

Most people collapse in Camp 1, but a few extremely fit climbers continue on to Base Camp. If you go all the way down, you arrive in the dark after a mammoth but rewarding summit day.

Martin Walsh is a freelance writer and wildlife photographer based in Da Lat, Vietnam.

A history graduate from the University of Nottingham, Martin’s career arc is something of a smörgåsbord. A largely unsuccessful basketball coach in Zimbabwe and the Indian Himalaya, a reluctant business lobbyist in London, and an interior design project manager in Saigon.

He has been fortunate enough to see some of the world. Highlights include tracking tigers on foot in Nepal, white-water rafting the Nile, bumbling his way from London to Istanbul on a bicycle, feeding wild hyenas with his face in Ethiopia, and accidentally interviewing Hezbollah in Lebanon.