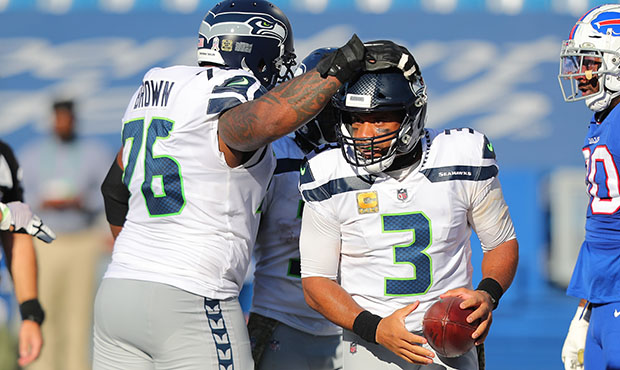 LT Duane Brown will be in Indianapolis to protect QB Russell Wilson on Sunday. (Getty)

And will K.J. Wright return to Seattle? (No.)

There are, of course, more questions that linger about the Seahawks’ 2021 squad, like “Can Shane Waldron’s offense can make the most of Russell Wilson?”, or “Can the cornerback group defy expectations?” While those are the ones that will make or break Seattle’s season, fans will have to wait much longer than this Sunday’s season opener in Indianapolis to get their answer.

The good news is that they won’t have to wait for a few injury updates and clarification on Brown’s status, thanks to a Monday afternoon press conference from Pete Carroll. Here’s the latest:

Duane Brown is back at practice and expected to play

Seattle’s Pro Bowl left tackle will suit up this weekend after a month-long “hold-in” left his status with the Seahawks in doubt. The 36-year-old Brown watched all of training camp before the standoff finally came to an end this week. Carroll was hesitant to offer any details about the team’s contract negotiations (or lack therof) with Brown but instead said he’s thrilled to see a healthy Brown return to practice.

“He’s really healthy right now,” Carroll said. “And I’m really thrilled about that for him. It was one of the things we realized about the process of it, that we would not wear him down at all during camp. So, he’s got fresh legs coming.”

I don’t think fans need to worry about Brown jumping into action this week after missing so much time. The 13-year vet has been a stalwart of the O-line, earning the highest grade of any other Seattle lineman since his arrival in 2017. He’s also been a consistent force despite nursing injuries during the regular season, a process that includes rest days during the week. The real concern lies with ensuring he can remain healthy over the course of the season. So far, that’s been achievable; he’s missed just four games during his Seahawks career.

Colby Parkison (foot) won’t make it this week – or next

Second-year tight end Colby Parkinson has resumed some running while he recovers from a broken bone in his foot, but he doesn’t appear close to a return.

“He’s on his way back,” Carroll said. “It’s a foot injury that you’ve just got to kind of work your way back at it and not overdo it and make sure we don’t mess it up along the way. And so we felt like if we don’t have him available here then we can have a couple weeks to get him ready. That’ll be really important so that when we get him back he’ll stay back.”

Parkinson suffered a broken foot last season and didn’t return to the field until early November. That he wasn’t in need of surgery this time speaks to a potential earlier return, though Carroll has remained non-committal about a timeline.

Parkinson was one of Seattle’s more promising pass catchers in the early part of camp. Despite coming off of a relatively quiet rookie season, the 6-foot-7 Parkinson was a routine target for Wilson, particularly in the red zone, and makes for an intriguing addition to the offense upon his return.

In the meantime, the Seahawks have promoted tight end Tyler Mabry to the active roster.

“He’s got a couple things we’re working on,” Carroll said, adding that Brown’s injury could take a couple weeks, “but none of them are debilitating.”

Last week, Carroll hinted that he was open to the idea of the fourth-round pick competing for starting reps. While that feels like an uphill battle for a rookie who has missed plenty of time in camp, the cornerback room remains the most competitive on the roster. Tre Flowers is the projected Week 1 starter on the right side and D.J. Reed is expected to be the starter on the left, but other names will be pushing for time. Among those is former Husky Sidney Jones, who can play on either side.