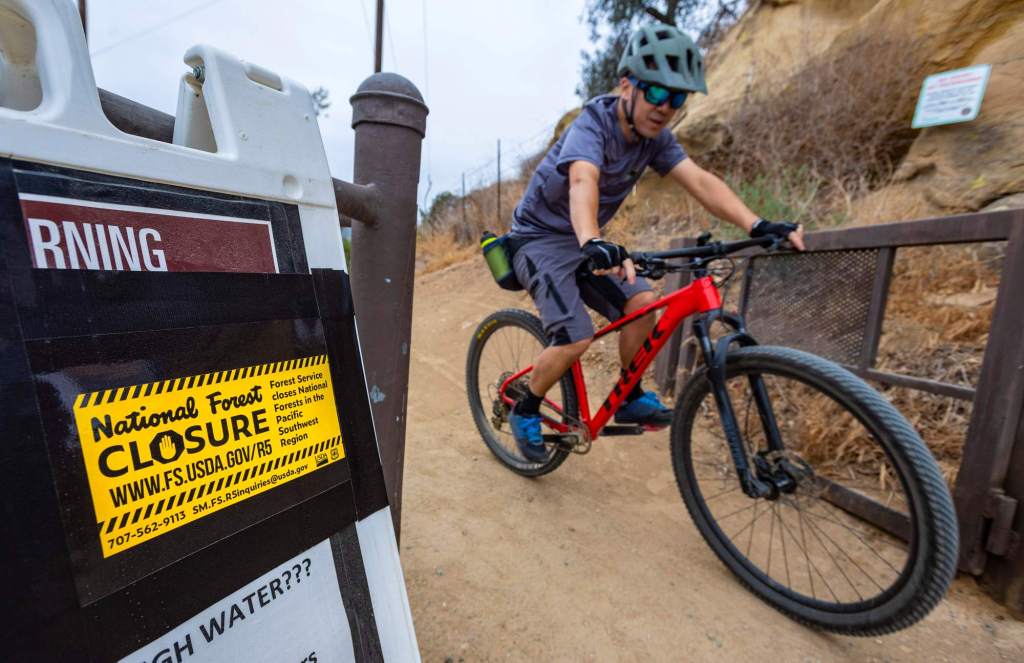 Labor Day weekend can be one of the most popular times for local mountain resort towns and campgrounds set in Southern California’s lush forests and remote regions.

But with fires raging to the north of the state, and resources being taken up fighting those fires, vacationers will have to make other plans for the holiday weekend.

The U.S. Forest Service announced this week that 17 of the region’s National Forest areas shut down for the holiday weekend as of Tuesday, Aug. 31, prompting closures at places such as the Snow Summit and Snow Valley resorts, popular hiking and mountain biking areas and Mountain High. Mammoth Mountain, another in-demand destination, also closed.

The closures, in place until at least Sept. 17, are due to the fires in Northern California putting a strain on resources, a decision made to “better provide public and firefighter safety due to the ongoing California wildfire crisis,” an announcement by USDA Forest Service Pacific Southwest Region said.

“We do not take this decision lightly, but this is the best choice for public safety,” Regional Forester Jennifer Eberlien said in the statement. “It is especially hard with the approaching Labor Day weekend, when so many people enjoy our national forests.”

Samantha Reho, spokeswoman for U.S. Forest Service, said it was only the second time in the Pacific Southwest region’s history that a full closure had been put in place. The last one was Sept. 9, 2020.

In addition to the 17 closed this week, El Dorado near the fire-threatened Tahoe area had already enacted a closure on Aug. 17, which will last through Sept. 30.

Brian Roe, of Bakersfield, was looking forward to the June Lake fishing and camping retreat he’s taken for nearly 25 years. An estimated 200 men from around the country gather, but had to cancel their plans for this time.

“I was really looking forward to a vacation,” said Roe, adding that the last year has been tough with the coronavirus restrictions.

He will leave his camping gear at home and instead opted for a motel in June Lake, not far from Mammoth Lakes, for a few days next week, hoping to scout out a few still-open lakes.

Several lakes are still open in the area, including Twin Lakes in Bridgeport, Virginia Lakes and Crowley Lake, according to an announcement by Mammoth Mountain. Several golf courses, also on Roe’s to-do list, are still open.

In Mammoth Mountain, the closures include the Mammoth Bike Park, Via Ferrata adventure center and the scenic gondola ride, which will remain closed for the summer season. Camp High Sierra, and most camping spots in Mammoth Lakes, also closed, as well as Tamarack Lodge, at least through Sept.  17.

Reho couldn’t speculate whether the closures would be extended, but did note that it’s the time of year when Santa Ana winds – which can cause fires to rapidly spread – are most prevalent.

“Weather conditions and climate change, what we have seen, are not trending in the right direction,” she said. “Climate change continues to be a reality in the Forest Service, that’s something we monitor closely. It’s hard to speculate whether or not this will be a yearly thing.”

She said there’s an estimated 22,000 fire fighters deployed across the Forest Service at the moment. Many first responders are also helping in the aftermath of Hurricane Ida that devastated the Louisiana area, she noted.

She also noted that National Parks in the region – which fall under the U.S.  Department of the Interior – may not be closed and people should check with those areas if they have plans in coming weeks.

The California Department of Fish and Wildlife on Wednesday, Sept. 1, added a closure list of 34 properties that lie within or near U.S. Forest Service boundaries. Those closures are also due to the extreme fire conditions and are expected to last at least until Sept. 17.

Snow Summit operators scrambled this week to get the word out to visitors that their mountain bike trails, hiking trails and rock climbing areas would be closed.

“Thankfully, we got the news out fairly early yesterday with our messaging platforms,” said Big Bear Mountain Resort spokesman Justin Kanton. “It’s not that we want to close, or we don’t want people enjoying the forests, but given the resources required to fight the fires throughout the state, that’s what the Forest Service determined to be the best course of action.”

Other areas within Big Bear remain open, including the golf course operated by Big Bear Mountain Resort, but not on the National Forest land, as well as the lake.

U.S. Forest Service listed several reasons for the closures, including temporarily reducing the number of people in forest areas to minimize the likelihood that visitors could become trapped during emergency circumstances and decrease the potential for new fires starting at a time of when firefighting resources are already taxed.

The drought conditions – with little rain this summer – was another factor in the decision.

“Due to state-wide conditions, any new fire starts have the potential for large and rapid fire growth with a high risk to life and property,” officials said in their announcement. “Forecasts show that conditions this season are trending the same or worse as we move into late summer and fall.”

John McColly, director of marketing for Mountain High in Wrightwood, said although there’s no current fires in the region, he understands there’s high fire dangers and resources are limited.

“Frankly, it’s going to be more common as long as we have these big fires,” he said. “We haven’t had much rain this season, that’s contributing for the fire danger.”

McColly said it would have been a busy weekend for the resort, which had to shut down its disk golf course, restaurants and cancel a band that was supposed to play Saturday evening.

With coronavirus closures last year, wildfires the year before that, and now the most recent closures, local resorts have had to pivot quickly to adapt to swift closures, he said.

“We’re hanging in there.”