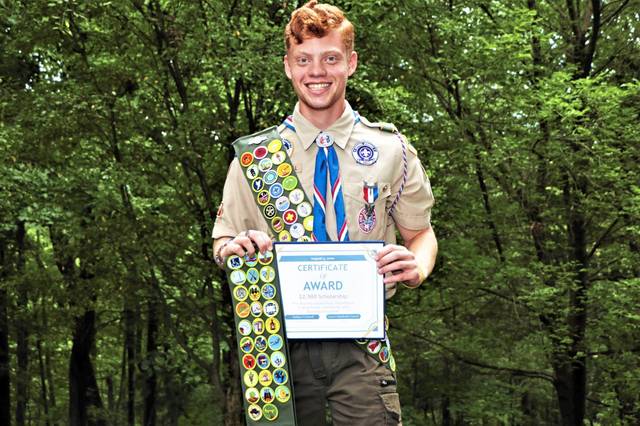 Editor’s note: Neighbor Spotlight is a monthly feature that aims to let our readers learn more about the people in their communities who are working to make them a better place, who have interesting stories to tell or who the community feels deserve “15 minutes of fame.” If you would like to nominate someone as a Neighbor Spotlight, see pinecreekjournal.com, select the “Post Story” button in the upper right corner and complete the form to publish your nomination. Questions? Email Neighborhood News Network editor Katie Green at kgreen@triblive.com.

Earning the 21 merit badges needed to achieve the rank of Eagle Scout is no small feat — only about 8 percent of the more than 2.2 million Boy Scouts in the United States make it to the top.

Pine-Richland senior Nathan Cottrell figured there was no point in stopping at the minimum number of merit badges needed, so he went on to earn all 137 available in Scouting along with 23 Eagle Palms, which is the most a Scout can receive.

The bronze, silver and gold Eagle Palms are awarded to Scouts for every five merit badges earned beyond the 21 required to become an Eagle Scout.

“It’s a great feeling to earn the merit badges needed for Eagle Scout, but for me, it was all about the challenge of learning the things needed to earn those badges,” said Cottrell, 18, of Pine Township. “I saw working on each merit badge was another opportunity to learn something new.”

The public service project Cottrell completed to earn the rank of Eagle Scout was conceived after learning about a family friend’s daughter who underwent treatment at UPMC Children’s Hospital in Pittsburgh.

“One of the things the girl wanted to do while she was in the hospital was read books,” Cottrell said. “But the difficulty with that is you can’t sanitize a paper book, so passing them from patient to patient isn’t good in a hospital setting.”

Over a three-year period Cottrell planned and executed a project to raise money for electronic book readers for young hospital patients.

“While I was working on my project, Children’s Hospital kicked off an electronic book program to do the same thing I had proposed,” Cottrell said. “So it was very good timing to be able to add to what the hospital was already trying to do.”

Cottrell organized car washes, bake sales and spaghetti dinners along with soliciting donations from more than 200 people to raise $5,200, which was enough to equip the hospital with a dozen Amazon Fire e-Reader tablets along with charging stations for the devices.

The hospital also received a $100 gift card for each reader to buy books to load onto the devices along with $1,000 to replace items and expand the library.

“I had a chance to visit the library, and it was really exciting to see kids using the ebooks,” Cottrell said. “I realized then that the work we did to get them was filling a need.”

In addition to awarding him the rank of Eagle Scout, the Boy Scouts of America Laurel Highlands Council presented Cottrell with a $2,500 college scholarship.

Cottrell is interested in pursuing a career in architecture because of its “blend between practicality and design” but has not yet selected a college.

“I took a CAD (computer assisted design) class in my freshman year and admired the problem solving that it involves,” he said.

Cottrell entered Scouting as a Tiger Cub while in grade school and continued on into his teens even after other
activities competed for his time and energy.

“I always found time for Scouting because I really like to put myself in situations that I would otherwise feel uncomfortable with,” he said. “In Scouting we learn all these skills about camping, survival and first aid. But it’s not as much about the physical knowledge you gain about how to tie knots or perform tasks, it’s more about things like how to approach an adult and how to set goals for yourself.

“I can’t see myself being the leader I am today without Scouting. But I didn’t go into leadership positions thinking being a good leader is my goal. It’s about helping the troop and helping other people.”

His ability to lead others will be put to the test this spring when he serves as the student producer for Pine-Richland’s spring musical.

Cottrell said he is ready and eager to take on the responsibility.

“I didn’t reach out and ask to do this,” he said. “They came to me and said they needed someone for the position and that I stood out because of the leadership I’d demonstrated stood out. I firmly believe that is the result of Scouting.”

In addition to his involvement in the school’s theater department, Cottrell will serve as the Pine-Richland chapter president for Best Buddies International, which works to end the social, physical and economic isolation for people with intellectual and developmental challenges.