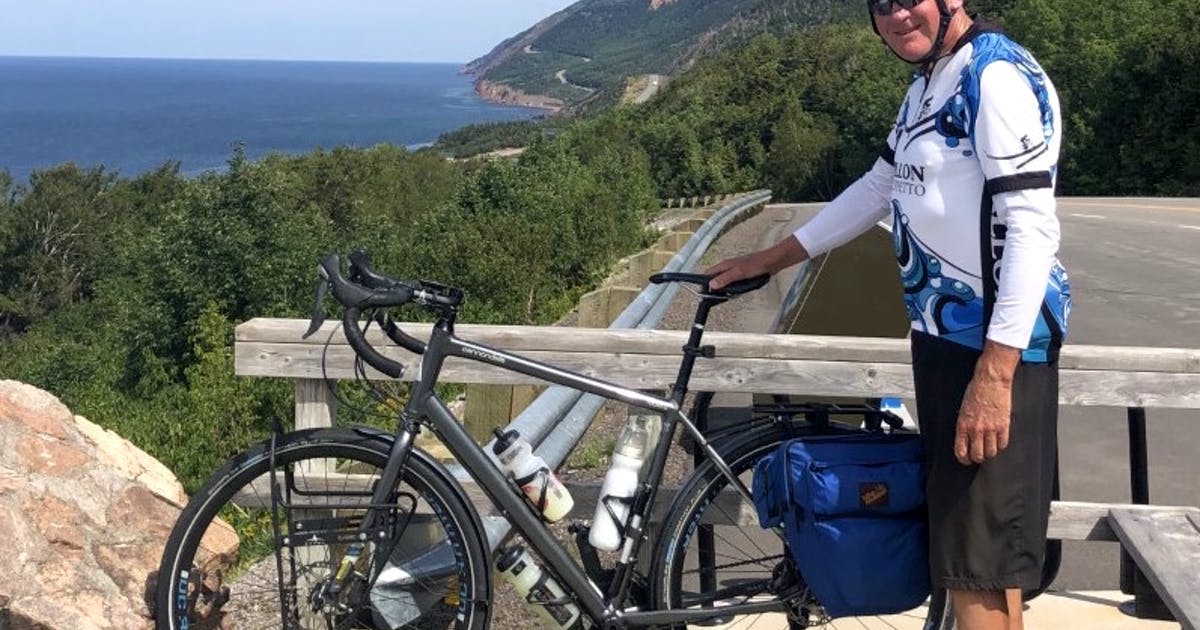 COXHEATH, N.S. — As Chris MacInnis worked his way up Cape Smokey with wind blowing directly in his face last weekend, he couldn’t help but think of the challenges he’s overcome on the road.

From Les Suêtes winds to downpours, a storm, and even a close call with wildlife over the years, the Coxheath product has pushed himself to the limit.

“(Last weekend) I went three-quarters of the way up Cape Smokey and that was enough for me,” said MacInnis. “It was really windy, and I thought it was best to walk the last quarter.”

While weather conditions — other than the wind — were near perfect Saturday, some may question why MacInnis, at the age of 70, was on a bike, pedalling his way up one of the more challenging mountains on Cape Breton Island.

The retired educator set out on the highway to accomplish a feat he never expected — cycling the entire Cabot Trail for the 45th consecutive year.

MacInnis first completed the near 300-kilometre trip in 1976 with longtime friend Joe Reid, originally of Sydney and now living in the Halifax area, and hasn’t missed a year since, cycling roughly 13,815 kilometres during that time.

In fact, MacInnis has enjoyed cycling the famous Cabot Trail so much he completed the gruelling journey twice in 1989 — once with his brother-in-law and once with a group of cycling enthusiasts.

Despite the ups and downs the Cabot Trail provides — MacInnis has never regretted jumping on his bike and hitting the open road with the scenic landscape in his mind.

Originally from Halifax, MacInnis spent the majority of his life living and working in Cape Breton.

Along with having a 42-year career in the education system, MacInnis also officiated minor hockey in the early 1970s, which was one of the reasons he decided to give cycling a chance.

“I found for skating, when I went back for training camp and preseason clinics, my legs were killing me, and I didn’t know what to do about it,” said MacInnis.

“I wasn’t a runner, and in the winter I was fine because I was skating and working a lot of games, but it was the off-season that really set me back for the next hockey season.”

It wasn’t until the 1976 Montreal Olympics when MacInnis realized what he could do to stay in shape and be better prepared for officiating.

“The first week they had road racing and I was watching it on television and it was then when I thought that cycling would be a good exercise,” said MacInnis, who was also involved in the local basketball scene.

“It was really Joe (Reid) who got me started in the sport and helped me along the way.”

A short time later, MacInnis, Reid and two other friends made the decision to cycle the Cabot Trail. The four hopped on their $100 bikes and went off on a four-day trip, but not all would finish what they started.

“It was one of the hardest trips I ever had, that first one,” said MacInnis. “Only Joe and I made it all the way around the Cabot Trail. The other two couldn’t finish, but we had the motivation to complete what we started.”

As a then-elementary school physical education teacher, MacInnis felt the need to set an example for his students. After finishing his officiating career, he expanded his cycling season beyond the typical riding months to year-round.

Meanwhile, MacInnis and Reid continued to share the experience of the Cabot Trail together for a few more years, before MacInnis eventually began taking on the challenge with different groups — both local and provincial — and for several years completed the trip on his own.

“I just really love cycling and once I started doing it I couldn’t stop myself from keeping it going,” said MacInnis, who retired as vice-principal at Memorial High School in Sydney Mines in 2017, a position he held for 22 years.

“It’s really the satisfaction of knowing that I have been able to complete it so many times and that not many people probably have tackled it or would be able to do it.”

Over the course of his trips, MacInnis began spending nights at campgrounds which necessitated carrying his camping gear. Today, he mostly sticks to overnighting in motels.

John MacInnis, one of Chris’ two sons, considers his father’s determination “quite impressive.”

“It’s very impressive from the view of longevity and how he stayed healthy and how he stays motivated to do it,” said John MacInnis, who along with his brother and sister-in-law joined Chris for his 30th anniversary trip in 2006.

“It wasn’t easy when we did it 15 years ago, we had to prepare physically and mentally, and it’s definitely still not easy today but he knows all the ins and outs now and he has it under control.”

Chris MacInnis said sharing the anniversary ride with members of his family was a special moment and one of the highlights of the past 45 years.

Anyone who has travelled the Cabot Trail knows there’s no shortage of winding roads that can easily cause issues for motorists and cyclists alike.

“I’ve done it so much, I know what’s around every corner,” said MacInnis, stating there were trips when he never stepped off his bike on the road.

“I think the challenge is really when you don’t know. You think it’s going to finish around the next bend, but it doesn’t, and you keep going and going. It can be tough, for sure.”

The two major challenges are the mountains — Cape Smokey, North Mountain and French Mountain — and the unpredictable weather Cape Bretoners know all too well.

“The mountains are one thing, but I find weather conditions a bigger challenge now,” said MacInnis, noting he’s biked in rain and wind over the years.

“It’s the wind you have to watch because it’s either blowing in your face, blowing behind you or beside you. If you’re in the Cheticamp area and the Les Suêtes come, they can easily put you in the ditch and that can be dangerous for a lot of reasons.”

Aside from weather conditions, which overall worked in MacInnis’ favour this week, wildlife is another challenge on the Cabot Trail. He recalls a close call with a moose.

“I was going down one of the hills and the guy I was with asked me my thoughts on the moose and I remember asking him what moose?” laughed MacInnis, noting he has also seen several coyotes on his adventures.

“He told me that there was a moose standing right on the side of the road and I went right by it — I didn’t see it yet, so it goes to show you that you have to pay attention.”

After months of preparation, MacInnis set his sights on the Cabot Trail last week, leaving Baddeck around 9 a.m. on Saturday. He travelled 110 kilometres to the Broad Cove Campground, arriving at his destination shortly before 6 p.m.

“A lot of cyclists would do that ride a lot faster than me, but I stopped to eat, and I stopped to take breaks, I was in no hurry to get where I was going, I just wanted to enjoy the moment,” said MacInnis.

On Sunday, MacInnis left the campground and was planning to finish day two of his four-day journey in Pleasant Bay, which included a trip up through Neils Harbour and Dingwall and the challenge on North Mountain. He finished with 75 kilometres on the day.

“I took my time and went slow,” said MacInnis. “I wanted to see what those communities were like and what they had to offer. I was in no rush and I enjoyed it.”

MacInnis, who in previous years has completed the trip in two or three days, continued his ride on Monday, cycling 50 kilometres from Pleasant Bay to Cheticamp.

He finished the trip on Tuesday, riding close to 80 kilometres from Cheticamp to the Red Barn Gift Shop and Restaurant just outside of Baddeck. The total trip was calculated at 315 kilometres.

“A lot of people say you should pedal the Cabot Trail clockwise, but I like to go the other way,” said MacInnis, who finished cycling around 4 p.m. Tuesday.

“I probably did the Cabot Trail clockwise maybe three or four times, but I find the downhills better — the hills are a little more forgiving.”

While MacInnis completed the latest trip by himself, John admits the family was “a little bit” nervous about him doing the trip alone, especially given his age.

“I think I’d be lying to you if I said we didn’t worry about that,” said John MacInnis.

“I know my mother isn’t a big fan of him doing it on his own, but he’s been biking forever, and he knows every square inch of that road and where to stop in different places so that makes it a bit easier on us.”

Chris MacInnis himself acknowledges the danger.

“I enjoy doing it alone because I look at it from the viewpoint I can stop when I want, I’m not looking for someone, I’m not holding anyone up and I’m not going too far ahead of the other people,” said MacInnis.

“I’d rather do it alone, but I’m in my 70s now and let’s just say something went wrong coming down one of the mountains and nobody saw you fall, how would they ever find you?

“Cellphones are good, but there isn’t a lot of service along there, not yet, so I do think about things like that in the back of my mind, but I still like cycling.”

When asked if he planned to complete a 46th trip, MacInnis couldn’t give a definite answer.

“I don’t like to say I’m not going to do it, or I will do it,” said MacInnis. “I always like to let it ride until the next spring and summer. I hate to put pressure on myself by answering a question like that too soon.”

MacInnis said he has a map of Cape Breton with thumbtacks indicating where he’s been on the island on his bicycle. Among the locations he still wants to visit is the Isle Madame area of Richmond County.

John MacInnis admits he’d be surprised if his father didn’t do the Cabot Trail next year but noted it will depend on his health and determination.

“As long as he’s safe and he can physically do it, I can’t see why he wouldn’t,” said John MacInnis. “He’s proven that at age 70 he was able to get through it again. I talked to him every night after his rides and he seemed to be feeling pretty good.”

Following Tuesday’s completion, MacInnis said he felt great, noting he never had any problems going up and down the stairs of his home, meaning his legs weren’t sore.

MacInnis doesn’t consider himself any different than anyone else. In fact, he offered some advice to those who may be interested in cycling.

“If you stay consistent with your cycling or workouts and not take days off you will never be out of shape,” said MacInnis. “I go cycling every day I have the time and I try to stay in the best shape possible — hopefully it will help me live longer.”

Jeremy Fraser is a sports and breaking news reporter for the Cape Breton Post. He’s been with the publication for four years. Follow Jeremy on Twitter @CBPost_Jeremy.