In previous articles, we reported on the fatal fall of the Iranian mountaineer Mehri Jafari and how the Iranian party she was climbing with did not bother to look for her after the fall. 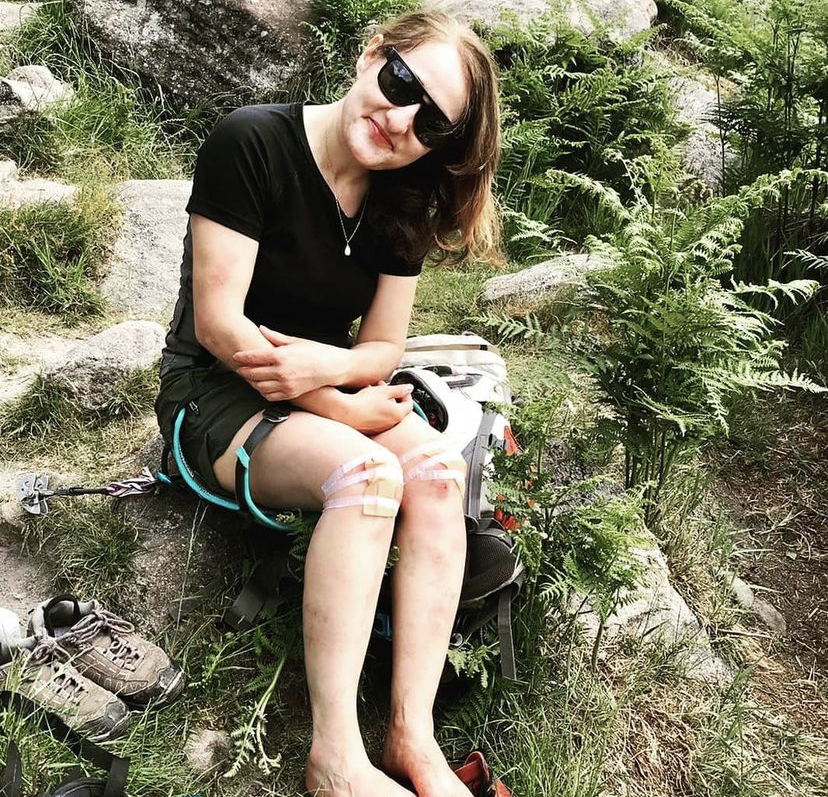 The Hungarian mountaineer Albert Kovacs spoke with Explorersweb after returning home. He gave us more information about Jafari’s fall and the search, or non-search, for her. He and partner Peter Vitez saw her fatal accident: They were just 50m to one side of her route when it happened.

Kovacs and Peter are currently tackling the Snow Leopard challenge. Of the five highest mountains in the former Soviet Union, they have already climbed Peak Lenin and Khan Tengri. This was not the first time that they had ventured to Pobeda.

“It is a very demanding mountain,” said Kovacs. “A few years ago, five died of the 20 who tried to climb it. And about four years ago, not one of the 28 climbers on the mountain managed to reach the summit.

On the day of Jafari’s accident, Kovacs and Vitez were doing their acclimatization round. In fact, the two Hungarians had left Base Camp before the Iranians. The Iranian group of five climbers left Base Camp at 2 pm when the weather was very hot. Mehri Jafari was climbing with her compatriots, although she was an independent climber and not part of their group.

Kovacs and Vitez were already in C2. They liked to transfer small amounts of gear gradually to higher camps. Below them, some 200 to 300m away, the Iranians were climbing. 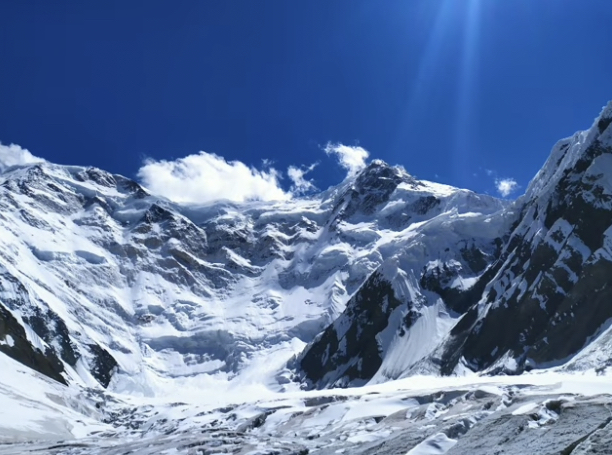 From C2, the Hungarians began to descend to C1, planning to go back up the following day. At around 4,400m, they crossed paths with the Iranians. They could see that Jafari had a hand injury and that she was slower than the rest of the group. She advanced slowly and seemed uncoordinated from fatigue.

The Iranians, including Jafari, were carrying backpacks weighing about 25kg each. They were climbing single file, glued to each other but not roped together. The Iranians told them that they wanted to get to C3, but this seemed strange to Kovacs, as it was late and they looked tired. In fact, the Iranians stopped that day not much above C1. 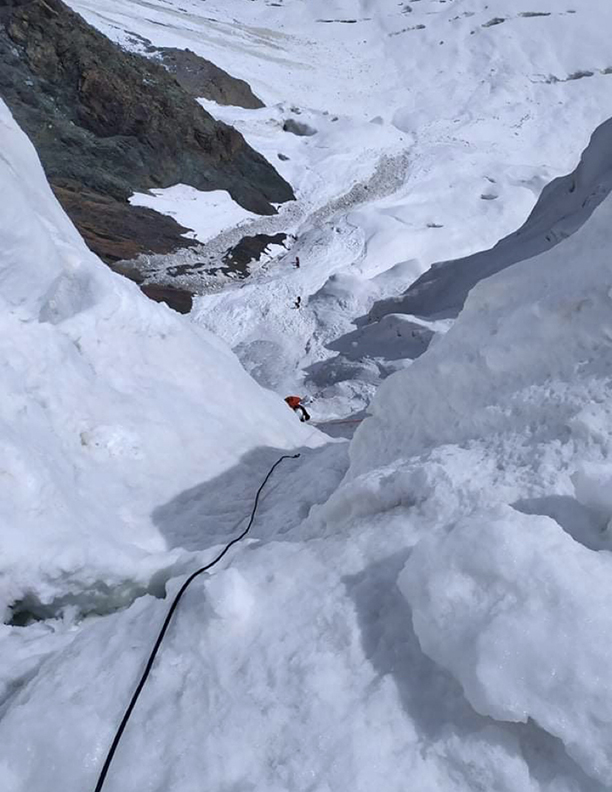 Around 2 or 3 pm, Jafari turned around, and that is when she fell. Exhausted, she took the wrong ridge down and slipped. She fell from a height of 6,300m, when Kovacs and Vitez were at about 6,000m, just to one side. She bounced down the side of the mountain, without making a sound, and disappeared onto the Diky glacier far below. Horrified, the Hungarians saw it all.

At the time, she was not visible to the other Iranians. Base Camp informed them of the accident. 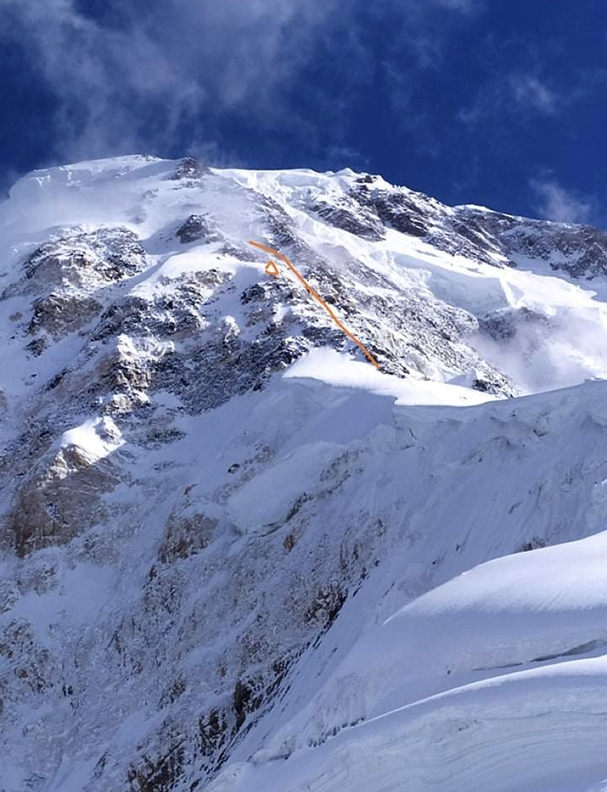 Kovacs and Vitez were at the orange circle, when an exhausted Mehri, orange line, took the wrong ridge and fell. Photo: Albert Kovacs

The Iranian group did not reach C5 that day but stayed below the plateau. In the afternoon, the weather changed abruptly. Visibility dropped to zero, and night fell shortly after. The soonest anyone could search for Jafari was the following morning.

No one from Base Camp came up for Jafari, Kovacs says, nor did the Iranians come down to look. However, they couldn’t have accomplished anything if they had. They didn’t have enough rope or proper gear and were not technically able to conduct such a search. Even for an experienced hand, finding Jafari on that glacier would be like finding a needle in a haystack, said Kovacs.

Jafari’s fall was impossible to survive since she tumbled several hundred metres. Kovacs said that the ropes were fine up to 6,000m, but she was above that.

When they reached Base Camp, the two Hungarians and Jafari’s friend Alex Stone flew by helicopter to the Diky Glacier to try to find her. Alex Stone himself had been a good friend of Jafari. He had been nearby trying to climb Khan Tengri. 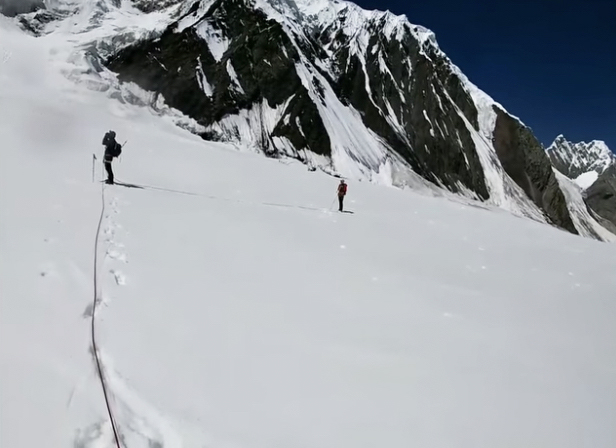 After the helicopter dropped the three of them on the glacier, they immediately roped up. Kovacs was in front, Stone in the middle, and Vitez in the back. The glacier’s surface was very uniform, so hidden crevasses could be anywhere. Before each step, Kovacs probed for a crevasse. They were very afraid, and it was very dangerous. 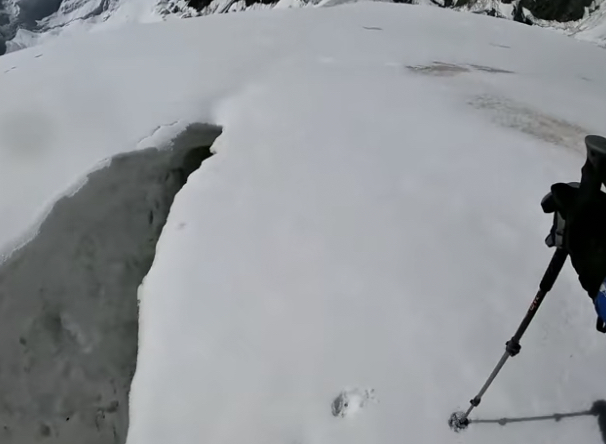 A crevasse on the Diky glacier. Photo: Albert Kovacs

On the glacier, they saw a sleeping bag. They approached it in the faint hope that Jafari was inside it and miraculously alive. But she was not there. The wind had simply carried the sleeping bag to that spot, about 700m from the wall where she fell. 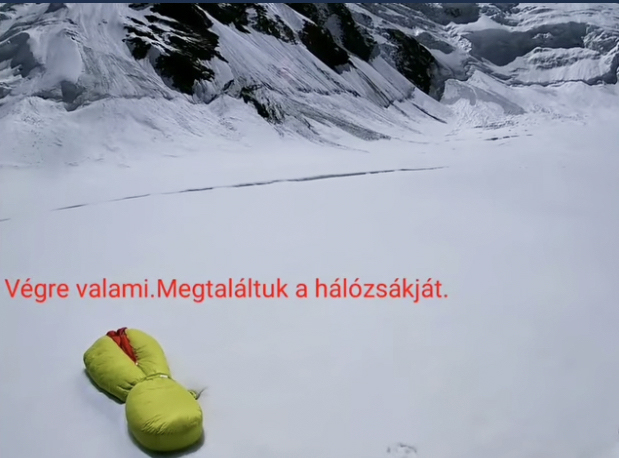 They also saw something elsewhere red or orange at the foot of the mountain, about 700m away. But when they investigated, it turns out to be just an oddly colored rock. 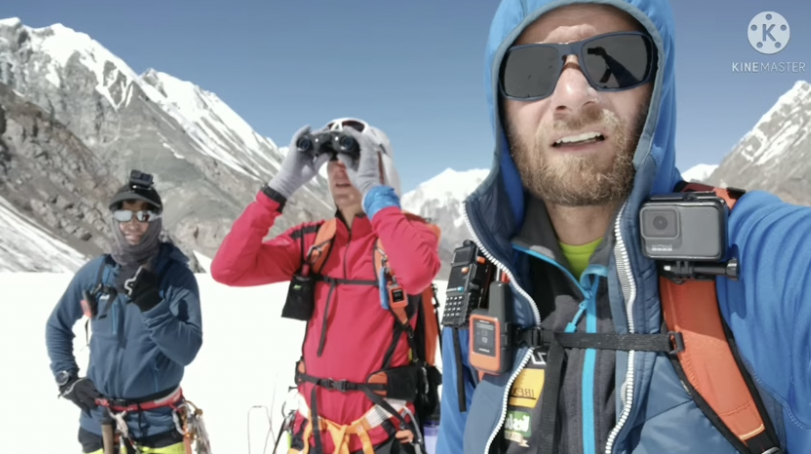 A lot of snow fell on the mountain shortly afterward. Kovacs believes that likely no one will ever find Jafari.

About the fall of Rezah Adineh, Kovacs comments that unfortunately he was not surprised. Like Jafari, Adineh was not technically prepared to climb that mountain.

About the death of Valentin Mikhailov, Kovacs wondered whether a rope would have saved him, had he been tied to others. However, as Konstantin Markevich previously suggested, it is also possible that everyone on the rope would then have fallen through the cornice, softened by the daytime sun.

Kovacs couldn’t add anything about Azat Agzamov, who disappeared on Khan Tengri, since Agzamov was in another Base Camp on the Kazakh side of the mountain.

The added hazard of climate change

Climate change has affected these mountains dramatically. Night temperatures never dropped much below zero. In previous years, it was consistently about -10˚C overnight. During the day, under the broiling sun, it was very hot — sometimes 25˚C.

Fatalities now occur on these mountains almost every year. Climbers are less skilled, and the presence of commercial groups is noticeable by the garbage they leave in Base Camp. 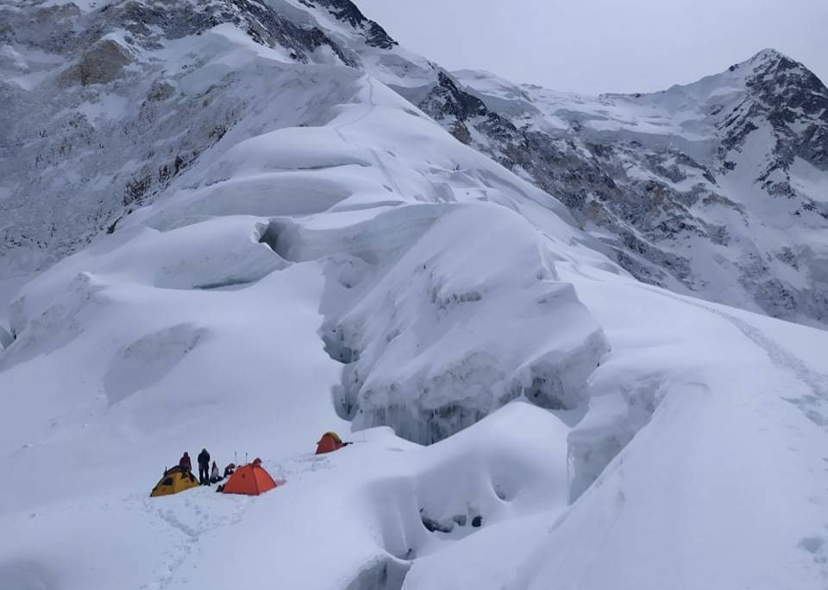 Kovacs says that when they return to Pobeda next time, they will come with a larger group. Pobeda is a very complicated mountain for only two climbers. However, next year, the Hungarians will go for Ismoil Somoni Peak and Korzhenevskaya.

According to Kovacs, client climbers do not generally show much interest in helping search for missing people or aiding those in trouble. When they were at 5,800m on Peak Lenin a few years ago, an Austrian mountaineer came down with altitude sickness. Everyone passed him without stopping. Kovacs and his partner were on their final summit push at the time, but as experienced mountaineers, they dropped their quest and helped the Austrian descend. 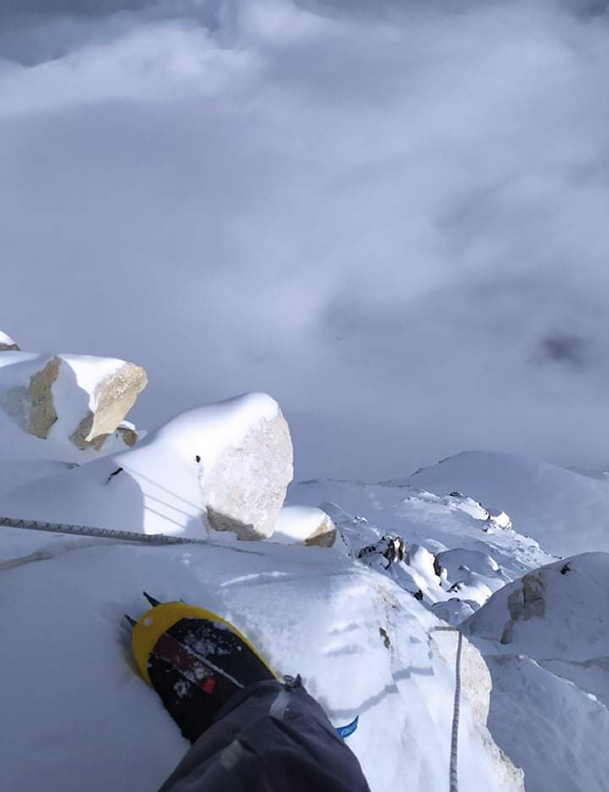 @KrisAnnapurna reports about outdoor activities, current expeditions, and stories related to the history of mountaineering in the Karakorum, Himalaya, Tien Shan, and other ranges.