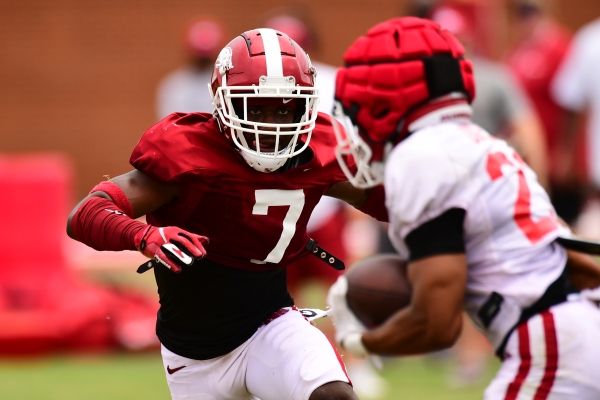 A group-by-group breakdown of the Razorbacks entering the 2021 season:

However, part of that is because he will likely be more willing to run when his reads don’t lead to an open target, or throw passes away when he’s in jeopardy. Jefferson had a huge outing at Missouri in his only full game as a collegian, accounting for 4 touchdowns and 306 yards. He became the first Razorback with 3 passing touchdowns and a rushing touchdown since Ryan Mallett in 2010.

Malik Hornsby was up and down in camp, but he appeared to be holding off Kade Renfro, John Stephen Jones and Lucas Coley for the top backup role. Running quarterbacks should give the Razorbacks a dimension they have lacked since Matt Jones tore it up as a dual threat in the early 2000s. Franks’ 204 rushing yards last year were the most since Jones.

This group took some hits during camp, with returning starter Trelon Smith missing time with an undisclosed issue. Additionally, freshman AJ Green sat out for a span that included missing the first scrimmage, and sophomore speedster Josh Oglesby had a foot injury Aug. 17. That combination of events thrust true freshman Raheim “Rocket” Sanders into a first-team slot, likely ensuring the 6-2, 225-pounder would be in the rotation early.

Smith’s credentials are established as a 710-yard rusher last year who essentially outperformed 1,300-yard rusher Rakeem Boyd starting early in the season. Smith’s 5-9, 190-pound frame withstood the rigors of inside-outside duty, and he added another 159 receiving yards and performed well in pass protection. Dominique Johnson could be a banger at 235 pounds, and Javion Hunt is a quality freshman.

T.J. Hammonds repped more at receiver but could always return to the backfield. Position coach Jimmy Smith had a loaded group to open camp, and that looks like a good thing.

Position coach Kenny Guiton and his charges say there will be plenty of options to take pressure off top target Treylon Burks, who made a name for himself as a sophomore with 51 catches for 820 yards and 7 TDs in what amounted to 8 games. Whether or not a consistent threat emerges elsewhere will only be determined on game day.

Trey Knox is aiming to bounce back from a disappointing sophomore season, while senior De’Vion Warren is coming off knee surgery. Tyson Morris and Kendall Catalon look like players whose contributions could improve dramatically.

Among the freshmen, Ketron Jackson and Bryce Stephens have had standout moments in camp. John David White wins a lot of one-on-one reps and just finds a way to get open. Jaquayln Crawford is one of the team’s fastest players, but he’s dropped a few balls in camp. Transfer Warren Thompson’s 6-3 frame looks the part, so perhaps he can help. The competition for the travel roster will be keen with 14 players vying for playing time.

Blake Kern and Hudson Henry, who split 10 starts at this spot last year, made a prime duo for new position coach Dowell Loggains to inherit. However, the experience behind those two is almost nonexistent.

Sophomore Nathan Bax logged 141 snaps of special teams work and two snaps on offense. Kern is the most physical of the unit’s blockers, but must be a more consistent pass catcher. Henry has strong route running and catching skills, but he has to improve as a blocker. Bax seems destined for a bigger role on offense. Redshirt freshman Collin Sutherland needs more weight and seasoning.

Walk-ons Nathan Johnson and Zach Lee and signee Erin Outley, who is recovering from a knee injury, are all freshmen. A series of other players made cameos here in camp, including quarterback Landon Rogers, whose athleticism might make an intriguing option at tight end.

There is serious veteran talent on the front five, led by bonus-year seniors Ty Clary and Myron Cunningham and fifth-year senior Dalton Wagner. The trio has a whopping 72 career starts among them, and junior center Ricky Stromberg adds another 19. The group has added substantial weight across the board in the past two years, when most of them were starting, which makes pushing 300-pound defensive tackles easier.

The depth at guard is interesting, including one of the top position battles of camp between 10-game starter Brady Latham and Luke Jones on the left side. When Stromberg was sidelined early in camp with a knee, Clary returned to center, where he had 23 career starters, and Beaux Limmer took first-team reps at right guard. Limmer made six starts last season.

The coaching staff expects Marcus Henderson and Ty’kieast Crawford to make pushes for quality time at the tackle spots, and they hope Jalen St. John and Ray Curry are not far behind. The group experienced some pass protection communication issues early in camp against what is considered a vastly improved defensive front.

No position on the team offers more intrigue than the defensive front. Perhaps there’s never been a more concerted one-year effort to upgrade with game-ready talent at one spot for the Hogs than here.

Ends Eric Gregory, Zach Williams and Mataio Soli, and tackles Isaiah Nichols and Taurean Carter combined for 20 starts last season, but they are all being pushed for front-line playing time. The same goes for Dorian Gerald, who had a sack-master reputation in junior college but has been saddled with injuries as a Hog. Gerald has had a strong camp. Transfers Tre Williams, Markell Utsey and John Ridgeway have all taken significant work with the first unit for new position boss Jermial Ashley.

Coordinator Barry Odom is preparing to run a mix of three-man and four-man fronts that will hopefully make blocking schemes harder to set and produce a much stronger pass rush than last season. Even if no prototype edge rusher emerges, the rotation up front should be as versatile, interchangeable and deep as it has in years.

The trio of Grant Morgan, Bumper Pool and Hayden Henry combined for 90-something percent off all the linebacker snaps last year and probably near 98% of all the meaningful ones. And all three of them battled injuries in 2021.

New position coach Michael Scherer said he’s comfortable to sub in the second unit and even the third, so that’ll be closely watched early in the season. Morgan’s experience and skill helped him slide around and past bigger blockers and led to 111 tackles. Pool played through rib injuries to post 101 tackles. Senior Deon Stewart went out with an undisclosed injury in the first scrimmage, and his timetable to return was unknown.

That makes Andrew Parker and walk-on Jackson Woodard the two mostly likely subs behind the big three. Giving reserves meaningful playing time in the opener against Rice could pay dividends down the road.

There will be experienced depth at every spot in the backfield and perhaps more than the Razorbacks have seen in a long time. Montaric Brown has the skill, athleticism and confidence to be one of the best cover corners in the SEC this fall. On the other side, LaDarrius Bishop and Hudson Clark have not been as consistent, but they added value in several games last season when CB depth took a hit.

Nickelback Greg Brooks Jr. made big strides as a sophomore and could be ready to emerge as a top-flight SEC cover man. Devin Bush, Khari Johnson, Nick Turner, Myles Slusher and Trent Gordon look like the next wave of depth at corner and nickel, and there is cross training at safety for the latter two.

Safeties Jalen Catalon, Joe Foucha and Simeon Blair are all big hitters, but their coverage skills must go up a notch if Arkansas is to improve on the back end. If younger talent such as Keaun Parker, Malik Chavis, Jayden Johnson and others emerge, then defensive coordinator Barry Odom and cornerbacks coach Sam Carter will have great opportunities to rotate and stay fresh.

Halfway through camp it seemed like the Razorbacks could have a new starter at every position on special teams with the exception of deep snapper Jordan Silver and kickoff man Vito Calvaruso. Arkansas fans might know Silver’s name, but he hasn’t received a ton of publicity, mainly because he has no bad snaps in his career in 334 plays.

True freshman Cam Little gained weight and strength between spring ball and camp and has added distance to his kicks. He could be a weapon like Connor Limpert a few years ago. Sam Loy had the edge at punter coming out of spring, but Reid Bauer has wrestled the starting job away from others the past two years. Both could wind up punting again this season. Bauer could wind up as the primary holder as well.

Greg Brooks Jr. could add a dynamism that was lacking at punt return last season after Treylon Burks stopped taking those reps. The primary kickoff returner was unsettled halfway through camp, but it seemed LaDarrius Bishop, Myles Slusher, Raheim “Rocket” Sanders, T.J. Hammonds or Josh Oglesby could wind up in that role. Only Hammonds has done it as a Razorback.

De’Vion Warren, a long-term kickoff returner who suffered a torn knee ligament on a return last year, will probably not reprise the role.