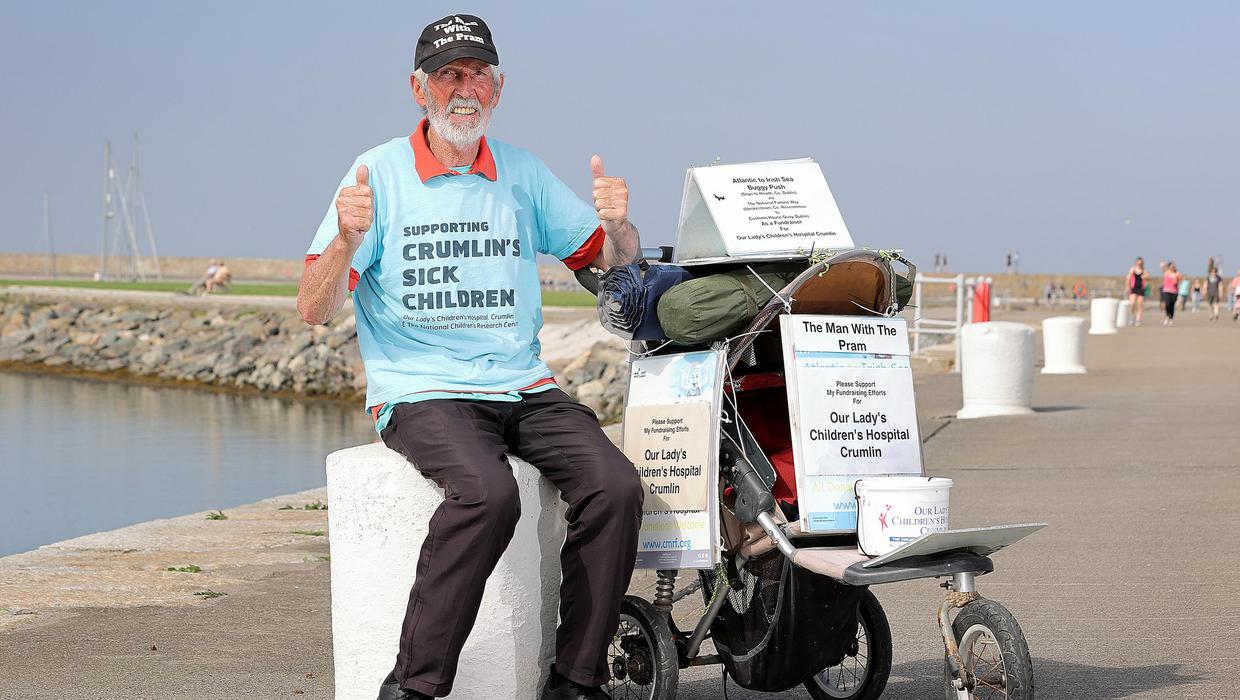 Meet the super-fit septuagenarian who has just completed a 250km walk pushing a buggy in aid of sick kids.

ugene O’Leary is not sitting by the fire in his slippers – instead he’s been out walking from Sligo to Dublin and even camping in the wild on the way.

Cork native Eugene (78) who lives in Howth, Dublin, took on the fundraising challenge for Children’s Health Foundation Crumlin in memory of his beloved daughter Helen, who was a patient at Crumlin Children’s Hospital.

Helen was born with a congenital heart defect and was fitted with a mechanical heart valve at the age of five.

Sadly, she passed away aged just 19, when she was no longer a patient at Crumlin.

Bad weather and back pain hampered Eugene’s journey, forcing him to take several breaks, but he still completed the trek.

He started off his journey in Sligo but by the time he reached Knockarush, near Boyle in Roscommon, it was “lashing down rain.”

He met some Good Samaritans who kindly gave him dinner and let him stay with them for two nights.

After three days of bad weather, Eugene took a train back to Dublin before returning to Boyle after a few days to finish his trip.

He then headed to Strokestown where he began walking along the National Famine Way which he told The Sunday World was “absolutely brilliant.”

Once again, another kind local put him up for the night nearby.

Eugene says he wasn’t worried about camping on the road as he has completed several other buggy pushes across the country and he’s “used to it” now.

However, he admitted his wife Claire sometimes has concerns.

His previous fundraisers include a 140-mile Galway to Dublin trek in 2019 and an eight-day journey from Slyne Head to Howth Head as well as cycling trips in South Africa, the US and Hungary.

In Mullingar, Eugene set up his tent on the green where he had a surprising encounter.

“I saw a man coming along the road, he walked right up to the tent. He said: “Are you alright in there?” Then he said: “Has it been very long since you were made homeless?!”

His longest single stint on the road was a whopping 47km from Cloondara in Longford to Mullingar Harbour.

“The following day was 27 miles, then two days 25 miles”, the hardy pensioner revealed.

But Eugene then started experiencing back pain from pushing the buggy loaded with his camping gear and needed a rest.

He said: “By the time I got to Kilcock, I had pushed myself too hard. I had to struggle on to Maynooth and it was really a struggle.”

Eugene took a train and Dart back to Dublin where he rested for a day before heading back to Maynooth and walking from there to Custom House Quay and on the final day, walked from the Famine Memorial back to Howth.

Eugene is now taking a well-deserved rest and plans to walk around the island of Terceira in the Azores in November – although this time he says he’ll “take his time”, with eight days to walk 72km!

Now download the free app for all the latest Sunday World News, Crime, Irish Showbiz and Sport. Available on Apple and Android devices