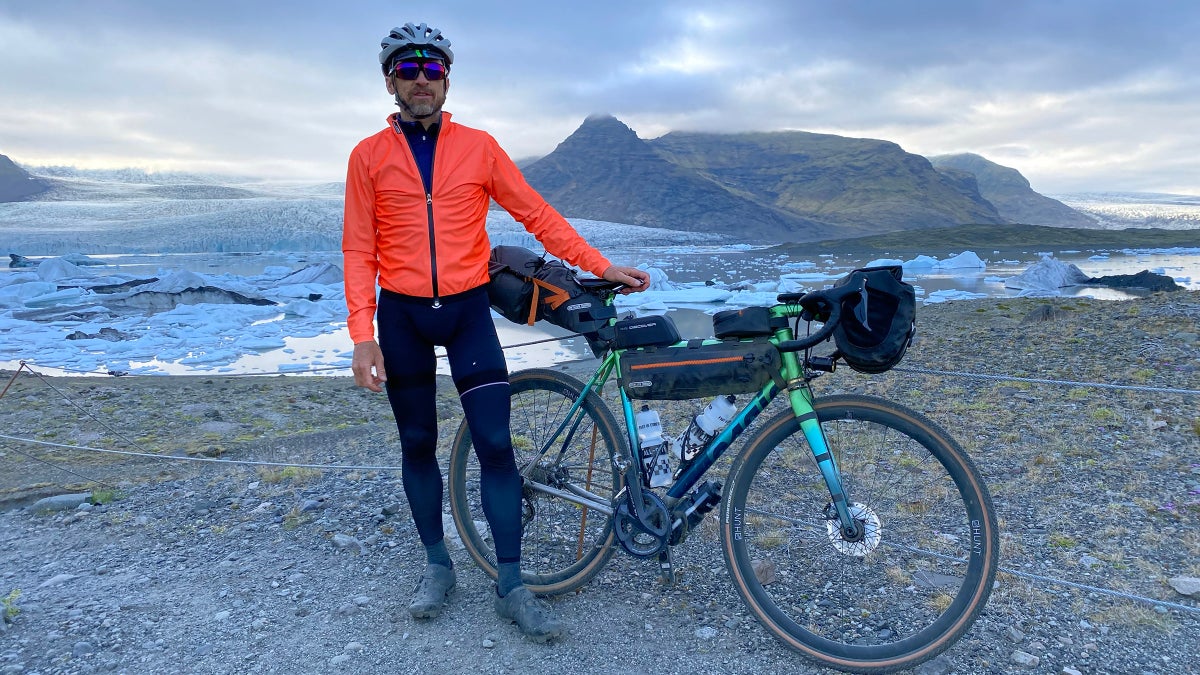 Editor’s note: We asked Chris for a ‘good, bad, and ugly’ report on his gear for Iceland, as we have done for races like Unbound Gravel or the Migration Gravel Race. He insisted that he was happy with everything he brought, having spent so much time testing and considering his options beforehand. So, enjoy this strictly ‘good’ report.

In July, I circumnavigated Iceland with my riding partner Matt Roy on as many dirt roads, gravel tracks, and paved backroads as we could piece together, avoiding the island’s famed Ring Road as often as we could.

As you might imagine, picking and packing gear for a 2,200-kilometer bikepacking trip around a nearly treeless island in the North Atlantic not far from the Arctic Circle, famous for frequent bursts of inclement weather, was a challenging task.

Weatherproof gear would be essential, and it would need to be packable and durable to boot. We would be camping, so our shelters and sleeping bags would need to be warm, light, and built for inclement weather.

I started by making a master list. I checked it twice. I checked it another couple dozen times. On every ride I took in Colorado, I ruminated about gear I’d need in Iceland: Which chamois would be most comfortable over 13 days of hard riding? Which would to be the most versatile outer layer? Did I need one base layer or two? Did I need a water filter or not?

I asked myself a thousand questions. I became obsessed with gear. I added a few things to my list, subtracted a few things. I bought some new things, but mostly I gathered pieces of gear that I loved and that had proven I could trust.

I ran my list by Matt, who had far more bikepacking experience than me. He made a list. He checked his twice. We compared notes.

Finally, after much deliberation and consultation, I made a pile of potential gear choices on my living room floor to see if, and how, they would fit into my bags. Total carrying capacity was my first concern. Could I fit everything I wanted to bring in the bags I had on the gravel bike I would ride? My next priority was deciding how I would distribute all that weight, and then how I could optimize access to frequently used items.

Because of the forethought I put into my choices, and perhaps due to a bit of luck, I was pleased with every piece of gear I eventually brought. I also used everything I carried, except for a few things I was glad I never had to use: tools and other repair items. And, surprisingly, I never donned the Patagonia rain pants I brought; it just never got that wet. (People say Iceland has all that rain… they’re liars! It only sprinkles.)

Ultimately, when fully packed with three full bottles and food in all the nooks and crannies, my bike and gear weighed about 47 pounds.

Here is a rundown of the pieces of gear I was most happy with.

This custom-built titanium all-road gravel bike was built to my specs by Mosaic Bicycles in Boulder, Colorado. They even gave it a gorgeous tri-fade paint job… themed for a bikepacking race in Ireland that I couldn’t do because of Covid travel restrictions.

This is my second Mosaic. The other one is a titanium XT-1, which I use for cyclocross racing. While each bike is built for a distinct purpose, their geometries, with regard to my touchpoints, are nearly identical.

So, despite the fact that I received the bike just weeks before I flew to Iceland, I knew I would love it: The bike handles nimbly and predictably, it fits me like a glove, it’s beautiful, it carries weight well, and it can run plenty of tire. (Mosaic states that it will comfortably fit a 38mm tire, though there is ample room for more.) Our route in Iceland traveled over a wide range of terrain and surfaces: smooth pavement, chip-seal, dirt roads, chunky gravel, and everything in between. The bike was the perfect machine for the job, deftly handling every surface and gradient, up or down, that Iceland threw at it.

As for the build, I never hesitated to outfit the bike with Shimano’s Ultegra Di2 electronic group. I’ve had years of positive experiences with this drivetrain, and it didn’t disappoint, even under the challenging conditions of dust storms, river crossings, grit, and rain. I never missed a shift, never had to charge the battery, never made a single adjustment. Moreover, I never had any concerns about its durability or reliability.

When it came to tires, I wasn’t about to try something new for a trip like this. So, I went with a mixed-surface gravel tire which has served me well for thousands of miles. The Pathfinder Pro runs fast, with low rolling resistance due to its raised center tread. It handles predictably and comfortably, blending suppleness and durability. Speaking of durability, over 2,200 kilometers of hard riding over every surface you can imagine, the tubeless tires had exactly zero punctures. I only put 5psi in one tire over the course of 13 days of hard riding — and I only did that because Matt put 5psi in one of his tires, also Pathfinder Pros in the 42mm width. I just didn’t want to feel left out.

What happens when you run out of room in all your bikepacking bags and you need a place to store your delicate, precious bananas? (Bananas are rare in Iceland, so when you see some, you buy them all.) Cargo bib shorts are the answer. The mesh side pockets proved useful time and again—for extra food, empty wrappers, mobile phone, clothing items that came on and off multiple times a day. The bibs and the mesh completed the trip fully intact, with no cuts, rips, or abrasions. And, just as importantly, they were comfortable. When you aren’t able to wash your bibs for multiple days at a time, you have to choose a chamois that won’t bunch or pinch or squish, even when saturated with sweat, grit, and grime. Panache’s Growdy Bibs remained comfortable and durable, not to mention utilitarian.

The German company is long known for its durable touring bags, and its line of bikepacking bags follows that design philosophy. I used four of their bags: the new Handlebar Pack QR, Seat Pack (16.5L), Frame Pack Toptube, and Cockpit Pack. The word “waterproof” is part of the brand’s name, and that fact held entirely true for all the bags; nothing penetrated their walls, water or dirt. You could argue they are “overbuilt” and a bit on the heavy side; in Iceland’s reputedly harsh environment, that was okay with me. I’d rather carry a few extra ounces of durable fabric than arrive at camp only to find my down sleeping bag was drenched and devoid of loft or warmth.

There is an 11lb limit for the Handlebar Pack QR , but I found it to be stable even when fully stuffed. Most importantly, the roll-top closure is easy to access while riding and it fits well between drop bars, leaving room for your hands to rest on the tops or drops just as easily as the hoods. I found the mesh side pockets to be incredibly useful, and often shoved food, clothes, phone, or other gear in both sides, particularly items that I frequently wanted quick access to.

Light, packable, weatherproof — it’s the holy trinity of cycling outerwear. So, when I was selecting clothing for this trip, such versatility was paramount. Each piece needed to serve several functions.

Though I’ve had this Assos jacket for a few years, I haven’t had many opportunities to try it out in Colorado, as we don’t often get the grey, misty weather that I felt this jacket would be best for. But I know a place that does… The fabric is both weatherproof and insulating, and packable and light. Ultimately, it became my layer of choice day after day, fighting back against the wind, mists, and chill.

I don’t often don such bright outer layers, but in this instance, I considered it an added benefit. Many of the roads we traveled were narrow and the skies were frequently overcast, so the bright orange offered an extra element of visibility that gave me peace of mind.

Speaking of being seen, I wanted to run a headlight for added visibility. The Beacon runs off a dynamo hub, so it only lights when the wheels are turning, but that wasn’t a problem since it never got dark.

What’s nice, especially for trips during which electricity might be in short supply or nonexistent, is that the Beacon is more than a light. The USB port on the back of the weatherproof case can be used to directly charge your phone, GPS, or any other USB device. I chose to bring an auxiliary battery pack, charge it during the day, and then used it to recharge my devices at night.

Though I didn’t use this feature, the USB battery pack can also be connected to maintain bright, flicker-free light even when stopped or riding slowly. Dynamo power replaces battery power until reaching a speed when all power is provided by the dynamo and the battery is no longer used.

I seldom sleep well, even in a comfy, king-size bed, so sleeping on the ground always brings about some trepidation. Slowly but surely, I’ve found a kit that works for me. When it comes to bikepacking, a compromise between comfort and packability must be struck. The ThermaRest NeoAir sleeping pad is remarkably light and compact, and offers a comfortable sleeping surface.

Mummy bags make me miserable. I’ve recently discovered the Sierra Designs Nitro 800 20-degree quilt, which blends a fitted foot box with an open blanket-like torso. It allows me to move around, sleep on my side or stomach, and not feel claustrophobic.

Some consider a pillow to be a luxury. I don’t. The Nemo Fillo Elite is plush, weighs next to nothing, and packs to the size of a small apple. Because it helps me sleep so much better than any stuff sack filled with clothing ever could, it helps me recover. And that’s priceless and essential in my book.

Finally, I needed to stay dry. Strangely, though I hate mummy bags, I can tolerate a bivy sack. The Outdoor Research Helium Bivy is tiny — about the size of a coffin. That doesn’t sound very nice, but I wasn’t spending a whole lot of time in it. It packs small, about the size of a very big burrito. It sets up faster than lubing a chain; just pull it out of a stuff sack and throw it on the ground. And the small segmented carbon hoop provides for some breathing room, ventilation, and visibility for starry nights.