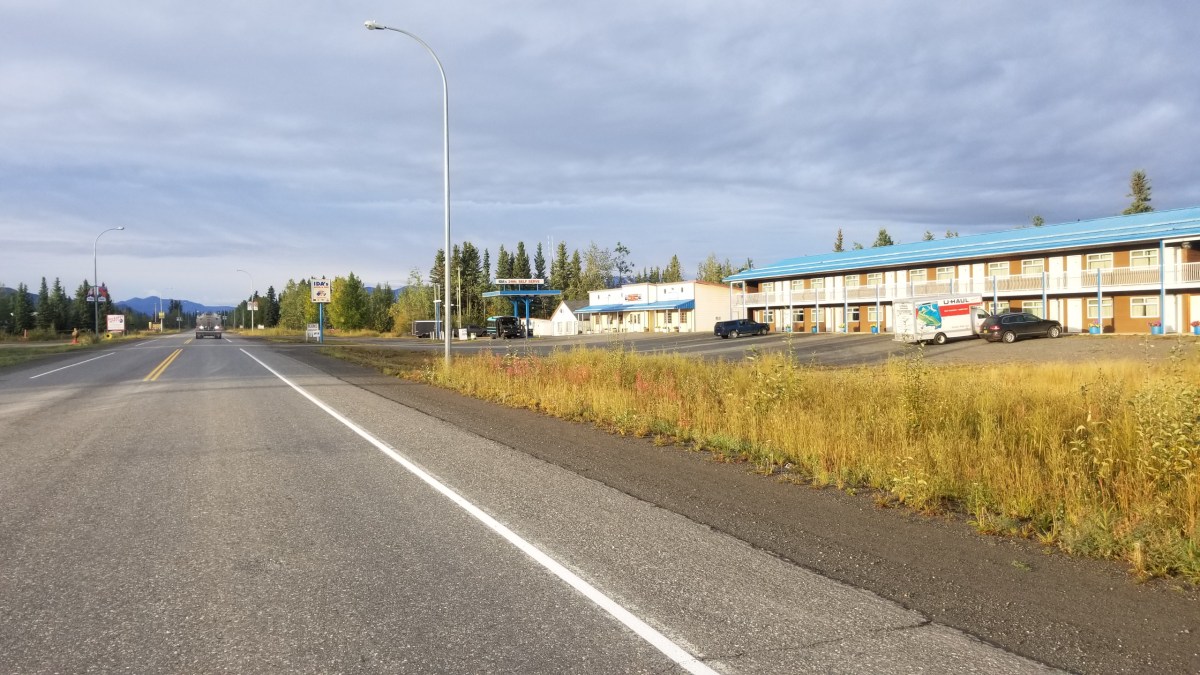 BEAVER CREEK, Yukon Territory, Canada – At 8 a.m. Tuesday, this once summer-busy chokepoint on the Alaska Highway between Canada and the 49th state looked a lot like the ghost town of Iditarod far to the north in Alaska’s Interior.

All that moved was a lone tanker truck that came, went and was gone quickly like the dog teams that pass through the once famous Alaska mining community during the Iditarod Trail Sled Dog Race.

Canada might have reopened its borders to U.S. citizens – or at least U.S. citizens showing proof of vaccination and a fresh, negative test for the pandemic disease COVID-19 – but there is no hint of any last-minute rush to visit The Last Frontier.

Then again, this corner of the Yukon has been dying for a long time. It is a victim of changing times and changing ways as was the region’s gold-rush boom more than a century ago.

Truck traffic that once flowed north along the Alaska Highway to supply the state’s Interior is almost all gone, the Alaska trucking business having shifted almost wholly to the George Parks Highway connecting Fairbanks to the now state-vital Port of Anchorage.

Meanwhile, the face of tourism has changed.

There was a time when motorists tackled the Alaska Highway as an adventure. They armored their vehicles with frontal screens to protect their windsheilds from flying rocks and battled a rough, gravel, snake of a road north for 1,200 miles to proudly claim an “I Drove the Alaska Highway” bumper sticker.

Today the road is paved for its entire length, and though much of the pavement north of Haines Junction beats up on a standard motor vehicle quite nicely, it is nowhere near primitive enough to challenge the adventure-seeking crowd.

On the other hand, it appears rough enough to deter plenty of others. You could bounce along the rough road for an hour, sometimes more, without encountering another vehicle this week.

A wandering grizzly bear, the only other life on the Alaska Highway/Craig Medred photo

That only began to change south of Haines Junction almost 200 miles south of the Canadian customs station here.

By Whitehorse, there was considerable traffic despite the pandemic, but it quickly thinned as you got away from the city and didn’t really increase that much until south of Watson Lake in the Yukon Territory.

The territorial campground there was near full at midweek, the nearby Haird Hotsprings overflowing. The campers were almost wholly Canadians, and the camping gear of choice was a motorhome.

Whitehorse would seem to have become the new endpoint for these campers.

Given that there is plenty of away-from-the-campsite adventure to be found there or even farther south, there is really no good reason to lash the dishes down, pad the breakables and push on farther north.

A Wednesday drive from Watson Lake to Fort Nelson, British Columbia was a little like a visit to Denali National Park and Preserve only with a nicely paved highway.

The scenery was spectacular and the wildlife plentiful.

Canadians in significant numbers appeared to be getting out to enjoy it all despite the pandemic.

The traffic on the roads was nothing like the madness of weekends on the Seward Highway running south from Alaska’s largest city to the Kenai Peninsula, but in the places where Canada’s incredibly expensive gas ($1.49 per liter, approximately $5.64 per gallon, and up) was available, there were usually vehicles waiting in line at the pump.

Gas availability in Canada is now largely limited to larger communities, the once common gas stations along the Alaska Highway long ago boarded up.

All that remains of many of them now are the rotting buildings. These businesses, too, were victims of changing times and changing ways.

They survived in a period when most automobiles could go only a couple hundred miles on a tank of gas, broke down with some regularity, and rode on tires prone to failure.

Gas, tire repairs and the towing of disabled vehicles formed the foundation for businesses that added restaurants and lodging as their profit centers.

When the foundation collopsed, however, most of those businesses died. The few left, like Ida’s Motel & Cafe here, are in small hub communities which now find themselves threatened not only by the changing times and changing ways but by the COVID-19 pandemic that has hammered tourism everywhere.

Even in Sweden, which controversially avoided lockdowns and masking, tourism has suffered, though not so much as elsewhere.