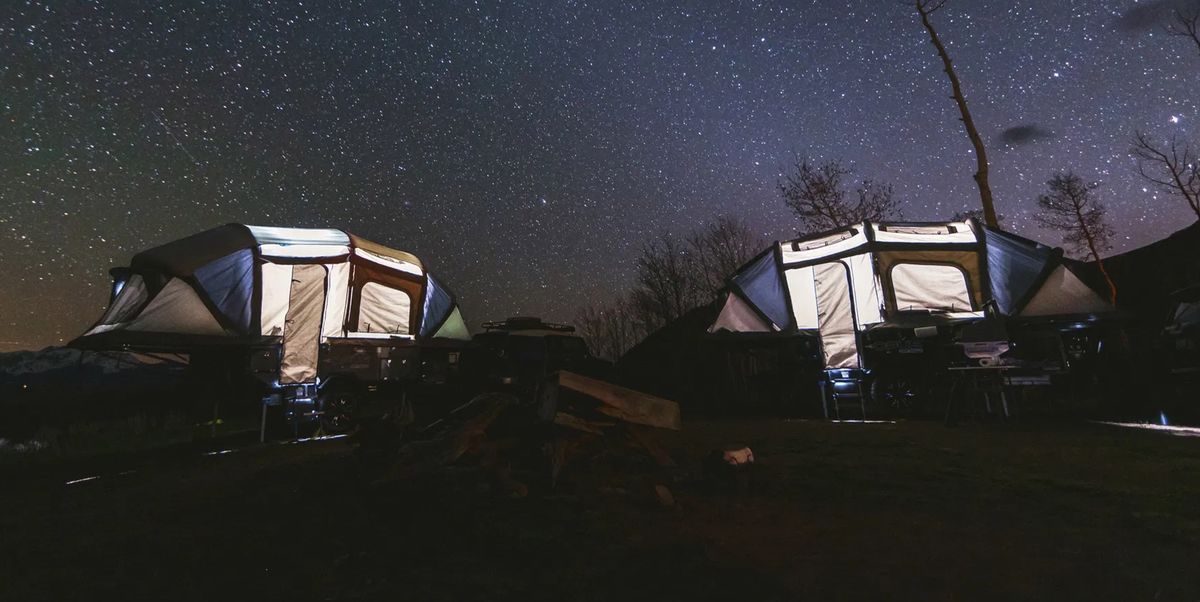 It may be hard to believe right now, but fall is just around the corner — which means, with the scorching ambient temperatures and the soupy humidity of summer begin to subside, we’re about to be in the ideal temperatures for camping season.

While there are a variety of ways to accommodate sleeping arrangements once the fire burns out, the smores supply wanes, and the time to turn in for the night approaches — rooftop tents, regular tents, camping trailers, camper vans, et cetera — in this case, we’re talking about pop-up tent trailer campers.

Which, of course, may beg the question:

What Exactly Is a Pop-Up Tent Trailer?

When it comes to camping, you can always go the bougie glamping route with a decked-out motorhome, a camper bus, or even a fancy-schmancy Airstream; yet these are big, cumbersome and pricey compared with the freedom and flexibility of other forms of camping. On the opposite side of the spectrum, one can go back to basics with a simple tent. Even with padding, though, trying to sleep on rough terrain however can be a major turnoff for many. Thankfully, there are plenty of alternative happy mediums in between — one of which is the pop-up tent trailer camper.

Think of it as a basic camping tent—or even, in some cases, a mobile compartmentalized gazebo—mounted permanently atop a small trailer chassis and equipped with onboard amenities. More than that, though, it’s all efficiently bundled together with sleeping arrangements that your back might appreciate — in a package almost any car can tow.

Advantages and Disadvantages of a Trailer Tent

Pop-up trailer tents often come equipped with items similar those of a much larger camper, but in pint-sized portions. For example, depending on the model, you might find a small cooking station, hardtop and dinette seating surfaces, extra storage spaces, a kitchenette sink, even air conditioning. The standard features list tends to include integrated electronics and plumbing, flexible connectivity options for water, propane, and power hook-ups, and more.

But at the same time, trailer tents are not as cumbersome or expensive as full-sized trailers, which need heavy-duty pickups or beefy SUVs and lots of space to haul. Most pop-up tent trailers weigh less than 3,000 pounds meaning they can be hitched up to most mid-to-full-size vehicles, like your average crossover SUV. Additionally, many pop-up trailer tents collapse into it their chassis for mobility purposes; yet when set up at one’s favorite camping site, they’re screened off to keep nature out.

There are a few disadvantages, though — particularly if you’re a stickler for square footage, or if you have large groups of people with you, as tent trailers are meant to be a compact and efficient way to camp. And you do need a vehicle with some sort of tow hitch to be able to drive off with one. Those without a factory hitch would have to consider aftermarket options.

And then there’s cost. While they are significantly cheaper than a larger camper or “destination” trailer, they still can cost a pretty penny—at least, when compared to your average tent that costs a few hundred bucks. Most brand-new pop-up campers range from as little as $7,000 to over $20,000 for the larger, more lavishly equipped models.

Like the trailer and motorhome market, there is a plethora of household names in the pop-up trailer tent market —as well as a few startups growing in popularity.

OPUS Camper, a subsidiary of trailering outfitter PurpleLine USA from Pittsburg, California, made a name for itself for offering a full lineup of luxury pop-up tent trailers geared towards overlanders. Feature rich and fitted with all-terrain tires and beefed-up suspension, OPUS campers are the Land Rovers of tent trailers.

Should you despise manual labor, all their models feature its in-house “OPUS Camper Inflation” technology, which means they can all be popped up and collapsed with a simple touch of a button in a matter of minutes. But be ready to fork over a nice chunk for this level of amenities; the base Opus Lite costs nearly as much as a brand-new compact car, starting at $19,900.

It utilizes a simple-yet-sleek skeleton design with an integrated a pop-up rooftop tent pod that provides sleeping quarters for up to four people. Should you not need to utilize said tent pod, the SylvanSport also doubles as an outdoor activity trailer, offering the flexibility to haul bicycles, kayaks and even dirt bikes without having to dismantle the tent pod.

Known for their “A-frame” style campers, Aliner is a reputable and well-respected brand for this unique type of pop-up. It may not be a pop-up tent trailer in the traditional sense, as it features solid walls rather than soft fabric walls, but they still come standard with integrated systems such as electronics and plumbing.

They also provide more secure and private quarters, in the event wild animals are a campsite issue. And because of its fixed design, there are fewer moving and expensive parts, so these A-frame pop-ups are on the more affordable side, with some offerings starting at under $10,000.

Not to be confused with the popular videogame, Starcraft and its parent company as of the 1990s Jayco are both household mainstream names known for RVs, campers, and pop-up tent trailers. Both offer pop-up tent trailer campers with similar designs and floor plans, offering a ton of flexibility, versatility, and onboard amenities.

Starcraft currently doesn’t have any new model pop-up trailers in its current lineup, and the most recent model from Jayco is the 2019 Jay Sport. But pre-owned examples from both manufacturers are abundant on the second-hand market.

This is just short list of some of the most popular manufacturers in the pop-up trailer tent market as there are plenty of other outfitters producing similar trailers. Other notable brands include Taxa with their Woolly line of trailers geared towards overlanders , Forest River RVs and Coachmen. So rest assured, if you’re in the market for a pop-up tent trailer, there’s no shortage of options.

This content is created and maintained by a third party, and imported onto this page to help users provide their email addresses. You may be able to find more information about this and similar content at piano.io