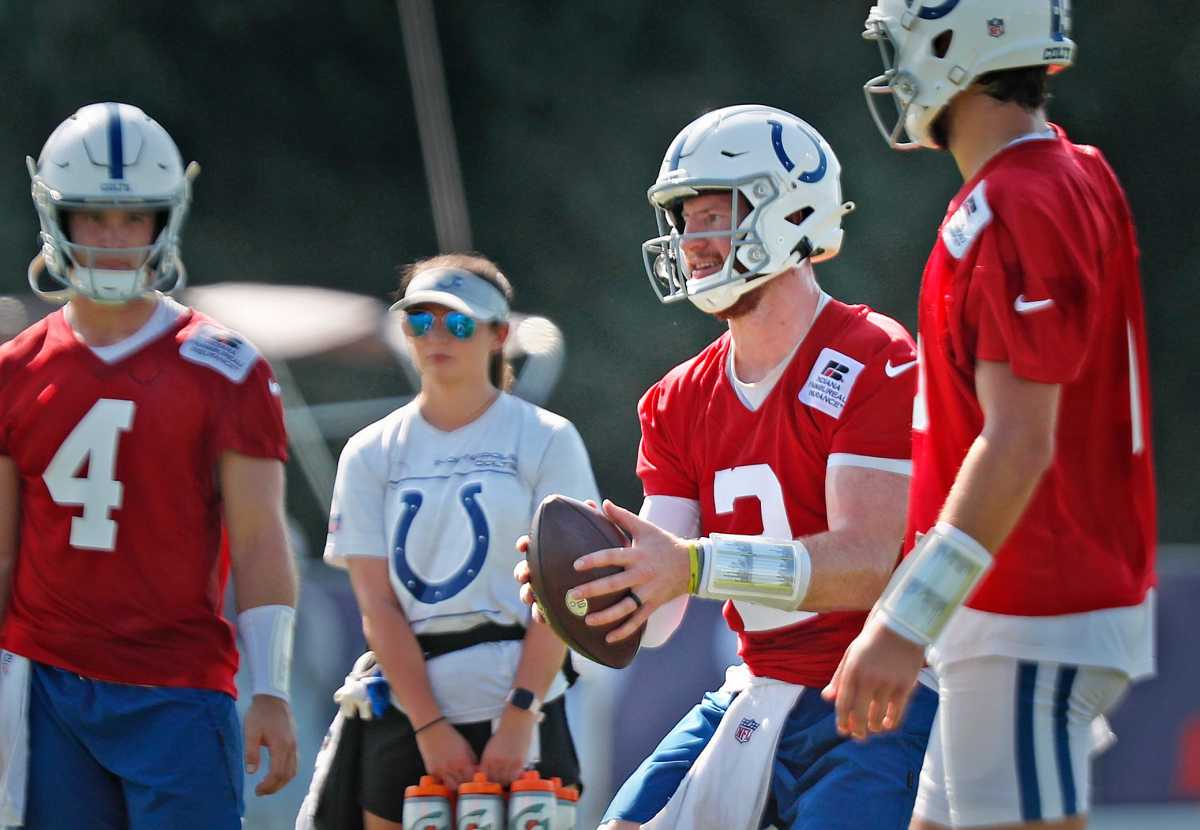 For the second consecutive day on Tuesday at Indianapolis Colts training camp, starting quarterback Carson Wentz was on the practice field.

After missing the last few weeks recovering from a foot procedure, Wentz returned on Monday, and his presence on Tuesday was a good indicator that his foot held up well to that first big test.

Tuesday was the Colts’ latest step in gearing up for their third and final preseason game on Friday as they travel to Detroit to take on the Lions, and then all attention turns toward their regular-season opener on Sept. 12 against the Seattle Seahawks.

I was not able to be in attendance on Tuesday, but I collected notes from some of my colleagues who were there. Make sure to catch the Twitter accounts of Kevin Bowen, George Bremer, Joel Erickson, Stephen Holder, and Zak Keefer for more.

— NFL teams needed to get to 80 players on the roster from 85 by Tuesday afternoon, so after waiving TE Andre Vollert, DT Joey Ivie, and LB Skai Moore on Monday, the Colts then waived K Eddy Pineiro and waived-injured TE Noah Togiai on Tuesday. If Togiai, who has missed most of camp with a knee injury, clears waivers, he’ll revert to the Colts’ Injured Reserve list.

— After returning to the field from his elbow injury with Wentz and LG Quenton Nelson on Monday, C Ryan Kelly was able to begin working in 11-on-11 drills Tuesday.

— As was evident in his first two days of camp before suffering his foot injury, Wentz is far and away the most effective QB under center for the Colts, particularly when it comes to scanning multiple reads quickly and delivering strikes. He continued to move the offense and put would-be points on the board Tuesday. Wentz continued taking every rep during 7-on-7s while not yet graduating to 11s and finished 19-of-31 passing (61.3%) with 4 touchdowns (WR T.Y. Hilton, WR Zach Pascal, WR Michael Pittman Jr., WR Ashton Dulin) and 2 interceptions (CB Isiah Rodgers and S Sean Davis).

— Wentz’s touchdown to Hilton was from 65 yards out and was the result of beautiful work from both Wentz and Hilton. Hilton put a nice move on CB Xavier Rhodes and then gained quite a bit of separation, flying down the left side for the score. Wentz then had three consecutive end-zone strikes near the end of practice in red-zone work to Pascal, Pittman, and Dulin.

— On one of Wentz’s two interceptions, Rodgers made a great play on the ball by jumping the out route intended for WR Dezmon Patmon as Wentz locked his eyes onto the receiver. It would have been an easy pick-six for Rodgers in a game. Meanwhile, Davis came up with his third interception in two days by grabbing the pick off of a tipped pass.

— Second-year QB Jacob Eason continued his improved play in practice by orchestrating a two-minute drive at the end of the day that was finished off with a 54-yard field goal by K Rodrigo Blankenship. Eason was 11-14 passing (78.6%) in 11-on-11s while QB Sam Ehlinger was 6-of-9 (66.7%).

— Rookie S Shawn Davis was seen getting some reps with the first-team defense in place of Khari Willis. It is not an indication of any depth chart moves, rather the Colts just wanting to see what Davis looked like with the 1s.

— Let’s finish the day’s note off with this highly impressive grab by Pittman against CB Kenny Moore II:

What did you think of Day 19 of #ColtsCamp? Drop your thoughts below in the comment section!

Miss Anything During Camp? We’ve Got You Covered!