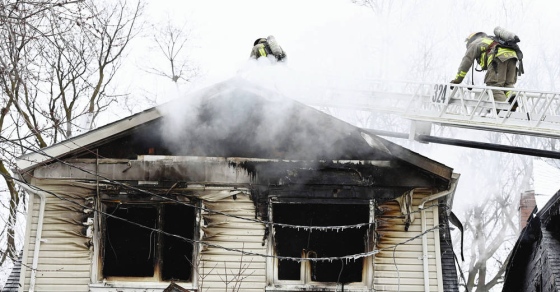 If a substance used to increase public safety is found to be highly poisonous, a careful weighing of risks against benefits is in order.

If the same substance is found to worsen, not improve, safety, we should all ask why it continues to be used.

Public health and safety officials, biologists and even lawyers in Canada, the U.S. and Europe have been asking that question about a group of chemicals called flame retardants for a number of years. The ­federal government recently announced additional steps to address the issue.

The “comprehensive action plan to ­protect firefighters from harmful ­chemicals released during household fires” ­outlines steps to ban harmful chemical flame ­retardants, support development and use of safe flame retardants, conduct more research and monitoring to assess levels of exposure, and so on. The initiative adds to the government’s existing Chemicals Management Plan, under which 12 chemical flame retardants have already been restricted or are being phased out.

Flame retardants are found in most home and office upholstered products. Beginning in the 1970s, the chemicals have been used in mattresses, bedding, fabrics, camping gear, vehicles, construction materials, and foam and rubber products. They’re common in children’s goods such as car seats, strollers, toys, pajamas and changing table pads. You can even find them in the plastic outer ­casings and internal components of electronics and appliances.

The chemicals’ purpose is to keep items from catching fire and to limit the spread of fire.

Numerous studies have shown that ­flame-retardant chemicals applied to ­household items during manufacturing are not particularly effective at ­preventing house fires or increasing fire safety. For example, a 2012 test by the U.S. Consumer Product Safety Commission found that ­“fire-retardant foams did not offer a ­practically significantly greater level of open flame safety than did the untreated foams.” The chemicals also have been found to not significantly improve protection against smouldering sources of ignition, such as cigarettes and radiant heaters.

Safer alternatives, such as cotton fillings and coverings made of different ­materials and fabrics, have been demonstrated to be more effective at reducing how easily a product can ignite.

If that weren’t enough to make a person question their widespread use, chemical flame retardants are among the highly toxic “forever chemicals” that persist in the ­environment and the body. As ­documented in a report published last year by the ­University of Victoria’s Environmental Law Centre, a significant body of research shows the chemicals contribute to cancers, and cause hormone, metabolic, reproductive and immune disorders, and even lower IQ in children whose mothers were exposed to the chemicals during pregnancy.

We come into direct contact with the chemicals in the products themselves ­— ­particularly bedding, furniture and similar items. When products that contain flame retardants age and start breaking down, the chemicals enter the air and dust around us. Pregnant women and their unborn children are at most risk, as are infants, toddlers, pets and any other family member who spends a lot of time at floor level, where dust collects.

When treated fabric is washed, the ­chemicals enter the sewage system. A 2018 study of eight wastewater treatment plants across Canada showed that wastewater ­treatment can remove varying amounts of the chemicals from the water stream — depending on the specific chemical, the time of year and other variables. In ­addition, the chemicals leach from, for example, discarded furniture along the roadside — a frequent phenomenon in this region — into creeks, rivers, lakes and the ocean via stormwater.

But the real irony about flame retardants is they increase the danger of garden-variety house fires.

“Fires today burn hotter and faster than ever before, aided by the chemical soup of toxins contained within our homes and ­businesses,” says B.C. ­Professional Fire Fighters’ Association president Gord ­Ditchburn. “Chemical flame retardants designed to keep us safe can actually ­contribute negatively once the product ­combusts.”

When flame retardant-treated ­materials burn, a fire’s smoke becomes blacker, thicker and up to 10 times more toxic than the smoke from untreated products.

As a result, firefighters typically have higher levels of the chemicals in their bodies than other people do. Their rates of cancer and cardiovascular and endocrine disease are often correspondingly higher, too.

Using chemical flame retardants in ­furniture and most household items provides little benefit to firefighters or to families trying to escape a burning home.

As a society, we’re shouldering all of the risk for very little gain. And the firefighters among us are taking the brunt of it.