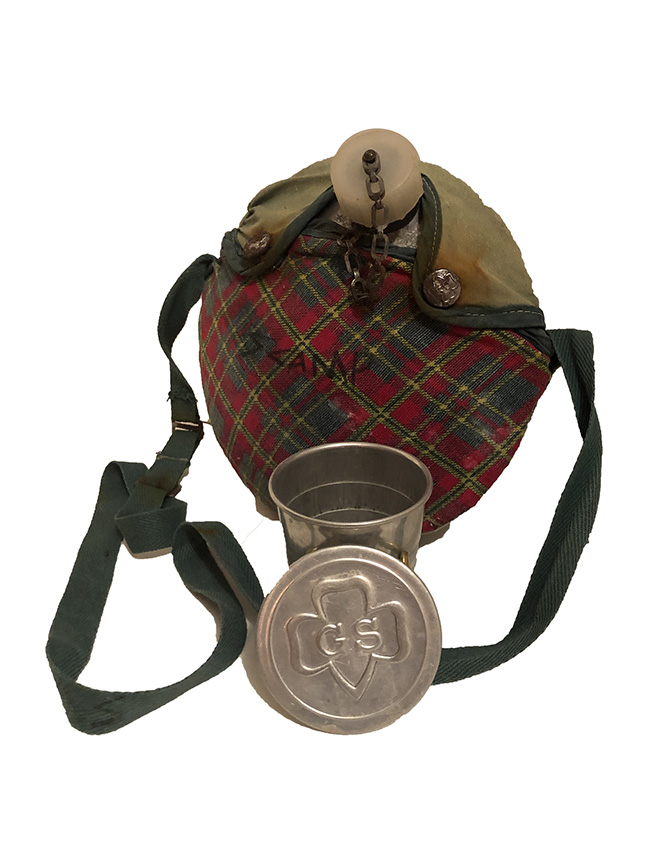 Whether you’re tramping through the shifting sand dunes or along a dusty trail, a scout should always have a handy source of hydration.

The Girl Scout canteen was first offered in 1934, with a khaki fabric cover and strap. With the exception of the Girl Scout logo printed in the cover’s center, it looked no different than a Boy Scout or Army issued canteen. The 5-cup capacity was priced at $2.25 and the 3-cup at $1.25.

The collapsible cup, with the Girl Scout logo stamped on the lid, was first offered in 1931. Made of concentric rings, the cup is formed by pulling up until the cup is watertight, once empty, the cup is folded back down to pocket-sized form. The snap on lid keeps the cup clean and can hold pills or other small items safely. Nickel-plated, the price was 20 cents.

During World War II, when metal was scarce, the official scout cup was fabricated of clear plastic and cost 50 cents. The all aluminum cup (catalog #15-108) was introduced in 1949 and remained in production at the cost of 25 cents until a green plastic version was introduced in 1976.

Following the popularity of plaid accessories during the 1950’s, the Girl Scouts offered a full array of camping gear in 1954 featuring a red and green plaid pattern. The sleeping bag, mess kit, and canteen all coordinated for a stylish camping adventure. The 1 quart canteen (catalog # 15-100) sold for $2.75 and was made by Mirro Aluminum.

While current scouting gear has gone eco-friendly, today’s scouts will never have the joy of swinging a full canteen around their neck or smacking a fellow scout’s collapsible cup so all the water pours onto their shoes.