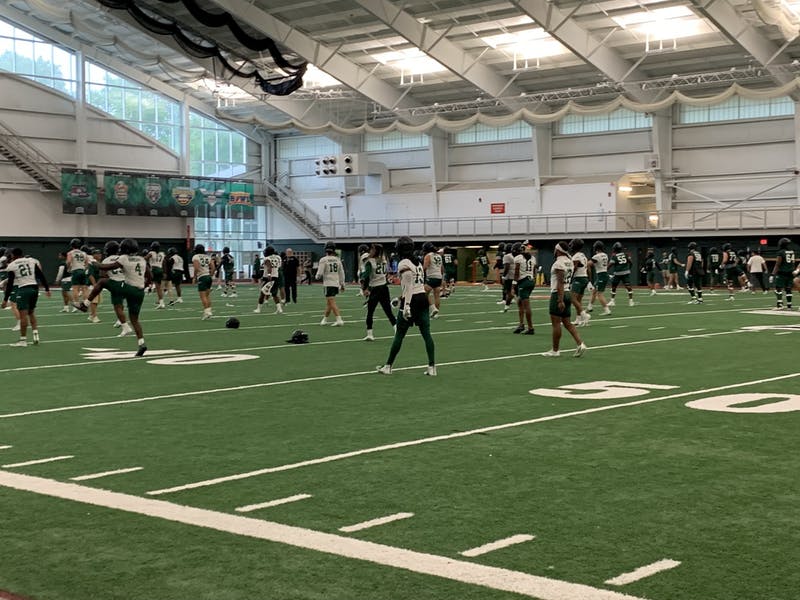 Ohio held its 11th practice of fall camp Wednesday in Walter Fieldhouse due to heavy rain in Athens.

Although the Bobcats practiced in a different workspace than Peden Stadium, their work was nonetheless par for the course. Practice went smoothly and position drills took up much of the Bobcats’ time, while team drills were delegated to the closing periods.

Here are The Post’s observations from Ohio’s 11th practice of fall camp:

Many young and lesser-known wide receivers continue to make names for themselves. Nigel Drummond II — a common target for quarterbacks Kurtis Rourke and Armani Rogers throughout camp — was among those receivers. He received positive remarks from wide receivers coach Dwayne Dixon during position work and caught a few passes during team drills.

Drummond is pleased with his performance in camp thus far. He’s working to be the next man up under more experienced receivers.

“There’s always room for improvement,” Drummond said. “But honestly, this camp is one of my best so far in my three years being here. I’m going to keep it going.”

The redshirt sophomore and other young receivers have been given much-needed advice from Cam Odom and other veterans in their unit.

“They’ve been helping me out since day one,” Drummond said. “When I don’t know a play or don’t know my assignment, and I always just ask them a question and they’re going to help me out. We’re brothers, so they’re just looking out for me.”

After not playing in his first two seasons, Drummond has shown potential to make plays no matter who’s throwing to him. Other young receivers — including Miles Cross and Keegan Wilburn — continue to improve as Dixon demands perfection from every rep.

While Ohio didn’t practice field goal drills since there are no goal posts inside Walter Fieldhouse, it still held special teams practice in a limited capacity Wednesday.

The Bobcats spent much of this time practicing kickoffs. While a ball launcher “kicked” to return specialists including Wilburn, De’Montre Tuggle and O’Shaan Allison, most of the Bobcats worked on kickoff maneuvers and defense. The quarterbacks and select members of the offense completed passing drills in the meantime.

Less weight on the shoulders

After two straight days of wearing full pads, the Bobcats spent Wednesday’s practice in only jerseys, helmets and shorts. No pads meant lighter contact during drills and a respite from a high-gear second week..

If that wasn’t enough for Ohio, it was also under the roof of Walter Fieldhouse as opposed to practicing in the heat at Peden Stadium.

The weather in week two of fall camp has been much more tolerable compared to the first week. The Bobcats have practiced in overcast skies, light rain and mild temperatures in the 70s. In Wednesday’s case, they also practiced with a roof over their heads.

Ohio isn’t lightening its workload or letting itself get too used to the temperate weather, but it has earned a little slack after over a week of rigorous work.