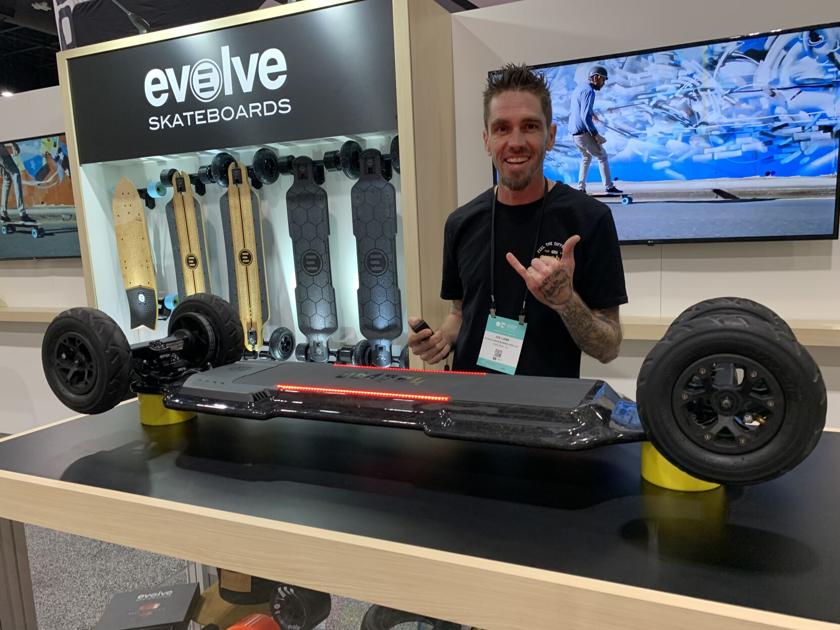 Campers will soon be able to fry up that morning bacon without any campfires or propane. A new skateboard zooms more than 40 mph and brings the bling with LED lights. Down jackets face competition with new, thin polyester-based fabric with trapped air – similar to bubble wrap.

These are but a handful of new technology and gee-whizzardry gear the Outdoor Retailer Summer Show always brings with the hundreds of retailers to Denver. This week’s show at the Colorado Convention Center downtown did not disappoint.

First up, the just-launched Neverflame.

It’s a battery-powered, flameless system that can boil water for your morning camp joe, as well as frying eggs up on a mini-skillet. Oh, and it can power your cell phones and GPS devices.

“We’ve improved the tech on the battery, so there’s 300 watts of powerful cooking power there,” said Alanna Rose, Neverflame spokeswoman. “You can recharge it with your vehicle or solar. We think it’s going to be popular with emergency response, hunters, fisherman and campers of course.”

Of course, there’s an app for that to control and hold temperatures. Rose didn’t say if it works where there’s no cellular or WiFi service.

“The result is the NeverFlame cooking system which is powerful enough to boil water and cook food, portable enough to fit in a backpack, and purposeful because it eliminates waste while never having to create a dangerous flame while cooking again,” Ruben says on the company’s website.

With some supply chain issues, product delivery is still a couple months out. But patents are, of course, pending.

“We came to Denver to show how it works, sign up some retailers and get some input,” Rose said.

But if you really can’t live without that campfire, and are in a place that allows it, a Phoenix-based company called Fireside Outdoor sells a “pop-up fire pit” – an aluminum and steel-mesh box that lifts the fire off the ground.

“This was originally designed for the river community,” said Nathan Struck, marketing manager.

The pit comes in two sizes, 24×24 inches and the “trail blazer” at 12×12. Lifting the fire allows oxygen to feed the fire from below, making it “virtually smoke-free,” he said.

Staying warm without fire is what’s next.

The Cerro Jacket from Santero Apparel brings the warmth without the feathers.

Santero is a new “environmentally conscious outdoor brand” based in Mexico, but distributing to the United States out of California.

It works alone, or as a mid layer, with the air-bubble wrap-type polyester-based fabric. The company touts its clothing “that can be used anywhere from an urban environment to the harshest environments on the Earth.”

“This is a brand-new fabric,” Santero said. “The power air bubbles and fabric are great insulators, and it’s ‘creature free’ (no goose down feathers). … It works just as well. We try to raise awareness with our apparel.”

Finally, motorized skateboards are certainly not new – but Evolve Skateboard’s new Haden series in its GTR line of carbon fiber electric skateboards certainly qualifies as a Cadillac of boards.

Evolve debuted it at the Summer Show, with plenty of room for demonstrations. Customer descriptions of “amazing and terrifying” seem apt.

This puppy can move more than 40 mph (most top out at 26 mph), has a more powerful battery for longer rides and big tires for off-road, said Travis Maton, global retail manager.

“You can go from grass to hard path to dirt to concrete,” Maton said.

The remote-controlled board comes with a hefty price-tag: $2,899.

“Colorado really has a good range of retailers who would sell this,” Maton said.