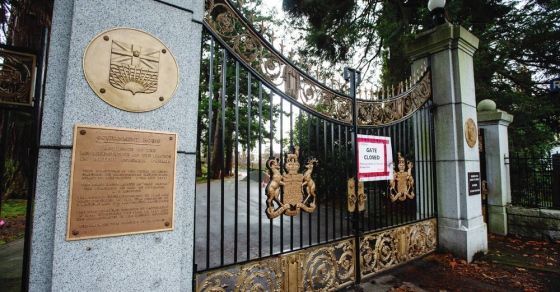 I first strolled around the lawns and ­gardens at Government House, free of charge to all throughout the day until sunset — hmmm, sunset. My friend and her mother experienced an incident there a few weeks ago — the gates closed at sunset and my friend and her mother were locked inside on the grounds. They spent an hour looking for gaps in the fence, knocking on every ­window and door of the big stone mansion, and ­calling out to anyone on the grounds — no gardener, no maintenance, no Janet Austin, and seemingly no security.

The mum was afraid to scale the fence due to the possibility of impalement on those freshly black enamelled painted spikes. Too embarrassed to phone 911, the boyfriend was called, who soon appeared in his little car which he drove up on the sidewalk with ropes and other supplies.

They had two creative options — he could throw their camping gear and food over the fence, or use a ladder and pillows (for a soft landing) should they choose to break from the enclosure. They chose the ladder and pillows. My friend said her mother was ­terrified atop the stone pillar, but “a weird guy on a skateboard stopped to help her jump into his arms.” The story is totally true, and mind-boggling, really — I hope L.G. Janet reads this (apparently there was a light on upstairs at the back).

Obviously my pal and her mum didn’t have time to visit the museum’s gift shop. Visiting the gift shop afterward at many of these sites is like a lovely conclusion before the exit (a normal exit). A look around at the local crafts and postcards serves as a sort of a gentle transition back into reality and I always purchase the book (there’s usually a book about the site — the people, its nature, gardens, architecture or its cultural and social history).

A Curious Life, The Biography of Princess Peggy Abkhazi by local author ­Katherine Gordon (2002, Sononis Press) tells the ­thoroughly researched story of how the little orphan Marjorie (Peggy) Pemberton-Carter from “the industrial slums of Lancaster, England” came to marry Prince Nicholas Abkhazi from Georgia, and together created a beautiful home here in Victoria, described as a “bungalow style,” but the real gem is their special garden full of selected plants “from the finest nurseries of the day.”

You can stroll through her cooling ­rhododendron woodland amongst ferns and forest flowers, amble up the little neatly raked gravel pathways between the ­boulders and rock garden bordered by colourful ­foliage and then sit peacefully at the little summer house where, if you are lucky, a friendly volunteer will tell you much about Peggy’s extraordinary life.

You can end your visit with a cup of tea and “dainties,” then peruse the little gift shop that smells of fresh paint and wood.

A short distance away sits the lovingly restored Ross Bay Villa. The book Our Happy Home, Ross Bay Villa Past Present Future (2019, Ross Bay Villa Society) tells the story of how the dear old home and its gardens, originally the residence to the Roscoe family in 1860, was saved and ­renovated. But in my view, the book is a ­tribute to the enormous love and labour that the volunteers committed to this historic house.

Full of glossy illustrations and ­readable text, this book is a celebration to the ­preservation of history. The “two chimneys that divide, then meet again” is a feature specific to the architecture of Scottish-born John Wright in the mid-1800s and his name appears frequently in Victoria’s early days. He designed the first Wesleyan Church downtown and the Fisgard Lighthouse as well as residences.

There’s a photograph of the derelict house in 1997 before it was “rescued” from years of neglect, the property littered with ­abandoned vehicles amongst the ­entwining brambles and enveloping vines. “The ­restoration team had to locate the owners and buy the carcasses in order to scrap them.”

The devoted volunteers of the society say “the goal for Ross Bay Villa was to present it in its original configuration with no later additions,” which sets it apart from many other prominent heritage buildings.

Speaking of volunteers, take a little visit to Fort Rodd Hill and the Fisgard Lighthouse.

On your stroll up the hill to the Upper Battery, you will meet two lovely gals ready to tell you all about military medical history. One is dressed as a First World War nurse and holds an amber glass jar of chloroform. Took me aback for a moment, as the ­likeness in her blue and white garments and her sweet demeanour was uncanny (in real life, she’s a marine biologist).

Before the rains and blustery sea storms are upon us, take a visit to our various sites from the past — stroll, purchase the book, picnic, learn, but just make sure you leave before the gates are locked!