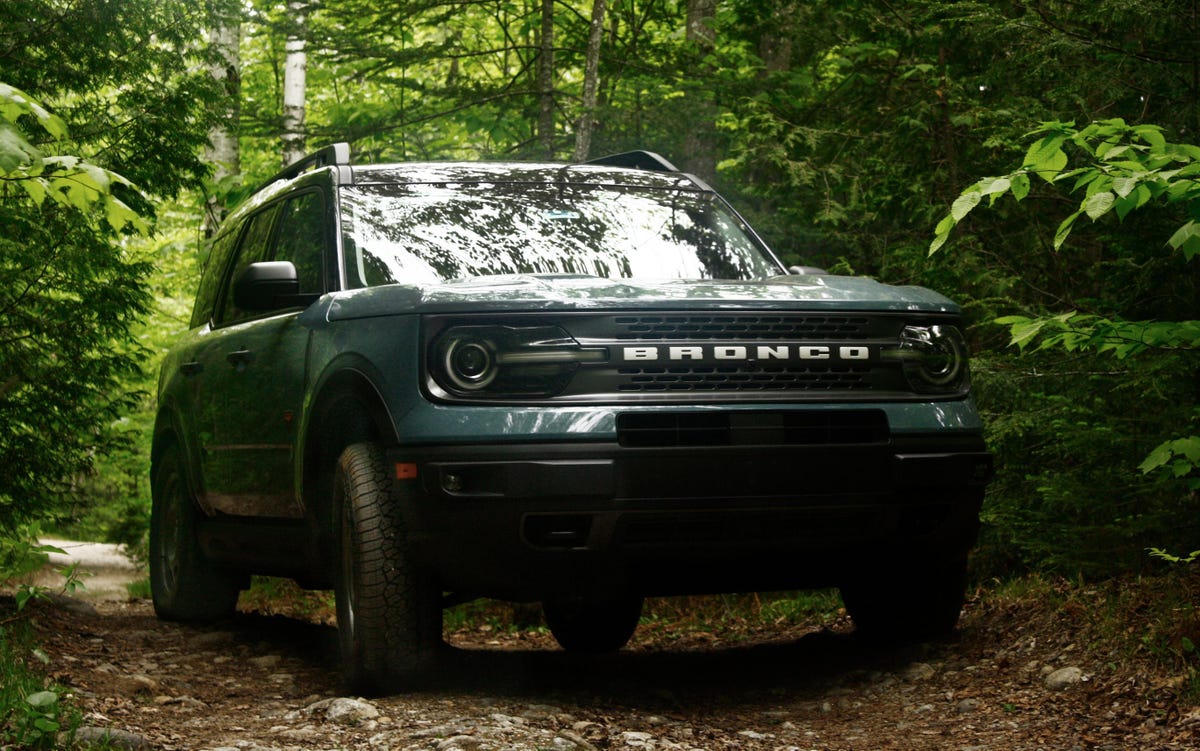 In a bit of a twist, when Ford revived the legendary Bronco SUV, it also announced a smaller Bronco Sport based on the Ford Escape. Inevitably, it became known as the “baby Bronco” and was derided before it even had a chance to roll off of the assembly line. Based purely on the fact that it’s a crossover, the assumption was it would be useless off-road and never live up to the bucking horse emblem it adopted. In yet another twist no one saw coming, the resulting 2021 Ford Bronco Sport is an incredibly capable weekend adventure warrior.

If you’re looking for horsepower, you shouldn’t be cross-shopping crossovers, plain and simple. With that said, the Bronco Sport comes with two engine options: ​​A 181-hp, turbocharged 1.5-liter three-cylinder base engine and a 245-hp turbocharged 2.0-liter four-cylinder which powers the Badlands trim level, the model I tested. Both pair with an eight-speed automatic transmission.

In the city and on the trail, the 2.0-liter engine was up to the task and provided the low-end punch when it was needed. On the highways, it was a little less adept. It loses some grunt at higher speeds, although the gearing of eight-speed transmission made the longer stints more tolerable. Small engines and boxy cars usually make highway driving unnerving, but the Bronco Sport coped better than Jeep Wrangler.

The ultimate success of Bronco Sport hinged on so many factors, the all-new compact SUV seemed doomed from the start. Styling, which is always a critical factor, seemed emphasized in this case. I can’t imagine Ford was too worried about pleasing the small, furiously opinionated cohort known as enthusiasts, but they did have to achieve something special.

The original Bronco — its name, its iconic design — has become increasingly desirable, finding itself on wishlists of more than just vintage car nerds and the new “big” Bronco leans on that heavily. However, for a lot of consumers out there, a full-size SUV isn’t practical or feasible. This is why the smaller Bronco Sport needed to be more than just another awkwardly reshaped version of its bigger brother.

Ford borrowed cues from the full-sized Bronco to fill out the Sport and cement the association, but all in all, the Bronco Sport does just fine on its own. There are enough hard edges and flat surfaces recalling SUVs of yesteryear, which blend nicely with the modern proportions of a crossover in 2021. Ford could have lazily reshaped the Escape, swapping headlights, taillights and with simple badge engineering. Luckily, the Blue Oval went even deeper than just the sheet metal.

An Interior For The Outdoors

One could argue the Bronco’s return and the introduction of the Bronco Sport couldn’t have come at a better time. Before 2020, the multi-billion dollar outdoor and adventure industry was projected to be a trillion-dollar industry sometime between within a few years. Now with the worldwide shift in interests, expediting that isn’t out of the question. To win over that massive crowd, the Ford Bronco Sport needed to play the part.

Much like the new Land Rover Defender, the Bronco Sport feels very much like something you’d find in your online shopping cart, next to a tent, sleeping bag and some campfire cookware. The difference being, the Defender feels infinitely more upscale, like it came from the higher end of Backcountry.com, whereas the Bronco Sport could be found in the camping aisle at Walmart.

That’s not the knock against you think it is. As with any growing recreational industry, product prices can unjustifiably decouple from the products’ actual capability. There are people who will absolutely buy that custom-made camping knife with a hand-carved handle and a Damascus steel blade. Just know that Walmart will sell you a perfectly fine Gerber Knife for a fraction of the price and you’ll get through your weekend in the woods all the same.

In any car that claims it can and will go off-road, the interior is the clearest indicator the manufacturer actually wants you to. The Bronco Sport Badlands interior is simple, straightforward and clad in rubber. Nothing looks like it’s going to break just because the road got too bumpy and, coincidently, the rubber looks like it was sourced from the same place Gerber Knives gets theirs. If you’re driving through mud and camping in the dirt, tracking it into the car is inevitable and it shouldn’t be something you have to worry about.

G.O.A.T. or Go Over Any type of Terrain modes is another link to the big Bronco but also helps the Sport stand out in its segment. While the entire Bronco Sport lineup comes with Sand, Slippery, Sport, Eco and Normal drive settings, the Badlands gets an additional two Mud/Ruts and Rock Crawl.

Each adjusts the engine mapping and traction control to optimize grip and stability accordingly, but with the Badlands, you also get an upgraded twin-clutch rear differential, an extra inch of suspension and 17-inch wheels wrapped in 28.5-inch all-terrain tires. Not many other crossovers can boast that sort of off-road reinforcement.

Is The Bronco Sport Any Good At Car Camping?

The Bronco Sport was designed almost exclusively for the outdoors and adventure lifestyle crowd. More specifically, the weekend warrior types, not the die-hard through-hikers and overlanding enthusiasts. As a result, the Bronco Sport adequately fits enough gear for two, a cooler, tent, all the essentials and not much else.

Over a long weekend, my girlfriend and I packed up the Bronco in Brooklyn, pointed north and drove up to the Adirondacks for a few days of hiking. It was what I imagine the exact scenario Ford planned when they set about sketching the Bronco Sport. Leaving the city, hitting the highway, then turning down a trail to keep the adventure going.

Our regular camping spot is down a trail, right off the road, but requires some light rock crawling within the first couple feet, which thankfully deters most other cars. The G.O.A.T. modes came in handy almost immediately.

Having a smaller footprint (combined with the off-road extras) means the Bronco Sport Badlands fit easily down the tight trail lined with trees ready to scratch the Area 51 gray paint job. Once we got to the campsite, we unpacked and set up shop.

Unfortunately, due to the Sport’s smaller stature, if the weather turned for the worse, even with it completely empty and the seats folded down, there was no way the two of us would be able to take shelter and expect a comfortable night’s sleep. Cargo volume is 29 cubic feet. Thankfully, we never saw rain.

At its most basic distillation, the crossover is an SUV built on a car platform and attempts to merge the best of both worlds. The result is the automotive poster child of the phrase “Jack of all trades, master of none.” Manufacturers were building what amounted to large and awkwardly proportioned cars that didn’t do anything all that well.

What Ford is doing with the Bronco Sport is catering towards the adventure community is helping the crossover finally find its place in the world. Big SUVs, off-roaders and overlanding rigs have their benefits, but when the road ends and the trail gets rugged, sometimes what you need is a smaller vehicle still capable of tackling dirt and mud. There might be a sacrifice in cargo space, but a shorter wheelbase, less overhang and less weight make for a much more approachable and versatile machine.

For years crossovers have, for whatever reason, tried to be smaller yet sportier SUVs. Finally manufacturers are starting to emphasize the right traits of the architecture and put them to use where SUVs are generally better: off-road. The Bronco Sport and all the other off-road-ready CUVs prove this is what the platform should have been used for all along. Pair that with the booming outdoor adventure industry and we might just be in the Golden Age of the Crossover.