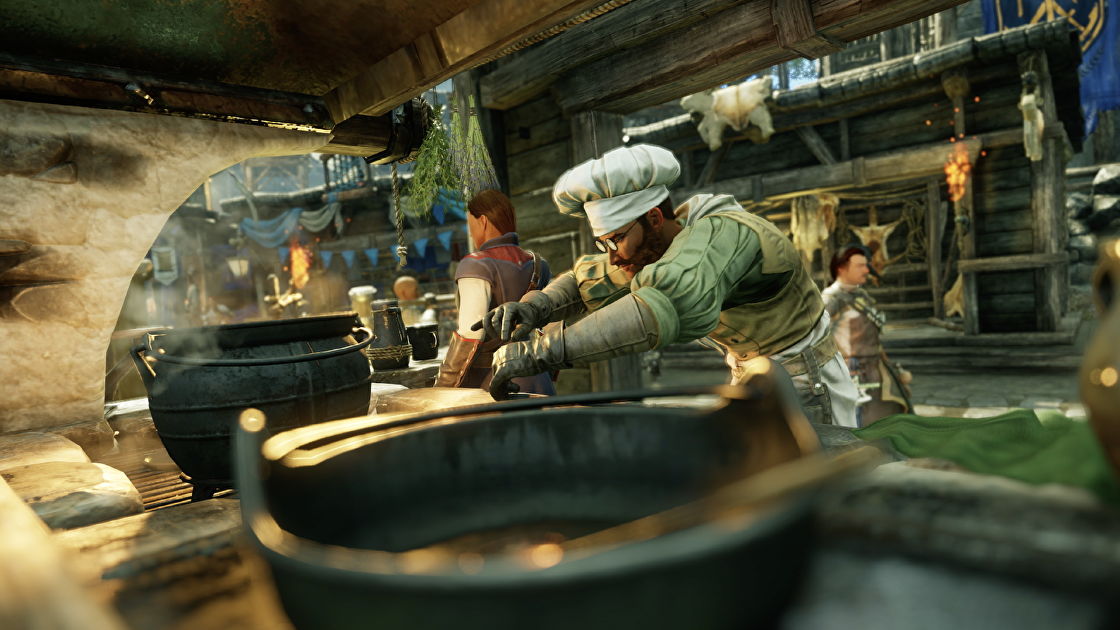 Right now I’m playing a lot of MMO Final Fantasy XIV and I’ve not crafted a single thing, not one itty bitty ring or tattered leather belt. And I don’t plan on it either, until at least I’ve reached the retirement endgame where people ditch fighting and become carpenters who sit in city centres and saw wood for hours on end.

My point being – it never feels essential, you know? Which is why I liked New World’s take on crafting, which grips you firmly by the shoulders and shakes the complacency out of you. Here, there’s no getting away with it. Either you craft, or you don’t progress at all.

Now this might make New World sound exhausting for those of you who, like me, didn’t sign up for a semi-relaxing MMO only to be dragged across the land by a crafting system like a digital Bear Grylls yelling “Survive, adapt, overcome!” whenever he sees a copper deposit. But I reckon it gets the balance right. Grylls is, after all, less of an obnoxious drill sergeant and more of a mate who’s fun to be around (even if all he says is “Survive, adapt, overcome!”).

Now, I can’t speak for the vast majority of MMORPGs out there, but World Of Warcraft and Final Fantasy XIV feature so many different secondary jobs that they basically make up an entirely separate universe: smithing, botany, cooking, fishing, doing the dishes, wading through Moonpig cards to find ones that aren’t too cringe for your mate’s birthday – you get the picture. And they involve talking to specific trainers dotted all over the gaff. Oh, you want to learn cooking? Then speak to Dotty, who’s holed up on the peak of Mt. Everest. Oh, you need to learn how to fish? Well, you’ll need to sign this document committing your soul to a demon, but before that, do you know what this is? A fishing rod! Yes! Now this is a bit of bait, you put it on like this…

There’s definitely a separation between crafting and the usual questing in the MMOs I’ve played. Crafting skills can feel like exhausting undertakings, even if eventually they become a great deal of fun. But in New World, crafting is ingrained in just about everything. You need to craft your own flint knife within the first ten minutes, then skin a boar and roast its meat. You’re given fishing rods by your average quest-person. Not only is it essential to progress, meaning you have no choice but to engage with it, but there’s hardly any barrier to entry here.

In New World, crafting is just a natural means of survival. Axes and pickaxes and knives are basic tools handed out to everyone, not just the select few who feel like becoming a lumberjack or miner. In the early game, at least, the actual act of gathering materials is simple and intuitive, with a quick press of E when near bushes or trees or whatever to strip them of their goodness.

The sounds you make when clinking pickaxes into rock or chopping wood are bliss for your earholes as well. Even little things, like the way you don’t watch a circle fill when doing so, but rather see it deplete with every weighty thunk of your axe, are refreshing. It’s so satisfying watching it tick down to nothing and seeing those precious logs stash themselves in your inventory.

As I mentioned in my New World preview, I get the sense that crafting ties heavily into the PVP side of things. Town smelters and tanning racks are shared and levelled by all players in that territory. Plus, leaders can tax them too. I’m yet to fully experience the impact of these things, but I like that there’s clearly a very communal element to crafting that impacts everyone in a town, as opposed to other MMOs where you might trade goods only to very specific buyers.

I’m actually amazed by how much I like the crafting in New World. I thought it might be the combat that hooked me, or the questing, but no: the one thing that I often steer away from in most other MMOs is what gives this one some serious potential to stick. Anyway, I best get back to that ore vein. Come on Grylls, we haven’t got all day.