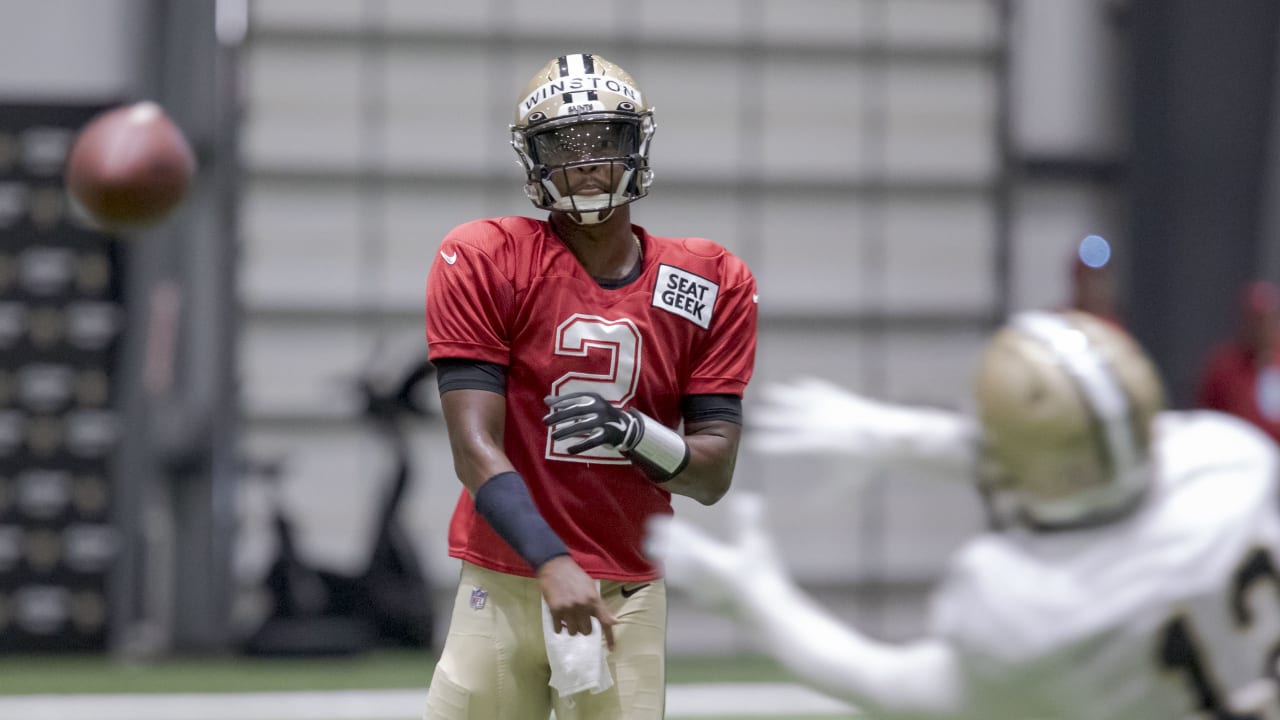 The first portion of Thursday’s training camp practice was held in the New Orleans Saints’ indoor facility, so you’ll just have to trust us on this:

﻿Jameis Winston﻿ and ﻿Easop Winston Jr.﻿ connected on a 60-plus yard throw that was equally impressive on both ends. Jameis, flushed a bit to his right, rocket launched a pass and Easop, running a post pattern, tracked it full speed before launching at the end, laying out and somehow cradling the ball against his body before landing at the 2-yard line and skidding into the end zone.

“I saw Jameis step up and I knew I had to kick into second gear,” Easop said. “I just put my head down and I thought it was out of reach at first. I just stretched my hands out and thankfully it fell in there and I just had to secure it on impact coming down.”

It ascended to the top of the “best catch in camp” chart, but Easop put it in its proper perspective.

“It feels good,” he said. “From day to day, I’m just trying to get better, just trying to take a step forward every day. Some days might not be the best but you’ve just got to have that next play mentality. So every play, whether it’s good or bad, I’m trying to do better than the last play.”

Maybe, having his “cousin” at quarterback helped. Jameis playfully called Easop his cousin during one media availability.

“That’s a joke,” Easop said. “When I first met him, Winston-Winston, he was calling me ‘cousin.’ I’m like, ‘Let’s run with it then.’ I don’t know for sure if we’re actual blood, but I’m gonna run with it.”

POSITION SHIFT: The concept of playing safety wasn’t foreign to ﻿Bryce Thompson﻿. While primarily a cornerback, he played the position in a couple of packages at Tennessee.

But the undrafted rookie never had played it this much until his first NFL training camp.

“I love new challenges, so I’m embracing it. It helps me learn different concepts with football. I can learn the field from a whole different perspective.”

It’s a perspective that Thompson likes.

“It’s a whole lot easier,” he said. “You can see everything instead of being on that one island. But I don’t mind being on that island.”

He said the time he has spent at corner has helped at safety, especially mentally.

“Because being on that island, it’s all about confidence,” Thompson said. “It helps me with confidence. You know nine times out of 10, you’re on that island, that ball is probably going to come to you, especially in a pass situation. It just helps me with the confidence and understanding leverages, playing the right spot, knowing I’ve got to help my corner if I’m in the middle of the field.”

The Saints have had some experience with the move; P.J. Williams was a cornerback his first three seasons until, for the final two games of his fourth year, he played safety – for the first time since high school – due to injuries in the secondary. He settled in to the position last season, while retaining the ability to play corner when needed.

SATURDAY NIGHT LIGHTS: Among the Saints who are looking forward to Saturday’s preseason opener against Baltimore at M&T Bank Stadium, put Easop Winston and Thompson, an undrafted rookie in ’20 and ’21, respectively, at the top of the list.

“Last year with Covid and everything, no preseason, so I was kind of bummed about that,” Winston said. “But knowing Saturday, I’ll be able to suit up, it’s a dream come true and I know it’s going to hit me even harder when I get to Baltimore.”

BITS AND PIECES: Officials were present for the second consecutive day. The Saints pretty much live tackling on a short-yardage drill, highlighted by a Kaden Elliss stick against running back Latavius Murray.. … Among the players not practicing Thursday were running back Alvin Kamara, safeties Malcolm Jenkins and Marcus Williams, defensive end Payton Turner and linebacker Pete Werner.