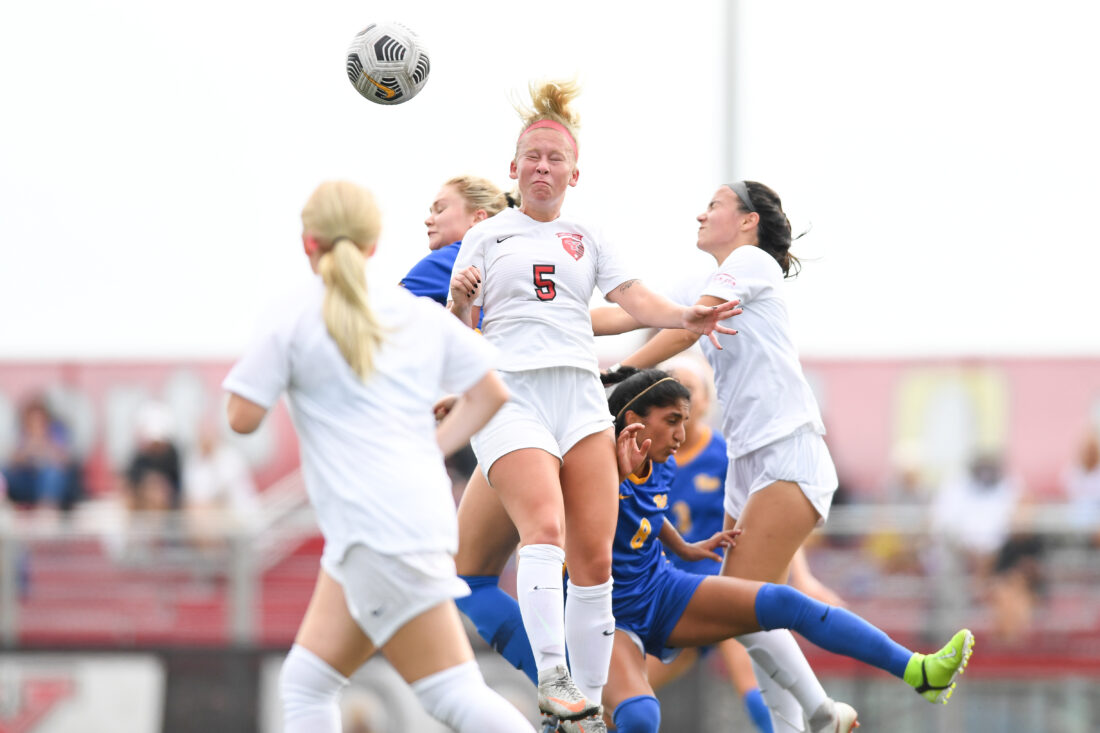 YOUNGSTOWN ­– Not often do teams receive an opportunity to compete in two competitve seasons within a single calendar year.

When the Horizon League made the decision to move their 2020 Fall slates into the Spring, it created an unusual situation that involved teams playing a condensed schedule, recovering for a shorter period of time compared to most years, and then digging right back in for a normal season.

Just under five months ago the Youngstown State’s women’s soccer program (1-7-1) concluded their “2020” season with a 4-1 home victory over Robert Morris. Now, they find themselves already gearing up for the 2021 season.

“Togetherness,” is what coach Brian Shrum emphasizes going into the Fall.

“The one thing that we got taken away from us last year was the ability to be together,” Shrum said. “So loved ones weren’t able to be around, you had to always be watched doing things.

“So, that’s been our thing. We want to be able to be together. So, that’s all we’re talking about right now. Every moment we can spend together, that’s what we’re doing.”

With a sport so physically intense as soccer, Shrum wants to make sure that his team is in tip-top shape by the time camp kicks off prior to the season.

A packet of workout notes provides a pathway to a good summer off.

“I run a lot, interval runs, basically like soccer stuff, just anything that prepares me for my fitness test or beep tests,” commented defender Bethany Rasile, a McDonald graduate. “A lot of cardio, a lot of interval training, sprinting, stuff like that.

“I think we have a really good team chemistry, everyone is very close. We had a big group of girls come in this year, but we all bonded really quickly, we all get along really well, and I think that just helps overall because we’re all very supportive of one another.”

In a typical season, teams play a series of friendlies during the Spring, but following a unusual freshman campaign where the calendar was all over the place, sophomore Abby Knight, an Austintown Fitch grad, finds herself more at ease.

“I feel like I’ve grown so much, and I think that having last year being more relaxed, it only encouraged me to get even better this year to make an impact on the league,” Knight said. “My freshman year, I was definitely a little shy, a little shy off the ball, and I was really quiet and I didn’t really communicate with my team as much.

“But, I feel like gaining a year of seniority I guess you can say, I’m starting to be a little more vocal, and we had some freshmen come in that are in the same position. So, it’s nice to be able to express myself through talking to them and giving them advice.”

With over ten new faces on the roster, the Penguins had changed up their defensive sets, now utilizing a three-back system, with two outside midfielders.

“It’s challenging because we have to stay really compact as a defensive line, especially with the three back,” Rasile, who plays on the outside, explained. “We settled in really quick, adjusted, and the outside mids come in to help on defense, so I think it’s working out so far.”

Joining the aforementioned duo is senior captain Jordan Evans, another Fitch graduate and one of five seniors on the Penguins roster.

As one of the younger players on the team, Knight has looked to Evans for guidance throughout her brief time at Youngstown State so far.

“Jordan has definitely been my mentor since probably high school, and being that she plays the same position as me (midfielder), she’s kinda been like my idol I guess you can say,” Knight said. “I’ve just tried to mimic what she’s doing, because she gets praised all the time, and I’m like, I wanna be like Jordan.”

Youngstown State recently faced off with Pitt at home during their first friendly of the Fall. They’ll play Buffalo, the MAC regular season champs from the Spring, on Sunday as well.

The Penguins kick off their season with a trio of road contests. They’ll play at Bucknell on August 19th before their home-opener on September 2nd against Marshall.

“I just think it’s about taking every day for what it is,” Shrum said. “There’s really, I don’t think anything that needs to change, it is what it is. We know we have a Fall season so, we just prepared all summer like we would have, planning, putting the schedule together, putting our pre-season together.

“We’re just fortunate to have this opportunity, which is an absolute pleasure at the moment.”


Today’s breaking news and more in your inbox