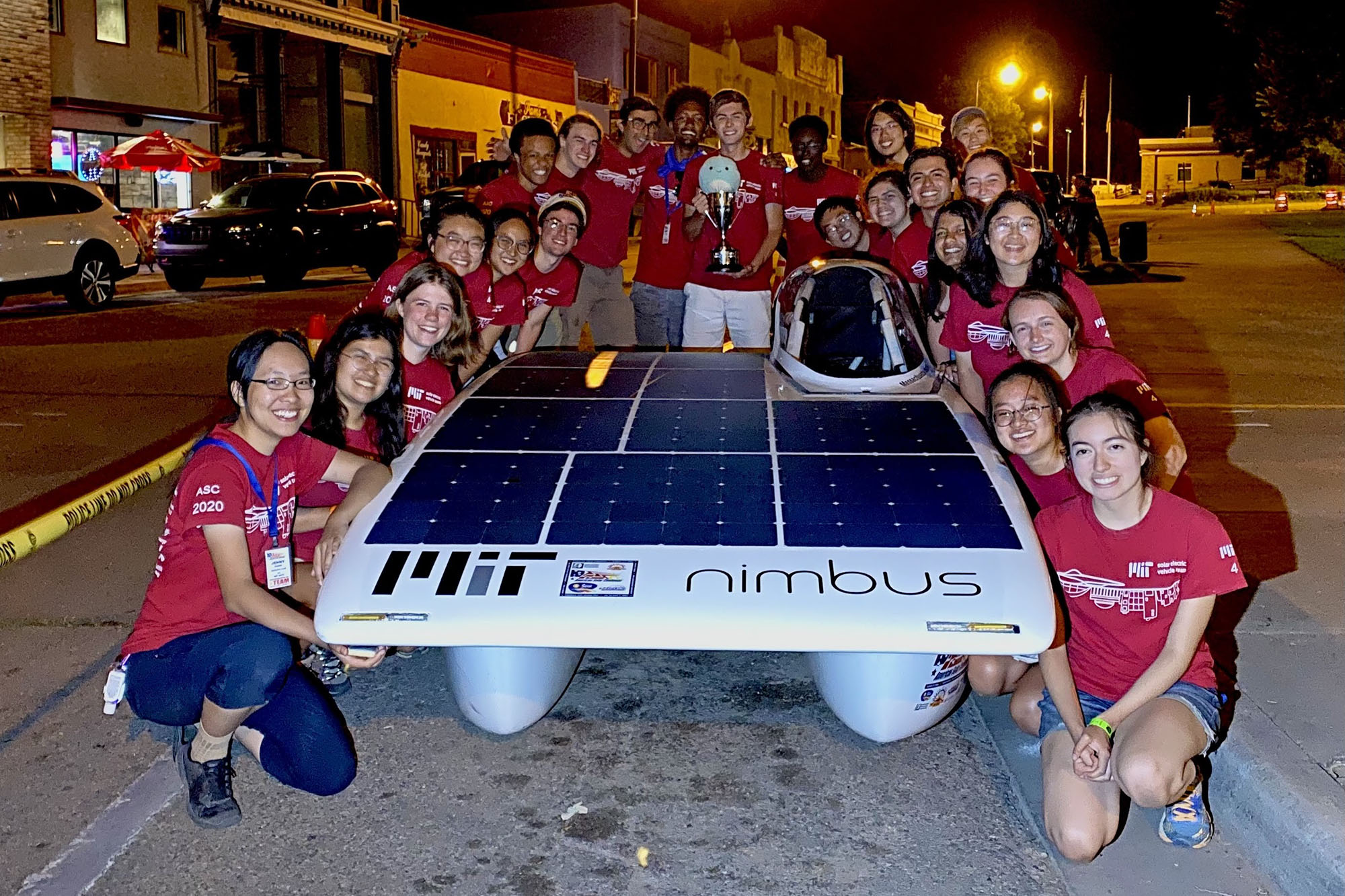 After three years of hard work, the MIT Solar Electric Vehicle Team took first place at the 2021 American Solar Challenge (ASC) on August 7 in the Single Occupancy Vehicle (SOV) category. During the five-day race, their solar car, Nimbus — designed and built entirely by students — beat eight other SOVs from schools across the country, traversing 1,109 miles and maintaining an average speed of 38.4 miles per hour.

Held every two years, the ASC has traditionally been a timed event. This year, however, the race was based on the total distance traveled. Each team followed the same prescribed route, from Independence, Missouri, to Las Vegas, New Mexico. But teams could drive additional miles within each of the three stages — if their battery had enough juice to continue. Nimbus surpassed the closest runner-up, the University of Kentucky, by over 100 miles.

“It’s still a little surreal,” says SEVT captain Aditya Mehrotra, a rising senior in electrical engineering and computer science. “We were all hopeful, but I don’t think you ever go into racing like, ‘We got this.’ It’s more like, ‘We’re going to do our best and see how we fare.’ In this case, we were fortunate enough to do really well. The car worked beautifully, and — more importantly — the team worked beautifully and we learned a lot.”

Two weeks before the ASC race, each solar car was put through its paces in the Formula Sun Grand Prix at Heartland Motorsports Park in Topeka, Kansas. First, vehicles had to perform a series of qualifying challenges, called “scrutineering.” Cars that passed could participate in a track race in hopes of qualifying for ASC. Nimbus placed second, completing a total of 239 laps around the track over three days (equivalent to 597.5 miles).

In the process, SEVT member and rising junior in mechanical engineering Cameron Kokesh tied the Illinois State driver for the fastest single lap time around the track, clocking in at three minutes and 19 seconds. She’s not one to rest on her laurels, though. “It would be fun to see if we could beat that time at the next race,” she says with a smile.

Nimbus’s performance at the Formula Sun Grand Prix and ASC is a manifestation of team’s proficiency in not only designing and building a superior solar vehicle, but other skills, as well, including managing logistics, communications, and teamwork. “It’s a huge operation,” says Mehrotra. “It’s not like we drive the car straight down the highway during the race.”

Indeed, Nimbus travels with an impressive caravan of seven vehicles manned by about two dozen SEVT members. A scout vehicle is at the front, monitoring road and weather conditions, followed by a lead car that oversees navigation. Nimbus is third in the caravan, trailed by a chase vehicle, in which the strategy team manages tasks like monitoring telemetry data, calculating how much power the solar panels are generating and the remaining travel distance, and setting target speeds. Bringing up the rear are the transport truck and trailer, a media car, and “Cupcake,” a support vehicle with food, supplies, and camping gear.

Leading up to the three-week event, the team devoted three years to designing, building, refining, and testing Nimbus. (The ASC was scheduled for 2020, but it was postponed until this year due to the Covid-19 pandemic.) They spent countless hours in the MIT Edgerton Center’s machine shop in Building N51, making, building, and iterating. They drove the car in the greater-Boston area, up to Salem, Massachusetts, and to Cape Cod. In the spring, they traveled to Palmer Motorsports Park in Palmer, Massachusetts, to practice various components of the race. They performed scrutineering tasks like the slalom test and figure eight test, conducted team operations training to optimize the caravan’s performance, and, of course, the “shakedown.”

“Shakedown is just, you drive the car around the track and you basically see what falls off and then you know what you need to fix,” Mehrotra explains. “Hopefully nothing too major falls off!”

At the conclusion of the race, Mehotra officially stepped down and handed SEVT’s reins to its new leaders: Kotesh will take the helm as team captain, and rising sophomore Sydney Kim, an ocean engineering major, will serve as vice-captain. The long drive back from the Midwest gave them time to reflect on the win and future plans.

Although Nimbus performed well, there were a few instructive glitches here and there, mostly during scrutineering. But there was nothing the team couldn’t handle. For example, the canopy latch didn’t always hold, so the clear acrylic bubble covering the driver would pop open. (A little spring adjustment and tape did the trick.) In addition, Nimbus had a tendency to skid when the driver slammed on the brakes. (Driver training, and letting some air out of the tires, improved the traction.)

Then there were the unpredictable variables, beyond the team’s control. On one day, with little sun, Nimbus had to chug along the highway at a mere 15 miles per hour. And there was the time that the Kansas State Police pulled the entire caravan over. “They didn’t realize we were coming through,” Mehrotra explains.

Kim thinks one of the keys to the team’s success is that Nimbus is quite reliable. “We didn’t have wheels falling off on the road. Once we got the car rolling, things didn’t go wrong mechanically or electrically. Also, it’s very energy efficient because it’s lightweight and the shape of the vehicle is very aerodynamic. On a nice sunny day, it allows us to drive 40 miles per hour energy-neutral — the battery stays at the same amount of charge as we drive,” she says.

The next ASC will take place in 2022, so this year the team will focus on refining Nimbus to race it again next summer. Also, they’ve set their sights on building a car to enter in the Multiple Occupancy Vehicle (MOV) class in the 2024 race — something the team has never done. “It will definitely take the three years to build a good car to compete,” Kotesh muses. “But it’s a really good transition period, after doing so well on this race, so our team is excited about it.”

“It will be challenging for them, but I wouldn’t put it anything past them,” says Patrick McAtamney, the Edgerton Center technical instructor and shop manager who works with all the student clubs and teams, from solar vehicles to Formula race cars to rockets. He attended ASC, too, and has the utmost admiration for SEVT. “It’s totally student-run. They do all the designing and machining themselves. I always tell people that sometimes I feel like my only job is to make sure they have 10 fingers when they leave the shop.”

In the meantime, before the school year begins, SEVT has another challenge: deciding where to put the trophy. “It’s huge,” McAtamney says. “It’s about the size of the Stanley Cup!”