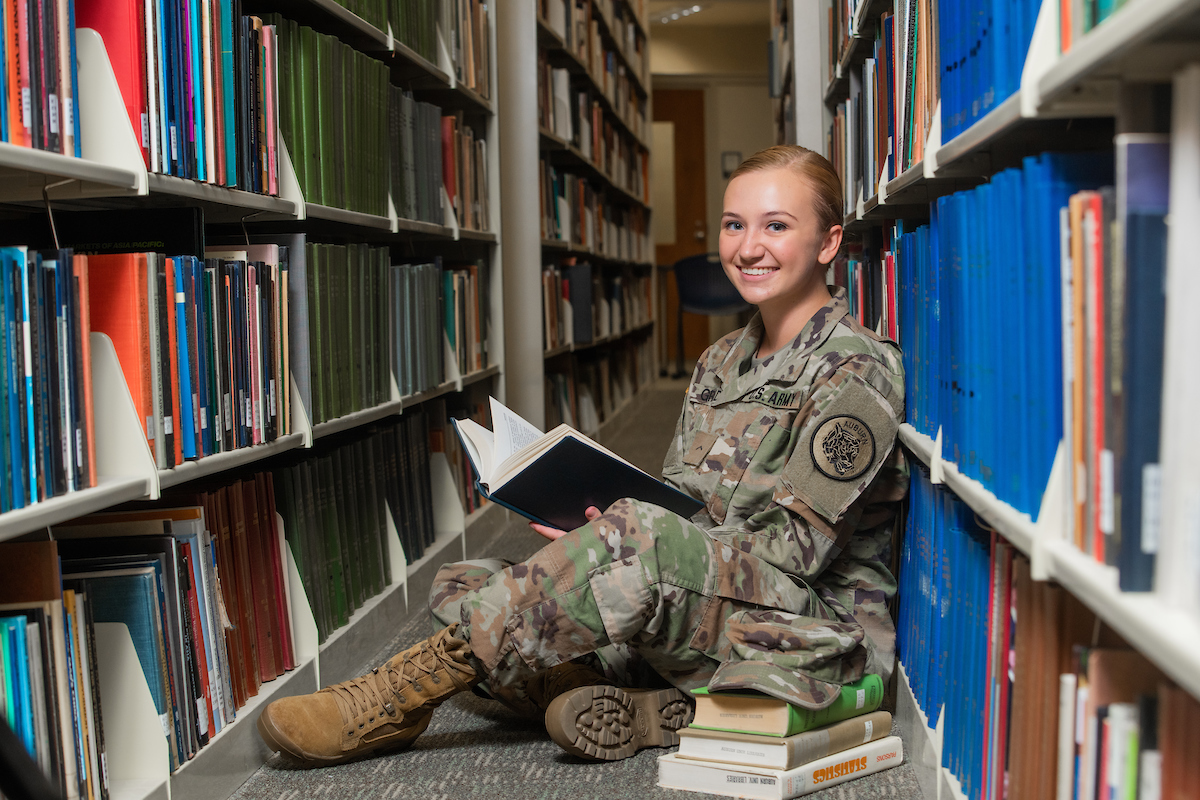 SeAnna Graddy’s first experience as an Auburn student was not quite like the experience of many students before her.

Last summer, the Fayetteville, Georgia, native attended Auburn’s freshman orientation, Camp War Eagle, or CWE, just like incoming freshmen had done for numerous years, except hers was completely virtual. The formerly two-day event, which included seeing all the sights on Auburn’s campus and meeting plenty of her new classmates, now consisted of Zoom sessions from her bedroom.

Graddy, an industrial and systems engineering major in the Samuel Ginn College of Engineering, also is a member of the Army ROTC, or Reserve Officer Training Corps.

Not only is Graddy an ROTC cadet and a CWE counselor, but she also serves as mental health officer for her sorority, Delta Delta Delta. In this position, she is responsible for spreading awareness about mental health and making sure that fellow sorority members are equipped to handle the stress and pressure of college life.

From camper to counselor

It is not extremely common for a rising sophomore to be selected as a CWE counselor, but that doesn’t mean it is impossible.

“Honestly, I tell my freshmen that I’m a freshman with them,” said Graddy. “I’m experiencing this because I wanted to go through it in person, and it was hard, honestly, because everyone else is older than me.”

In the summer of 2021, Camp War Eagle was held in-person for the first time since going virtual due to the COVID-19 pandemic. With no experience of an in-person CWE, Graddy was entering uncharted waters.

“The other counselors were like, ‘Oh, when we went to camp, it was two days and we did this, this, this and this,’” said Graddy. “Well, I was behind a computer screen, and it was challenging because I was leading something that I had never experienced before. But I’ve enjoyed it. It has literally been the best summer, and I could not have planned it any better.”

Becoming a CWE counselor was not always a part of Graddy’s plan. It was more a spur-of-the-moment decision thanks to “Auburn’s persistent messaging.”

“I lived in the Village [residence hall] this past year, and over by Aubie Hall, there was a big banner that said ‘Apply for Camp War Eagle,’ and it had the due date on it,” said Graddy. “I would walk past it every single day, and one day, I thought, ‘I should apply.’ The day before it was due, I filled out the application.

Graddy ended up making it through the first round of interviews, and it was during the second round that she found an opportunity to stand out.

“The second-round interview is an individual one,” she said. “You either dress up like something crazy, or you bring an object that represents something to you.”

She decided to bring a bungie cord.

“The story that I had behind it was that bungee cords are strong,” Graddy said. “But they’re also able to attach to so many different things and be durable, yet flexible at the same time. And I explained about coming into college in the middle of a pandemic and diving headfirst into college and doing ROTC. Also, just applying for CWE and everything else I’m involved in, I just thought that I was very multifaceted, strong and durable.”

Graddy had obviously done well enough in her interview to get the position, but it came to her as a surprise.

“I had no clue that callouts were happening,” she said of the process where students are invited to join organizations. “I was in the library studying for a chemistry test, and my phone started blowing up with congratulations. Callouts were on Facebook Live, and I went back and watched them and called my mom. I told her, ‘I just I got the position!’ and she was super excited. When I went back, I did not get much studying done.”

Like CWE, Graddy didn’t initially plan on joining Army ROTC. While trying to decide her next steps after high school, her favorite high school teacher gave her the nudge that she needed.

“Her husband was retired Army, and her son was in the Army ROTC program in Tennessee,” Graddy said. “I was having a crisis one day during my junior year of high school and I was like, ‘I have no clue what I want to do with my life. I’m too smart to not know what I’m going to do.’

“She told me, ‘Well if you want to do military, you could do ROTC. They have a scholarship too.’ It sparked something in my brain, and I went home and did so much research on it. I looked up like every ROTC program at any school I’d ever be interested in. I have no connection to the military, so I did all this research on my own, and I went to my parents, and I told them that I’m going to apply for this scholarship. If I get it, I’m going to join the Army.”

With her scholarship secured, Graddy’s original plan was to attend the University of Tennessee, but her mother, Lori, wanted her to visit Auburn due to its close proximity to Fayetteville.

While on the way to Auburn, Graddy still wasn’t sure if it was the right choice for her.

“We visited, and the whole way down here, I couldn’t see myself going to Auburn,” Graddy said. “I already had my mind made up, and I came here and absolutely fell in love with it. I could not imagine being anywhere else in the whole world.

Graddy’s decision was made, and she contacted Auburn’s ROTC program and quickly chose to attend Auburn on her ROTC scholarship.

Life as a cadet

Being an ROTC cadet while attending Auburn is no easy task. There is a lot of hard work and dedication that goes into it, but Graddy is handling it just fine.

“We have physical training three days a week: Monday, Wednesday and Thursday,” Graddy said. “Depending on what the workout is and what the day is, we usually have to get there anywhere from 4:30 to 5:45 in the morning.”

After “PT,” the cadets attend classes in the Nichols Center, where they learn things such as Army basics and different battle techniques. It’s on Wednesday afternoons that the cadets can get out and get some real-world training.

“I say it’s like playing Army in the woods,” Graddy said. “We wear a uniform, and we have our helmets and stuff. We bring all of our tactical gear, and we go out and actually execute different things that we’ve learned about in the classroom.”

Graddy is already geared up for excellence, being highly ranked among her class, and she hopes she will hold a team leader position in the coming spring. She is also prepared to help out the Army ROTC program as much as she can. She is often asked to talk to new and potential recruits to help them make their decisions.

“I’m always willing to go help,” Graddy said. “I’ve been called in to talk to several people who have gone through the scholarship process or are just coming and are interested in the program. I’ve talked to several girls, and they usually get me to talk to the girls because I can give them a girl’s perspective of how everything is.”

Assistant Professor of Military Science for Auburn’s Army ROTC program, Maj. Morrecus Foster, is quite proud of her and the things she has accomplished for the program in such a short time.

“SeAnna Graddy epitomizes servant leadership,” Foster said. “She is always willing to be a steward of Auburn’s Army ROTC program by giving any assistance to current ROTC cadets and future ones.”

There is so much more that ROTC cadets do on a daily basis, but Graddy feels like she has gotten into the swing of things as she looks toward her future.

“I have realized that I could do so many things,” she said. “There’s so many different options. I could be an engineer. I could be a chaplain. I could go into Combat Arms and fly helicopters. Who knows?”