Gasherbrum I, aka Hidden Peak, gave an experience rare in recent years. A few climbers, none of them using O2, broke trail and fixed their own ropes on an otherwise lonely peak. It must have felt like 8,000m climbing back in the 1980s.

Marco Confortola, with two porters, was the first to reach Base Camp. On July 29, three more joined them: Mario Vielmo of Italy, Ali Musa of Pakistan, and Flor Cuenca of Peru. 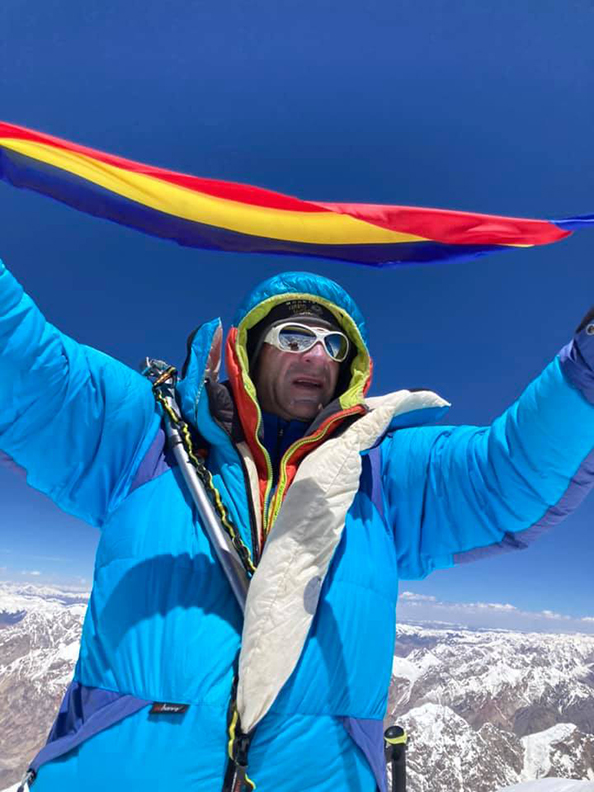 Justin Ionescu of Romania summited both Gasherbrums without bottled oxygen in less than 10 days.

“After so many flight cancellations (four in my case), we barely had time to acclimatize,” Cuenca told ExplorersWeb. “By then, Confortola had fixed rope almost to Camp 2.” 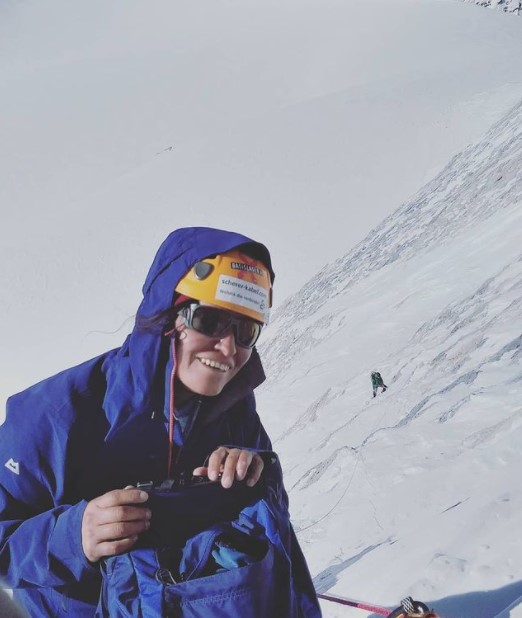 A Czech climber also helped them fix rope but had to return home before the summit push. When that push finally began, Justin Ionescu of Romania and Maurice Thon of Germany joined them, just 10 days after they had summited GII.

“A German lady, Karoline, with a porter, made it a total of 10 people,” Cuenca said. “Karoline eventually retreated from C3, and Marco Confortola decided to turn at about 7,700m.”

Another climber, Mario Vielmo, later reported: “Marco told me that the climb above Camp 3 was steep and icy, so if a climber fell, it would drag the others down too. He was not wrong, but then I thought that retreating through 700 vertical metres of similar terrain was also dangerous.”

Vielmo waited for the lead group to emerge from the first couloir, to avoid being straight in their trajectory. However, he admits that the wait seriously weakened him. He climbed the rest of the route behind the other four climbers. It took all his energy to summit. After two past failed attempts, he was elated to reach the top shortly after noon. It was his 12th 8,000’er. 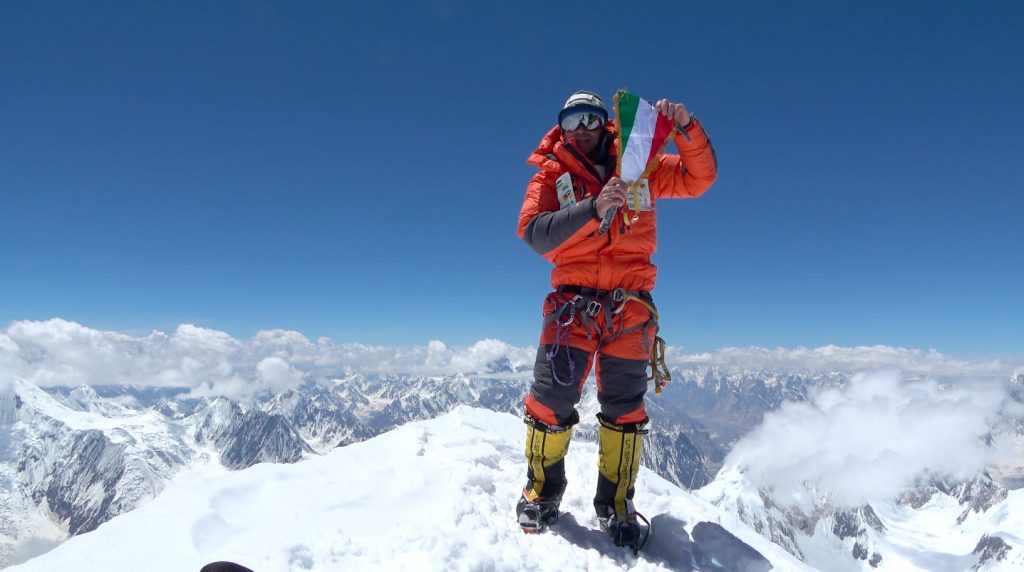 Mario VIelmo on the summit of Gasherbrum I. Photo: Mario Vielmo

According to Flor Cuenca, the team pitched a fourth camp as they climbed, so that they’d have somewhere to rest on the way down. They didn’t use fixed ropes on the upper sections.

“I think the route is entirely fixed when there are commercial expeditions since we saw some rags and pieces of rope, but we didn’t use them,” said Cuenca. She also confirmed that none of the summiters used supplementary O2.

Both Vielmo and Cuenca had been climbing together since they met in 2018 on a previous attempt on G1. The pair also summited Broad Peak in 2019. They agree that G1 was an exhausting climb, both on the way up and on the way down. During their descent, the team had to carry down all their gear and equipment.

Back on the glacier, they also helped two climbers out of a crevasse situation. One fell eight metres but they had roped up and his partner caught him.

All in all, “We made a great team, and that’s rare at high altitude,” said Vielmo. 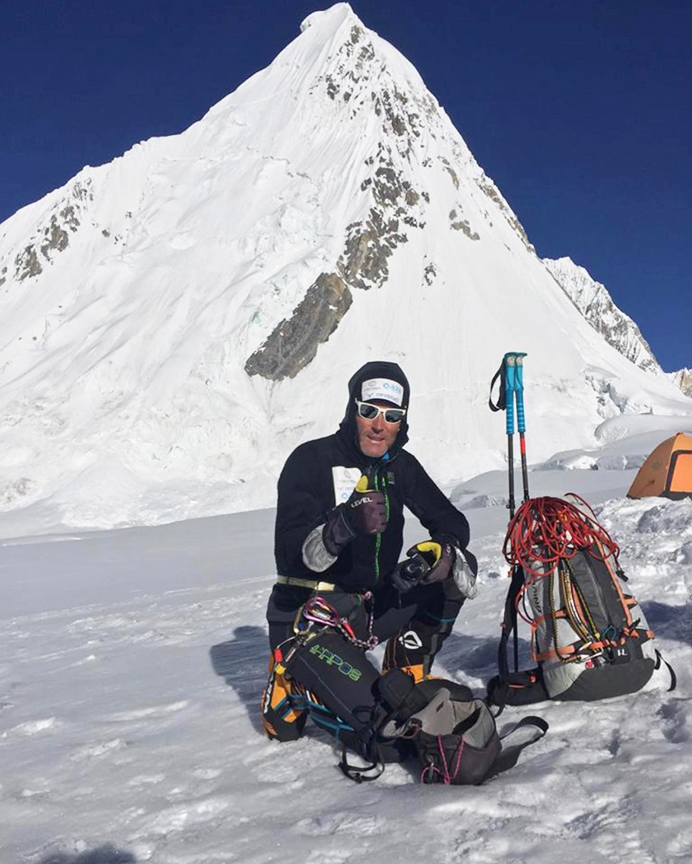 For Cuenca, her climb of GI felt “nearly impossible” but was otherwise an amazing experience for its teamwork and self-sufficiency.

“Back in 2018, I originally wanted to climb G2,” recalled. “Like this year, there were no commercial expeditions, but a lot of individual climbers or small teams — and a total lack of coordination. I was on my own and saw that the climb would be messy with every single soul doing things their own way.”

Instead, Cuenca moved to G1 for a first attempt. Although the summit eluded her that time, she met Vielmo. This time, the pair were successful.

Pakistan climbers played a major role on Gasherbrum II, thanks to the powerful trio of Sirbaz Khan, Naila Kiani, and Ali Raza. By reaching the summit, Khan ticked off number 8 on his 14×8,000’ers quest. And Raza became the local climber with the most 8,000m peaks summited (16). Meanwhile, Kiani (on O2) became the first Pakistani woman to summit any Pakistani 8,000’er. 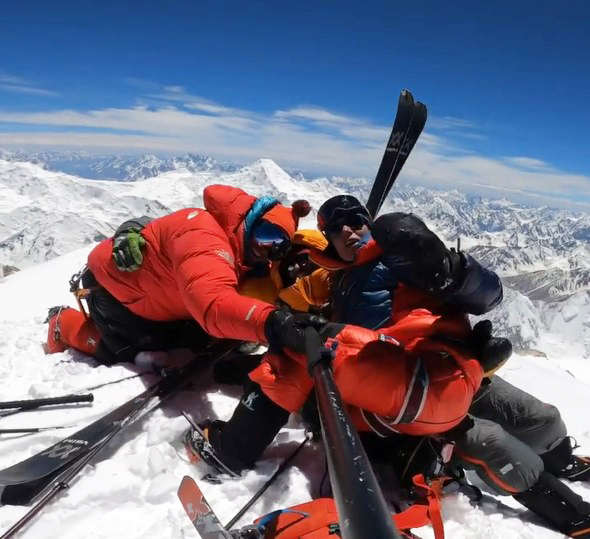 They were part of a large group that pooled their efforts to reach the top of GII on July 18. At least six teams succeeded: Besides the Pakistanis, teams from Poland, the Czech Republic, Romania, and Spain, as well as a joint Czech-Slovak group, also summited.

A French team of Boris Langenstein, Tiphaine Duperier, Guillaume Pierrel, and Aurelia Lanoe both summited and skied back down to Camp 1. It counts as a complete descent since C1 lies on a flatish glacier. 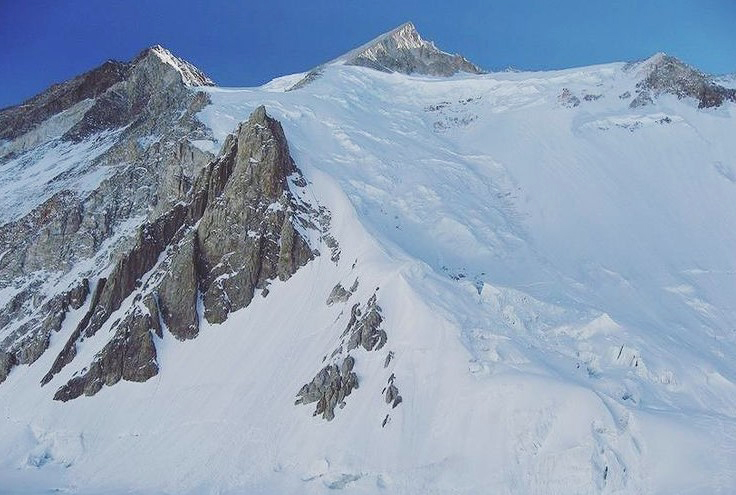 Finally, on July 26, at least one more ( quite eccentric) climb occurred. Philippe Genin, the self-styled Pianist of the Summits, carried an electronic keyboard (and two tripods to support it!) in his backpack. At the summit, he plinked out a ditty.