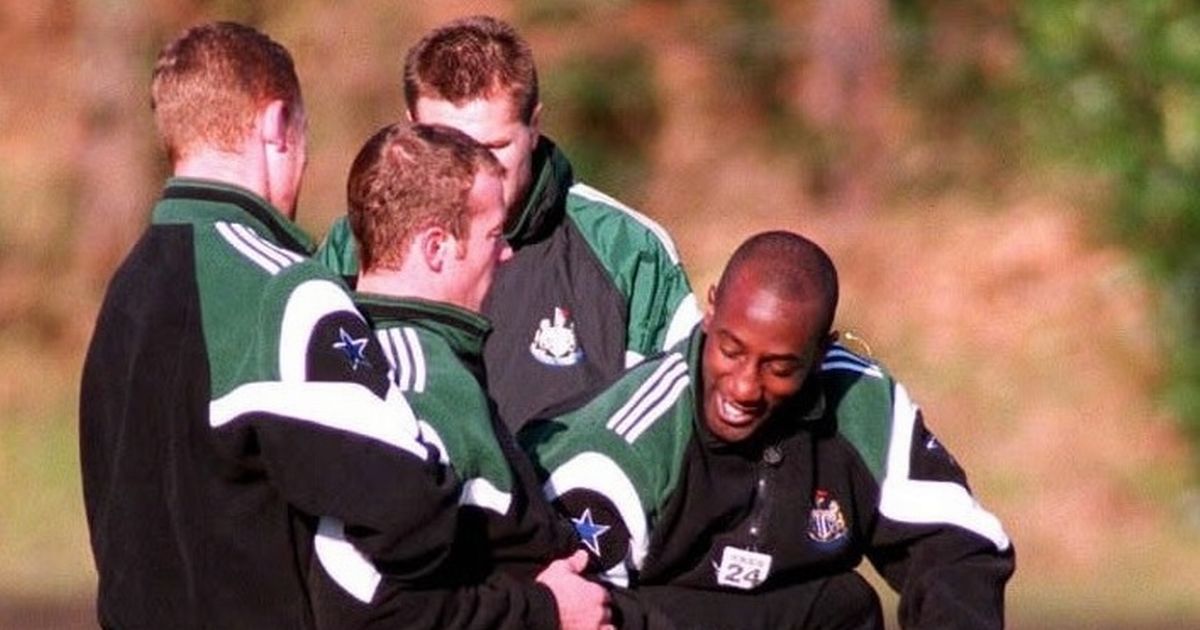 The injured Tino Asprilla emerged from the treatment room and hobbled across the training pitches in full scuba gear – goggles, flippers and all – without saying a word.

Newcastle United players were deep into a intense training session when the pitch invader surprised his unsuspecting team-mates and left them howling with laughter.

It was one of Des Hamilton’s first experiences of life at Maiden Castle following his £2m move from Bradford City in 1997. You get the feeling the former midfielder was only too happy to look back on moments like that.

READ MORE: Graeme Jones is going to be a ‘wanted man’

New arrivals were certainly tested on those training pitches – some players could not cope with the speed of the nine-a-side games – and their buttons were pressed off the field, too.

There were no cliques in this dressing room but, boy, did the players love a practical joke and Hamilton was not spared.

In a strange way, those ‘eye-openers’ helped Hamilton to settle in and ‘realise these superstars are just like anyone else’ – even if one prank proved particularly costly.

“I thought we were signing someone’s shirt,” he said. “Obviously not. It was someone’s best gear that they came to the training ground in.

“It was Alan Shearer’s dodgy gear, shall we say, that looked like a kind of Newcastle top with black and white colours so Rob Lee got me to naively sign it.

“Needless to say, I went home in my training kit because everything that belonged to me was then chopped to a million pieces. That was my first week being introduced to how the banter goes up there.”

It did not stop there. On another occasion, a few months later, Hamilton was handed the captain’s armband by Kenny Dalglish as he returned to Valley Parade for a pre-season friendly against former club Bradford.

With his family and friends watching on, Hamilton could not have been prouder. However, as Hamilton went to lead the visitors out of the tunnel, his Newcastle team-mates dropped back so the skipper ran out alone.

Is it any wonder that those first few months were ‘mind-blowing’ as Hamilton shared a dressing room with gifted footballers as well as expert pranksters?

As Hamilton points out, ‘everyone loved everything’ about Newcastle at the time so it ‘just made total sense’ to join the Magpies – particularly after he received a personal phone call from Dalglish.

“Newcastle were the team at the time and for any young player, being contacted by Newcastle was just a case of, ‘When and where?'” he said.

“Kenny rang us and it was signed and sealed. ‘That’s done. That’ll do for me!’ How often at 20 do you get Kenny Dalglish ringing you?

“I just remember that it was so hard to understand him. I was straining just to hear every single word and not get it wrong.

“Kenny didn’t disappoint. He was a legend of a man. He was a man’s man. He had it all: the nurturing side of knowing exactly what to do, say and expect and, also, he did not put too much pressure on young shoulders. He was an absolute dream to be around to be fair.”

Hamilton had enjoyed a meteoric rise at Bradford, making his debut for his hometown club at just 17, and played a crucial role in the Bantams’ promotion to the second-tier in 1996.

A number of Premier League clubs were keeping an eye on Hamilton’s progress but it was Newcastle who eventually stumped up the £2m as the Yorkshireman became Dalglish’s first signing at the club in March, 1997.

Injuries meant Hamilton did not make his debut for several months, but the new arrival scored on his first competitive outing against Hull City in the League Cup.

All these years later, Hamilton would ‘defy anyone to give me a better feeling’ than walking out at St James’ Park that first time and this comes from a man who started for the Magpies at the Nou Camp.

Newcastle may have lost that Champions League group clash against Barcelona but, unsurprisingly, that game will live with Hamilton ‘forever’ as he did battle with one Pep Guardiola in the middle of the park.

Let’s just say that Hamilton was a big fan of his midfield partner that night – David Batty.

“It was like being on a school trip,” he said. “I would go home on the weekend and tell my friends how good these guys were and David Batty was definitely one of them.

“He was someone who never warmed up as well. I’ve never known anything like it. He could go from nought to 60 in a blink of an eye and I never saw him do a stretch.

“What he had to do, he did but he could turn up at ten to three, get changed, kick-off and he would be absolutely fine. I suppose he’s a Yorkshireman – we’re built strongly up here!”

Hamilton made 17 appearances in his first full season at Newcastle, but that was as good as it got during his time on Tyneside.

Dalglish was replaced by Ruud Gullit in August, 1998 and Hamilton never played for the Dutchman, who loaned the midfielder out and did not even give him a squad number.

As far as Hamilton is concerned, the lasting effects of an ankle ligament injury he suffered in his first summer at the club did not help matters.

“I didn’t know what it was. It happened in the friendly against Juventus in my first pre-season and I didn’t recover from that until Sir Bobby came a few years later,” he said.

“It was getting to a time of me getting a chance again and my ankle broke down. We didn’t know what it was and it was just weeks and months of trying to find out until we found a piece of bone had broken away and kept disappearing so the scans weren’t picking it up.

“That was a bit of a disappointing time because it was such a long time of injuries and relapses.”

Sir Bobby brought Hamilton in from the cold in 1999 and the forgotten man made his first appearance for Newcastle in 494 days in the the newly-appointed manager’s first European game in charge.

However, that UEFA Cup win against CSKA Sofia would prove Hamilton’s final outing for Newcastle; the £2m signing was again loaned out, to Norwich and Tranmere, before he was eventually released in 2001.

Hamilton is the first to acknowledge that there were a few regrets’ and while he does not let it ‘sadden’ him, the Bradford native admits it is a ‘shame’ he did not ultimately prove his worth.

“I would have loved to have been able to show the Newcastle fans my full potential but it’s one of those where you have to look back and take what you can, and just see the positives,” he said.

“It was still a positive time up there. Unfortunately, I had the injuries. It is what it is but I would have loved to have got the opportunity to be healthy and show them why they spent so much money on a young kid.”

Hamilton went on to have spells at Cardiff, Grimsby, Barnet but retired from professional football at the age of just 27 after being diagnosed with an overactive thyroid.

A small gland in Hamilton’s neck was producing too much of the thyroid hormones, which left him sapped of energy and unable to keep weight on, so the former Newcastle player had to call it a day.

Hamilton, naturally, needed time to assess his options after his unexpected early retirement but an invitation to give a presentation to young children on the importance of being fit and active set something off in him.

The 44-year-old started off as a health mentor in schools but is now working as the PE lead at Lister Primary School in Bradford.

In some ways, Hamilton has gone from one dressing room to another and it goes without saying that ‘you all have to be singing from the same hymn sheet or, otherwise, it’s all going to come crashing down’.

“All my memories with teachers and through school were really positive and I was lucky enough to have the best PE teachers,” he added.

“For me, it was about giving back because without those PE teachers, those mentors, those role models in your life, I wouldn’t have become a professional footballer.

“It was realising that an early age that these guys had been huge for me.”