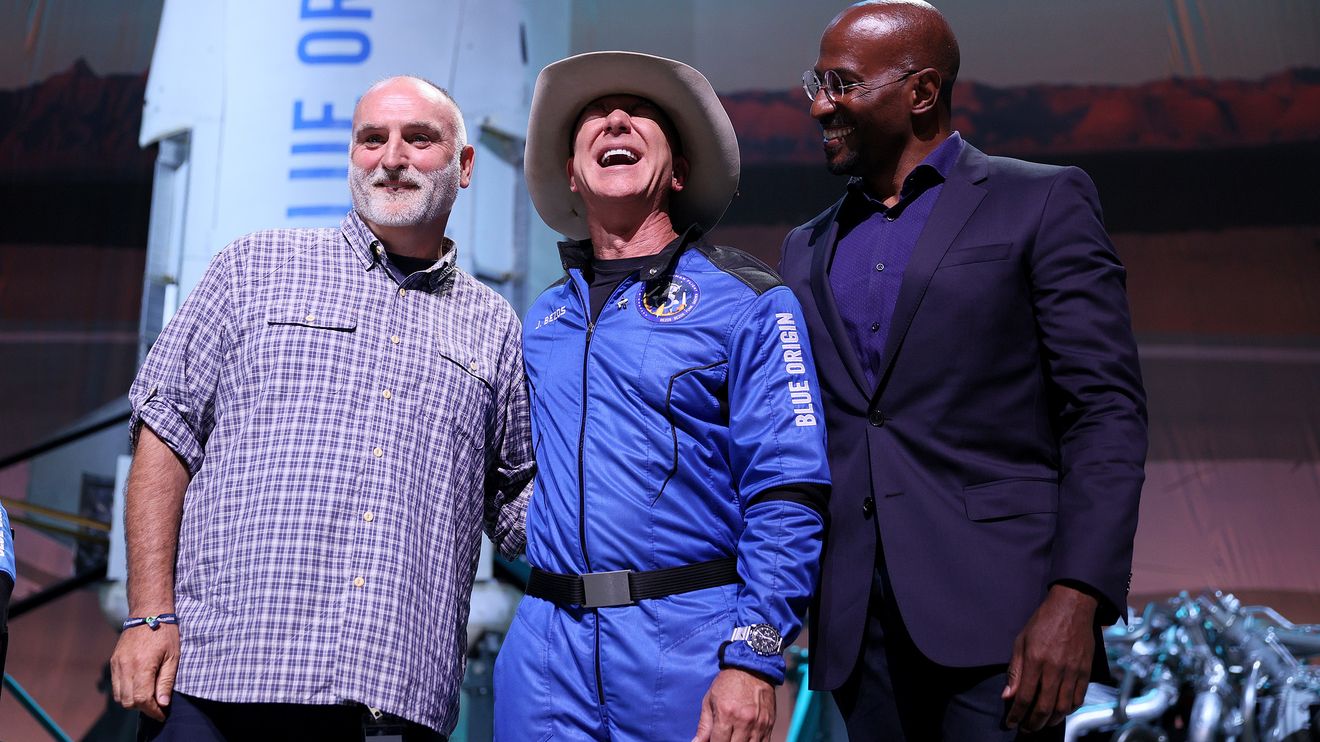 Jeff Bezos followed up his suborbital rocket trip with the news that he’s handing out $100 million each to two men who he said “aim high.”

“I have a little surprise for you,” Bezos said at the end of a press conference following the 11-minute ride that took Bezos and three others aboard a rocket built by his space company Blue Origin to the edge of Earth’s atmosphere.

Bezos then announced a new philanthropic initiative consisting of a $100 million award that recipients can “direct to the charities of their choice as they see fit.” He added, “No bureaucracy, no committees. They just do what they want. They can give it all to their own charity or they can share the wealth. It’s up to them.”

Bezos said the Courage and Civility Award “recognizes leaders who aim high and who pursue solutions with courage and who always do so with civility.”

The first two awardees are Van Jones, a CNN commentator and founder of the racial justice nonprofit Dream Corps, and José Andrés, the chef and founder of World Central Kitchen, a nonprofit that feeds people in disaster zones.

Andrés said he wants to double food aid around the world and “change the way 3 billion people, mainly women, cook their food” from dirty cookstoves to clean cookstoves. “A plate of food is a plate of hope,” Andrés said. “It’s the fastest way to rebuild life and communities. And this award itself can not feed the world on its own. But this is a start of a new chapter for us. It’s allows us to think beyond the next hurricane to the bigger challenges we face.”

Jones wrote in an Instagram post following the announcement that he was “beyond honored” to accept Bezos’s award. “In my 30 years as an activist and social entrepreneur, I have neither heard nor dreamed of a charitable prize of this magnitude.”

The award is the latest in a recent flurry of philanthropy from the world’s richest person. Bezos, who is worth an estimated $204 billion, recently announced a $200 million donation to the Smithsonian Institution to build the Bezos Learning Center at the National Air and Space Museum.

Club for the Future, the foundation associated with his space company, Blue Origin, recently announced that it would offer grants of $1 million each to 19 space-related nonprofits. The money for the grants was generated by the auction that sold a seat aboard Blue Origin’s New Shepherd rocket trip.

In March, Bezos promised to spend $10 billion over the next 10 years to address climate change.

Bezos is the second of three billionaires headed to the edge of space this year. His trip, along with flights by Virgin Galactic
SPCE,

founder, SpaceX’s Elon Musk, has prompted criticism that billionaires’ resources would be better spent solving Earth’s pressing problems — or, some have said, on paying more taxes.

A recent investigation by ProPublica found that Bezos and Musk are among several billionaires who have paid relatively little in federal income taxes. (Bezos and Musk did not comment on ProPublica’s reporting.) Meanwhile, their fortunes have swelled during the pandemic.

“
‘If we ever want to return to an era where we accomplish incredible things together as a society, we need to start taxing the rich again. If Jeff Bezos can afford to go to space, he can afford to pay more in taxes.’
”

Blue Origin did not immediately respond to a request for more details on the new award or comment on recent criticisms that Bezos doesn’t pay his fair share in taxes.

Opponents of higher taxes on the wealthy say they could lead billionaires to devote less money to philanthropy. But others argue that billionaire space trips are a symptom of a broken tax system.

“This may be a good day for Jeff Bezos, but it’s a sad reminder of just how far our country has fallen,” said Stephen Prince, vice president of the Patriotic Millionaires, a group of wealthy people who advocate for higher taxes on the rich.

“If we ever want to return to an era where we accomplish incredible things together as a society, we need to start taxing the rich again,” he said. “If Jeff Bezos can afford to go to space, he can afford to pay more in taxes.”

Bezos said after Tuesday’s flight that he wanted to thank “every Amazon employee and every Amazon
AMZN,

customer because you guys paid for all of this.” He added, “So seriously, for every Amazon customer out there and every Amazon employee, thank you from the bottom of my heart very much. It’s very appreciated.”

White House spokeswoman Jen Psaki was asked Tuesday whether NASA had considered using private space companies such as Blue Origin and SpaceX to reduce the costs of space missions for U.S. taxpayers. She responded that the United States is the first country to have private companies taking private passengers to space. “This is a moment of American exceptionalism. That’s how we see it,” Psaki said.

She added that commercial partners will “help us continue advancing to the next stage of our nation’s space exploration” and “investments in space create jobs and improve life here on Earth through climate monitoring and medical advancements, just to name a few, so NASA is excited to see these achievements.”