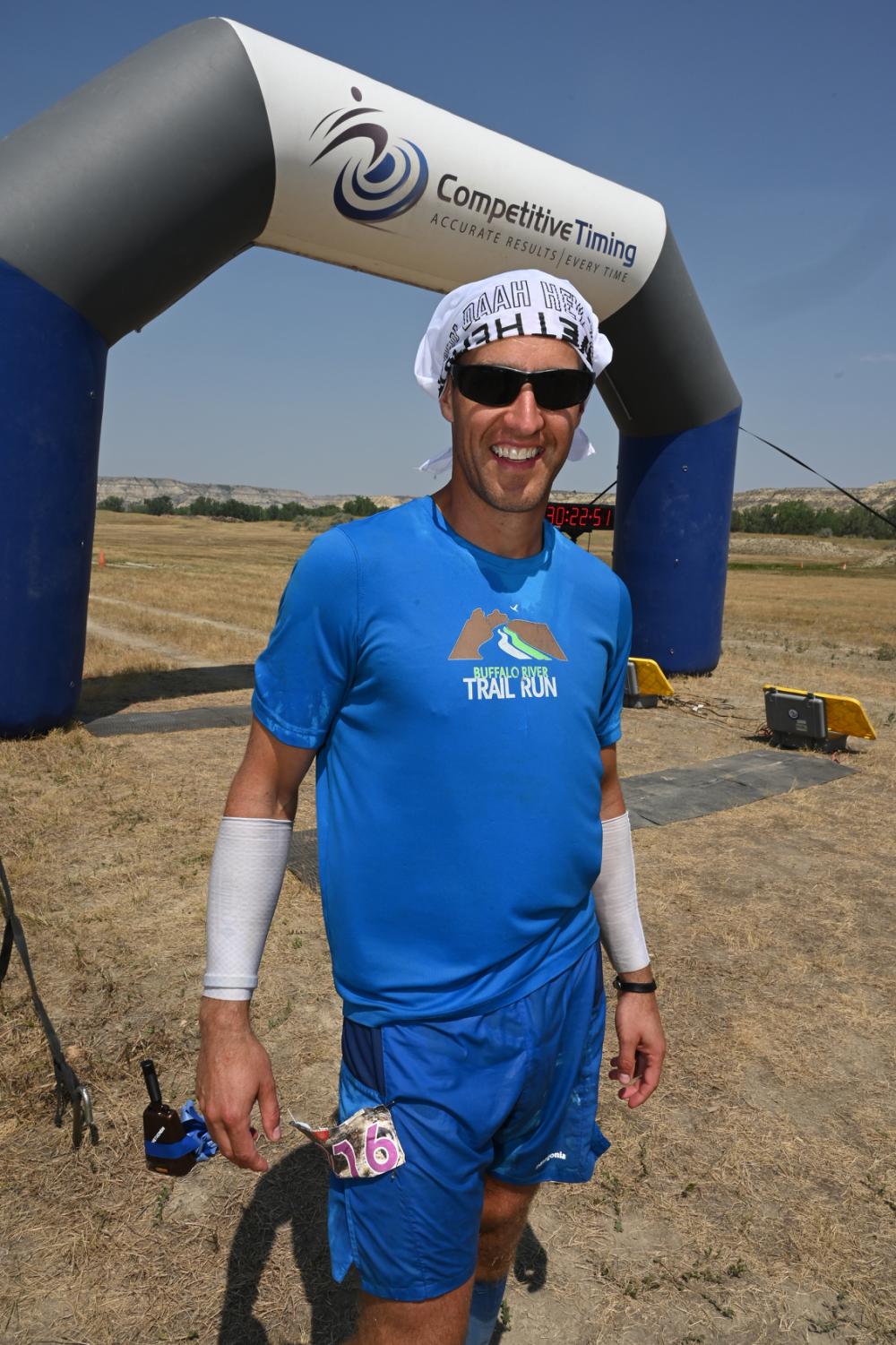 This ultramarathon is like completing four regular 26-mile marathons in a row on a dirt path through hills and gullies, day and night with a head lamp to illuminate the trail. Temperatures reached the low 90s during the day and dipped into the 50s at night. This race, which is normally 106 miles long, became 107.3 as the route was changed due to recent wildland fires.

Miller finished the race in fourth place, and was one of only eight runners to finish the race at all, which began with 21 runners.

“It all began in early January with commitment day, when he committed to run the race. And he said I want to beat last years’ time. He ran that in 34:11 (34 hours and 11 minutes),” said Erika Shupe, Miller’s girlfriend of over three years, and lead supporter for Miller’s support and gear (SAG) team.

Miller has been a runner since before participating in high school track and cross-country while growing up in Fessenden, N.D. He has many 5ks and 10k races to his credit, running his first 50k ultramarathon while at military training at Goodfellow Air Force Base in 2013.

“In 2018 my cousin, Eric, ran the 100-mile Maah Daah Hey and asked me to be a pacer for him. I had so much fun that I decided I had to run it myself the next year,” said Miller.

Another cousin, Maren, was diagnosed with cancer and seeing how much she went through taught him how much a person can endure.

“Maren inspired me to push my body farther than it’s ever gone, so I decided to run the 2019 100-mile Maah Daah Hey ultramarathon, and to run it again this year,” said Miller.

There are few reasons or excuses that can keep Miller from his training and ultimately finishing the race. Things like muscle aches and pains, blisters, running in heat and forest fire smoke and other uncomfortable weather conditions.

In 2019 it was 97 degrees at the 35 mile mark when he ran into a dehydrated person on the trail. Miller started cramping, but continued on.

“A friend who was pacing me said I looked totally out of it at that point. I took a 35 minute nap at 65 miles, and a support runner encouraged me to keep going one leg at a time (with each additional support runner). My best times actually occurred in the last legs because of my team,” said Miller.

Miller has been following an ultra-marathon training plan that includes 50-miles of running on weekends within 24 hours…30 miles on Saturday and 20 miles on Sunday. He used the stair-climber in the base gym to get ready for the 11,905 feet of cumulative elevation gain throughout the course.

“I want people in the unit to realize what a great gym we have and the great resources we have to train out here. I’m hoping I can inspire people to get fit!” said Miller.

He learned a lot from his last race and was shooting for a time under 30 hours.

His plan was to limit his rest to 15 minutes each time, to prevent getting too much lactic acid buildup. He learned to pack ice in his running clothes to help keep his core cooler by watching other runners.

“It’s a trick I learned from the women’s record holder Lisa Holding Eagle, who ran it in 23 hours,” said Miller.

Former Happy Hooligan Nick Ybarra, who was the 2006 North Dakota Air National Guard Airman of the Year, operates the race and runs a non-profit working on ‘saving the Maah Daah Hey Trail.’

The diet throughout the course was carefully planned and choices were made primarily for effect rather than pallet. Hydration was critically important and liquids were consumed in large quantities. Miller even forced himself to drink pickle juice at checkpoints to prevent muscle cramping.

One SAG member was allowed to run with Miller after the 50-mile mark primarily for moral support and for safety, during the night-time hours, wearing headlamps to view the 12-inch dirt path winding up and down the hills and gullies in the badlands rugged terrain.

“I didn’t run very far. Just a couple miles, and that was taxing with the uneven terrain and the ruts and dodging cow pies. I had a cow that looked like it was going to charge me at one point in time,” said Quam, a friend and coworker in the 119th Intelligence Surveillance Reconnaissance Group.

A lot of planning goes into race weekend. Food for the team and for Miller on the course is a science in itself. They camped at CCC Camp Ground, where the race starts, so camping gear is planned out. Cell phone reception is spotty, so communication and checkpoints were carefully thought out.

The runners arrived at 5:30 am at the starting point at the CCC camp ground for a 6:00 am start just south of the north unit of Theodore Roosevelt National Park.

The race shuts down at 6:00 pm on the Sunday of the race, whether you’re finished or not, but Miller was determined to beat last years’ time.

In 2019 he relished a caramel roll after completing the race, and it became a goal to finish the race and eat another caramel roll. The subject came up repeatedly throughout the race during the pit stops.

“He’s got a lot of determination, grit and stubbornness. He always wants to see something done to the end. When he puts his mind to something he’s going to do it and get it done,” said 1st Lt. Kyle Knutson, the 177th Intelligence Squadron commander, who ran with Miller for a stretch during the night.

Race concerns included things like rattlesnakes, mountain lions, over-use injuries and dehydration. A big part of ultra-marathons is eating and drinking and learning to run with a full stomach, and it’s easy to lose the trail in the dark. Half the race is at night, so runners and support have to have headlamps.

“I remember the sun coming up the last time and I got a burst of energy because of the light, and the encouragement of my team,” said Miller.

He didn’t get the same burst of energy when the sun came up this time, but he did keep going with the help of his SAG team encouraging him all the way.

The team is fully committed to the effort throughout the race, driving ahead and waiting for hours at each checkpoint and seeing to Miller’s needs for the brief time at the pit-stop, like a NASCAR pit crew.

“I can’t wait for Brandon to finish because I love him as a friend, and it’s a huge goal to accomplish – but I especially want to see him at the finish because I know I participated in it and maybe helped him through it a little bit… that’s all I can ask, being on the team,” said Senior Master Sgt. Scott Flickinger, the 177th Intelligence Squadron superintendent.

Miller sat at the last checkpoint, with his team anticipating success, as Flickinger shaded him with an umbrella.

“Goals Dave, and people say they can’t do a mile and half. Can you do a mile and a half? Yeah, sure – I’ll do it 70 times for ya… in a row!” Miller said out loud, to himself and the SAG team, as they laughed along with him.

The SAG team and Miller’s family and friends cheered him as he stood up and began his final leg of the journey by himself. The same way he started the day before.

Another big motivator for Miller was his plan to propose marriage to his girlfriend at the finish line. Thoughts of the proposal helped drive him to finish. His cousin Eric gave him the ring to carry for the last 7 mile leg of the race.

Miller feigned a stumble just before crossing the finish line, saying he couldn’t finish. Erika leaned across the line imploring him to get up and finish the last few step, but Miller stayed on one knee and began his proposal.

“Erika, I can’t finish the race without knowing that you’re gonna be my wife!” Miller shouted, as Erika let out a joyous scream.

Miller went on, “You are my best friend, my love, we met through fate and faith, I love you, you support me through everything. I want to be the one that’s your supporter now. Erika Shupe, will you please marry me?”

Erika loudly said yes, while emphatically shaking her head up and down.

They smiled as they crossed the finish line together with friends and family cheering them on, most of them were privy to the proposal prior to the race, which was kept a secret from Erika the whole time.

“I love you so much! I’ve dreamed of this (finish) the last few nights,” Erika said to Miller after jumping into his arms. He held her up, even after completing 107.3 miles.

“It’s funny what the body can do if you push yourself,” said Miller after holding up his fiancé.

“She’s been so supportive and committed to me and this race effort, I just wanted her to know that finishing the race didn’t matter to me as much as she does,” said Miller, as he explained why he proposed a few steps before the finish.

“I’d say I did pretty well. My legs did have a lot of muscle twitching. I’d say it lasted from about mile 32 to about mile 60. My stomach was tied up in knots for about the same amount of time. I had trouble consuming any food, and even water, but in the last 25 that definitely cleared up and that’s what helped me finish stronger,” said Miller shortly after crossing the finish line.

“I didn’t think, physically, that I was always going to be able to finish, but with my great team, I always knew I was gonna,” said Miller as his supports gathered around him.

He completed the race Sunday and was back at work Tuesday.

Miller’s advice for those who may wish to attempt an ultramarathon is: “I think anyone can accomplish something like this, whether physical or mental, you just need to set goals, put in the time, and make sure the effort gets you to that goal. I’m not special. When I started to train for this I struggled to run five miles. If you want it – put in the effort and you can do it!”

This work, Happy Hooligan hoping to inspire others through ultramarathon/Miller runs with purpose and commitment, by CMSgt David Lipp, identified by DVIDS, must comply with the restrictions shown on https://www.dvidshub.net/about/copyright.