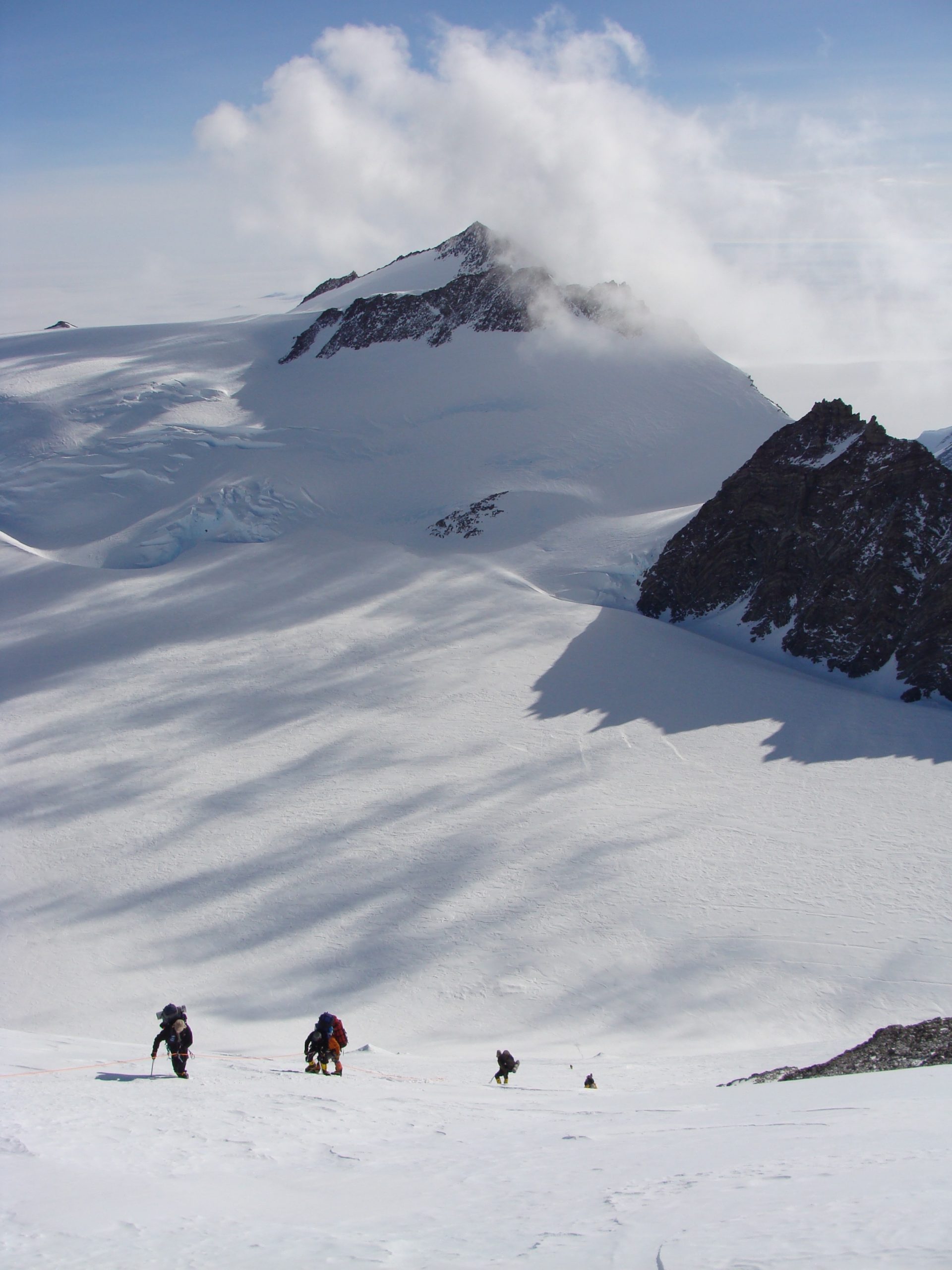 Australian mountaineer and Antarctic veteran Damien Gildea describes the route up 4,892m Mount Vinson, the highest peak in Antarctica and the most difficult to reach of the Seven Summits.

Gildea has summited Vinson three times and completed several first ascents on the surrounding sub-summits. Over the course of seven seasons in the Sentinel Range, from 2001 to 2008, Damien and his teammates climbed dozens of new routes and topped out on other notable mountains such as Mt Shinn, Mt Gardner, and Mt Craddock. In 2006, they produced the 1:50,000 topographical map, “Vinson Massif & the Sentinel Range”.

Historically, the biggest challenge with Mount Vinson has been getting there. The peak was first measured in 1959 and the first ascent was done in 1966. The 1966 American Antarctic Mountaineering Expedition had the support of the U.S. Navy. It helped ferry the team and their gear from New Zealand to McMurdo Base in Antarctica, and then on to the Sentinel Range. The first climbers summited on December 18. 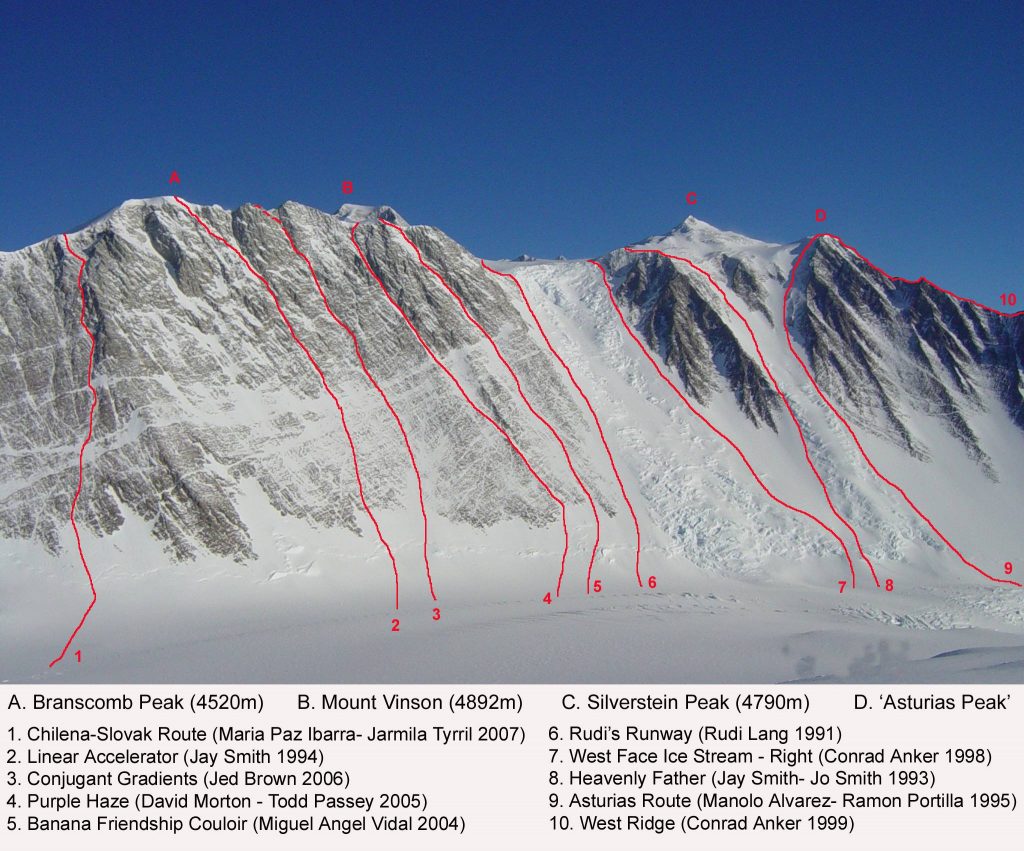 Some non-standard routes up the Vinson Massif. Photo: Damien Gildea

Reaching Vinson no longer requires enlisting the military, but it does take a good deal of money and support. Most climbers are guided and will spend 10 to 12 days in Antarctica. On average, they pay $43,800 for the privilege.

Currently, Antarctica Logistics & Expeditions (ALE) is the only company that flies into Vinson. ALE ended up with a monopoly not by design, but rather as a result of the complex web of environmental red tape, cost, and tricky logistical hurdles that Antarctica presents.

A climber’s journey begins in Punta Arenas, a windy little shipping town in southern Chile. Ideally, climbers should already have some experience in glacier travel, basic crevasse rescue skills, and a good level of fitness.

Gildea suggests that the most important skill is clothing and gear management, especially for fingers, face, and toes. These days, everyone has top-quality gear, but they don’t always know how to use it. Maintaining your body temperature and avoiding frostnip on Mount Vinson requires familiarity with using your gear in extreme cold. Winter camping experience is also important, since correctly siting, securing, and maintaining your tent during storms can be life-saving.

There’s not much to do in Punta Arenas other than check over your gear and wait for the weather to clear for your flight into Antarctica. Getting stuck, sometimes for a week or more, used to be common.

Until 2009, flights headed to the Patriot Hills base. Now, ALE has switched its base of operations to Union Glacier, a more scenic and mountainous location with shelter from the crosswinds that can make landing on the blue ice runways a hairy proposition. The flight to Union Glacier takes around four-and-a-half hours. 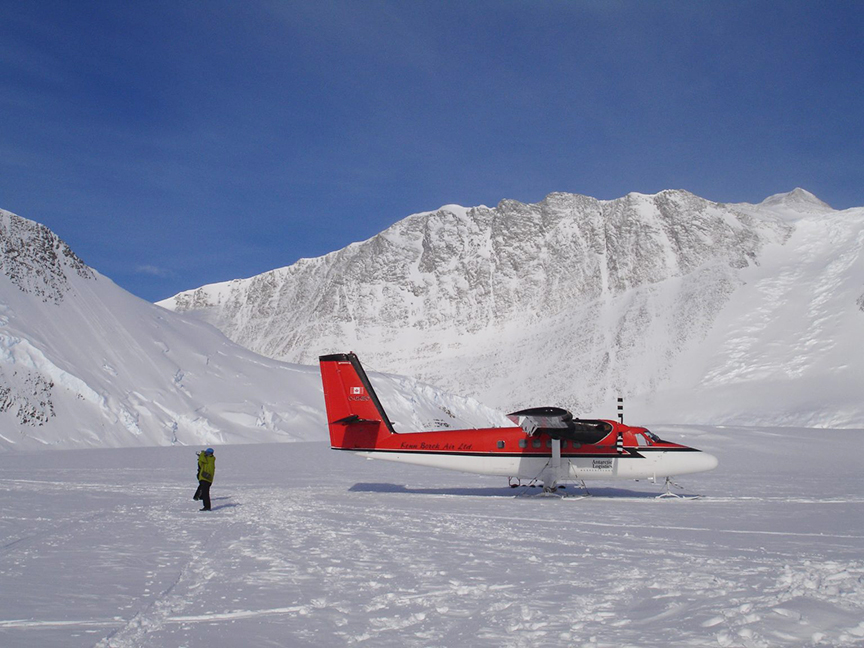 A Twin Otter at Vinson Base Camp. Photo: Damien Gildea

From Union Glacier, it is another waiting game for a flight to Vinson Base Camp. The flight north only takes 50 minutes in a Twin Otter, but the weather can be very different in the two locations. Pilots must wait for the weather to clear sufficiently at both ends.

Since 1993, Vinson Base Camp has been on the lower Branscomb Glacier at 2,100m. Here, ALE has a guide’s tent with communication equipment and supplies. Climbers bring their own expedition tents and usually only spend a couple of days in camp before they set off.

From Base Camp, you head east up the glacier on foot. “It’s a gentle slope of hard-packed snow,” says Gildea, “but it can prove tougher than expected for climbers who are not used to pulling their gear.”

Most climbers spread their load, which is typically around 30 or 40kg, between a pack and a sled. For guided clients, this can be tough, especially if they are used to Sherpas carrying their loads in the Himalaya and Karakorum. 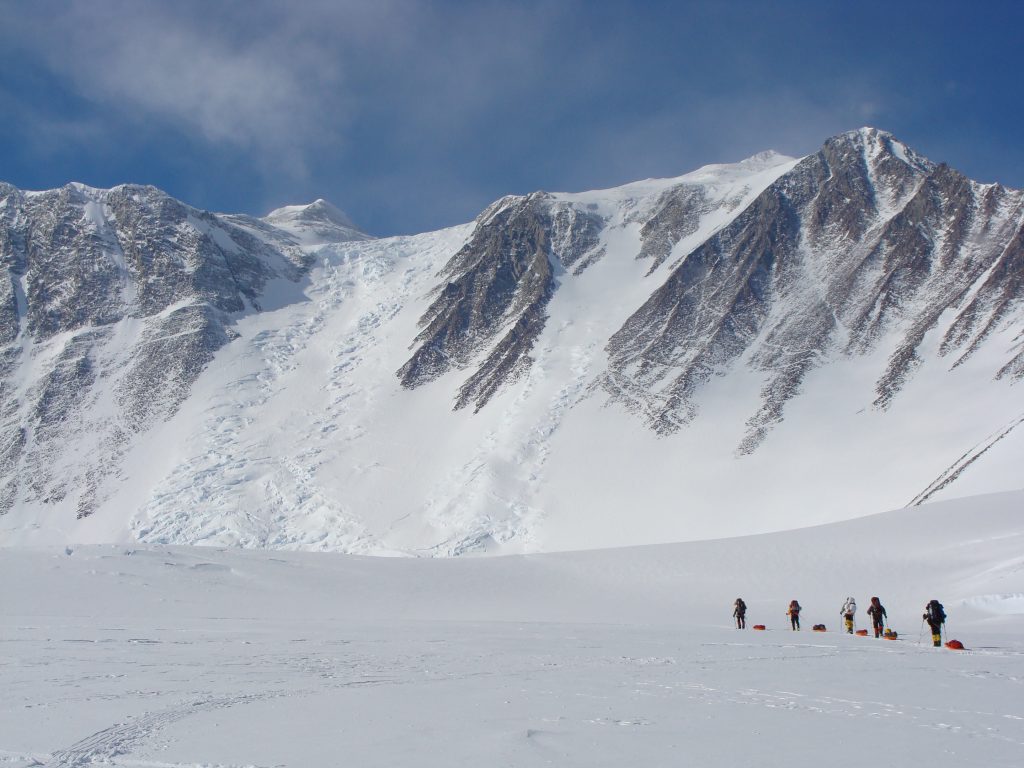 Climbers haul their sleds out of Vinson Base Camp up the Branscomb Glacier toward Vinson. Photo: Damien Gildea

Climbers then make a 90-degree left turn on the glacier, passing through some broken ground along the bottom of Vinson’s west face. After the left turn, it is relatively flat, though there are some small crevasses. Most guided groups spend at least some time roped together for safety.

Low Camp is pitched at 2,700m and is sheltered by the broad, snowy west face. Gildea explains that the time from Base Camp to Low Camp varies considerably: “I’ve known people to do it in two hours or eight hours!”

This reflects the reality of Mount Vinson in 2021. It is primarily a tourist peak. Climbers rarely stray from the established route or climb any surrounding peaks. The vast majority are guided. 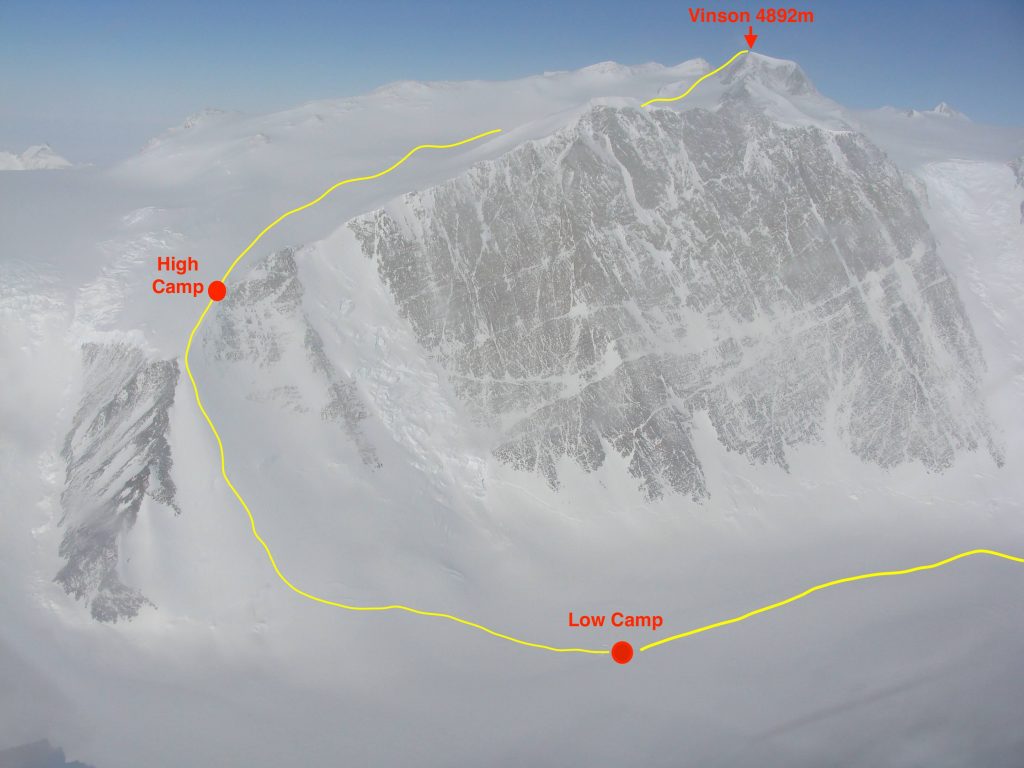 Since 2006, a fixed rope to High Camp has been set up each season. It runs up the left-hand side of the west face. Before 2006, climbers headed north from Low Camp, turned right, then went up a headwall, with crevasses at the top, to a High Camp near the Goodge Col at 3,850m. However, seracs falling from neighboring Mount Shinn started to affect the safety of the approach to the headwall, and ALE decided to change the route. 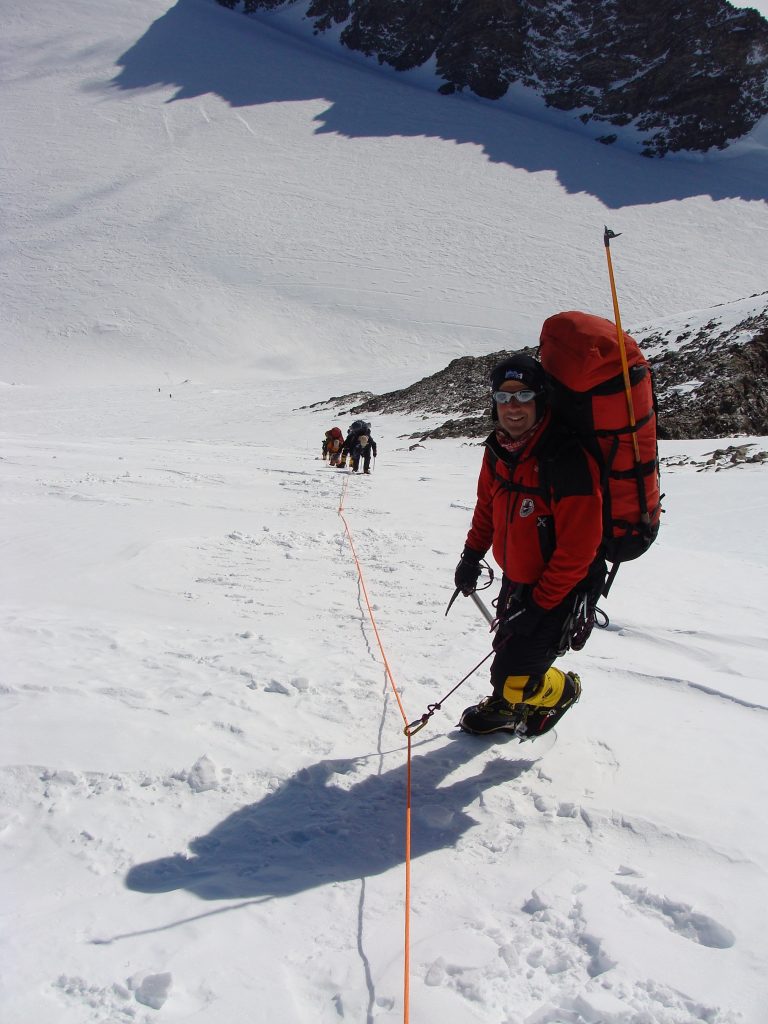 Climbers now edge up a broad snow face, where ALE fixes line to the 3,850m High Camp on a ridge at the top of the face. “The new route is a little steeper and more sustained than the old one,” says Gildea.

It’s wise to have experience cramponing 40-degree slopes with a heavy pack to make this day less draining.

High Camp is quite exposed and can be very windy: “There is a prevailing light wind from the south, but the bad stuff comes from north and northeast,” says Gildea. “From High Camp, you can usually see it coming.”

Most climbers spend two nights at High Camp. Guided groups may do two climbs to the Camp for acclimatization and to ferry gear and supplies. “Everyone underestimates the altitude,” Gildea explains. “Physiologically, the mountain feels higher, thanks to the extreme cold and low-pressure affecting available oxygen levels. People are surprised how long they take on summit day.” 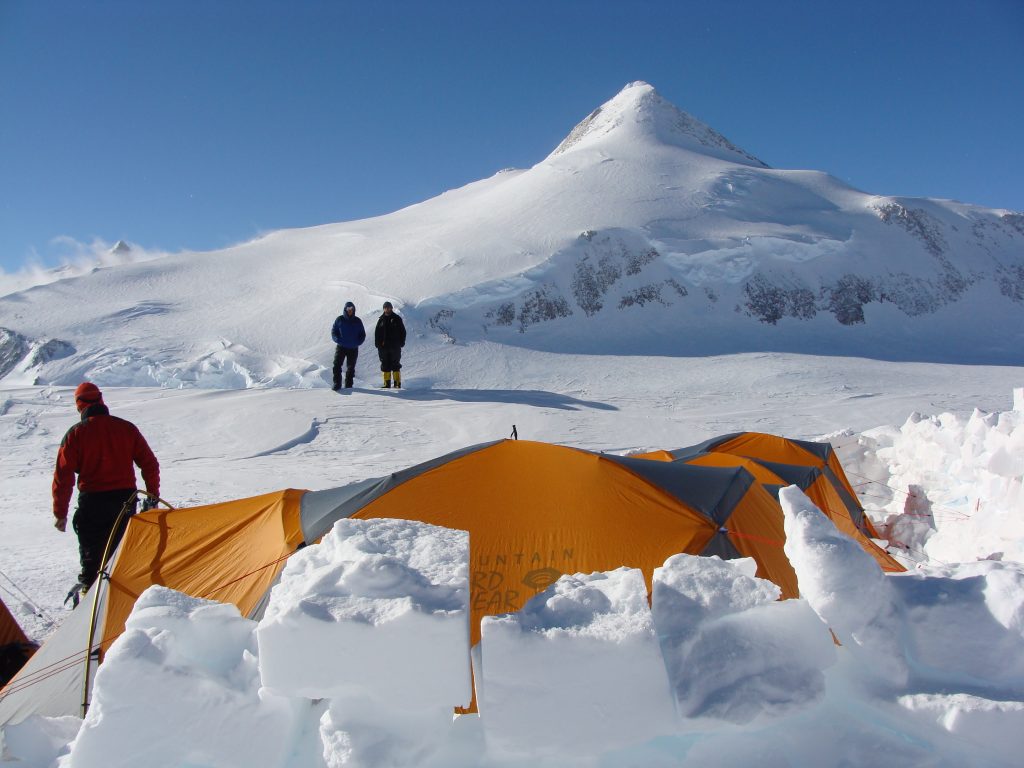 Vinson High Camp with Mt Shinn (4,660m) in the background to the north. Photo: Damien Gildea

On summit day, climbers head southeast up a broad, flat cwm. There are sub-peaks on either side of you, and it can be hard to tell which peak is the true summit. The summit lies roughly seven kilometres horizontally to the southeast. “It’s mostly a very flat, easy day, though it may take 7 to 10 hours, depending on your fitness,” says Gildea. 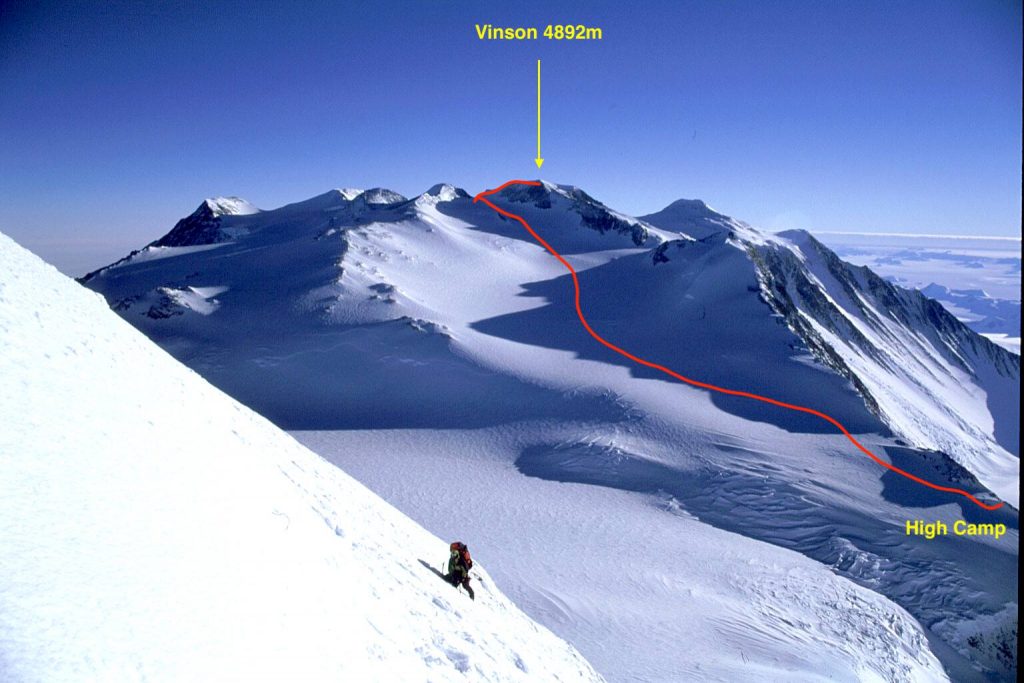 On the final summit pyramid, you can go up ridges on the east or west side. There’s not much difference, but most people elect for the east, which is marginally easier. There is enough space on the summit for several people, and in good weather, there’s no rush to come down.

Up until around 2004, there was a metal cylinder on the summit, wedged into a rock and usually buried by snow. Inside was a notebook and pencil, but only some people found it and signed it. The book was full by 2004, and Gildea returned it to ALE. It now resides with the American Alpine Club, in their Colorado archives.

For over 20 years, there used to be a ski pole marking the summit, widely thought to be Chris Bonington’s from his 1983 ascent. In fact, it was Victor Samsonov’s, from the 1979 second ascent of the mountain. Lots of flags and mementos were tied to it over the years until it disappeared at some point, inevitably taken by someone looking for a souvenir.

When climbers have had their fill of the summit views, they head down to High Camp. The long, flat route down means you can’t go too quickly. It typically takes two to three hours and requires a night at High Camp before descending the rest of the way past Low Camp to Base Camp.

Martin Walsh is a freelance writer and wildlife photographer based in Da Lat, Vietnam.

A history graduate from the University of Nottingham, Martin’s career arc is something of a smörgåsbord. A largely unsuccessful basketball coach in Zimbabwe and the Indian Himalaya, a reluctant business lobbyist in London, and an interior design project manager in Saigon.

He has been fortunate enough to see some of the world. Highlights include tracking tigers on foot in Nepal, white-water rafting the Nile, bumbling his way from London to Istanbul on a bicycle, feeding wild hyenas with his face in Ethiopia, and accidentally interviewing Hezbollah in Lebanon.