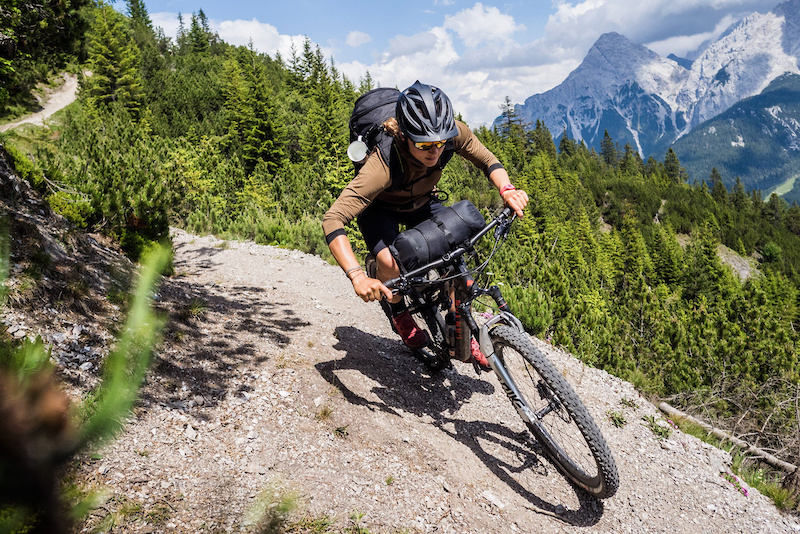 Dring – Dring… I pick up the phone. It’s my adventure buddy Ines Thoma calling. “Hey Kathi, what’s poppin’? I have a great idea in mind. What about a bike packing tour? You, Max and I could pass by Castle Neuschwanstein and ride some sick trails.” ‘Sounds great’ I replied.

“As a real Senderella you should have visited the fairy castle of King Ludwig II. of Bavaria,” Ines explained. ‘I am hooked. I always wanted to visit the famous castle’, I answer and Ines adds: “Alright, we’ll be on the bike for 3 days, so bring a spare panty and don’t pack too much, we’ll do it the simple way and just sleep on the ground under a tarp.“

From the moment I hung up the phone, I realized that I just signed up for a 3-day boot camp aka bikepacking trip with the probably fittest girl of the EWS. So my mind went: ‘Alright – I got it. Stay positive!’

I packed my Trek Fuel EX and a big bag full of survival necessities like energy bars, toothpaste and a sleeping bag. I decided to save weight so I didn’t pack a second and third pair of shammies. Bad idea! Very bad idea, but more of this learning curve later. Ines brought her Canyon along and Max took his Santa Cruz and a whole lot of camera gear.

Now it was time to pack our bags. We took some bags that we attached to the frame plus a big 30 Liter explorer bag. This was our packing list: Sleeping bag and mat, tarp, rain jacket, energy bars, tools, first aid kit and toothbrush. We even found some space for gummy bears, a Bialetti and camera equipment.

Our camp setup of choice could be described as pretty minimalistic: We used the bike as corner posts for our “tent”. How? We flipped the bikes upside down, blocked the brakes with a hair tie and swung the tarp over. As easy as it sounds – it’s great protection against morning dew.

The journey is the destination
Is a saying contributed to Confucius, an old, wise man. And he is right. That’s definitely the right attitude for a bikepacking trip – although some of the steep Allgäu climbs made us question his wise words at times. Just right behind Nesselwang we had to climb up a steep ramp to get to our first stop in Pfronten but we were rewarded with a nice downhill afterwards, so no hard feelings after all.
Day 1 56km / 1540climb /1390 m descent
There were some great trails on the Alpspitze with techy roots that led us down to Kappel. We then climbed up to the Heavenly Kingdom and rode down another trail to reach the campsite in Pfronten.

I woke up early on Day 2. Maybe because of the mosquitoes or maybe because I was too excited to finally visit castle Neuschwanstein. We rode along the river Vils with a short stop on Austria before we climbed up to the Marienbrücke. In 1866, King Ludwig II. built a huge bridge 90 meters above the ground just in front of castle Neuschwanstein. The fairytale look of the castle inspired Mister Walt Disney to create the “Magic Kingdom”. While on vacation in Europe, Walt Disney visited Neuschwanstein and was so amazed by the fairytale-like architecture that he modeled his Cinderella castle after it. He returned home and constructed Disneyland with the castle as its centerpiece. Ines and I were fascinated by the castle. Unfortunately, we couldn’t take a tour through the castle because of the Covid visit restrictions, anyway we had another 43km, 930 climb and 790m descent in front of us. No time for strolling around.

The lunch stop at the Jägeralpe was closed but luckily, Max had brought the Bialetti with him for a quick espresso and cookies stop. On day 1 we finished with a big pizza and on day 2 we planned a nice dinner at the Heiterwanger lake but then we met the young receptionist of the camping site…
“No, sorry, we are fully booked. You need to check with the campsite in Lermoos.” Ines and I went white as a sheet. Lermoos would have been our next day’s stop and it was another 45km by bike. At this point, we had already been on the bike for 43km with one too many climbs in our legs and it was already 6 pm. Ines and I looked at each other. We tried our best puppy eyes and the owner of the camping site mentioned that there might be some space on the tent field. Thank God! The field was completely empty. The caravan campers were quite astonished at how professional our tarp set-up looked like.

Max chose a Santa Cruz 5010 (27,5”; 130mm). Not the classic bike packing bike. But surprisingly fun and playful also with a bit of overload. He pimped the bike with lighter tires and a coffee machine attached to the bike. He was running an Evoc handlebar pack and a frame bag.
Ines chose a Canyon Neuron CF (29”; 130mm). Her favorite all mountain trail bike with Maxxis Exo tires, a longer 140mm RockShox Pike and Topeak frame bags. To run a fairly light backpack, she strapped her sleeping bag on the handlebar. Saddle bags don’t work on full suspension bikes. Especially, if you want to ride technical terrain, as the back wheel would far too easily touch the saddle bag when the seat is lowered.
Kathi chose a Trek Fuel EX (29”, 140mm) She also equipped the bike with some frame bags from Bontrager and Max has borrowed her a big handlebar pack. She was running full SRAM Eagle AXS.

Day 3: From Heiterwanger lake to Lermoos
As I mentioned before, I should have thought about a second shammie. Riding 3 full days in a row in the same bib short was the worst idea ever. Saving weight or not, my ass was sore from all the sweaty salt that’s inevitably in your pants after three days in the saddle. Note: Always bring fresh shammies!

As I tried to follow Max’ and Ines’ pace up to the Tuftlalm I was constantly praying for Kaiserschmarrn. I needed to fill up the glycogen stores. And yes, the hut was open. We were sitting outside in front of the southside of the Zugspitze while eating our Kaiserschmarrn. Well deserved!

I already thought I had reached the goal when Ines and Max wanted to add another 700m of climbing up to the Blindsee Trail. I was already pretty exhausted and asked for the gondola option but as a real bike packer, this was not an alternative. Nevertheless, the 700m of climbing up to Grubigalm did not disappoint.

The Blindsee Trail reminded me of Walt Disney’s Pocahontas. What a view! The bags attached to the frame, especially the bag on the handlebar, made crazy noises and it was not easy to hold on to the handlebar with so much weight in the bags but nonetheless, we were shredding down the trail with a big grin on our face. 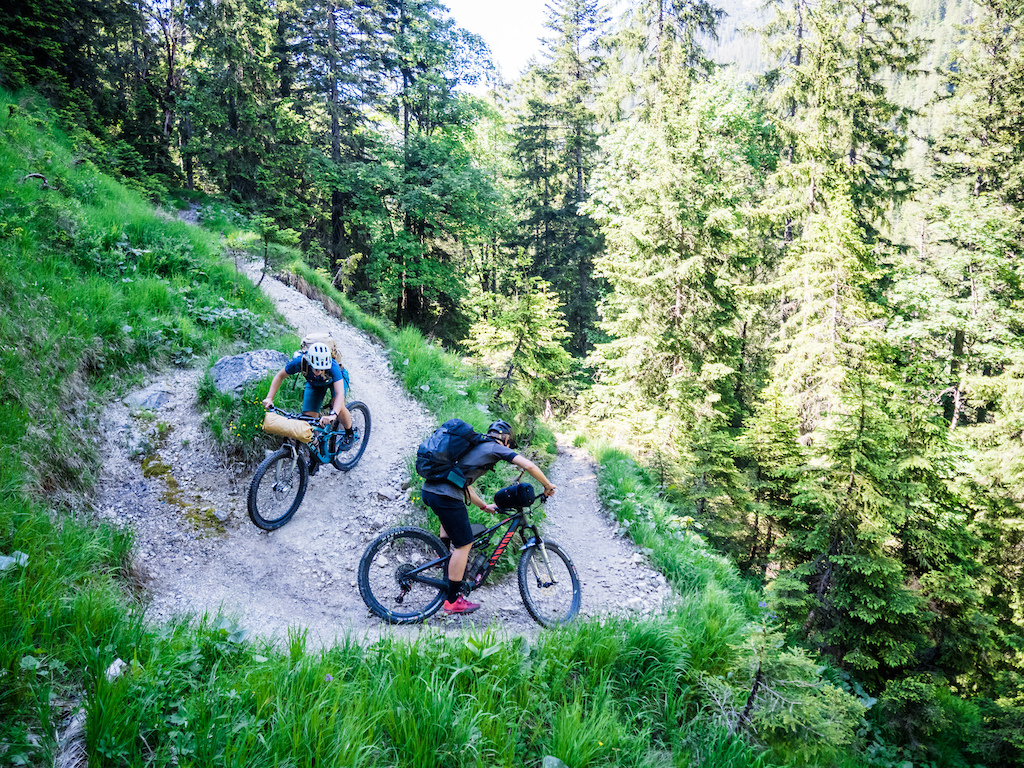 Blindsee Trail delivered and we didn’t miss the opportunity to jump in at the deep end. It was turquoise water, I just had to.

It was around 4 pm when we jumped on the train from Lermoos back to Kempten. We bought the Bayernticket for 39€ (3 people included) and watched the beautiful scenery roll past the train window. 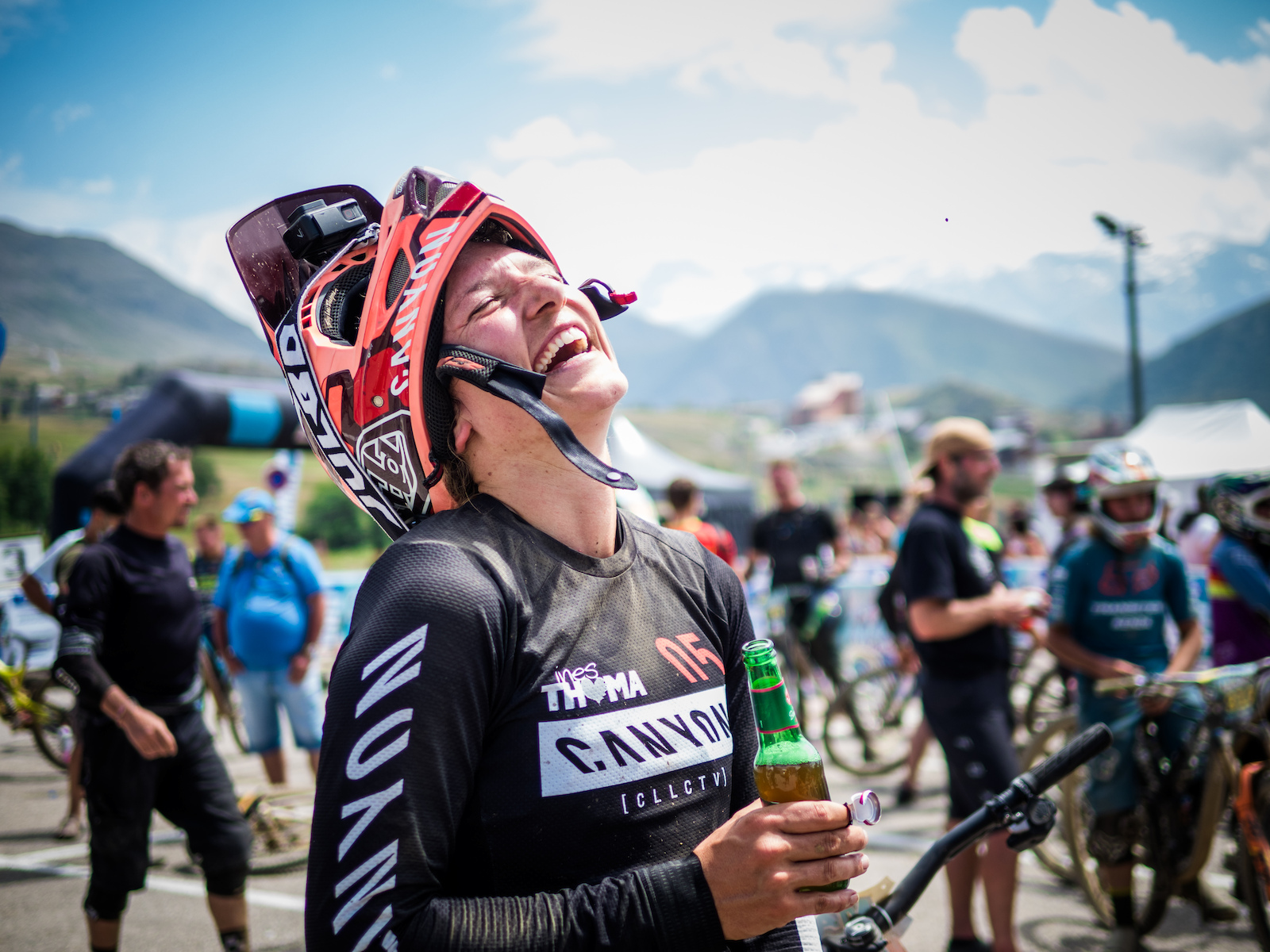 “Haha. I never thought I would be so excited to leave the country only crossing the nearby Austrian border for two days. But after several months of lockdown and staying home we couldn’t wait to pack our stuff and start a great little adventure with friends from home. Already the act of packing was special. The first time trying to fit all kinds of camping gear on a full suspension bike. Definitely less storage space compared to a gravel bike. And we wanted to shred proper trails and stay as light as possible with our gear. The result was great. Beautiful weather, good company, sweet trails and everything so close to home. Bikepacking gives me that feeling of minimalism and adventure and the best thing is, that the feeling starts as soon as you leave the house. Five minutes on the road but already in a different world. Super fun. Makes me dream again.” 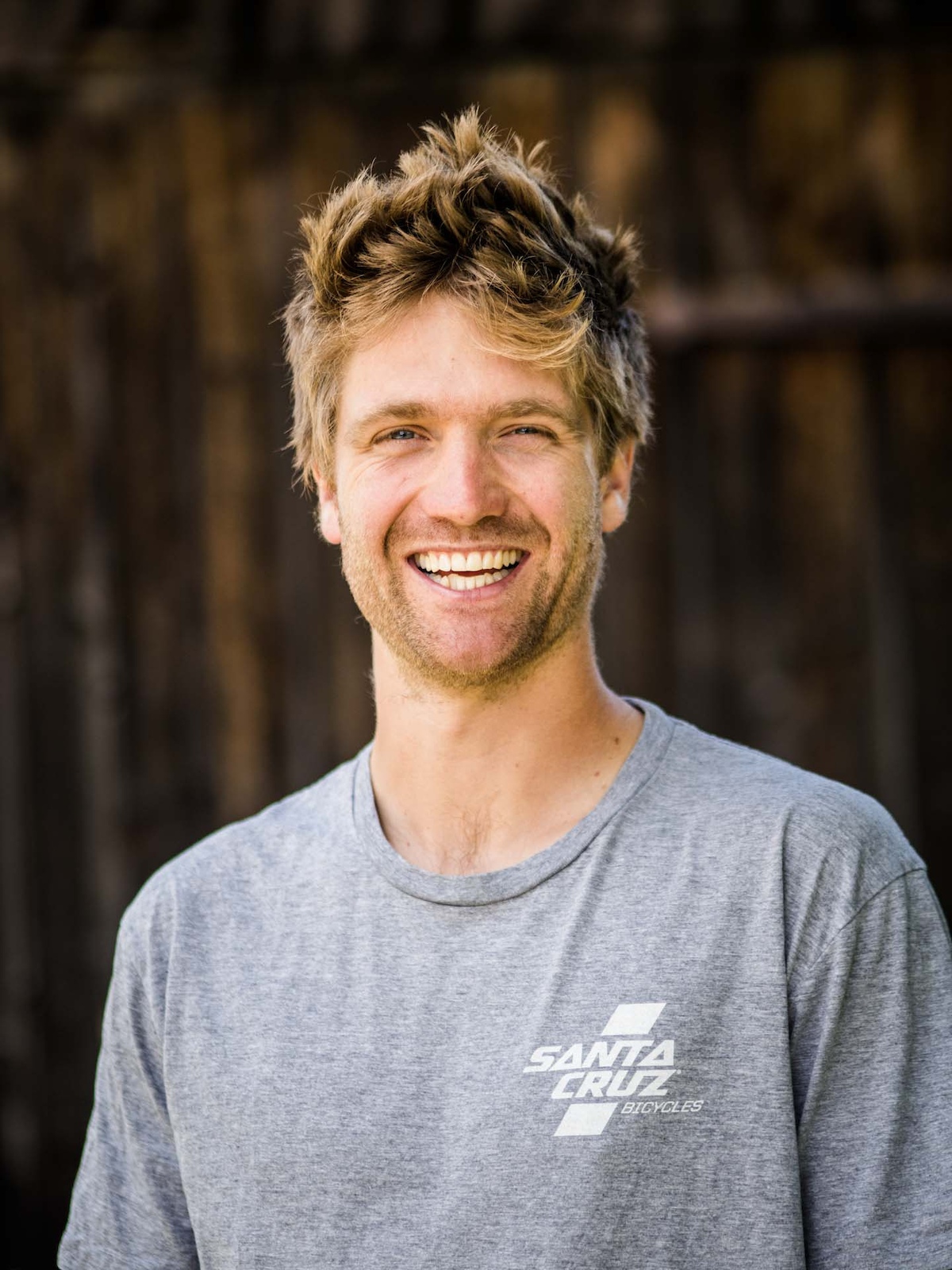 Max Schumann
“Small bikepacking trips are great little escapes. It’s actually pretty funny. Day 2 and 3 on the bike make you reach places and ride trails that you potentially have never seen or considered although they are fairly close to home. But it’s that distance that seems too far away for a day trip and too close for a long weekend. Also going point to point instead of trying to figure out reasonable loops makes for total different trail choices. I like to look at maps and dream about rides. However, this area just across the border to Austria had still been a blank spot. In these weird restricted times it was the perfect mini-adventure to feed our drying traveler souls. 3 days of new trails, of adventure, of being just us with friends, the mountains and our bikes.

On the train home then, Covid life called us back to the new normal: In the moment when the train crossed the border back to Germany – the same train, with the same very few people – we had to put on our face masks again, just because. Wearing the masks, we fell asleep, tired from the 3 days on the bike. Happy. And dreaming about the next small big ride!”