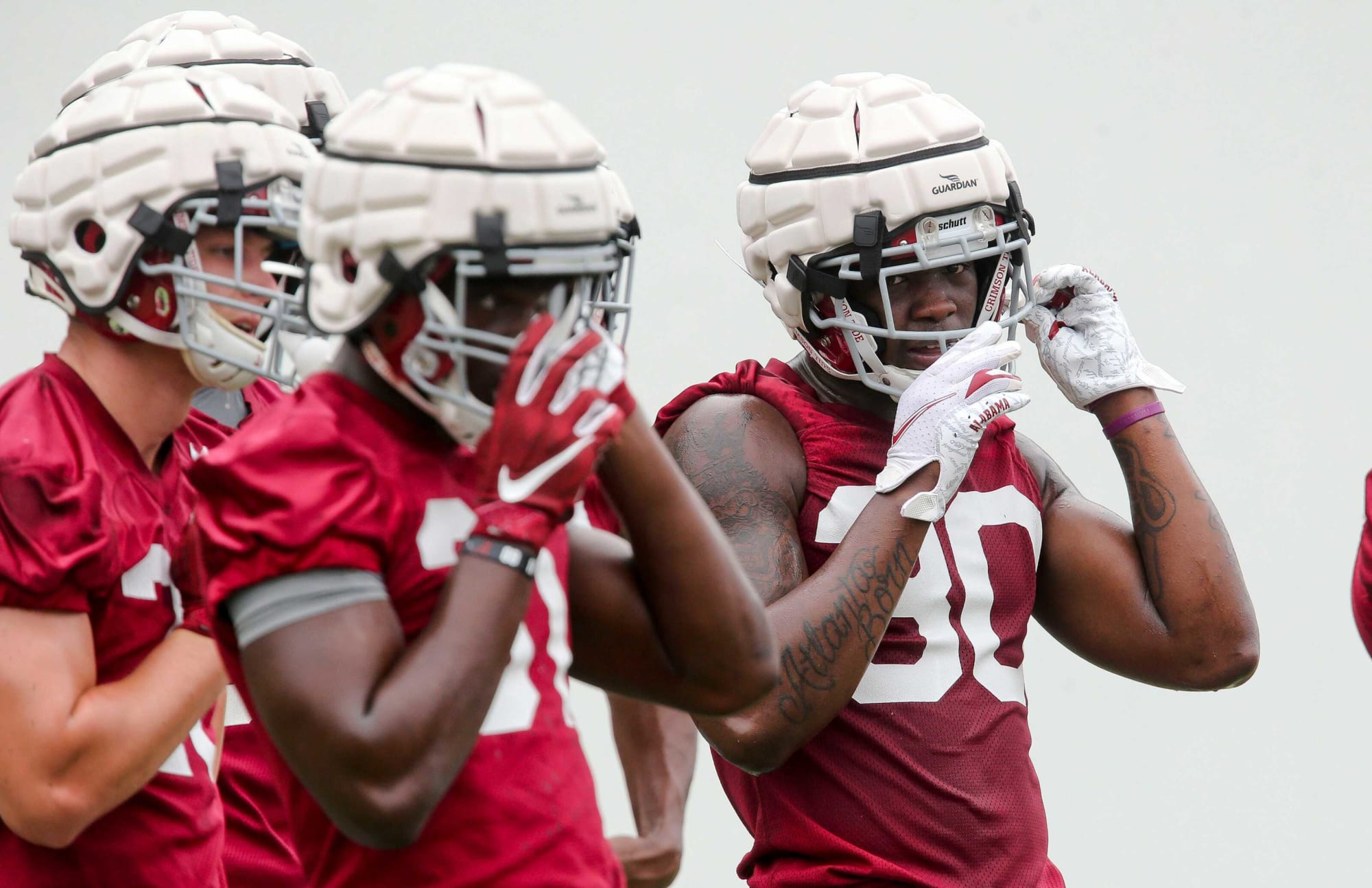 Alabama Football hit the practice field Friday afternoon for its first session of Fall Camp. Under cloudy Tuscaloosa skies, the Alabama Crimson Tide had its first of seven no-pad, acclimation days. One addition to the gear Friday was new, soft exterior padding for helmets.

There was some first-day good news for Crimson Tide fans. Based on a report by Michael Casagrande of al.com, Trey Sanders appears to be ready for full contact. He was not in a black (no-contact) jersey for the Friday session. After missing a season with a broken foot, more recently Sanders had to rehab a surgically repaired hip, injured in a car accident. Sanders was the nation’s No. 1 running back in the 2019 class. So far his college career totals 30 rushes and one pass reception.

Based on the Transfer Portal, plus rumors of an additional transfer and a possible grayshirt, it appears Nick Saban has the roster set at this season’s allowed 87 scholarship players. Multiple media reports confirmed the one Portal player, King Mwikuta is still on the team and took part in Friday’s session. Doubt remains over whether wide receiver, Xavier Williams is, or is not, still on the team.

Alabama football fans, who know some of Mwikuta’s life story, are rooting for King to achieve his football and non-football goals.

Though most Crimson Tide fans need no elaboration, a few have kept asking for confirmation that 5-Star running back signee, Camar Wheaton is indeed a member of the 2021 Crimson Tide. Wheaton practiced Friday afternoon.

Media viewing periods are short and not every player is always out of the locker room before media viewing ends. There was no other injury or injury recovery news from Friday. Crimson Tide fans will have to wait to learn more about Braylen Ingraham, who was injured in the spring.

Thanks to Roger Hoover, Alabama Crimson Tide fans can get a good look at some formidable-looking, Alabama football inside linebackers.

Crimson Tide, Defensive Coordinator, Pete Golding coaches that position group. Golding has at least four potential starters who can be outstanding for the Crimson Tide this fall.

The Alabama Crimson Tide will return to the practice field Saturday for another day of acclimation. Sunday morning, Nick Saban and Alabama Football Coordinators, Pete Golding and Bill O’Brien will be available to the media. Consistent with the Tide’s plan to continue last season’s COVID protocols for six weeks, the media event will be a Zoom session.