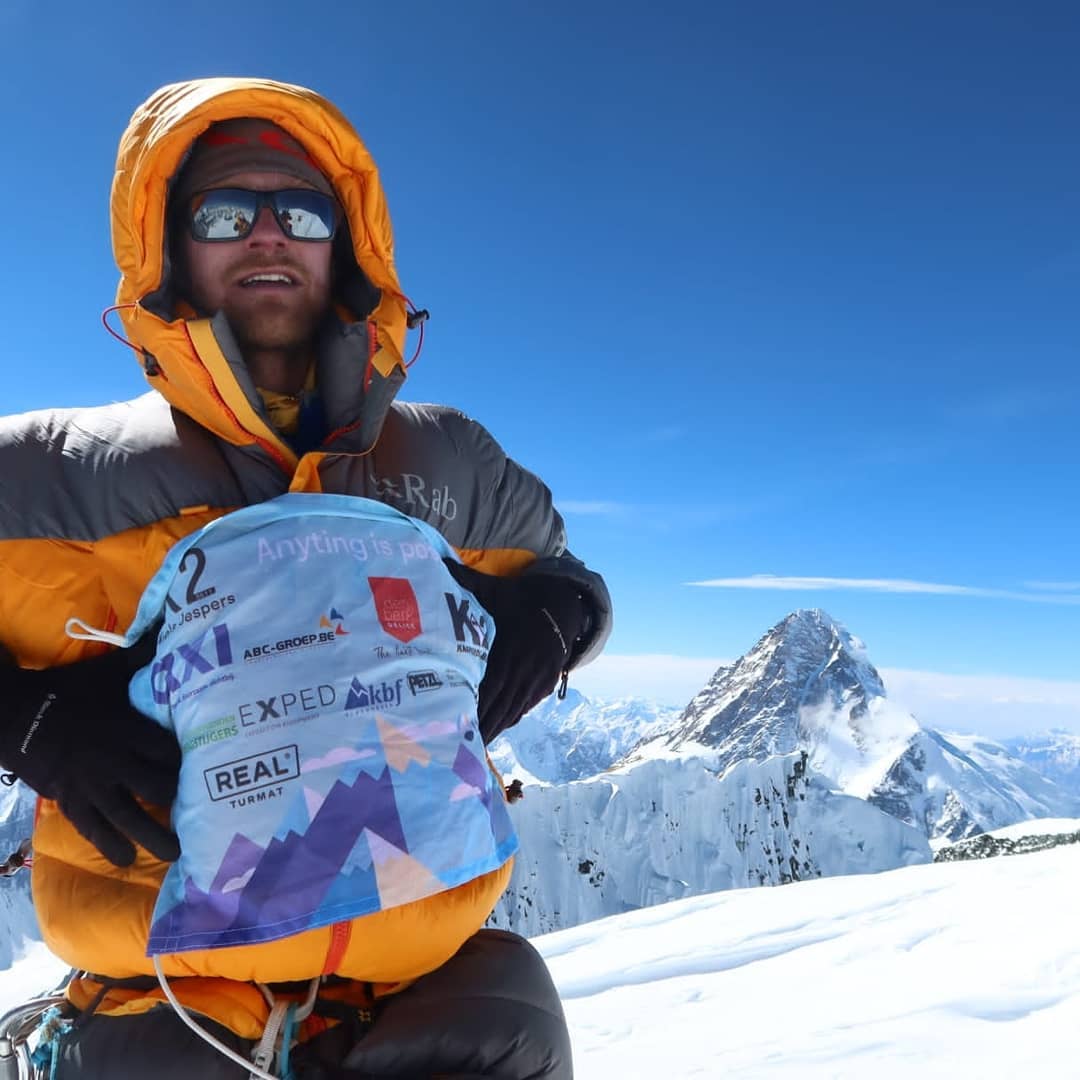 Niels Jespers of Belgium can’t really say how different it is to climb a mountain with supplementary O2 because he has never used it. Considering his recent success doing Broad Peak and K2 back to back, he doesn’t seem to need it.

Jespers summited Broad Peak with Oswald Rodrigo Pereira of Poland and Hugo Ayaviri of Bolivia. A week later, he and Ayaviri launched a summit push on K2. His modest account might make this double-header seem deceptively easy. In fact, the two climbers achieved the only no-O2 summits of K2 this season.

(Note: Ukrainian Dmytro Shemerenko reached the summit without bottled oxygen, but on top, he started to feel sick. He had some O2 shots from his climbing partners’ systems, and he sipped oxygen while descending. So while his climb is not valid as a no-O2 climb, it did bring him down safely without help.)

Let’s start at the end. Tell us about the summit push on K2.

We set off right behind the first group: Pioneer Adventure’s strong Sherpa team, with Sanu Sherpa. He’s one of the best! But at Camp 3, we were not sure if there would be a successful summit push. We decided to wait there for another 12 hours, instead of risk getting stuck at Camp 4. 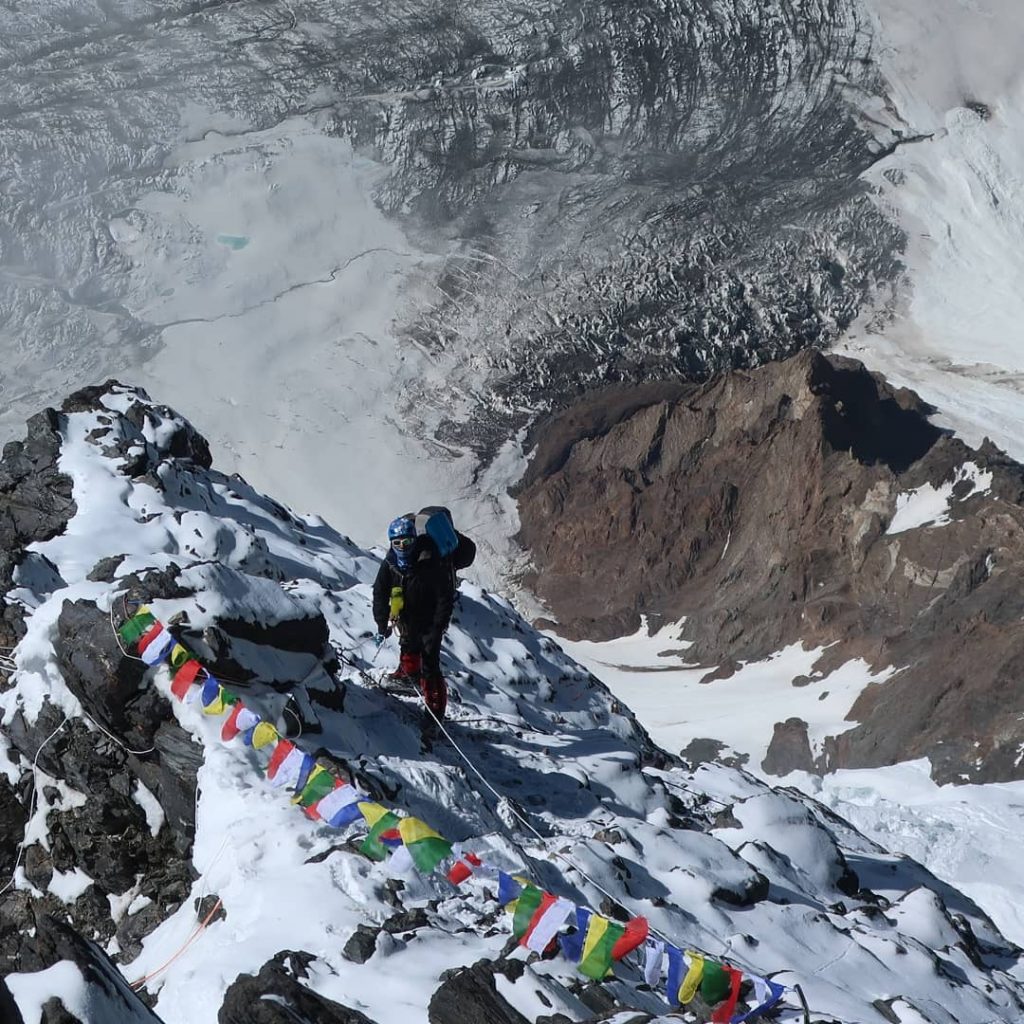 Niels Jespers during the K2 climb.

So after the “Pioneers” reached the summit, we moved to Camp 4. We were aiming to summit a day later, like Madison’s group. We left at 10 pm, breaking a bit of new trail because blowing snow had partly filled in the old path.

They caught up to us so quickly!

About three hours later, we saw lights below, indicating that the climbers were preparing to leave. Once they set off, they caught us so quickly! We let them pass, amazed at how fast and how differently they moved on oxygen. I mean, they just go up, while we were controlling every move, every step, not to lose a grain of energy or breathe too fast. But it was good for us because they broke a perfect trail. In the end, we needed 11 hours to summit while they made it in around 7 hours.

What was it like climbing up the Bottleneck and traversing under the Great Serac?

Well, I had heard many stories, but, honestly, the Sherpas had fixed the ropes and the group ahead of us had left a nice, snowy trail, so it was really just walking up. Of course, there is that huge, scary serac over your head. You don’t want to look up. You try to forget about it. 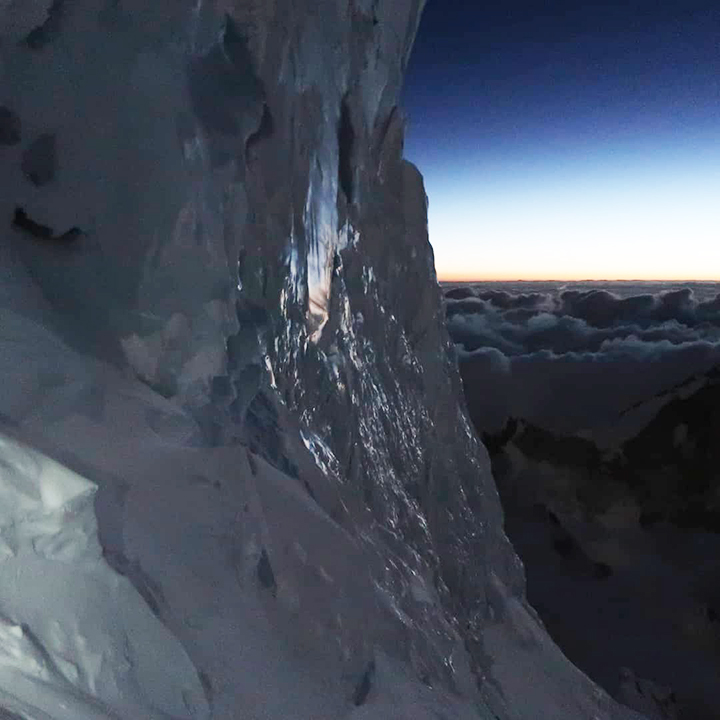 Dawn breaks at the Great Serac.

But what I didn’t expect was the steep and very icy terrain after the traverse. But again, the traffic ahead helped us, because they had left little holes for the crampons. Still, it was hard.

During the climb, did you ever consider turning around?

Well, after this steep section I just mentioned, the last 200 (vertical) metres are the hardest. We were really tired, and mainly what went through my mind was, “Ok, is what I’m doing here safe?”

My friend Hugo was going faster than I, I felt like I was about to faint, and I couldn’t help thinking, “F**k, if something happens now, you’re gone.” It was a bad moment, but then I recalled how long I had had this mountain in my mind, the total support of friends and family, and the mental preparation that I had developed for years. It all eventually came together.

We were the last two people to reach the summit. It was 9 am. 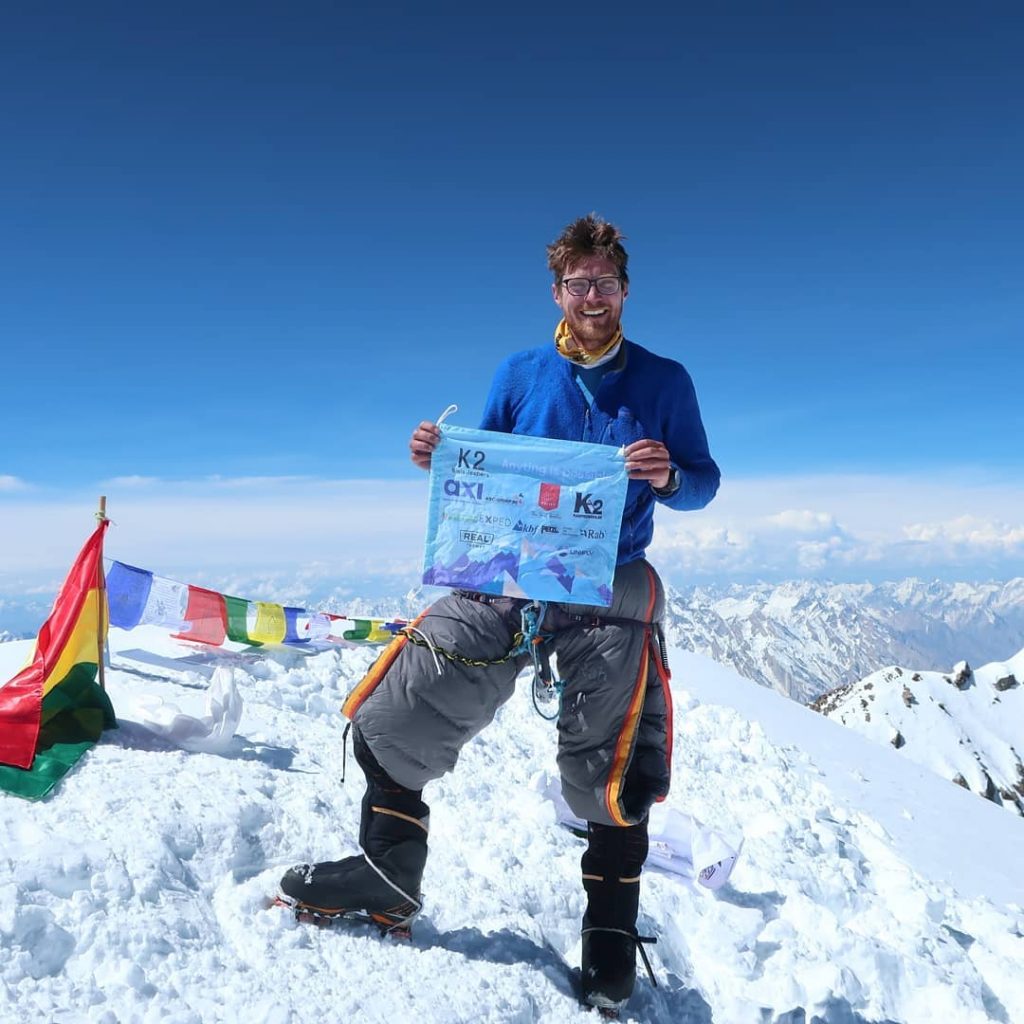 Jespers on the summit of K2, on an extraordinarily mild morning.

How about the descent?

We knew we had to make it all the way back to Camp 3, since C4 was only suitable for a short break to rehydrate.

No one was with Sajid

On the way down, we met Sajid Sadpara. We were the last men on the mountain, and it was getting dark. To my surprise, Sajid was completely alone, trying to move the bodies. No one on his team was with him. We started to help. We attached the rope to Ali’s body and pushed it down toward the Bottleneck, but we were not sure how much further down Sajid intended to carry it. Concerned about getting down safely, I continued down. Hugo somehow found the motivation to remain with Sajid.

Did you know Hugo Ayaviri before the expedition?

No. We met in Base Camp, but it was a perfect match. I had lived for a year in Bolivia, I knew the country and the people, so we got along really well. Also, we climbed at a similar pace, which we discovered on Broad Peak. My own climbing partner was not feeling well, so it was providential. 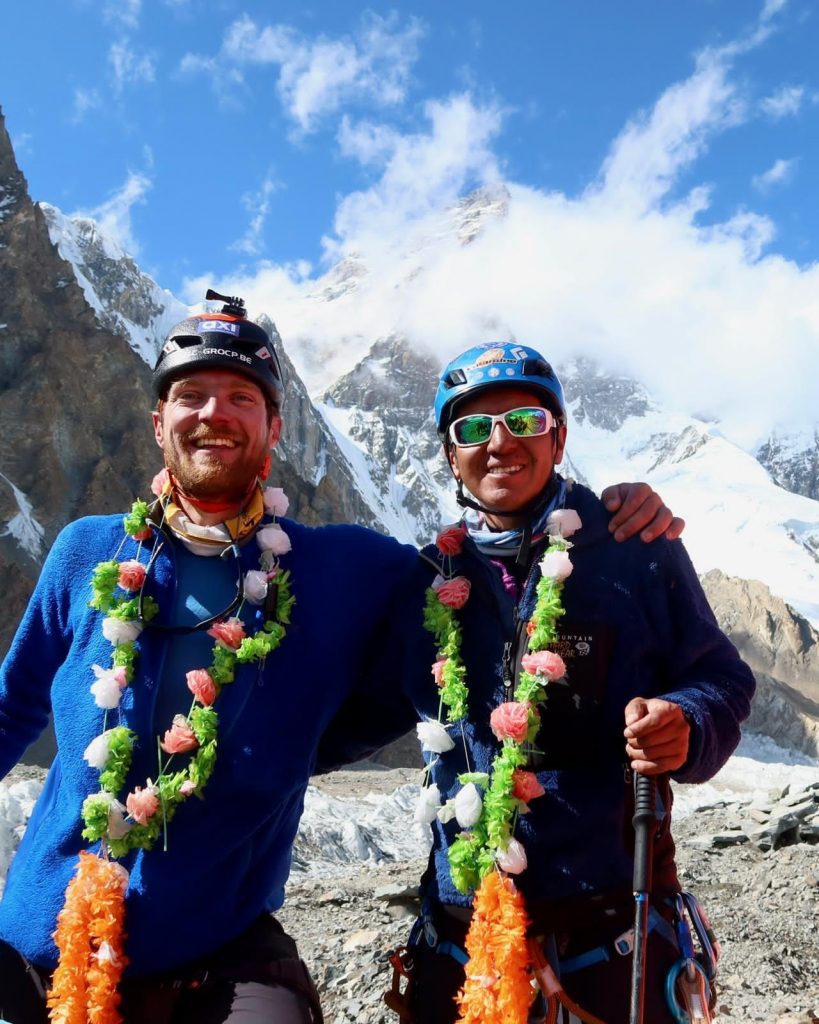 Niels Jespers and Hugo Ayaviri in K2 Base Camp.

Maybe you two could team up for some future expedition?

Well, I don’t have plans for further expeditions. After doing these for years, I’d now like to focus on something more technical in the Alps or the Caucasus.

K2 was a dream since I was a kid. Eventually, after I summited Nanga Parbat, I started considering it a realistic goal. I attempted the peak two years ago but had to retreat with a frozen toe. That’s why this year I was so conscious of the need for very good acclimatization before going for the summit, and the reason I asked for a permit for Broad Peak as well.

Now that I have made it, I am done, and I want to climb with my friends. Maybe I would consider some expedition to a lower mountain, but otherwise, I want to spend my time ski touring, rock and ice climbing in the Alps, those kind of things.

If you had found no fixed ropes and no broken trail on K2, would you still have tried?

Yes. In fact, we carried a rope in the backpack for just that situation. But we would have had little chance without a broken trail. Then, we were also lucky with the weather, both on Broad Peak and K2.

This was a difficult season in Pakistan because of COVID. After last spring in Nepal especially, there was a lot of uncertainty. What kind of atmosphere did Base Camp have?

Well, I found very motivated people. After all the problems to get there, they really had their goals clear. At the same time, I was surprised that nearly no one else considered climbing without oxygen. For myself, I’d rather not summit than use supplementary O2, and I thought that was the norm, but it was not. Everybody else was using O2, even from Camp 2, which is crazy, in my opinion. Then, of course, it is a question of money. When I heard how much these fully serviced clients had paid, boy, I almost fell off the mountain! 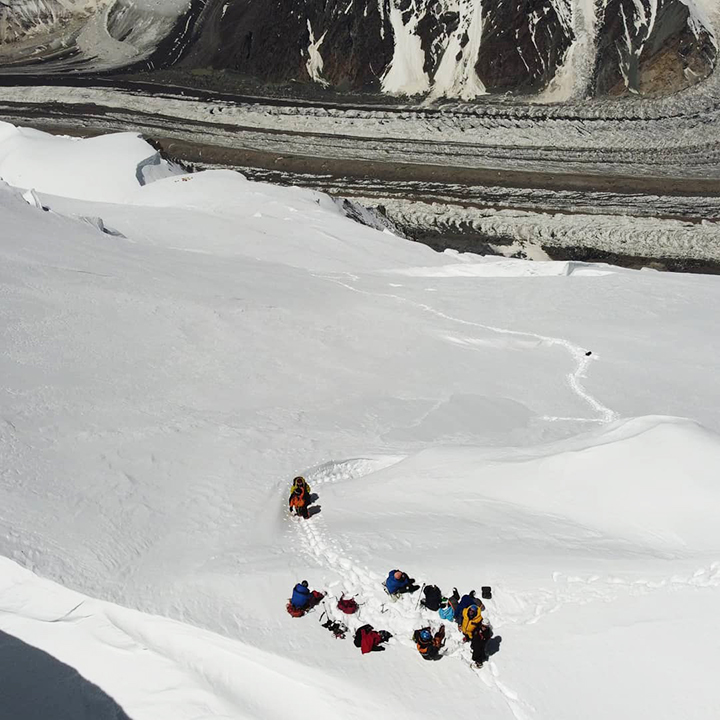 You mentioned that you went to Broad Peak just to acclimatize for K2. Yet you, Ayaviri, and Oswald Pereira made the only no-O2 summits there as well. And Broad Peak did not have fixed ropes or tamped-down trails, right?

Yeah, it took two days to climb Broad Peak. On the first day, the three of us (together with the rope-fixing team) reached 7,700m through deep snow. Some of us tried to push on after the rope fixers stopped because we thought that it was then or never. But the snow was too deep. After an hour or so, we all turned around. Some had had enough then.

But a few of us thought that we could rest for a day in Camp 3, then give it another try.  There were three of us, Lotta, Nastya, and five Pakistani climbers. Then we heard of a big group of about 30 also heading up the next day. They left around 8 to 9 pm, but we needed more rest and left at 2 am. In the end, Lotta decided to go down.

We arrived at the previous day’s point. A little above, we were surprised to see a long line of climbers, waiting for the rope-fixing team. We were glad that we had had the extra rest! We waited for about an hour and started again slowly, in a queue, to the col.

But then, at the col, people sat down again, waiting. I thought, “God, we don’t have time for this.” Oswald, Hugo, and I agreed that we would pass the rope-fixing team and climb without ropes. So we did. That pumped up our motivation. We reached the rope team, took the one rope they had left, fixed it ourselves, and proceeded.

Then came the long traverse to the summit ridge. It was getting late and sometimes there was loads of snow. We used some old ropes or none. At one point, I thought, that’s it, I’ve had enough. But each time one of us considered turning around, someone motivated the others to go on. We finally reached the last ridge to the main summit, which was surprisingly easy, to our huge relief.

On the way, we passed Nastya and Mr. Kim

We summited at 3.30 pm. It was already late, so by 4 pm, we were heading down. On the way, we passed Nastya, a little later we passed Mr. Kim, with at least one porter. Finally, we saw two or three of the Pakistani rope fixers. And that’s about it. I was surprised when I read a post by Mirza Ali claiming that eight members of his team had summited. But who can tell? It’s difficult to recognize people in full gear and O2 systems and to remember things at altitude. 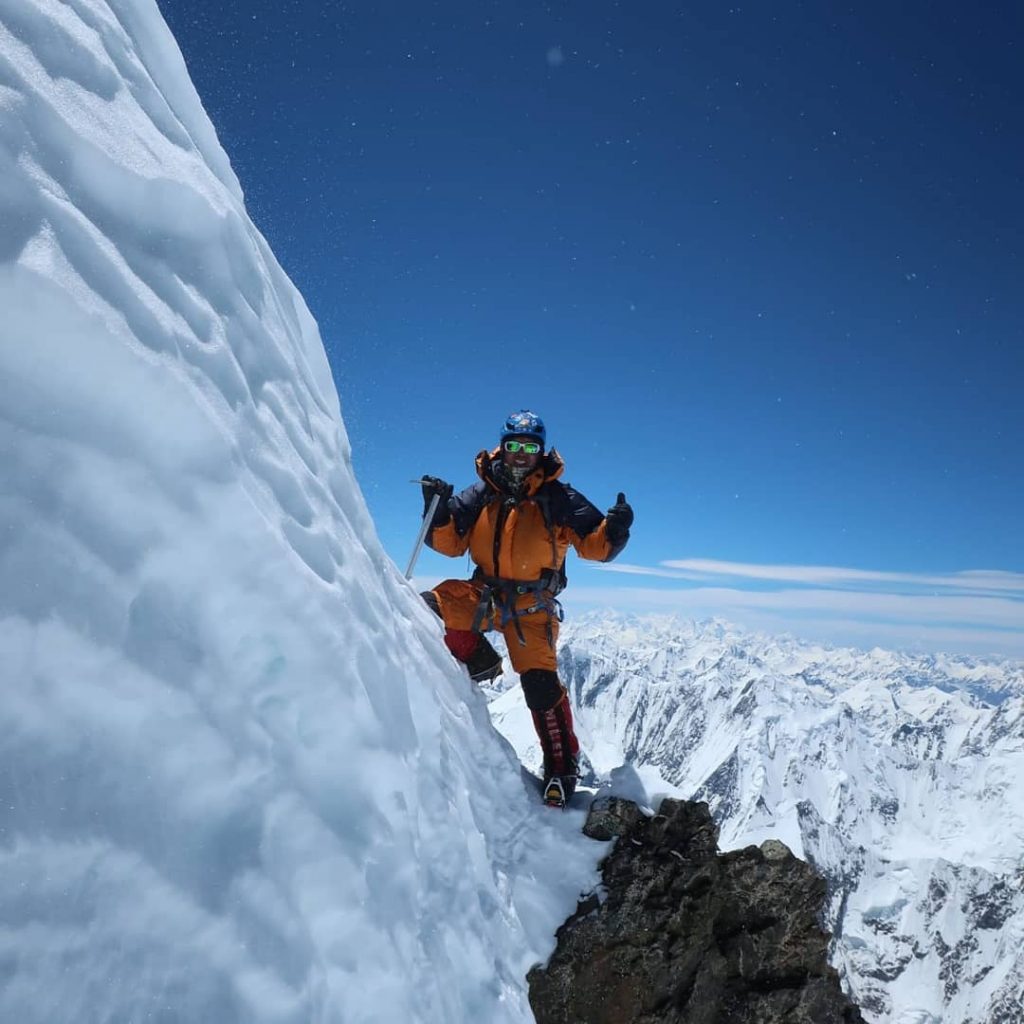 The three of us reached the col around the same time. I continued straight for Camp 3. Five minutes later, Oswald got a message from Nastya asking him to wait for her. By then, I was lower down. In fact, I reached Camp 3, collapsed there, and found out about the terrible events the following morning. We accompanied Nastya and took her backpack from Camp 3 to Camp 2 because she was descending very slowly. We retrieved our gear from Camp 2 and continued to Base Camp.