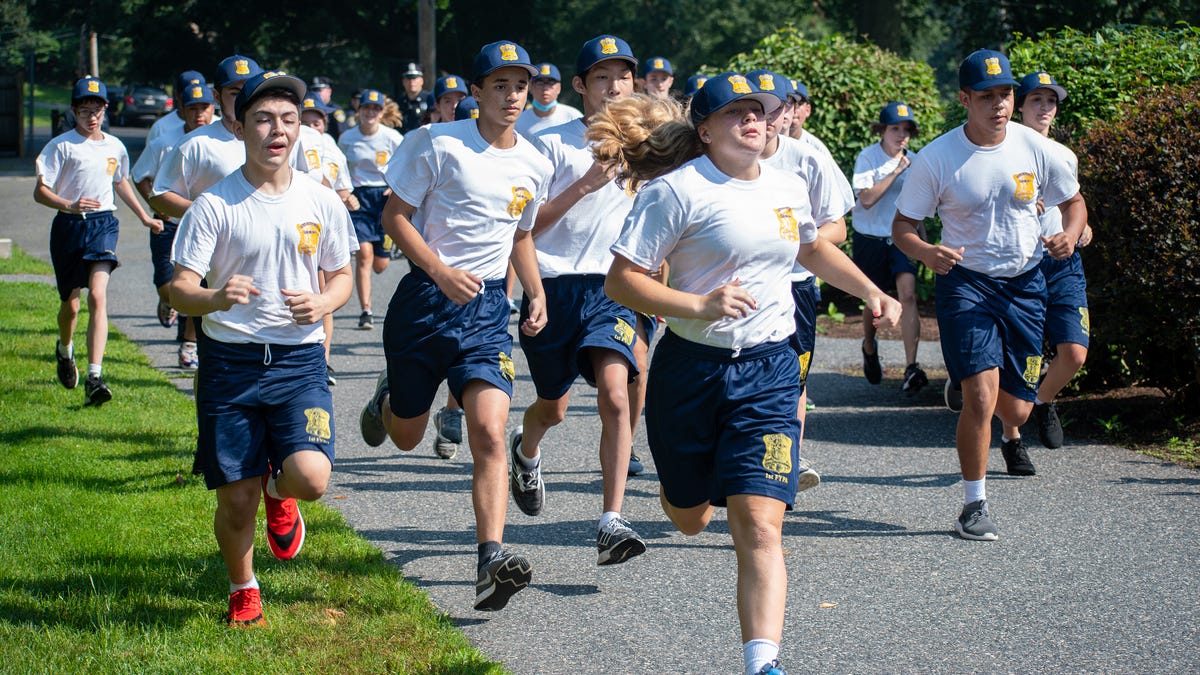 FRAMINGHAM — Through sweat, toil and brains, 28 teens learned about teamwork and discipline this week at the first Framingham Youth Police Academy.

“I’m really liking this camp because it’s giving me an opportunity to express myself and maybe show who I am,” said Kaylee Faulkner, a 15-year-old rising sophomore at Framingham High School who heard about the academy from her parents.

The five-day program ran from 8 a.m. to 4 p.m. — or 08:00 to 16:00 — every day this week and ended with a graduation for the group of 14- to 17-year-olds. Upon graduation, all students became CPR-certified. Many activities took place at Loring Ice Arena in Framingham.

“I like working with people my age,” Faulkner said. “Sometimes I’m shy, so it’s hard for me to meet people — friends — but this camp made an opportunity to make friends, so I’m grateful for that.”

Sgt. Jay Ball, the academy’s coordinator, said the program is modeled off a similar offering in Marlborough. Ball said the camp is an opportunity for young people to get a bit of a taste of what a police academy would be like, and that the program is also a form of community outreach. He said officers were also there to listen to what students had to say.

“We want them not only to get to know the police, but understand what we do and why we do it,” Ball said. “We’re part of the community also. We don’t want to be separate. We work for the city of Framingham and its citizens.”

Anderson Guavara, 17, a rising junior at Framingham High who works as a landscaper and hopes to start a business, said he wasn’t initially very interested and didn’t have a great opinion of police before attending the academy.

“I have changed completely. I went home wanting to come back tomorrow,” he said. “I was able to get to know them better and I see that they’re just normal people, just like me.”

During a K9 unit demonstration with the Ashland Police dog, Ajax, students sat in a cluster on the grass outside Loring Arena, listening to an officer describe how the German shepherd is used for police work. Although the students were scattered on the grass, they were recognizable by the blue shorts, white T-shirts and caps they wore and the water bottles they carried, all part of the free program.

Ball said that everyone wearing the same uniform as their peers instills discipline and makes everyone feel like they’re part of a cohesive group.

“They have a feeling of pride and being a team together and wearing the same uniform,” he said. “It gives them a sense of accomplishment and belonging.”

Ball said the program would not have been possible without many different departments and individuals contributing, including the state police, Framingham Fire Department and National Guard, as well as the Framingham Parks and Recreation Department and the high school.

Besides physical training and marching, the teens were also suited up in scuba gear, got to see a K9 dog at work and watch firefighters take a car apart to rescue a mannequin. There was also a helicopter visit Thursday from the Mass. State Police Airwing.

“Everybody works like a team,” Guavara said. “If somebody is having trouble, we’re cheering them up so they can get back on their feet.”

Ball said they’re hoping to offer the academy again next year and said he hoped students were proud of being the first class to graduate from it.