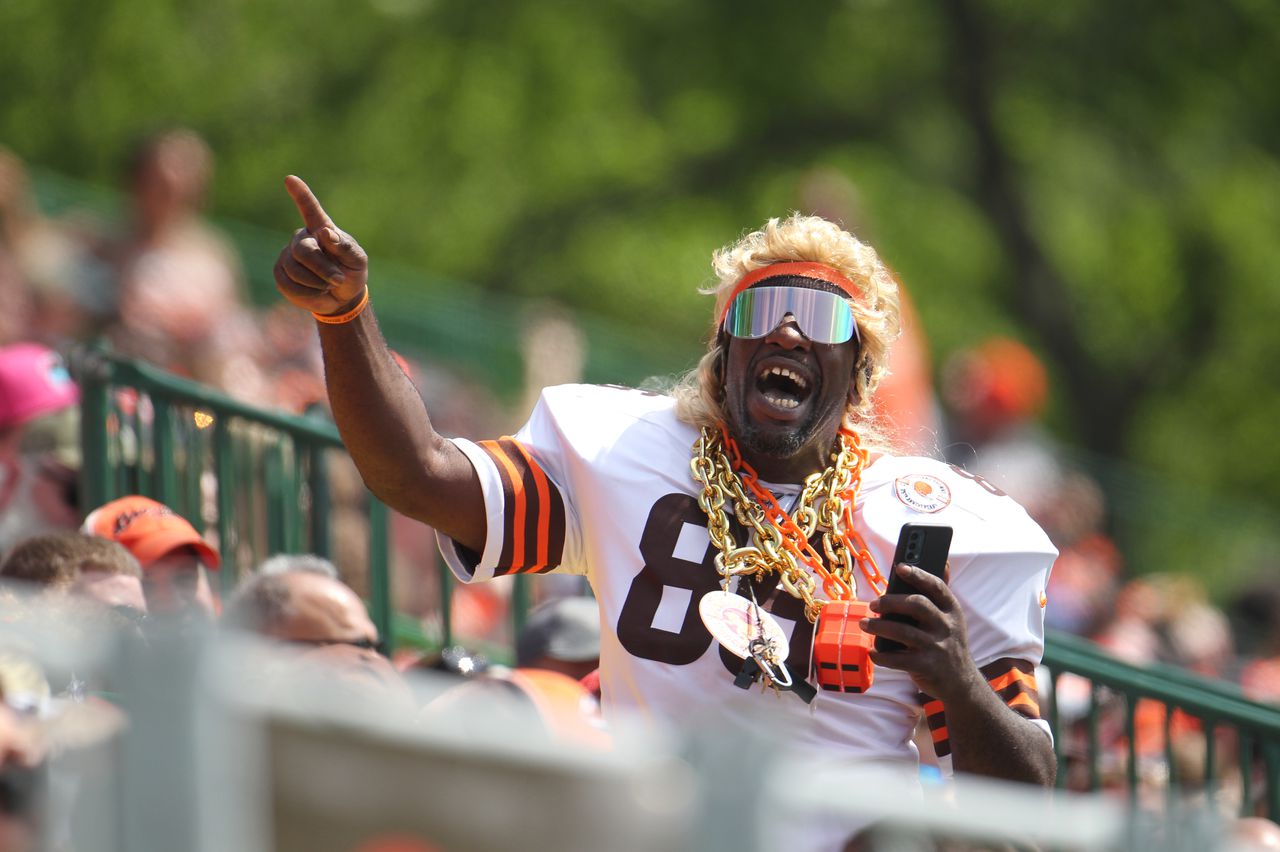 BEREA, Ohio — The big news of the day was that the fans were back out at the Browns facility for training camp for the first time since 2019, about 2,000 of them.

There was plenty of barking, a lot of “Here we Brownies’’ and fans decked out in some wild Browns garb.

With the players not able to sign autographs or pose for photos, some, including Greg Newsome II and Myles Garrett, shared gear with fans. Garrett drew loud cheers from the crowd when he tossed a glove into the stands.

“Yeah, it’s fun,’’ coach Kevin Stefanski said before practice. “I think there will definitely be some juice out here for the guys. I know the players will enjoy it. They enjoy being applauded (laughter). There certainly will be an element to that. I am excited to see it. First time for me. I have been part of training camps where we have the fans in there, and I can just tell you that the oohs and the ahs, the players definitely feed off of it.”

Here are some other things that happened on Day 3.

1. GM Andrew Berry spoke, but had no extension updates

Berry made his annual training camp address before practice, but he had no updates on extensions for Baker Mayfield, Denzel Ward, Nick Chubb, Wyatt Teller or Harrison.

“I think you guys know at this point that with contracts and personal situations I do not think this is the most appropriate setting,’’ he said. “In regards to Baker, a good player, an even better person. Can’t have enough people in our locker room who embody those two characteristics on our team.”

Berry did reveal that “one hundred percent of our coaches and support staff are vaccinated, and over 90 percent of our players are fully vaccinated or are finishing out the last phases of the process. We are excited to be out here and get going over the next couple of weeks as we prepare for the season.”

“Bob is someone who I have had a lot of respect for through the past few years really since his time as director of pro for the Patriots, and obviously with his time in Detroit,’’ Berry said. “The former general manager’s perspective is one that I very much value. We’ve had (senior football advisor) Ryan (Grigson) here twice, and he has been an incredible resource for me.

“With Bob, everything that he’s done across football operations and everything he’s seen in the general manager’s seat with Detroit, I just really value his expertise because the reality of it is, yes, I have been a year on the job, but there are still some things that are new situations or things that are going to be new to me in the next few years. To have someone and to have multiple people now who can provide a little bit of a roadmap in that regard proves to be incredibly valuable.”

3. Ward bulks up, works on his ball skills

Ward had added about seven pounds of muscle, has been eating better and doing other things to elevate his game. Ward, who’s due for an extension, has also missed three or four games in each of his three seasons with soft tissue injuries, and he’s trying to avoid that this year.

“He really is in a good spot physically,’’ Stefanski said. “I think that is a credit to Denzel obviously, first and foremost, but it is a credit to the strength staff to (director of performance nutrition) Katy (Meassick) our nutritionist. They had a plan, and he has really stuck to it.”

Harrison, who’s working with the first team, walked off the field gingerly with a trainer after tweaking a hamstring. The Browns will err on the side of caution, so it won’t be surprising if Harrison misses at least a day or two.

He wasn’t the only one who walked inside with a trainer. Defensive end Takk McKinley left with an illness. The Browns are being extra cautious with illnesses because of COVID-19. Two players ill Thursday were back Friday in cornerback Troy Hill and Richard LeCounte III.

Harrison’s absence meant more reps for safeties such as LeCounte and Sheldrick Redwine, but with Grant Delpit (Achilles) on a pretty strict snap count, the Browns can ill afford to lose Harrison.

Mayfield overthrew some of his receivers early, but he settled down and threw TD passes to Donovon Peoples Jones, Alexander Hollins and Ja’Marcus Bradley. Odell Beckham Jr. and Jarvis Landry didn’t do much in team drills and Rashard Higgins is mostly resting his rolled ankle, so younger players got plenty of reps.

Perhaps Mayfield had some extra adrenalin going with fans cheering for him at practice for the first time since 2019.

The Browns aren’t even in pads until Tuesday, so not much can be read into these practices.

6. Kareem Hunt gets to shine

Fans didn’t get a chance to see Nick Chubb because it was his day to rest, but got a heavy dose of Hunt, who ran the ball a lot and caught a number of short Mayfield passes. There aren’t enough footballs to go around, but Hunt has a nose for the end zone, catching five TDs among his 38 catches last year. If there’s any way to throw the ball to him more, especially in the red zone, they should do it.

7. Donovan Peoples-Jones the “it’’ receiver

Peoples-Jones is getting a lot of love this camp with Landry and Beckham getting some 11-on-11s off, and Higgins rolling his ankle. Peoples-Jones caught a deep TD from Mayfield to the delight of the crowd.

“A really smart player, a conscientious kid who we could put in there and trust him to do the job. He certainly earned our trust over the course of time,’’ Stefanski said.

Get the latest Browns merchandise: Here’s where you can order Cleveland Browns gear online, including jerseys, T-shirts, hoodies, hats and much more.

Browns go deep and a closer look at the DBs: Day 3 walkoff thoughts

Reactions to Day 3 of camp: Orange and Brown Talk

Berry: Over 90% of players have started vaccination process

OBJ, Higgins back on the field: Stefanski quick hits on Day 3

Mayfield, leading an offense he knows, says he can play better than 2020

Watch Landry and Mayfield talk it out then execute

Mayfield, leading an offense he knows, says he can play better than 2020

Reactions to Day 2 of camp: Orange and Brown Talk