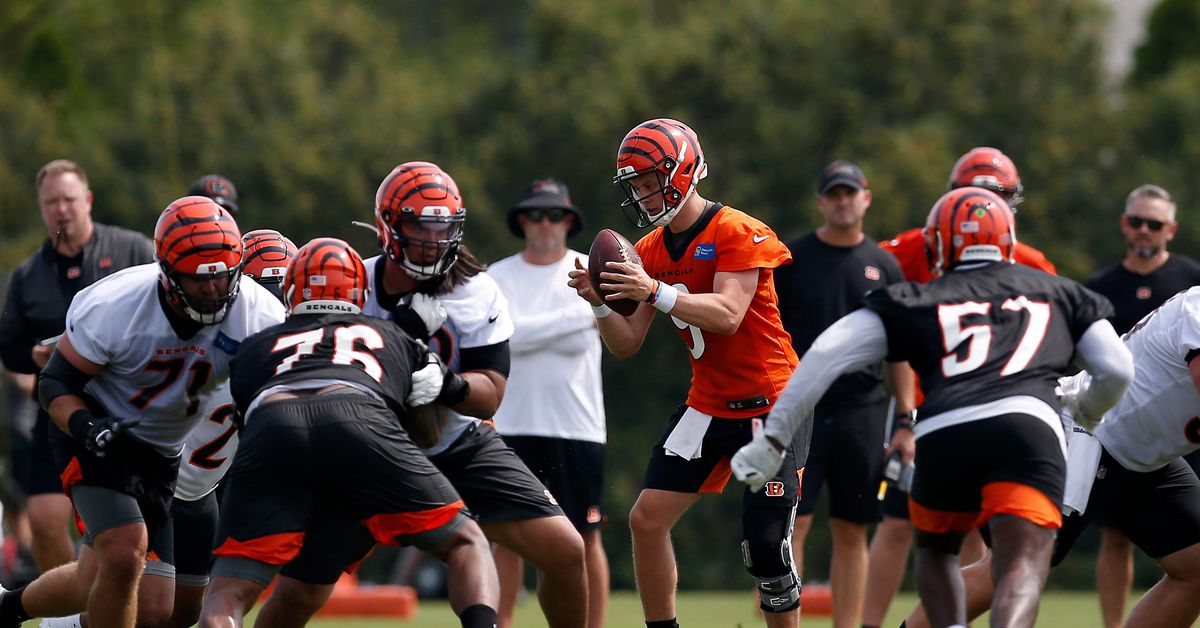 Football returned to the shores of the Ohio River Wednesday as the Cincinnati Bengals opened up training camp.

As is tradition, not much happened on the first practice back from the players’ Summer break, but that doesn’t matter. The Bengals are gearing up for the preseason after COVID-19 took it away last year. Here’s what we found out on their first day back.

Joe Burrow had his first in-person press conference a few hours before practice ensued. Now eight months removed from his knee injury, Burrow faced a flurry of questions regarding his recovery and getting back into the swing of things. He mentioned that he’s “just about” 100% recovered and he doesn’t plan on changing his playing style to get re-acclimated.

“I’m just going to play the way that I play,” Burrow said. “I’m excited to see how it feels and see if I can still make those plays that I did.”

This will be the biggest aspect to watch for when Burrow returns to the field. He’ll be participating fully during practices for the next month, but he won’t face real in-game pressure until September 12th’s Week 1 matchup against the Minnesota Vikings.

Luckily, there isn’t any pressure during seven-on-seven work, in which Burrow looked sharp during.

He made throws all over the field to a good variety of receivers.

The 24-year old quarterback said he’ll continue to do rehab work throughout camp and the preseason as well. The road to 100% is nearing completion.

Returns and battles up front

Not all ACL tears are the same, evidenced by Trey Hopkins’ own immaculate recovery back to the field. Hopkins is less than seven full months since his injury and got full clearance to return this week, but Zac Taylor said that Hopkins won’t partake in 11-on-11 work for the first couple practices as a way to ease him in.

As one of the returning veterans to the offensive line, Hopkins knows the last two years were far from good enough. But the former college free agent has faith in new offensive line coach Frank Pollack to turn the unit around.

Next to Hopkins at right guard may very well be rookie Jackson Carman. The second-round pick from this year’s NFL Draft is making the transition from left tackle to right guard, but the position is not his just yet. Taylor implied that neither guard spot is solidified at the moment, but there’s clear hope for Carman to seize a spot.

Larry Ogunjobi was placed on the Active/Physically Unable to Perform list Wednesday morning due to a minor hamstring injury. Taylor said the injury occurred on Tuesday, and that Ogunjobi can be classified as day-to-day.

Missed time is not ideal, and hamstring injuries have a certain stigma for Bengals fans, but this is good news for Ogunjobi. In all likelihood, he’ll be back on the field when practice starts to ramp up.

Aside from Ogunjobi and Hopkins, every other projected starter was out practicing in full.

It’s safe to say Evan McPherson’s camp got started on the right foot, literally. The rookie kicker went six-for-six at the conclusion of practice.

We knew McPherson had enough power to beat out incumbent Austin Siebert, but if his accuracy holds this well for the next month, there simply won’t be any need to see Siebert on the field. This is McPherson’s job to lose.

5. Rookie kicker Evan McPherson went 6 for 6 on field goal attempts at the end of practice, ranging from 30 to 48 yards. Appears to have effortless power. Kicks sail way over the goal post pic.twitter.com/oUguh6h73T