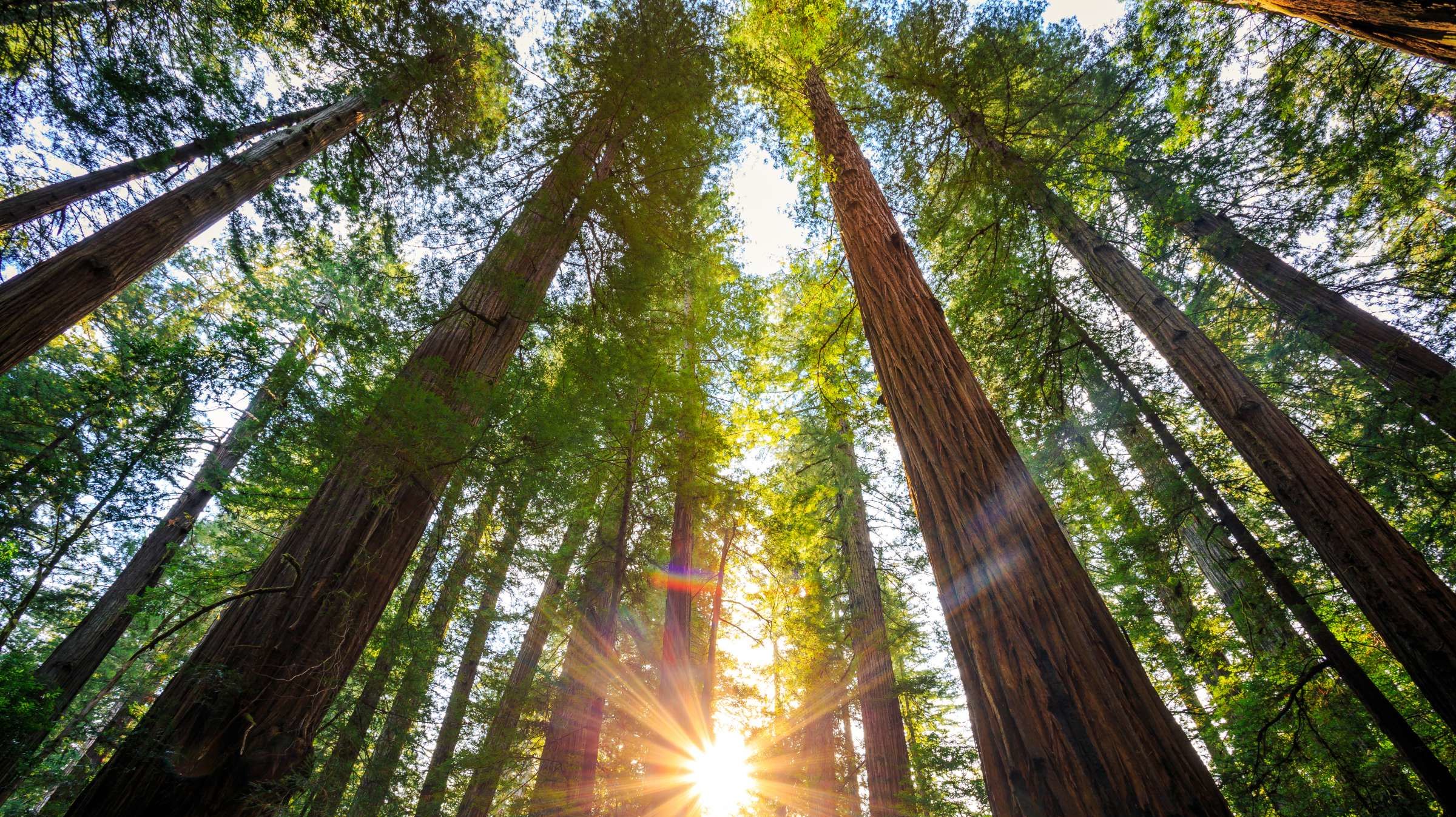 From the ground, the world’s tallest tree is easy to overlook: It has the same thick, craggy bark as the thousands of other coast redwoods towering over the temperate, fog-blanketed forests of Northern California, and it grows the same needle-like foliage. To truly understand what makes the tree exceptional, you would need to scale its trunk, as one botanist did in 2006. After lowering a measuring tape from the tallest leaf, you would learn that the tree—known as Hyperion—stands over 380 feet. That makes it nearly 75 feet taller than the Statue of Liberty.

But when hikers pass beneath Hyperion, they may have no idea that they’re standing in the shadow of the tallest living organism, and one of the most famous trees, on Earth. Hyperion isn’t marked on any maps, and the Redwood State and National Parks keep its exact location in the Redwood Creek basin hidden from the public. That’s because despite its formidable size, Hyperion is vulnerable.

“When a globally superlative thing is discovered, people want to go see it,” Richard Campbell, director of restoration for the Save the Redwoods League, tells Mental Floss [PDF]. “And people want to go take photos of it, and put it on Instagram, and climb all over it, and carve their initials into it.” Foot traffic can trample the tree’s understory and compact the soil around the roots. Too many visitors could jeopardize the health of the 600-year-old behemoth.

Historically, coast redwoods’ superlative nature has been one of the biggest threats to their survival. From the 1850s to the 1960s, more than 90 percent of California’s original redwood trees were logged for their valuable timber. Hyperion escaped that era, but hiding its location may not be enough to get it through the next century. Just as the forests are beginning to recover, more intense fires and other stressors aggravated by climate change threaten their progress. Now, conservationists are hoping they can use redwoods’ natural charisma to the species’ advantage.

As the tallest trees in existence, coast redwoods have specific needs. In order to grow up to two to three feet per year, they require constant hydration. So even in areas with high levels of rainfall, the trees rely on a back-up moisture source in case of dry spells—like thick fog generated by the ocean, which keeps redwood forests damp all year long.

Only a few places on Earth meet these criteria. Today, the coast redwood’s natural range is limited to a 450-mile-long, 5- to 35-mile-wide strip of coastline running through Northern California to Southern Oregon.

Redwoods were once much more abundant in the region. Their numbers began to decline starting in the mid-19th century, when white settlers flooded the area hoping to profit off the California gold rush. New towns popped up practically overnight, and there was a sudden need for materials to construct buildings and furniture. The mighty redwoods covering the land became a primary lumber source. Loggers that felled the trees found wood that was beautiful and lightweight, yet stronger than its close relative, the giant sequoia. The same qualities that allowed redwoods to grow so large and live so long—like decay-resistant tannins and fire resistance from low resin—made their lumber highly desirable. Their size was another selling point. The trees often exceed 300 feet in height and grow 18 feet wide, adding up to a lot of product.

Coast redwoods are still considered to be one of the most valuable species in the lumber industry. And though Native American people on the coast built homes and canoes from redwood planks prior to colonists’ arrival, they mainly harvested their material from fallen trees and encouraged new forest growth. The destruction that began in 1850 was unprecedented.

From the beginning, redwood loggers faced opposition. California’s majestic giants were unlike anything growing out east, and conservationists were moved to protect them. The San Francisco Daily Chronicle sounded the alarm bell in 1854, writing, “Soon the whole neighborhood will be cleared of growing timber. Already the fairest and largest trees have fallen before fire, ax, and saw. Those magnificent pillars, which form so strange a crown to the mountains when seen from San Francisco and the bay, are slowly disappearing.”

Passion for California’s redwoods—including the giant sequoia as well as the coast redwood—helped kick off a larger conservation movement in the U.S. President Abraham Lincoln signed the Yosemite Grant Act in 1864, bestowing Yosemite Valley and the Mariposa Big Tree Grove to the state of California and thus establishing the nation’s first state-controlled park. Sixteen years later, Sequoia National Park become the first national park in California and the second in the country.

Such legislation was able to save only a minority of the state’s oldest redwoods. Improvements in logging technology in the early 20th century posed the greatest threat yet. Following World War II, California saw a housing boom, and the lumber industry raced to keep up with demand. Every year throughout the 1950s, redwoods were logged at three times the rate of any year prior to that decade. The decimation of the redwood forests wouldn’t start to decline until the mid-1970s, and by that point, the vast majority of the old-growth trees had already been felled.

Conservationists have spent years working to recover the forests, but planting new trees isn’t a miracle solution. Trees that grow slowly over centuries are bigger, healthier, and capable of storing more carbon, making them essential components of the environment. “The old coast redwood forest has the ability to sequester and store more carbon than any place on land, pretty much,” Campbell says. “And the trees along the coast, especially up in Redwood State Park area, are sort of the epitome of that. They have the highest biomass of any forest. The most biomass of any tree.”

Many of the old-growth redwoods that remain on the coast owe their survival to the expansion of Redwood National Park in 1978. That includes Hyperion, which narrowly avoided destruction in the last century.

On Top of the World

After spending the summer of 2006 exploring a remote area of Redwood National Park, naturalists Chris Atkins and Michael Taylor stumbled upon a new candidate for world’s tallest tree [PDF], growing on a steep slope. Less than two months earlier, they had discovered Helios and Icarus, which measured 376 feet and 371 feet tall, respectively; both trees beat the previous record holder, Stratosphere Giant in Humboldt Redwoods State Park.

This new coast redwood had the potential to best them all.

After finding the tree—which they dubbed Hyperion after the Titan father of Helios in Greek mythology—they contacted botanist Steve Sillett of Humboldt State University in California. Sillett, considered the authority on coast redwoods, was the first scientist to climb the old-growth trees, beginning in 1987, and study the vibrant ecosystems in their canopies.

Upon arriving at the tree, he helped the researchers measure it using a laser rangefinder. Initial calculations put it at 378 feet—which would have made it the tallest tree by a comfortable margin. But laser rangefinders aren’t always accurate. The tools use laser pulses to estimate the distances between the viewer and the top and base of the tree. Calculating the angles produced by the distances results in a decent estimate of the tree’s height, but with measurements this important, Sillett wanted to be sure. He gathered his ropes and mechanical ascenders and started his climb.

Dropping a fiberglass tape from the top of the tree showed that their estimates were low: Hyperion was 379.1 feet tall—three feet taller than the next tallest tree standing not far from there. (It’s grown more than a foot since 2006.) The find was also remarkable for another reason. Hyperion is located in the Redwood Creek basin, which only became protected land relatively recently. Lumber workers cleared wide swaths of the forest in the 1970s. In 1978, President Jimmy Carter made the basin government property with the Redwood National Park expansion act. The legislation came at a lucky time for Hyperion and its fellow giants in the area. From the tree, Sillett could see where loggers had clearcut part of the forest, and he estimated that Hyperion had probably been less than two weeks away from suffering the same fate.

The superlative tree is also young, at least compared to other old-growth redwoods. Experts have placed its age between 600 and 800 years; the oldest coast redwood is more than 2500 years old. Speaking to The New Yorker in 2006, Sillett said Hyperion “could get to 390 feet in our lifetime.”

To have a shot at another 600 years of survival, the tree needs protection. That’s why Redwood State and National Parks have never shared its location with the public. But that doesn’t mean its whereabouts are top-secret; there are guides giving unofficial tours through the remote area to the famous tree. The rigorous hike may prevent the site from ever becoming a full-blown tourist attraction, but as the climate crisis worsens, foot traffic may become the least of Hyperion’s problems.

Forest for the Trees

Forest fires have always been part of the coast redwood’s ecology, but the new breed of fire fueled by climate change presents a unique threat. California saw an unprecedented wildfire season in 2020, and by mid-October, 4.25 million acres of land had burned. That included 81,000 acres of coast redwoods, 11,000 of which were old-growth.

The changing climate has intensified droughts and heat waves in California, and more dry brush and dead wood have accumulated on the forest floor as a result. This, combined with poor forest management, produces unusually powerful fires.

Prior to the 19th century, Native Americans periodically lit controlled fires in the redwood forests to clear the underbrush and make room for new plants to grow. When white settlers arrived in the area, they stopped forest fires from spreading whenever possible and allowed plant debris to build up. Fire suppression is considered a primary culprit behind the devastating forest fires of the modern era.

Even with thick, fire-resistant bark, some coast redwoods aren’t able to survive such intense blazes. Trees that do survive may lose their crowns and take years to regrow them, disrupting entire ecosystems in the meantime. Beyond fires, climate change threatens the moisture the redwoods depend on to thrive. As temperatures rise, life-giving fog evaporates from the coastal forests. Research published in 2010 showed that the average length of time that fog covered the forest decreased by more than three hours over the previous century. It’s unclear if this trend will continue as global warming becomes more severe, and if so, how—and if—coast redwoods will adapt.

In the fight for survival, coast redwoods have something that many vulnerable species lack. Campbell says the tree’s popularity can help raise awareness around their conservation, and the conservation of trees in general. “I sort of think of them as the panda bear of trees,” he says, “the way that panda bears have become a global icon for wildlife conservation. I would like to see redwoods be the same for forests and for plants.”

That charisma is what drives some people to hike through the wilderness to see Hyperion in person: They’re amazed that such an organism can exist, and they want to bear witness to it. But nature-lovers don’t need to stand beneath the tallest redwood to appreciate the majesty of the species. Every old-growth tree on the California coast is worth saving, and by leaving Hyperion off its map, Redwood National Park has emphasized that.

“I’m not being trite—it’s easy to miss the forest for the trees, right? If you’re just looking for that extra-tall one in a forest with already 350-foot-tall trees, you’re just trying to find the one that’s a wee bit bigger,” Campbell says. “The forest itself is what the national park protects, and the whole forest is magnificent.”