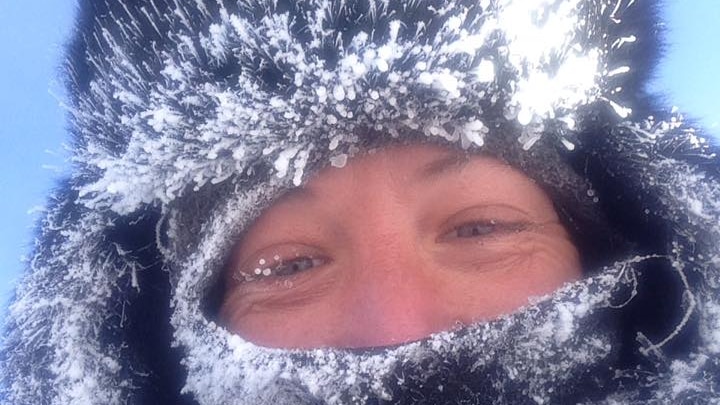 When Angela Maxwell needed a break from her busy life, she decided to take a walk. She wouldn’t return for six and half years.

Seven years ago, Maxwell was a successful life coach in her 30s with her own business consultancy in Oregon in the US, but she felt an overwhelming sense of dissatisfaction.

“There was still this sense of climbing through this rat race…to make more money in the six figures,” she told ABC RN’s Life Matters.

She decided to change her life and that an adventure was the way to do it.

“I had this idea that I could go walking around the world on a budget [and that] maybe I could give back in some way,” she says.

So, Maxwell became a globe-trotting adventurer, trekking around the world in service to this quest.

During her travels, she raised money for Her Future Coalition, an organisation dedicated to helping survivors of gender violence in India and Nepal. She did speaking engagements, used social media and attached a sign to her cart with her website, where people could donate.

She also wanted to test herself.

“One of the things that I was drawn to with this walk was to really find out what I was capable of,” Maxwell says.

There were many opportunities for that along the way.

“I didn’t always have help, and I had to really go within myself to find those resources. And oftentimes that came to having a mindset that would help me carry on and get through the difficult times,” she says.

It took Maxwell nine months to prepare for her walk. She had no prior hiking experience, so she read the memoirs of female adventurers, researched camping gear and went on long hikes. To fund the trip, she sold most of her belongings.

There was a certain urgency to her desire to get away. “When I knew I wanted to set out on a long pilgrimage, as crazy as it seemed…it was a now or never decision,” recalls Maxwell, who was inspired by Jane Goodall, Amelia Earhart and Sacagawea.

She set off on 2 May 2014, leaving her hometown on foot. Essential items were packed in a rickshaw pram, which she would pull along on her journey.

Over the next six and half years, her 20,000-kilometre trip would take her to four continents, 14 countries and a handful of islands.

She says there were countless highlights, including helping a farmer renovate his home and being handed old family recipes in Italy, learning beekeeping in the Republic of Georgia, and camel herding in Mongolia.

She lived on just five dollars a day, which meant she camped most of the time and carried her own food and water. She ate rudimentary meals like oatmeal in the morning and quick noodles at night. Every now and then, she’d pick up a soft drink and a chocolate bar if she found them while passing through a small village.

Occasionally, she’d receive an unusual treat. “In Mongolia, a family slaughtered and cooked a sheep and offered me the delicacy, which was the sheep cheek, paired with a slice of pure fat,” she recalls.

“I could never refuse being offered something. Not once [did] I ever.”

Apart from her family walking the first 11 kilometres with her, Maxwell walked alone, which she says as a self-confessed introvert was often the best part.

“One of the things I loved about the walk was the solitude. That’s one of the reasons that I loved Western Australia so much, is that I could go days and if I really wanted, weeks without seeing another person,” she says.

Maxwell knew there would also be challenges. She came down with dengue fever in Vietnam, which took a month of recovery. She got sun blisters and heat stroke in the Australian outback, and her feet took a beating.

But the worst moment came about a year into her journey, when she was in Mongolia. She was sexually assaulted one evening while she slept.

“A nomad came into my tent in the middle of the night…it was terrifying,” she says.

She knew it was a make-or-break moment, in which she could either return home or keep walking.

“The one thing that helped me to keep going, was that I thought about all the women who had shared their stories before,” she says.

It was a difficult decision for Maxwell, but she forged on, ever alert whenever she slept. For the remainder of her journey there were no issues – and no regrets.

Maxwell’s must-haves for exploring the world on foot:

On 16 December 2020, Maxwell returned home. She’s still adjusting, because while her hometown hasn’t changed much, she definitely has.

“It’s a bit surreal being back in the place I left almost seven years ago,” she admits, “[but] it also reminds me that home isn’t a place as much as it is where you feel comforted and safe.”

Maxwell says her journey was profoundly life-changing. She feels the woman who left in 2014 has come back with her old identity stripped away. She is now ready to start a new chapter.

“I feel like I’m just starting a new adventure and I think that’s something that we can all hold on to,” she says.

“We never really know what’s lying around the corner. And so ultimately, life truly is an adventure if we let it be.”