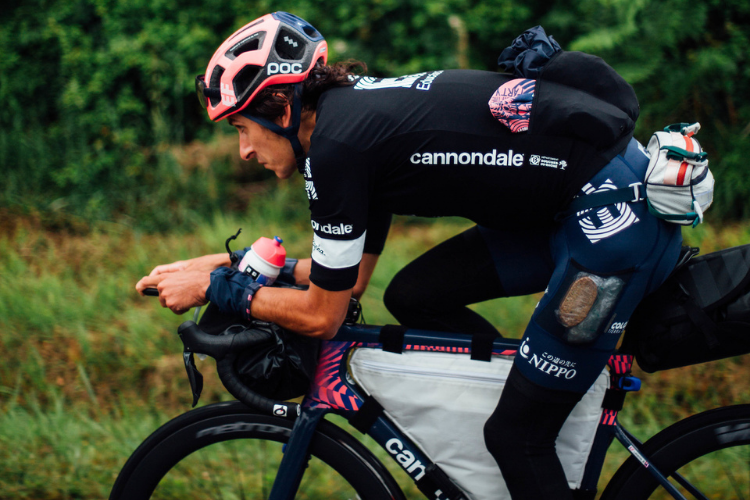 At 5.30am on July 13, a lone and weary cyclist wearing open sandals and carrying camping gear rode out of the dark blueness of a Parisian night and into the impending daylight.

It was the day before Bastille Day on the Champs Elysees, the most famous road in the French Capital. The cyclist was Lachlan Morton, a 29-year old Australian professional bike racer who lives somewhere between Colorado USA and Girona in Spain, and a man whose family originated from Scotland.

Some five days later the Tour de France riders will arrive on the Champs Elysees for the annual grand finale. Amongst the peloton will be Morton’s EF-Pro Cycling World Tour teammates, whose numbers include some of the fastest bike racers in the world.

As the morning commuters went about their bleary eyed business few of them would be aware of the significance of what this cyclist just achieved.

The Tour de France started out in Brittany on July 5th and covers 2112 miles during the 21 daily stages, and there are also two obligatory rest days added to this. The racing is fast and furious, and averages around 25mph overall, and is contested by the strongest riders and teams in the sport.

With an estimated 3.5billion viewers in 2018, the race is known as the biggest annual sporting event in the world, and also the toughest – which is hard to argue.

When the original Tour started out way back in 1903 things were very different, with racers competing on single speed roadsters and racing marathon length stages to cover the 1,508 miles in just six days, and all without the five star luxury support of the riders of today. Even so, the winner covered the distance at an average speed of just under 16mph.

Paying homage to those early days of the race was why Morton now found himself sleep deprived but satisfied on the early morning cobbles of Paris. He had left Brittany earlier on the same day as the race its self on a quest to ride the entire route, plus the transfer stages – but solo and unsupported, carrying only camping gear and essentials.

This total distances combined added up to 3,423 miles, more than 1,300 lonely miles more than his teammates in the race. Along the way he would pedal for 220 hours, camp, cook, wash his smalls, fix his bike, patch up his own wounds and climb more than 213,000 vertical feet on his full laden bike.

As if battling the cruel slopes of the Alps, the Pyrenees and climbing the Mont Ventoux twice wasn’t enough, Morton would end up reaching Paris five days before the Tour peloton, competing the amazing feat of endurance in just 18 days.

Halfway through the ride he was forced to ditch his carbon fibre cycling shoes and clipless pedals and to purchase a pair of cheap and not so cheerful flip flop style sandals from a local supermarket.

Anyone who has ridden a bike semi-seriously will tell you that trying to ride at all in such footwear is ludicrous, let alone riding over the Pyrenees in them.

His feet were in such a state that his only option was to ditch the cycling shoes and leave them open and to patch them up as he went, which was agonising and almost led him to quit at times.

The AltTour (alternative) as it was termed had also £258,000 raised for the non-profit World Bicycle Relief by the time he reached Paris, a figure that is continuing to rise. The organisation provides bicycles to impoverished communities around the world, which in doing so helps hugely in relieving poverty by providing people with a means of transport and thus opportunity.

Ironically it was the Tour de France that inspired Lachlan and his older brother Gus to take up cycling when they were children, and both went on to become professional racers.

At just 19-years-old Lachlan joined the World Tour and looked set for stardom. At that time the harsh structure of pro racing and the long periods away from his family and home didn’t sit well with his youthful and individualistic ideals, and so he turned his back on the big time.

Following some time out and making cycling movies with Gus the pair decided to give the racing scene another go – only at a lower level with a smaller American team. One thing led to another and he re-discovered his passion for racing.

The results followed, and against all the odds he managed to negotiate a second crack at the World Tour. This time around it was on is terms – by incorporating ultra racing, mountain bike epics and other odd ball events which a major team would generally snub their nose at. Lachlan has proven them all wrong – showing that there really is room for an individualist and a wild card in the arena of World Tour professional cycling.

Along with riding some of the biggest road races out there he also mixes in a number of these “alternative” events, with one of the first being the GBDuro in 2019.

That was a 1200-mile self supported offroad races from Lands End-John O’Groats, which he won convincingly. The event proved to be something of eye opener to him – not only in racing style, but also in being introduced to the wilds of Scotland. This is where his ancestors hailed from “It was the most amazing 3 days of riding I’ve ever had” He said of the experience.

Strangely his connection ran eerily deeper, as he told his brother in a podcast “As soon as I crossed the border into Scotland I felt like I was at home. I just had this inner feeling that something would go catastrophically wrong in the race until then. The terrain, the countryside, the people – even the food was stuff I really liked, and yet I’d never been there.”

Hopefully we will see him pedalling through the Highlands again sometime in the future “This is some of the nicest riding I’ve ever had, it is world class” He told me after the event, although he did add that he would prefer to ride it at a more sedate pace, perhaps so as to take in those mystical vibes.