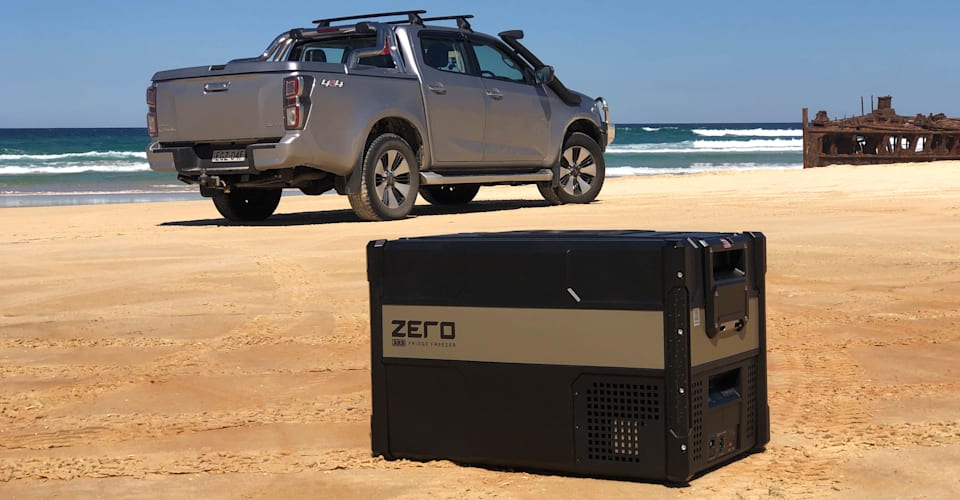 As more Australians hit the road to discover our vast backyard, it pays to keep your cool and be well prepared.

Australians are holidaying at home in record numbers amid international travel restrictions due to the coronavirus crisis.

Holiday parks and motels in far flung parts of Australia are booked out months, and sometimes seasons, in advance.

You can see the convoys in outback Australia on countless traveller pages on Facebook. Often the images are taken from drone cameras, capturing kilometres-long queues at checkpoints, popular sightseeing spots, or remote ferry crossings.

From Cape York to Broome and everywhere in between, it’s getting crowded out there.

More than ever before, adventure seekers need to be able to be self-sufficient when on the road, in case they can’t get into remote accommodation – or end up stuck between a rock and a hard place.

One of the first creature comforts holidaymakers treat themselves to is a portable fridge, especially as few of us can afford a top-of-the-range Toyota Prado or Toyota LandCruiser 200 Series 4WD with factory-fitted chilled centre consoles connected to the vehicle’s air-conditioning system.

On a recent trip to Fraser Island we got to test one of ARB’s new Zero range of portable fridge freezers. We opted for the smallest in the line-up – the 36-litre model – because at 22.2kg when empty it’s more manageable to lift in and out of the car if need be.

At 675mm in length, 292mm wide and 143mm high, it’s the right fit for the back seat of, say, a double-cab ute – only taking up two of the three seating positions (or only one seat if you position it north-south, although the front-seat passenger might need to give up some knee room with that layout).

You can also buy an ARB sliding drawer if you want to mount the fridge in the back of a ute tray or the cargo area of a 4WD wagon, however we favoured the flexibility and convenience of the back seat.

Fortunately, the ARB Zero fridge can easily handle the slight angle of the back seat’s lower cushion, without upsetting the refrigerator’s internal components, efficiency, or access to fresh air.

Positioning the fridge on the passenger side of the vehicle – with the lid-opening latch facing the door, for easier access once stopped – we were able to leave ample space around the vents for the fridge’s internal cooling fan, and could easily see and access the digital display and connections at the base of the fridge, handy when switching from the car’s 12V power to ARB’s portable battery pack.

There’s one other piece of genius tech that goes with the new ARB Zero series of fridges: Bluetooth connection so you can see what’s going on from the driver’s seat, and without having to lift the lid and let cool air out.

Once you download the ARB Zero app on your Apple or Android smartphone (we had an Apple iPhone 8), simply flash the barcode that comes with the fridge to establish a connection.

From there you can monitor the fridge temperature, or adjust it at the touch of a button.

While this particular ARB Zero fridge is single zone, it has the option of being a fridge or freezer (temperature range is minus 22 degrees Celsius to plus 10 degrees Celsius).

For this test we used it solely in fridge mode, initially setting the temperature to 2C before tapping it down to zero 0C.

The cooling speed of the fridge itself was incredible, routinely taking between just 15 and 20 minutes to bring the temperature down from 18C to 0C.

It took longer than that to cool the contents (such as a water bottle at room temperature), but anything that went in already cold (such as yoghurt) stayed cold.

In fact the fridge stayed so cold (sitting on 0C or 1C), I bumped the temperature back up to 2C so my teeth didn’t ache after a drink of water.

The optional portable battery pack – which attaches to the side of the ARB Zero via rubber-covered magnetic pads and powers the fridge via a short cable – proved itself to be a lifesaver numerous times.

Because we didn’t have a second vehicle battery hooked up to the Isuzu D-Max, we ran the fridge on the ute’s 12V power via the socket in the cabin when the car was running during the day, and then ran the fridge on ARB’s portable 15Ah lithium-ion battery pack when parked at night.

ARB estimates the battery pack has enough juice to run the 36-litre fridge for 18 hours. We ran the fridge off the battery pack for 12 hours straight and still had one bar of juice showing.

During our run to Fraser Island for a Jet Ski ride for the Variety children’s charity, the fridge came out of the car on extended stays but stayed in the vehicle on overnight stops.

The battery pack must be charged on household AC power (or a suitable inverter or generator). It cannot be charged off the 12V socket in the vehicle as it would draw too much current.

So when the battery pack needs charging, you need to pull the fridge out of the vehicle if you want to keep it cold.

That said, on cool nights we left the fridge in the car and didn’t open the lid, and it kept most of its cool overnight, only climbing to 5C by the morning.

The ultimate set-up – if the budget stretches that far – would be to have two portable and rechargeable ARB battery packs.

That way, you can charge one while the other stays in the car running the fridge overnight.

It’s easier to grab one 1.65kg battery pack than lift the 22.2kg fridge out of the car. And the battery pack only takes five to six hours to charge from dead empty.

The battery pack is also IP66 waterproof and dust proof, so it won’t get damaged if it gets rained on, or covered in dust.

We also used the ARB battery pack on another adventure to power colleague Sam Purcell’s larger ARB fridge-freezer, which it did without fuss.

We ran it all day in the bush during our recent off-road 4WD mega test, and it only sapped half the battery pack’s reserve of energy.

Having never travelled with a fridge before (I’m the bloke always looking for bags of ice to refill the Esky at every servo we pull up at), the ARB Zero is life-changing.

Being able to check and adjust the temperature via the phone app is genius in its simplicity, and makes you wonder why this hasn’t been done before.

Also cleverly designed are the two removable and reconfigurable baskets that allow you to maximise space in the fridge itself.

The fridge also has a USB port so you can, via a cable, charge your phone off the fridge, while it is being run off the battery pack or the car. Genius.

The other big surprise: how quiet the ARB Zoom fridge is. It’s so silent I found myself checking the app to make sure it was still running.

Sometimes the reconnection between the phone and the fridge can take a minute or so after stopping overnight, but it just requires some patience. It has connected every time in our experience thus far.

I’m tempted to consider a bigger fridge for bigger adventures, but to be honest I reckon this 36-litre unit is all most people will need. I love the added convenience of being able to grab it out of the car and use it as a picnic bench, in the bush or at the beach.

My next investment will be in a second identical battery pack, so that I can just swap out the battery packs and charge one each night while the other is quietly powering the fridge in the car.

Now, if someone can give me some tips on how to get rid of the smell from my mate’s ham, mustard, and chutney sandwich out of a brand-new fridge, I’d be ever so grateful.