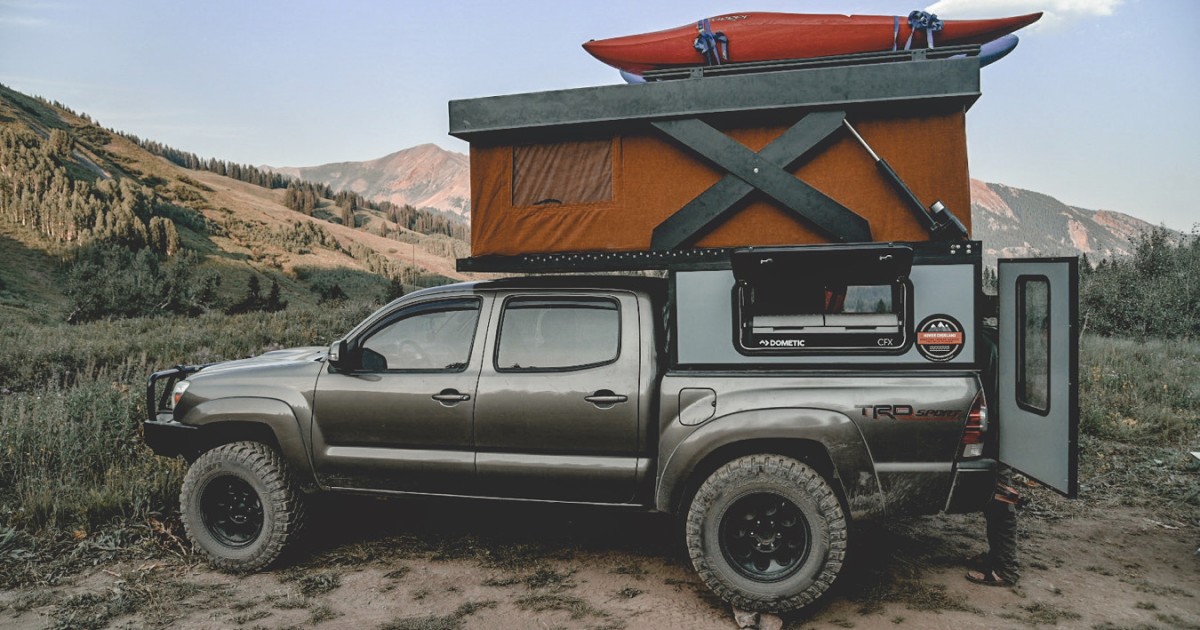 At Overland Expo West 2019, we spent some time looking over a high-lifting pickup topper from Oregonian startup Hower Overland. The model stood out from the pack due to its towering height, rough prototype construction and snorkel-breathing two-door Land Rover Defender pickup base. Two years later, the Hower Built Base Camp still stands out for its height but is now a polished any-pickup camper capable of sleeping two people and holding up to 300 pounds of gear on its electric-lift roof. It seems a natural fit for adventurers who chase every last sliver of daylight before pulling off the dirt track for some shut-eye and starting all over again at first light.

The model that we looked over at OX 2019 was Hower’s second prototype, a larger alcove version of its original boxy wood pop-up that didn’t extend over the driver’s cab. Hower explored corner lifts with that second prototype before ultimately going back to a scissor lift system. The electric lift is wired to an included 100-Ah lithium battery, providing fast, effortless setup.

The Base Camp is a pickup topper, not a fully enclosed camper, so it secures to the bed rails and keeps the pickup bed largely open and available for storing things like camping and sports gear, coolers or slide-out kitchen equipment. The full-width double doors pictured create a wide entry for loading, and Hower also offers alternative rear door options for those who want to keep the truck tailgate in place.

Step inside, and the high-rising Base Camp roof provides 6.4 ft (195 cm) of standing height. The sleeping platform inside the UV-resistant waterproof-breathable tent canvas comes topped with a 3-inch-thick (7.6-cm) mattress. Since the Base Camp relies on a battery for roof operation (a manual version is not offered), it comes standard with a basic electrical system with LED lights and interior 12V and USB outlets. It’s also prewired for solar.

The Base Camp’s 300-lb (136-kg) rooftop weight capacity separates it from other pickup toppers that offer lesser capacities or no option for loading gear on the roof. For example, both the Atlas and Summit toppers from AT Overland are limited to 100 lb (45 kg) of gear when open. The Go Fast Camper handles 75 lb (34 kg) when popped.

Hower’s higher weight capacity gives owners more leeway in loading things down and opening the roof up without having to remove anything. Pull into a primitive camping spot after dark and be in bed in minutes rather than fussing around unloading gear and cargo. Or, if you do unload that gear and cargo, you can use the popped roof like a lookout deck, as 300 lb is more than enough to support an average-sized person and maybe two people.

Unlike manufacturers that build pickup toppers for specific trucks, Hower says it will custom-build the Base Camp for most pickup makes and models, including upcoming electric pickups, which will allow it to wire the electric lift system directly to the truck battery. Dimensions and weights will vary accordingly, but Hower lists base weight at 400 lb (181 kg), a little heavier than the 300 and change of some other toppers but less than half of what you’d have with some of the lightest complete pickup campers out there. Hower builds the Base Camp with composite panels atop an aluminum frame.

The Base Camp starts at US$13,000, and Hower offers additional add-ons including kitchen build-outs and solar panels. It is currently developing a flatbed camper and also specializes in camper van interiors.