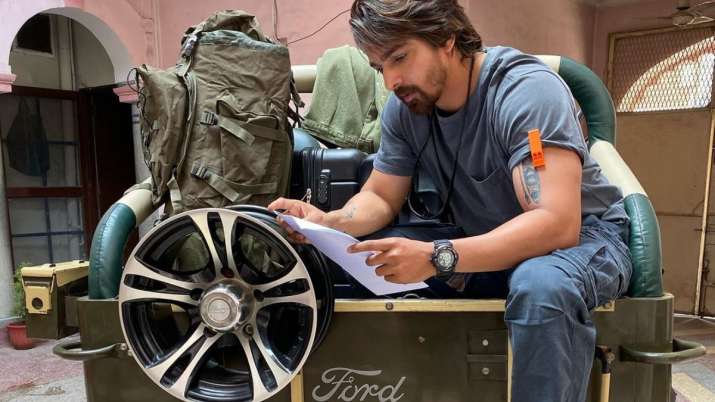 Actor Harshvardhan Rane took to social media on Wednesday and shared pictures of his first day on the set of the film “Haseen Dillruba”. In the picture post, Harshvardhan is seen sitting in the rear of an open jeep with camping gear, deep in thoughts with the script in his hand. He is dressed for shot in a blue T-shirt, blue cargo pants, and brown shoes.

“Behind the scene #HaseenDillruba, my first day on set! #Nervous (take a deep breath),” wrote the actor on his Instagram page.

Harshavardhan played Neel Tripathi in his fourth Hindi film, “Haseen Dillruba”, starring Taapsee Pannu and Vikrant Massey. The film is pitched as a mystery thriller, and the gritty trailer set against the backdrop of a smalltown runs a fast-moving collage of sequences highlighting “Lust”, “Obsession” and “Deceit”.

Directed by “Hasee Toh Phasee” maker Vinil Mathew, the film tells the story of a young woman who is a prime suspect in her husband’s murder. As the investigation reveals details of her marital past, the truth starts getting even more baffling. The film is set in a small town by the river and rafting plays an integral part of the story. Earlier, Mathew had revealed shooting amidst the rapids meant they could not load heavy camera equipment in the raft.

Coming back to Harshvardhan, the actor who has also worked in several Telugu films is looking forward to his upcoming film “Kun Faya Kun”, director Kushan Nandy opposite Sanjeeda Sheikh.

‘Haseen Dillruba’ can be streamed on Netflix.