One French ski team summited the first 8,000m peak of the season today. And another succeeded on a notoriously dangerous 7,000’er.

The skiers are still descending, so details will have to wait, but their trackers confirm both summits. 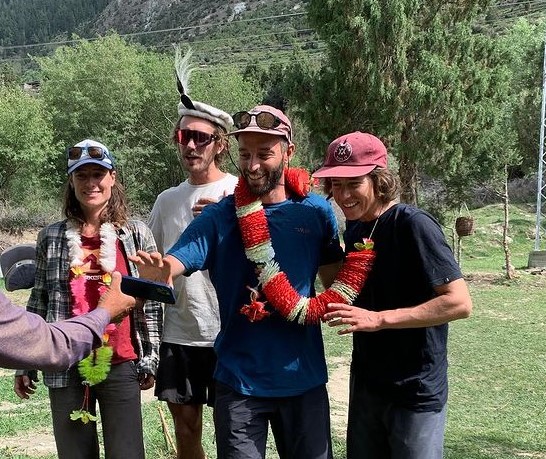 Alpine Adventure Guides has also confirmed that Boris Langenstein, Tiphaine Duperier, Aurélia Lanoe, and Guillaume Pierrel reached the summit of GII today. Pierrel’s tracker confirms that at least he was on the summit today. 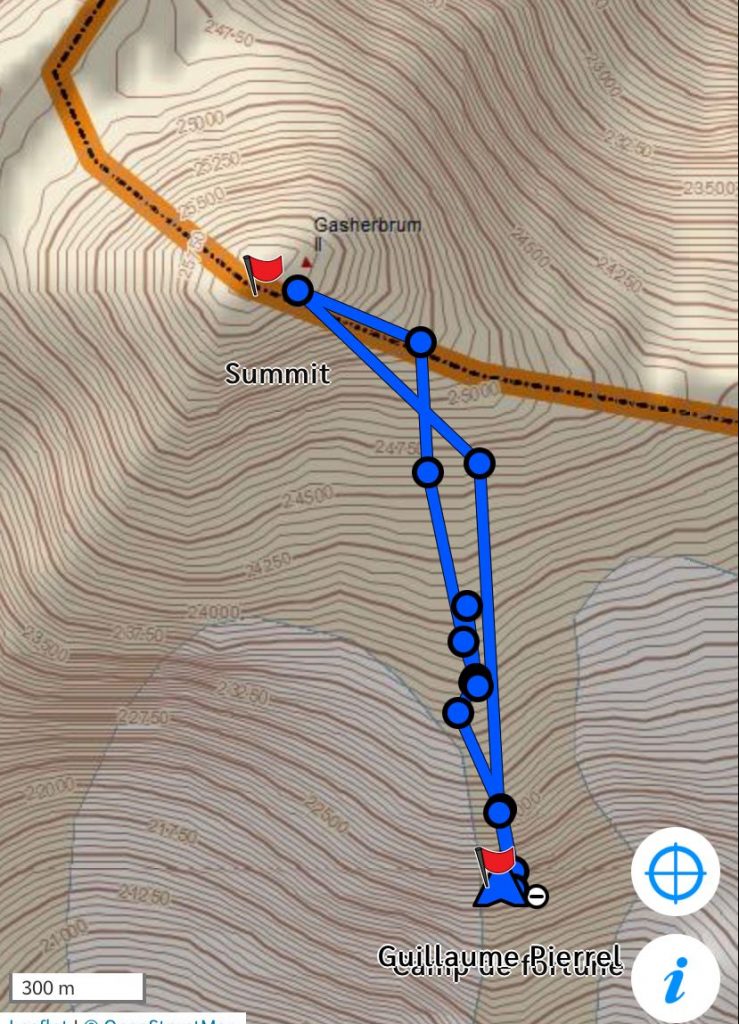 The foursome climbed Gasherbrum II with impressive speed, breaking trail most of the time. At the beginning of July, they carried gear up to 6,600m. They then waited for good weather, as Guillaume Pierrell explained on IG. His post includes some stunning pictures.

The tracker also shows that the climbers stopped at what they called “Camp du fortune”, meaning an improvised camp or bivouac at 7,000m. That is the altitude where GII teams usually set up Camp 3.

Ali Saltoro of Alpine Adventure Guides told ExplorersWeb that the entire team summited and then skied down to Camp 1, thus making a full ski descent of GII. Camp 1 is on the glacier, at the junction of both Gasherbrums.

AAG has a 13-member team on the Gasherbrums. One of the clients, Pawel Gossiak of Poland, came down with pulmonary edema and was evacuated yesterday. “Another eight members have fixed C3 and are now resting at Base Camp,” Saltoro said.

“Summit” reads the one-word message posted today by Hélias Millerioux. His tracker put him on the summit of Diran Peak.

Milleiroux and partners Yannick Graziani and Patrick Wagnon are a strong French climbing and skiing team. Earlier in the season, the trio showed up in Pakistan, near Batura Muztag. Early rumors suggested that they were eyeing Shispare, but Millerioux himself quickly contradicted that.

“For the moment, we are just hiking in the area,” he said. In fact, the team was already planning to climb Diran, a peak not far from Shishpare, but asked ExplorersWeb to keep the information off the record. 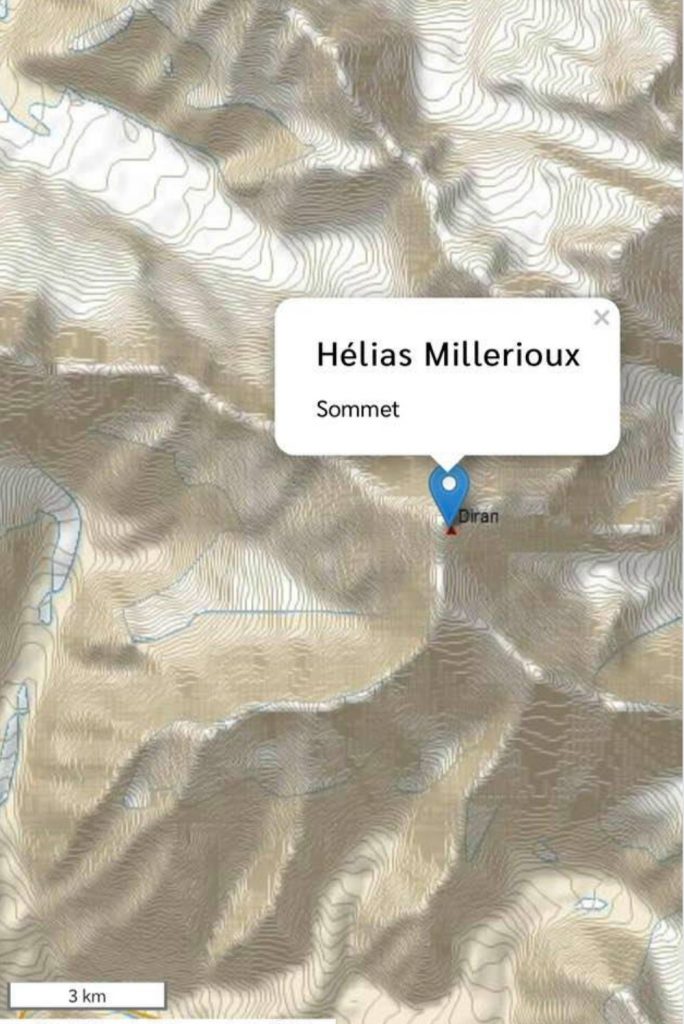 Helias Millerioux’s tracker at the summit of Diran.

Diran Peak, 7,266m, has a well-deserved reputation as a dangerous mountain. An Austrian team first summited it in 1968, but many others have failed, some catastrophically. Avalanches frequently rake its flanks.

“Three Spaniards disappeared during an attempt in 1979, and several other teams have had bad luck on that mountain,” mountain blogger Kris Annapurna told ExplorersWeb. 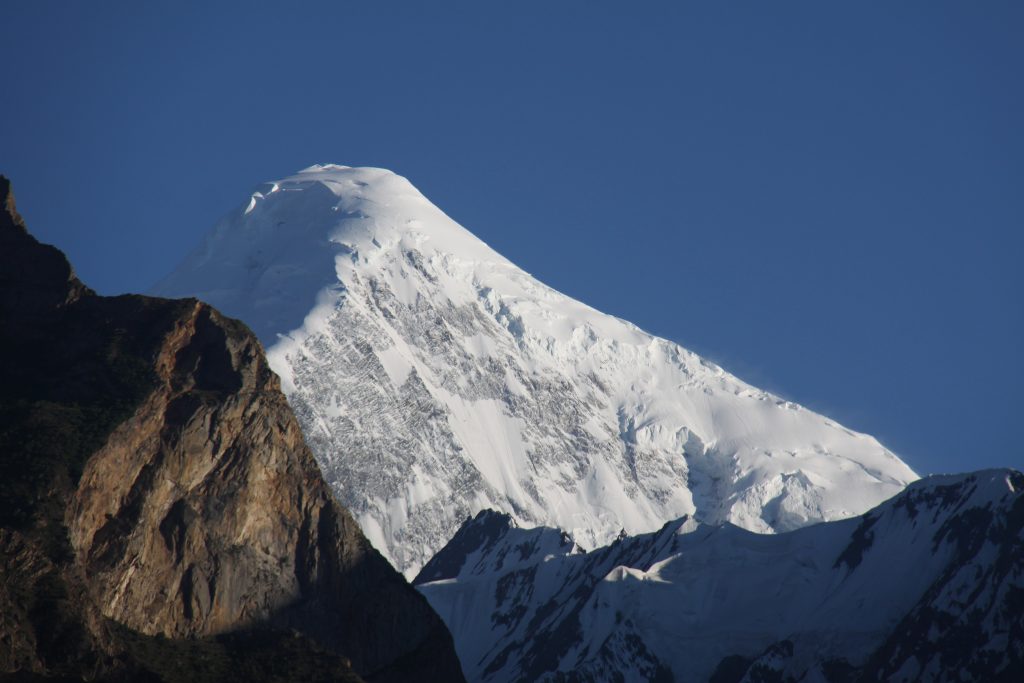